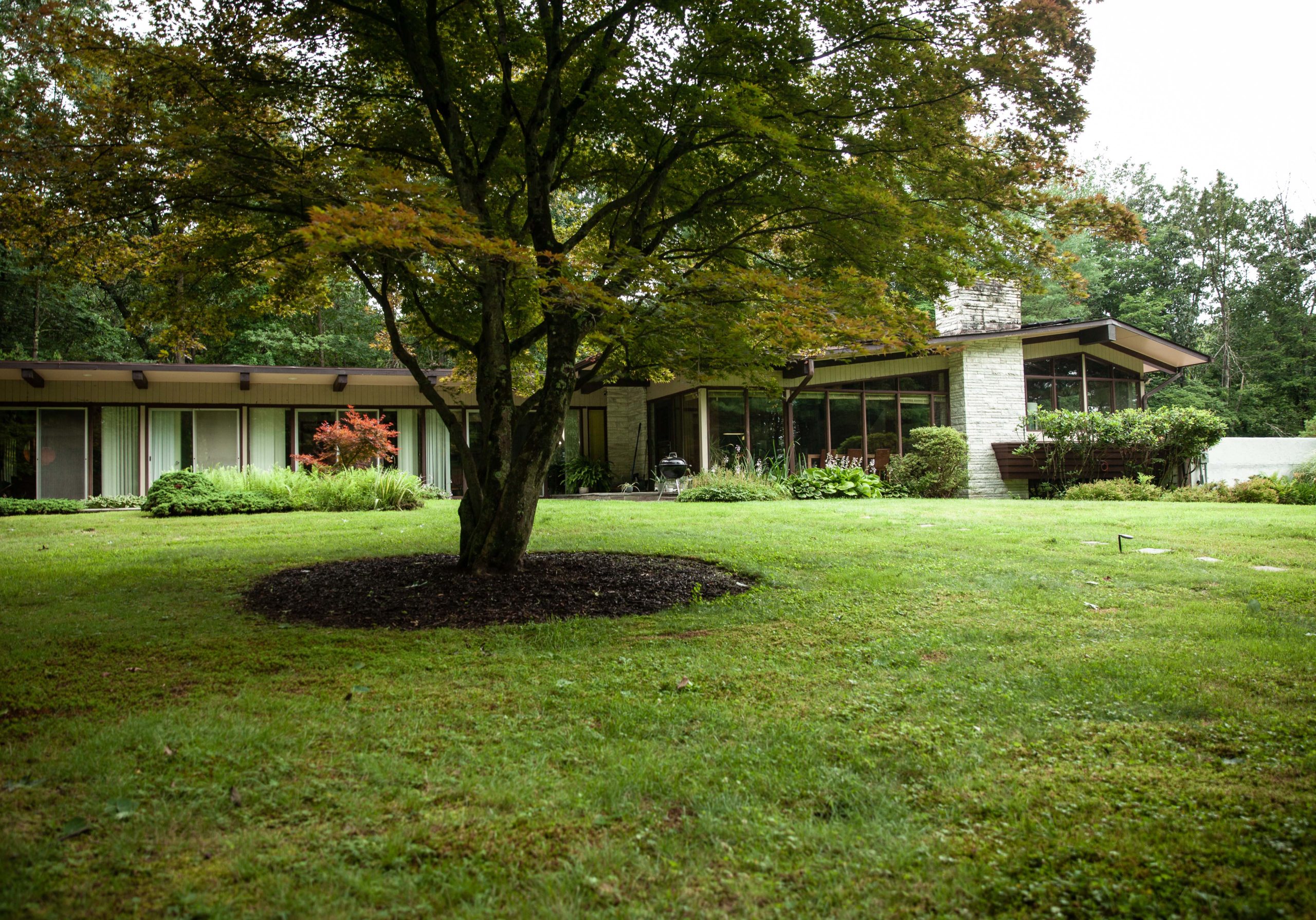 “The joke is that I was looking for a one-bedroom A-frame in the woods for me and my cat, and I somehow ended up with a 4,200-square-foot Mid-Century time capsule with a jazz club in the basement,” says Nick Gordon, resident-owner of the Mod House, a “bed ‘n’ booze” at the base of the Gunks in Ellenville.

Although it wasn’t where he was looking or what he was looking for, when Gordon found the Mod House at the end of 2019, the music industry veteran knew he was on to something. “I lived in Brooklyn for the last 20 years. I had always fetishized the concept of the Catskills and the scene in the ’40s, ’50s, and 60s,” he says. “My dream had always been to open a big hotel and have big bands and a comedy scene and do that whole thing but through a modern, Brooklyn lens. But it was hard to imagine ever being able to get that off the ground.” 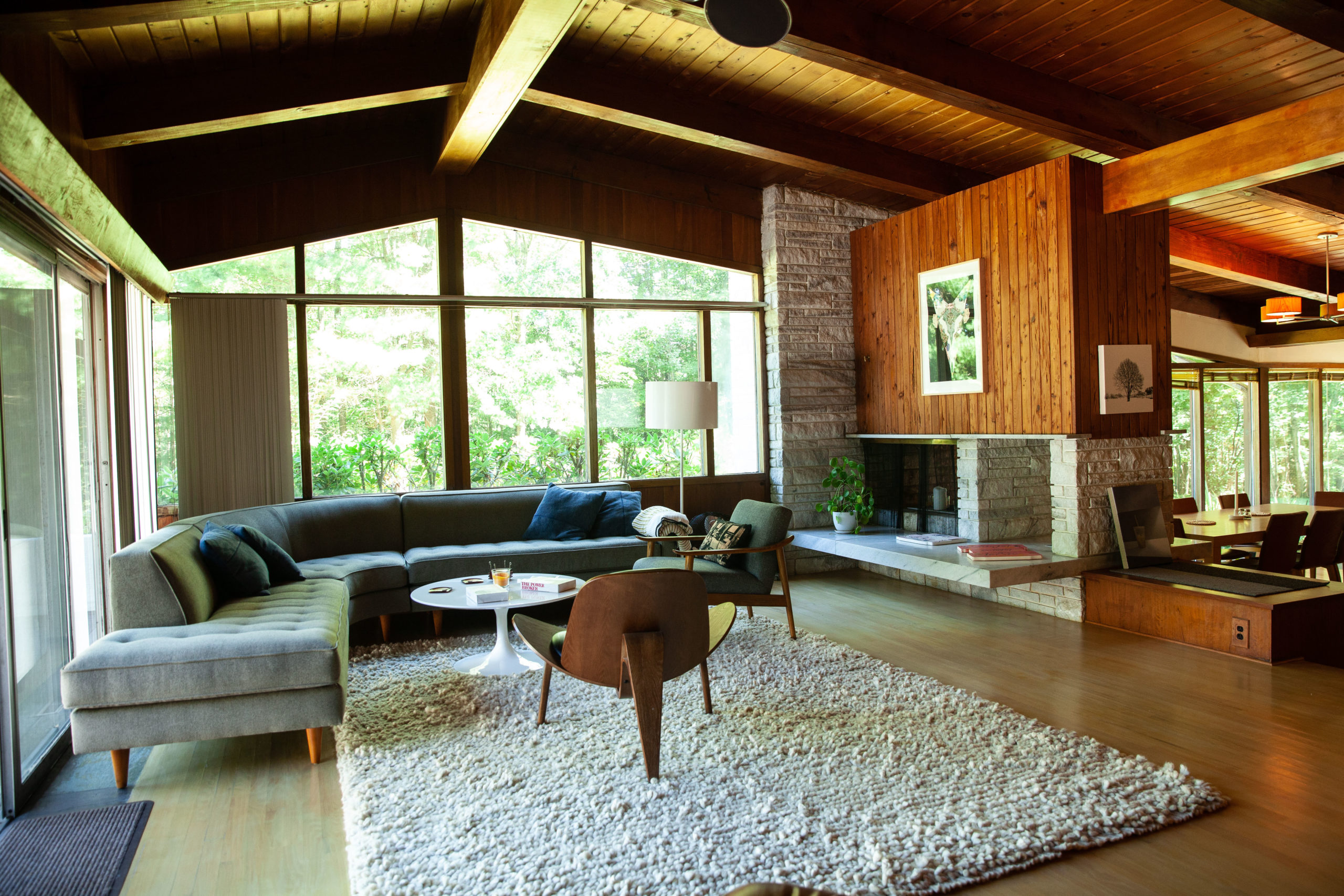 Though perhaps not the Borscht Belt resort of his dreams, the Mod House rekindled this vision for Gordon, lending it a slightly different shape and scope. Built in 1964 by architect Dick McDole for himself, the home sits on 3.1 acres and encompasses a whopping 4,172 square feet, including a 2,000-square-foot basement, where Gordon’s pop-up speakeasy, Love, Velma takes place once a month. McDole didn’t leave a very prolific paper trail, but he did build several houses in the area—enough, anyway, for Gordon’s street to be named after him—taking cues from Frank Lloyd Wright and other storied architects of the period.

“He certainly spared no expense for himself,” Gordon says. “It was absolutely built for entertaining.” But all McDole’s indulgences—the two-sided fireplace, vaulted ceilings, and walls of glass—weren’t enough to keep him there, and he only lived in the house for a few years. “Rumor has it that it was then lived in by an eccentric Japanese couple, who threw fabulous swingers’ parties,” Gordon says, clearly relishing the rich lore of the building. 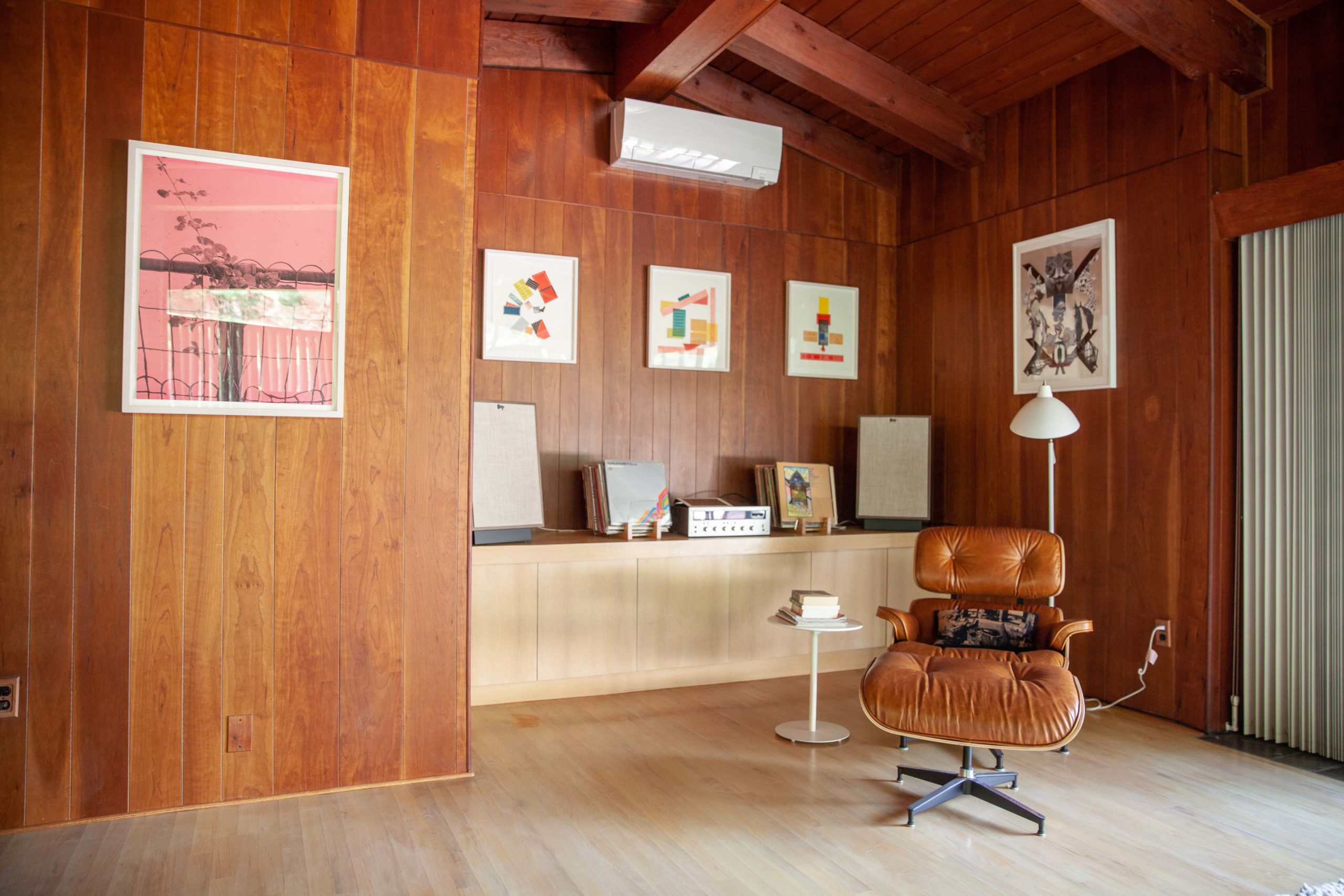 This couple stayed in the home until 1990, when they sold it to another Japanese couple, who in turn sold it to Gordon in 2019. “The top floor of the house was in amazing condition. With the two couples before me, I think no one had worn shoes here since 1969,” Gordon says with a chuckle. He put on a new roof, installed solar panels, and transitioned the house from oil to air-source heat pumps to make the house more efficient. Mold had formed in part of the basement, which he had to demo and rebuild. “I ripped out all the walls and floors. All that was left was the bar, which was original, and the brick floor,” he says.

As for the rest of the space, Gordon, a self-proclaimed “interior designer by hobby,” had a blast outfitting the home’s massive interior with period-appropriate furniture, trolling local antique shops, garage sales, and online auction sites. “It has been a joy for me—a pain on my credit card—but a joy for me. I love Mid-Century Modern, so it’s been unbelievable,” he says. “Scouring the country for cool lamps is just sort of what I do when I’m drinking a glass of wine at night.” 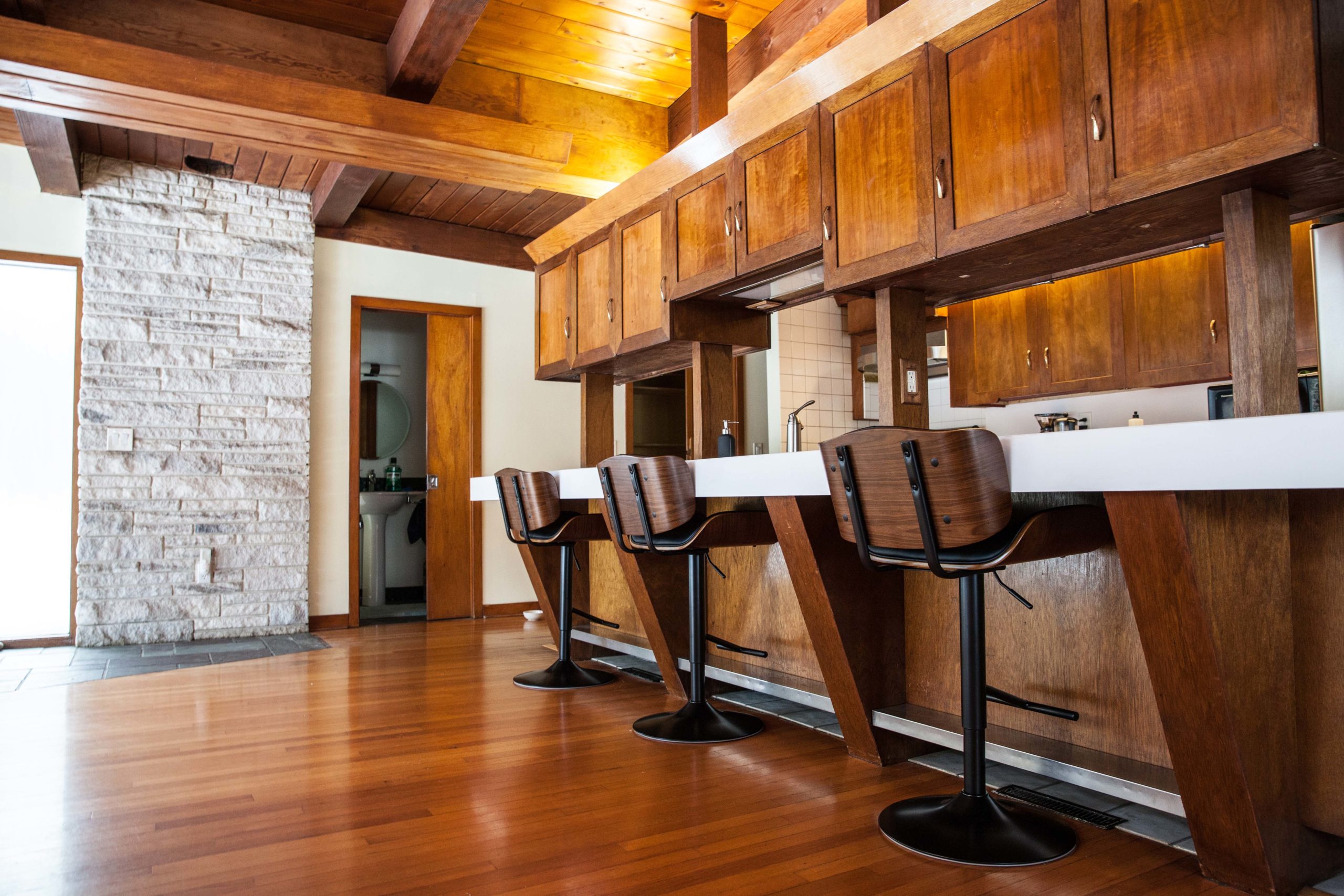 The house itself offers 270-degree mountain views and is situated about a block from the Shawangunk Ridge State Forest. Gordon did much of the exterior landscaping himself during the pandemic, creating a lush, three-acre paradise that feels utterly secluded while being just five minutes from downtown Ellenville. “Because of the pandemic, I was able to work from home,” Gordon says. “I never thought I would have this much time to spend just working on the house, but I ended up having that amazing gift.”

In June, Gordon opened up the Mod House for booking as a sort of communal lodge. He rents out two, sometimes three, of the bedrooms through Airbnb and lives out of the fourth with his cat Neala and rescue dog Puddin. “There are definitely community vibes—the whole house is shared space,” Gordon says. “I call it a bed ‘n’ booze. Guests get free wine and beer all weekend. The top floor has tons of couches, Eames chairs, and a HiFi stereo system. Outside, there are three acres with places to sit and work, or read, or do nothing. Downstairs is set up as a speakeasy with a full bar and stage.” 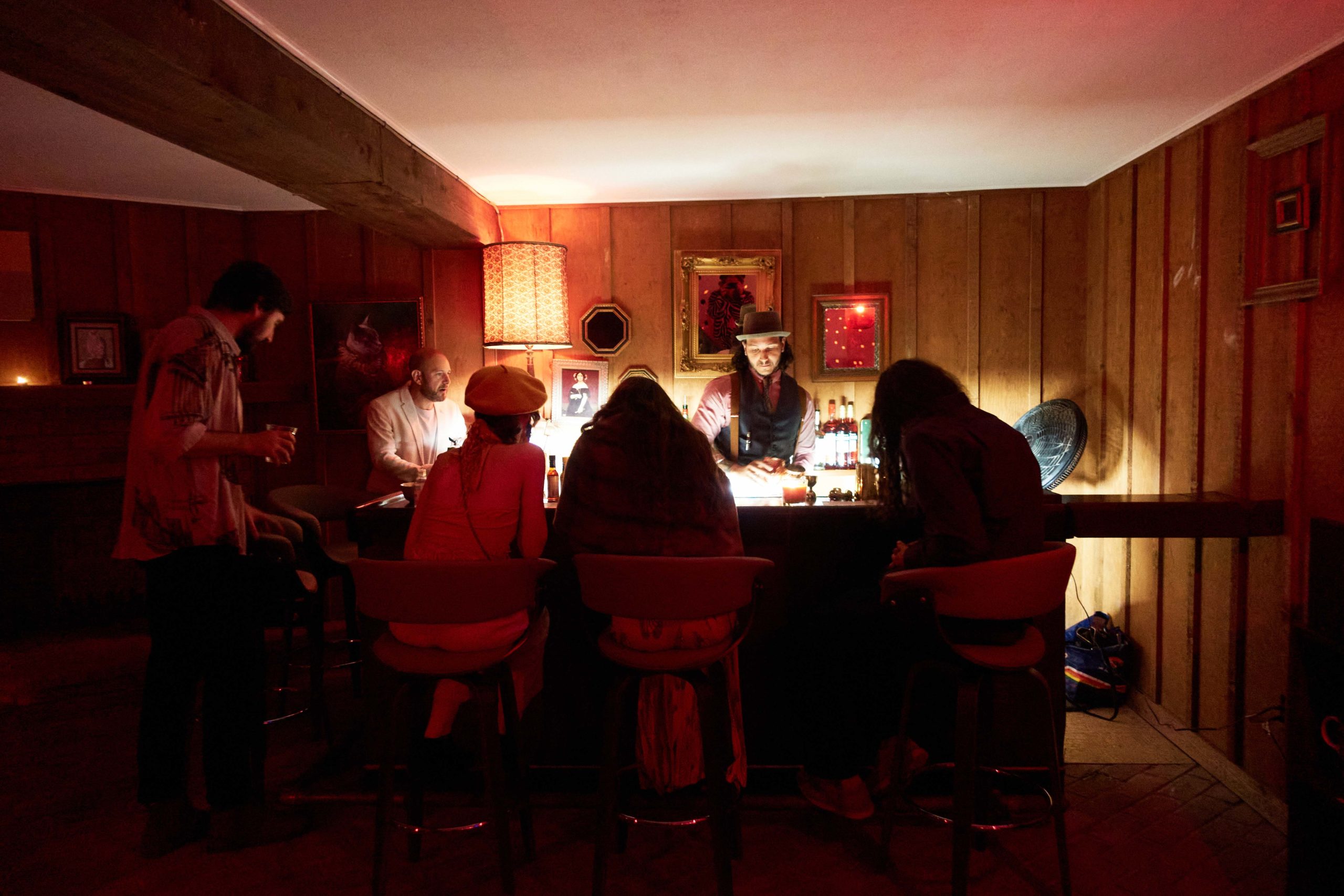 Gordon has spent the last 25 years working in music distribution, marketing, and talent management in genres spanning from jazz to hip hop to electronica. Not long after he opened the Mod House for booking, he launched the monthly underground jazz pop-up series, Love, Velma. Leveraging his professional connections and offering musicians a place to stay, Gordon is able to entice world-class talent to perform at his spot. “In order to get bands I want, I am putting them up,” Gordon says. “It is a destination experience. The musicians know they get to spend the whole day here, hang out outside, chill, practice, and then they get to play a show and go upstairs and sleep.”

Gordon used Instagram and word-of-mouth to build a following for these events, of which he’s hosted four to date. “Love, Velma has been attracting people to Ellenville,” He says. “We are sending people to local restaurants with discounts. There is definitely a feeling of excitement that it is bringing new energy to the area.” 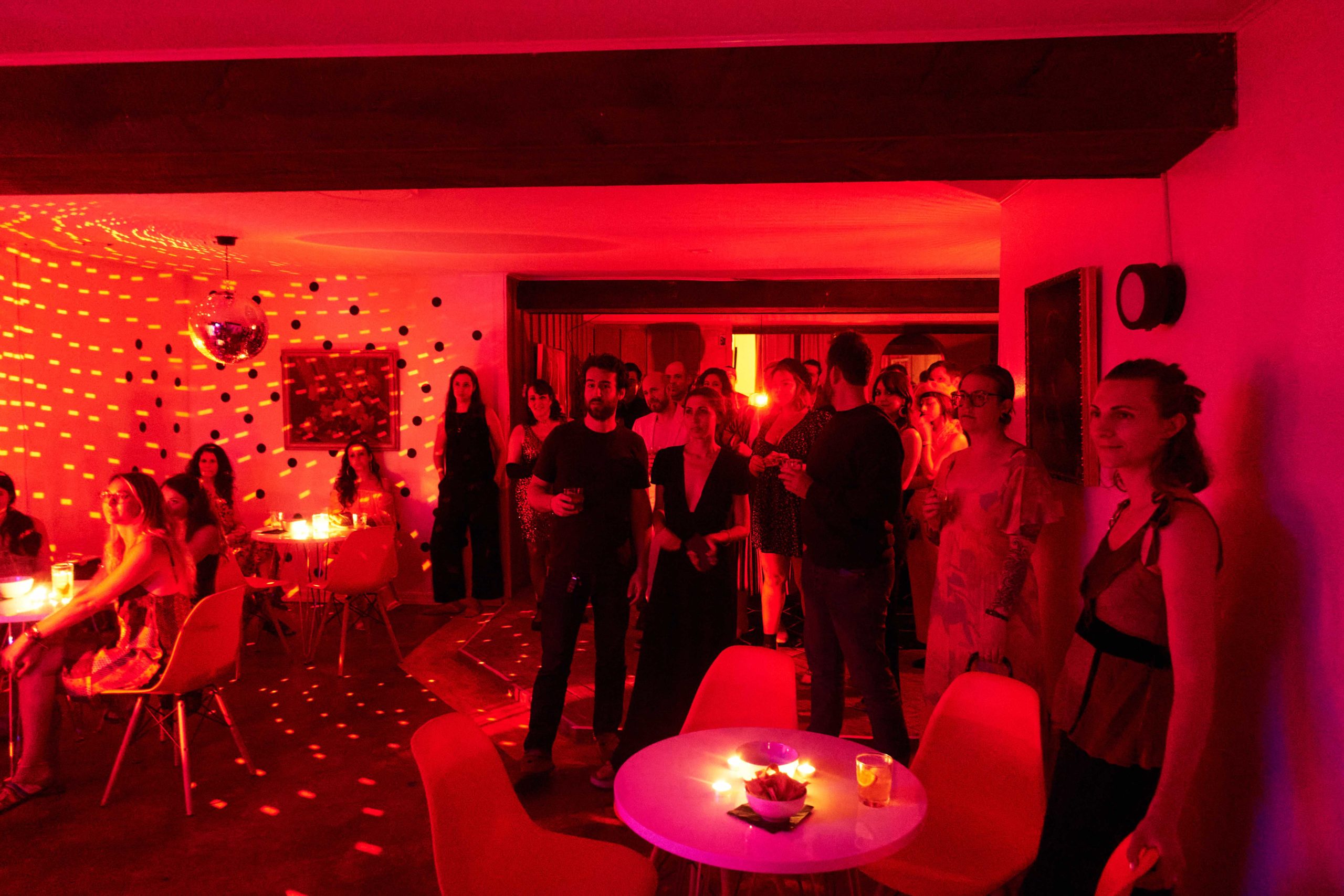 The basement’s diagonally laid vintage brick floor gives the space a fabulous, old world feel, which is tempered by the colorful Mid-Mod furnishings and the rustic board-and-batten walls. There is a brick fireplace, plush rugs, playful artwork, and the original 1960s wooden bar. “The joke is that Ellenville doesn’t have a proper bar, so I’m sort of killing an ant with a laser,” Gordon says. “But I built the bar I wanted to go to, and it’s fucking cool as hell. And it’s attracting the right audience—a lot of local musicians and artists.”

A besuited, bowtied Gordon emcees these evenings, where guests range from 25 to 70 years old and many come dressed to impress. (Sequins, gowns, feather boas, and hats all make an appearance here.) For the Love, Velma events, which can get a bit boozy, Gordon hires locals to drive guests back to their homes and hotels. 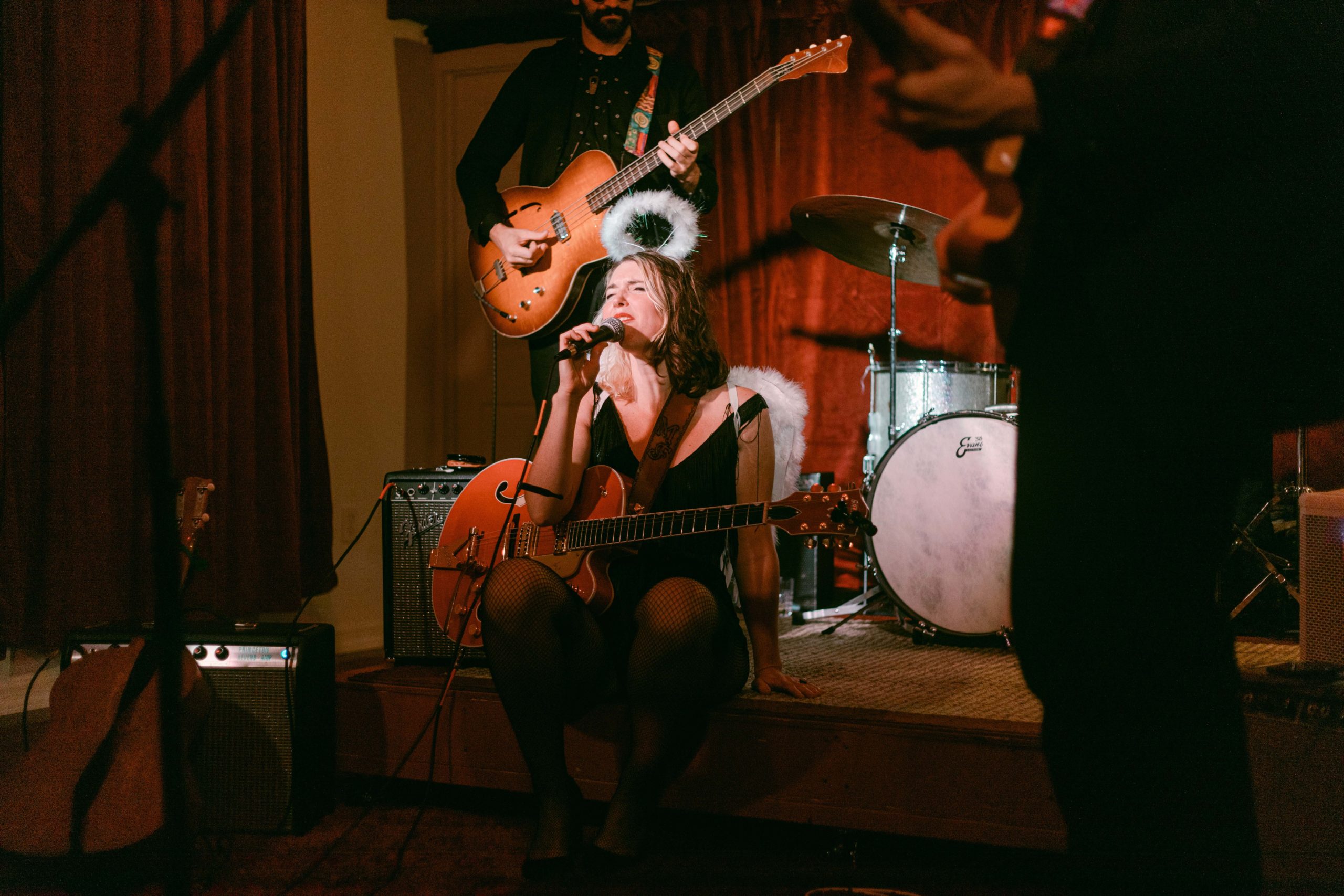 In addition to jazz performances by musicians like Wayne Tucker and the Bad Mothas, Tamar Korn, and Sweet Megg, Gordon has hosted live dance parties and group art shows, featuring artists like Leslie Kerby, Juan Hinojosa, Erik Hougen, and Natalie Capannelli. In the future, he looks forward to the Mod House property being used as a space for readings, art openings, food events, film screenings, a cocktail club, classes—you name it. “I want it to be a space for the creatives around here to do their thing, whether that is a reading or an exhibit of their work,” Gordon says. “I want to bring people together that are making and doing things and create a space where we can all share what we are working on.”

The coming year will bring two weddings and a slew of other private events to the property, though Gordon isn’t planning on that being a primary revenue stream going forward. “We’re booked pretty steadily and guests are starting to mingle—it’s all starting to work,” Gordon says. Eventually he plans to find another place to live so he can rent the entire home, but for now he’ll continue being the Mod House’s consummate live-in host. “It’s a very impractical place for a single man and his two animals to live,” Gordon says, “but it’s been quite a fun laboratory.”