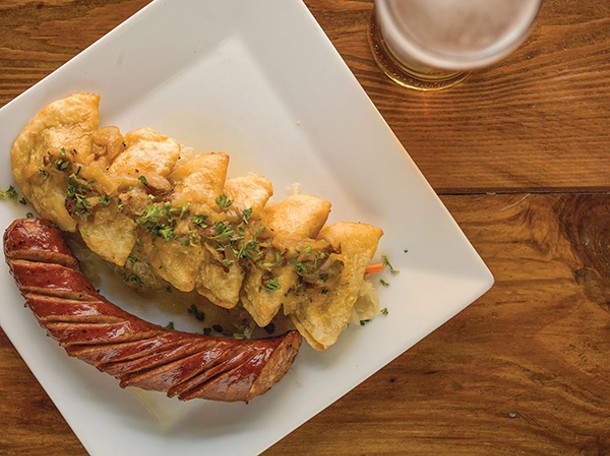 Saturday nights in Catskill are still relatively quiet—unless you’re at the New York Restaurant, where the libations are flowing, the house band is rocking, and the wait for a table is 25 to 30 minutes without a reservation.

Located on Main Street in the historic-yet-perpetually-up-and-coming village of Catskill, the New York Restaurant offers live music, a full bar, and classic American and Polish cuisine—also known as “stick-to-your-ribs” kind of food. If you’re looking for gourmet food that’s light and airy and leaves you raiding your refrigerator when you get home, move along. If you want unpretentious, delicious, affordable food that could last for potentially one or two more meals, this could be your next favorite spot.

The hefty half-pound New York burger ($11.50), served with a steak knife sticking out of its warm sesame bun is as flavorful as any burger in a five-star restaurant. Many of the appetizers, like the pierogi ($6.50) and Polska Kielbasa ($10.50), are almost meals to themselves. But it’s more than the rich and hearty food that draws people here—it’s also the casually elegant, nostalgic yet alluring vibe that reminds one of both an Eastern European pub and an eccentric grandmother’s parlor. 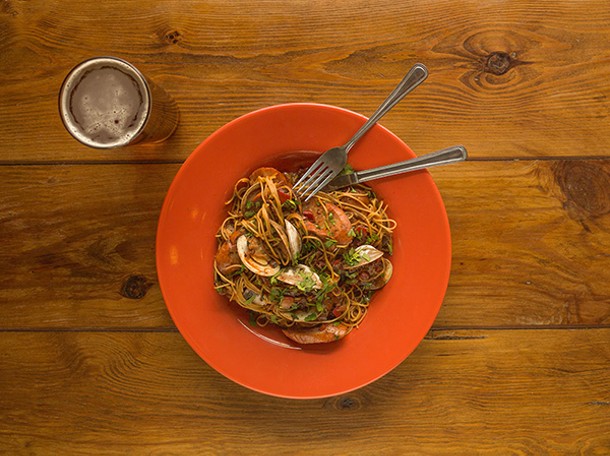 This is intentional, of course. Owner Natasha Witka conceived and designed the restaurant to be an extension of her living room, which, as the child of Polish immigrants who settled in Catskill when she was five, was full of family, friends, and food.

Witka credits her babcia (grandma) for teaching her authentic methods and styles of old world cooking, and her aunt and uncle, who own Pyza, a Polish restaurant in Greenpoint, for teaching her about the food industry. During summer breaks from high school and, later, college years in New York City (she studied business and law at Pace University), Witka worked her way up at Pyza, bussing tables, working in the kitchen, and doing everything in between, in order to soak up as much knowledge as possible before returning to Catskill to pursue her own dreams after graduation.

“As early as I can remember, I’ve always wanted to have my own restaurant,” recalls Witka, now 30 years old. “My whole vision was to create something comfortable, warm and inviting, that was casual but had a statement of class.”

She bought the 150-year-old building that houses the restaurant in 2014. It had been vacant for nearly a decade. “It was in such bad condition that the village was ready to condemn the building, but something just kept calling me there,” she says.

As far as Witka knows, the location has always been a tavern, pub, or restaurant. In fact, in 1922 it opened as the New York Restaurant (a photo of the original establishment is on the restaurant’s website). Witka decided to re-birth the name when she opened in October 2015 after a grueling year of renovation that included repairing the collapsing roof and cracked sewer lines, as well as preserving a 120-year old freight elevator in the sidewalk once used to bring in ice. She installed a piece of walkable glass over the old elevator, so people can see it before entering the restaurant.

“Preserved history connects people,” says Witka, who furnished the restaurant on a budget by shopping at local auctions, salvage yards and with the help of Deb Parker of Sister Salvage, a popular antique and vintage shop in nearby Hannacroix. 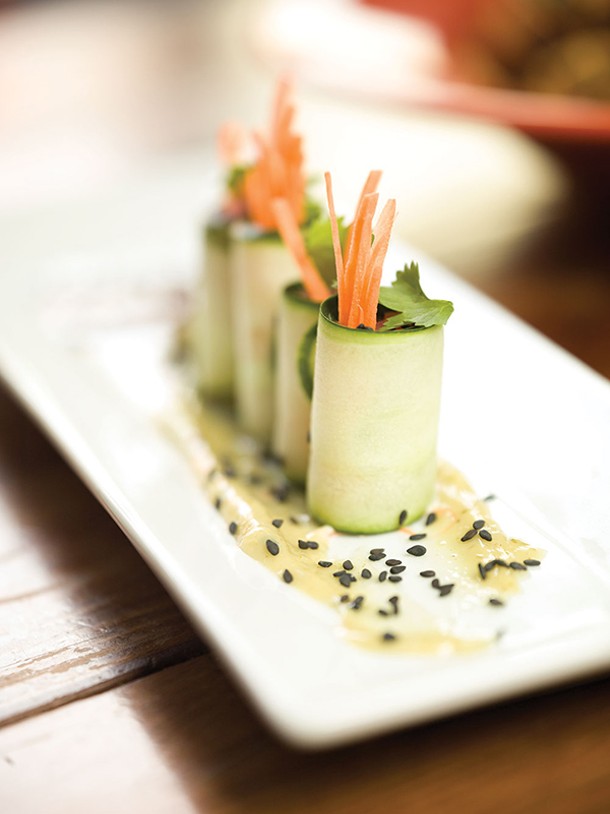 Diners sit at candlelit tables made of repurposed wood on soft leather benches lined with pillows, surrounded by old world charms like exposed brick walls and cream-colored tile floors (both original to the first New York Restaurant), and a gallery-style wall of vintage mirrors near the bar. There’s another wall display of old farming tools in the vestibule outside the restrooms.

For the food, Witka turned to high school friend, Zachary Stough, a self-taught chef who learned his trade by working his way up through the ranks of the Catskill resort industry. Natasha’s aunt and cousins flew in from Poland to teach Stough how to make some of the classic Polish dishes that are now house favorites, like pierogi ($6.50 appetizer, $17.50 platter) stuffed with sauerkraut and wild mushrooms topped with bacon, onion chutney and sour cream, kielbasa ($10.50) topped with house sauerkraut, and golabki ($18.50) stuffed cabbage rolls served on creamy mashed potatoes.

If you can’t decide which of these to get, there’s always the Tour of Poland ($19.50), which comes with all of the above plus bigos, a hunter’s stew made of cabbage, kielbasa, kraut, mushroom, tomato, and stewed with bones. (The portion is large enough to sustain you for days).

In addition to the classic American and Polish fare, Stough also offers a dozen weekly specials that change with the seasonal harvest. Currently, the delightfully fresh and tangy spring salad ($11) with watermelon radish, shaved fennel, strawberries and marinated chickpeas in a lemon poppy vinaigrette is a must-try—even for those wary of mixing fruit with greens. Another worthy special is the savory shrimp noodle bowl ($22), made of blackened ginger and star anise broth, gulf shrimp, vegetables, fried egg, garlic chili paste, cilantro, and lo mien noodles.

Vegetarians might be surprised that the nonmeat options are some of the most popular dishes on the menu, including the crispy Brussels sprout chips ($9.50), which are sprinkled with truffle oil and parmesan cheese and practically melt in your mouth, the lightly fried cauliflower wings ($11.50) smothered with “secret” Buffalo wing sauce that renders the cauliflower crunchy on the outside, soft on the inside and spicy, and the vegetable-and-quinoa-stuffed peppers ($17.50) drizzled with arugula pesto and goat cheese crumbles, the vegetarian alternative to the golabki.

While the Polish meats are sourced from Greenpoint, Witka and Stough take pride and considerable care in sourcing locally as much produce and spirits as possible. To bolster mid-week business, they also offer daily special deals: “Beer and Basa Mondays” offers a craft micro brew and kielbasa sandwich for $10; on “Taco Tuesdays” you can get $5 gourmet taco and $5 margaritas; “Wine Down Thursdays” features half price on select wines (currently French rose is a hot ticket item).

When it comes to alcohol, The New York Restaurant offers a decent if limited selection of wines ranging in price from $7 to $12 per glass, with domestic wines from California and Washington State, and international wines from New Zealand, Italy, Chile, France, and Argentina.

Since opening a year and a half ago, The New York Restaurant has seen a steady growth in business, especially Thursday through Saturday nights when the place is packed with both local clientele and out-of-towners. On these busy nights, as well as on Sundays’ Live Jazz Brunch series, Witka, along with her brother and main host Mariusz, can often be seen going table to table warmly greeting guests. Sometimes she even dons an apron to help Stough behind the line.

What’s nice about the NYR is there’s something for everyone—a rich and satisfying meal (with plenty of leftovers); live music (on the weekends) by acoustic soul, indie singer/songwriter performers like Murali Coryell, Lex Grey, Jen DuBois, Becky Pine, Michael Louis, and house band The Compact; and a lively bar scene.

Natasha admits she was scared when she bought the building because Catskill was so incredibly quiet then. “There were days when we were doing construction when it was like a ghost town,” she recalls. But Catskill has come a long way since The New York Restaurant opened, with several other new businesses scheduled to open this summer and more people visiting and shopping in the village, in part due to the increase in traffic brought in by The New York Restaurant. “We’re excited to be at the forefront of Catskill’s evolution,” Witka says.

This article was originally published in the June 2017 issue of Chronogram, and is reposted here with permission.