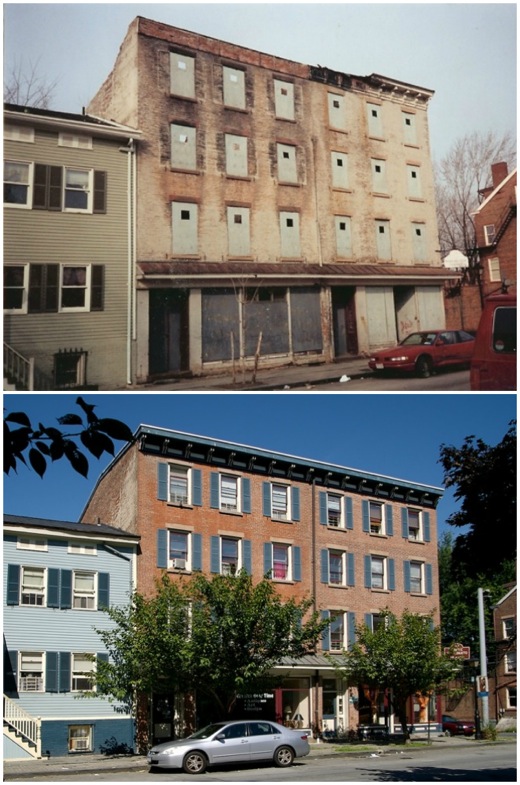 This before and after of 97 and 99 Liberty Street in Newburgh is not brand new. But, recently the side by side comparison was just made available. The corner cafe on the right is home to one of Newburgh’s most famous culinary destinations, Caffé Macchiato. Take a close look at the before photo and you will see that this building was a shell in the late 90′s. The squares in the windows are see-through, and the brick all along the left side is totally missing. Had it been left untouched it probably would have been slated for demolition or collapsed on its own.

Eventually two business partners decided to restore the building. When another Newburgher, Michael Gabor, found out that 97 & 99 Liberty were going to be restored, he decided to buy 95 Liberty and restore it as well. Today, these restored beauties are prime real estate facing Newburgh’s historic Washington’s Headquarters. Later on, Michael decided to sell 95 Liberty to finance the start up of a new business, Newburgh Art Supply.

The moral of the story: restoration can be contagious and inspire some pretty incredible things. Around the corner is another pair of buildings that are just two shells, once the home of the Clinton Hotel. The work done on Liberty Street gives hope for other future rehab projects. Had 97 & 99 Liberty been torn down the entire feeling of Washington Market would be different. The character these buildings and homes give historic districts can not be duplicated. Perhaps the restoration of the Clinton Hotel will spread the “restoration bug” as well. To see more before and after photos of Newburgh buildings head over to Newburgh Restoration.