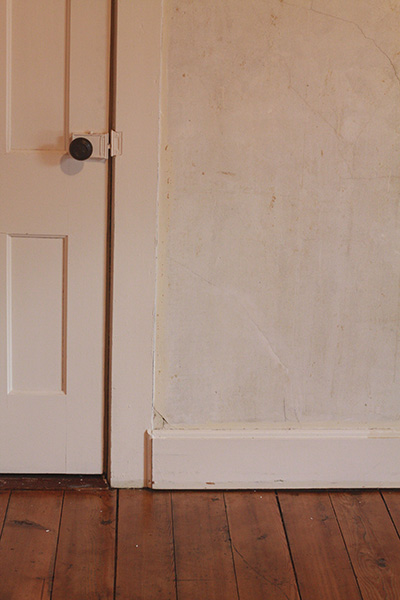 Plaster walls in one of the bedrooms

After a slightly longer hiatus than we planned, the Weekenders are back!  We had a great summer with a successfully pulled-off wedding that included great music, tasty food, and of course a fabulous location (our barn). Then we got totally caught up in gardening and yard work through the amazing Indian summer we had this year with tomatoes and zucchini into October. Now that winter has really set in with 4 degrees on the day after Thanksgiving, we’re gearing up for some more house projects including figuring out what to do with some old plaster walls.

One thing I’ve always noticed when looking at photos in listings for old houses, especially old farm houses, is all of the wallpaper on the walls.  I always just assumed that it was only because that was the fashion of the day, and that people renovated old farmhouses to look like old farmhouses by putting up Victorian or turn of the century-looking wallpaper. Don’t get me wrong – I think in some cases limited use of wallpaper can be fantastic, and for really nice wallpaper, expensive.  But too much wallpaper – especially ugly wallpaper – isn’t something that I find aesthetically appealing.  It never occurred to me that there might be another reason for all of that wallpaper.  As was the case in our house, wallpaper can hide multiple wall sins that paint can’t: cracks, holes, stains, bad paint colors, older wallpaper, secret messages, etc.

When we bought our place three (!) years ago there was, in fact wallpaper in every bedroom and hallway.  After tons of cleaning and ripping up carpet, removing the old, ugly, peeling wallpaper came next. I discovered a fairly tried and true removal method – a spray bottle of hot dish-soapy water, sprayed on one panel at a time, let it soak in for five to ten minutes (don’t let it dry out), then use a three inch paint scraper to scrape it off.

One of the reasons the paper came of relatively easily in the bedrooms upstairs was because those walls were the original smooth plaster – not newfangled dry-wall most newer homes have. We were actually really excited about this. Plaster walls are apparently more fireproof, sound proof and provide better insulating qualities. Also, because they are a smooth solid surface, they don’t have the seams that drywall has, and they are less prone to nicks and dents.

Some of the downsides of plaster walls are that they are prone to crack, especially around doors and windows as old houses settle, and in some cases, especially on ceilings, the solid plaster can come loose from the wooden strips or lathe that the plaster is on top of.    They are also generally more expensive to fix large areas that have issues – it’s easier and cheaper to just cover up old, cracked and broken plaster walls and ceilings with drywall or paneling (as has been done in many rooms in our house, and all of our ceilings have been covered with drywall or wood), than to pay someone who is good at plastering to come and fix or re-do entire walls or rooms.  This Old House  has a pretty good description of how plaster and lathe walls work and how to reattach plaster that has separated from lathe if you have small areas to repair. 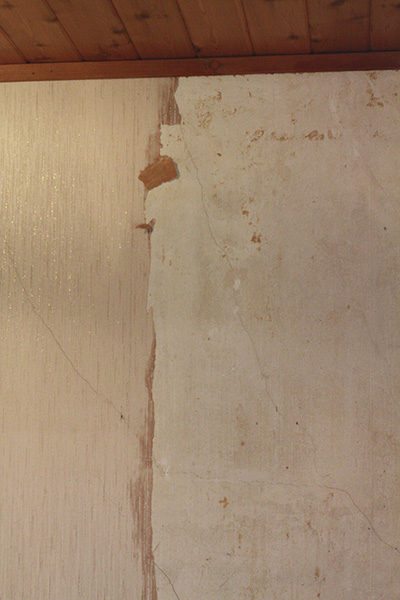 Wallpaper in the process of being removed.

After removing the wallpaper, we actually really like the way that the bare plaster walls look – kind of French/European and antique, so we’re trying to find a way to preserve the look of the plaster walls, but make them look a little more finished. Unfortunately, we haven’t found a lot of resources or information online. I looked into doing real whitewash.  Whitewash is literally paint made with very watered down slaked lime – essentially adding a very thin layer of lime plaster to your walls. Whitewash has other benefits  – it’s non-toxic,  you can color it  with  pigments or stains it’s mildly anti bacterial and insect repellant (thus it’s common use on the inside of dairy barns).  But it is also prone to rub off if you brush against it.

I contacted a company called Earth Pigments to see if they could recommend a whitewash treatment we could use that wouldn’t rub off.  I got a very nice reply from them informing me that whitewash wouldn’t really work on our plaster walls which were most likely the newer gypsum plaster, rather than lime plaster.  They gave us the suggestion that we try Casein Borax Paint (essentially milk paint), and gave us a recipe to which we could add some pigments if we wanted as well as an acrylic binder to make it more permanent.

Other suggestions have been as varied as clear polyurethane, clear stain and wax.  Luckily, of the three rooms that have plaster walls that haven’t been covered, one of them is in sort of rough shape, so we plan to just paint over the plaster.  But before that, we can use the plaster walls to do some experiments to figure out exactly what we want to do in the other rooms.

Any Upstater readers had any experience refinishing, painting or rehabbing plaster walls?  Any tips (that don’t involve wallpaper) you can give us and other Upstater readers?