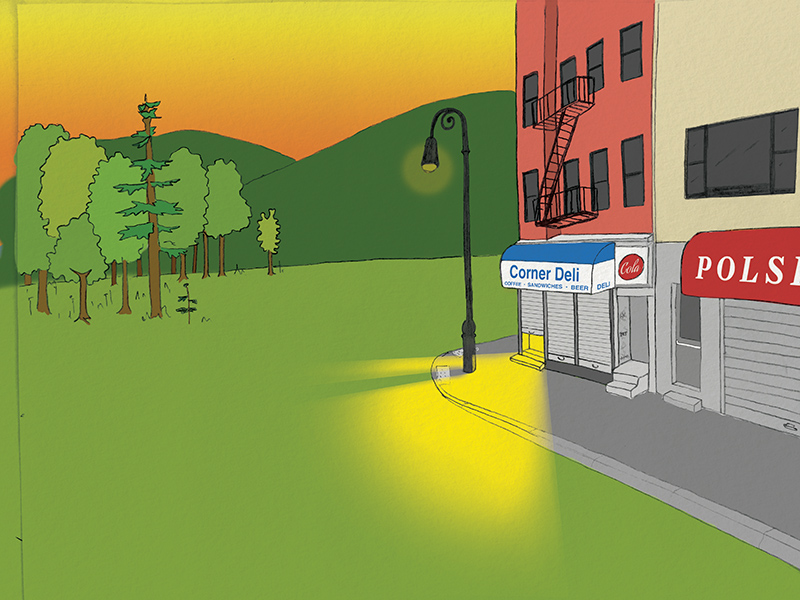 There comes a moment in every relationship when you have to put it all on the table. With the man I met this past spring at a friend’s house in Kingston, that moment arrived earlier than expected. Our meeting was auspicious, involving Tequila shots, a Harry Styles singalong, and a late-night car make-out. Two nights later, we sat next to each other in a dark bar, sipping red wine. I was only in town for another day. There was no point in being coy, I’d fallen asleep in this guy’s car already. So I said it.

“Do you think you can actually date someone who lives in … Brooklyn?”

I wasn’t sure that was the answer I was looking for, but I nodded. After all, it was really the only thing we could do. And his response was wiser than my actions had been on the night we’d met, at least with regard to the Tequila shots. But I couldn’t help being a little bit wild.He’d walked into the room where I was sitting with my friends, and I’d set my eyes on him and registered a surprising, exhilarating thought: This is a person I want to know better.

I wasn’t looking for anyone. Last winter, I was dumped by my former boyfriend as we were about to fly to Miami for a romantic vacation. I went on the vacation anyway, and aside from some angry texting and his mailing me back some books with a Post-It note attached, we hadn’t communicated since. I’d gone through the writerly phases of grief: from denial to rage to publishing an essay about it. But I still hadn’t quite moved on.

Just as there’s a moment to share your truth—what you want and need—with the person you’re dating, there comes a moment after every breakup when, despite having vowed never to love again—because loving is impossible and only ends in pain, and what’s the point of anything anyway?—you see someone else and maybe even speak to them and whoa, wait a second. It’s undeniable: A little piece of you that was presumed dead has shown itself to be very much alive. Everyone who’s been dumped knows this moment will come eventually, even if it seems impossible to contemplate at our most broken hearted. Humans are resilient creatures, and most of us love again.

My apartment building in Brooklyn is across from a very good bodega, where the employees greet you effusively and tell you they haven’t seen you for a while, even if they just saw you yesterday. Every night, when the bodega closes, the sound of its metal grate coming down to protect the eggs and overpriced packaged foods and milk and cat food and actual bodega cat reverberates down the block.

That sound, wafting through my open windows as I sleep at night, is comforting, giving the world around me a kind of order, but after my last breakup, it took on greater meaning. Thinking someone loves you one day and realizing he doesn’t the next is enough to make you swear off dating completely—to latch your bodega grate shut without a sign of it ever budging, keeping all your vulnerable emotions safely protected inside. Though I’d downloaded Tinder to my phone and flipped through the options, often in a state of amused despair—why did so many men include pictures of teddy bears in their profiles?—I simply wasn’t open for business. “My bodega grate is down,” I told friends who asked how I was doing, and they’d laugh.

When I met this new guy I detected a tiny internal creak that indicated movement in the bodega grate. A rattling. Maybe the grate was on the way up again, or at least the latches were being unlocked. But would my heart be safe with this person? One meeting wasn’t enough for me to tell.

So that night at the bar, I asked logistical questions as a way of determining safety without bringing in the word heart: How would we navigate an upstate/downstate relationship? Was there any use trying? Was I actually going to start taking the bus? That was another something I’d sworn off since dating a guy in New York City while I was in college in D.C.—a relationship that had resulted in the slamming down of the bodega grate for at least six months.

“Why don’t we just see what happens?” could seem like a way to brush off my question. But this new guy took me to his house that night and held me as we slept. The next morning, he made me coffee with milk he foamed himself before driving me back to my friend’s house. The guys I’d seen on Tinder really couldn’t compare to this upstate man who had raspberries growing in his yard, took care of people for a living, understood and didn’t laugh when I told him about my bodega grate and how I needed to take things creakily slow, and asked for my number and then actually texted me. He was already planning to drive two hours to see me the following weekend.

“Can you date someone who lives in…Brooklyn?” I’d asked, but the question had really been whether I could date someone at all. Was I ready?

It appeared that not only had my bodega grate lifted, but the lights in the store were on, and they were serving breakfast sandwiches.