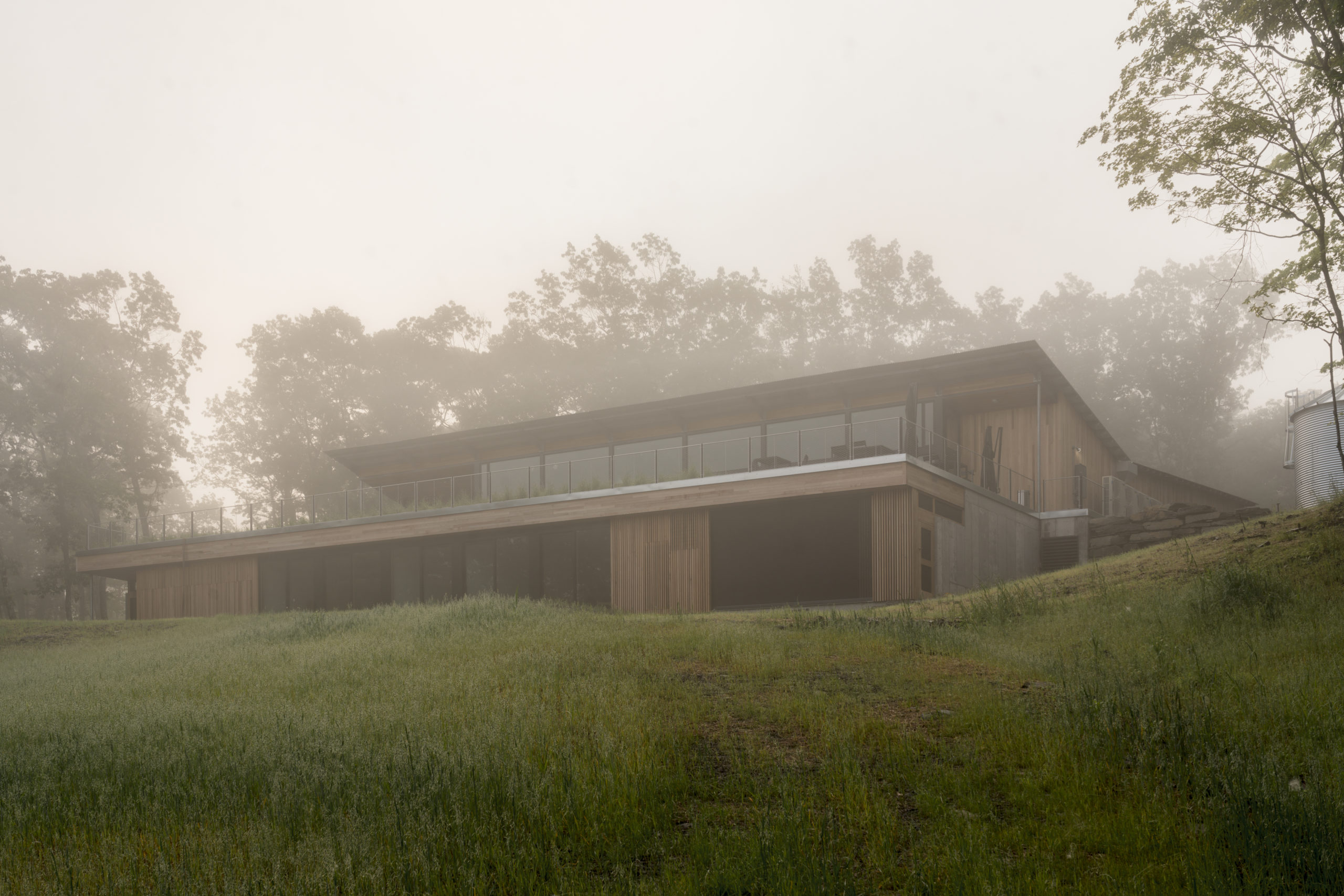 “Once we saw that view, everything else just fell into place,” says Nolan McHugh, co-founder of Piaule, which quietly opened in July on the outskirts of Catskill to a rush of bookings. He is referring to the jaw-dropping panorama of the Catskill Escarpment that is on full display in every space of the hotel’s main building from the lobby and deck on the upper level to the spa on the lower floor. It is a breathtaking vista that would give any lookout in the region a run for its money. 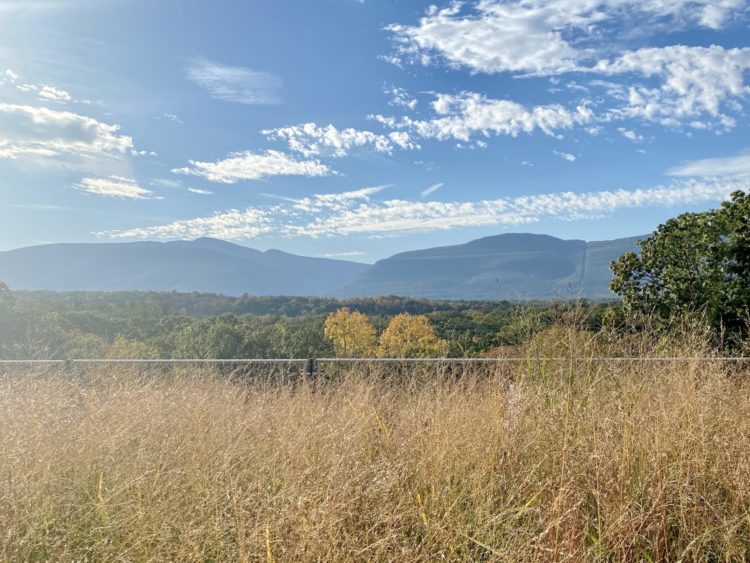 The view from the Piaule deck. Photo by Marie Doyon.

Despite already scoring write-ups in Vogue, Remodelista, Conde Nast Traveler, Design Milk, and other high-profile publications in the few short months they’ve been open, McHugh and his co-founder Trevor Briggs are far from seasoned hospitality vets. In fact, they stumbled sideways into the industry.

When they first launched Piaule in 2016, it was as a homeware brand. Their first product was a bath towel made with organic Japanese cotton. “We wanted to make something that felt artful and interesting and unexpected,” McHugh says. “We decided to focus on products that people might find boring or mundane, such as a white bath towel, to try and showcase them in a way that was captivating but also made people value the product so that it wasn’t so disposable to them.” 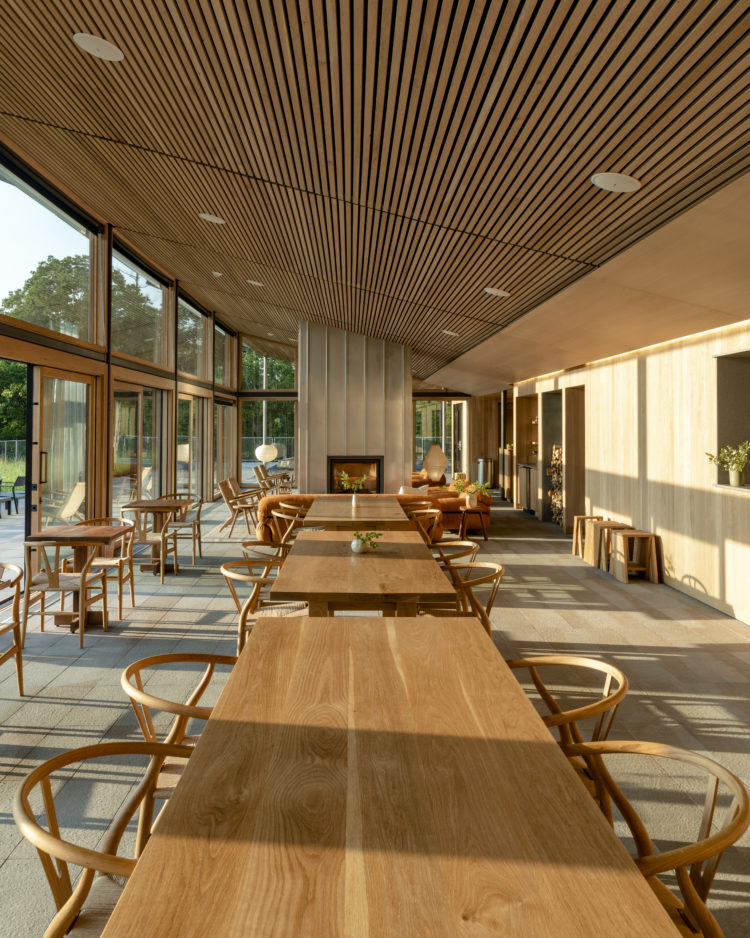 The restaurant/lobby. Photo by Sean Davidson

After bath towels, they moved onto tableware, sheets, glassware, even mesh shorts, amassing a cult following for their high-quality, minimalist wares. “The way we were approaching it was not to maximize profit,” McHugh says. “To make ends meet, we were Airbnbing our apartments. As weird as that is, it was sort of our first exposure to hospitality.”

Pretty soon, that bloomed into the desire to translate the careful, curated approach that was Piaule’s signature into a hospitality project. After briefly exploring the idea of a desert destination (and then discarding it because of climate change concerns), the duo focused their land search in the Hudson Valley. After a year of looking, they found the current Piaule property in October 2017. 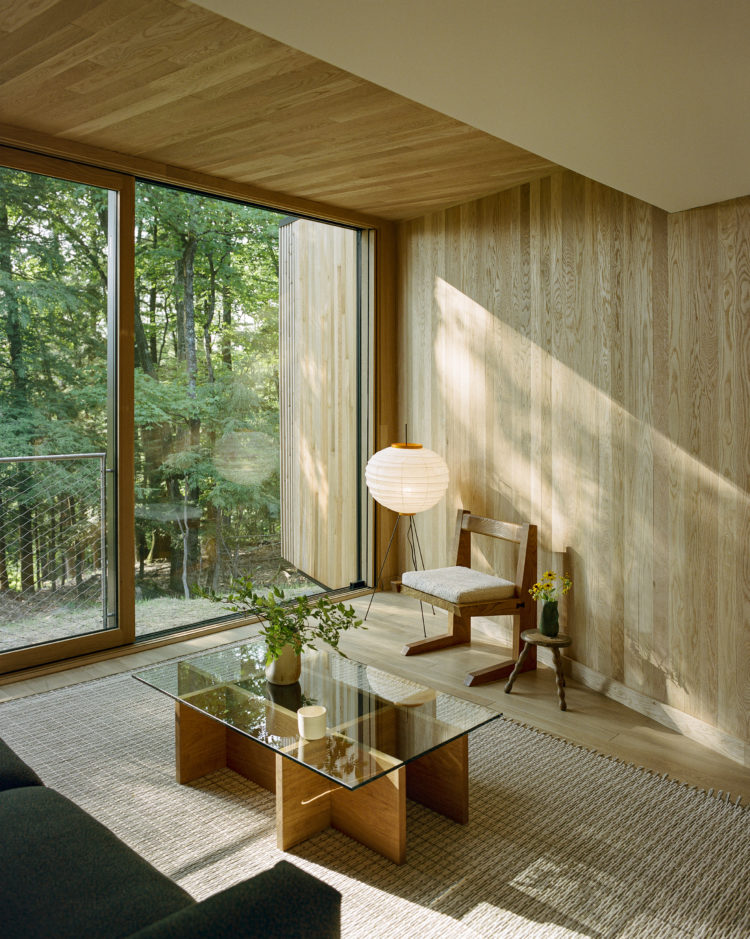 The sitting area in one of the cabins. Photo by Sean Davidson

For two years after closing, McHugh and Briggs lived onsite in an old house they dubbed “the shack,” as they went through the design and approval process, becoming intimately acquainted with the site through the seasons. The pair tried to salvage the building, but it was ultimately not structurally sound enough to relocate. Still it served its purpose; McHugh credits the time spent living on the property with guiding the nuances of Piaule’s design. “It influenced where everything is placed throughout the site,” he says. “Just being able to see where the sun hit in the morning, how it changed the sky, what vantage points were interesting, what felt protected or secluded—all of those ideas evolved over time on the land.”

The same approach that runs through Piaule’s product development—the thoughtfulness and the artful reframing of something commonplace—can be felt in the accommodations at Piaule, where nature is elevated as both art and therapy. “We looked all over the world and through centuries of architecture to find things that spoke to us, that felt like they connected with the landscape and that their purpose was to fit in as much as possible,” McHugh says. “But also aesthetically, we wanted something that felt refreshing compared to the typical Hudson Valley vernacular.” 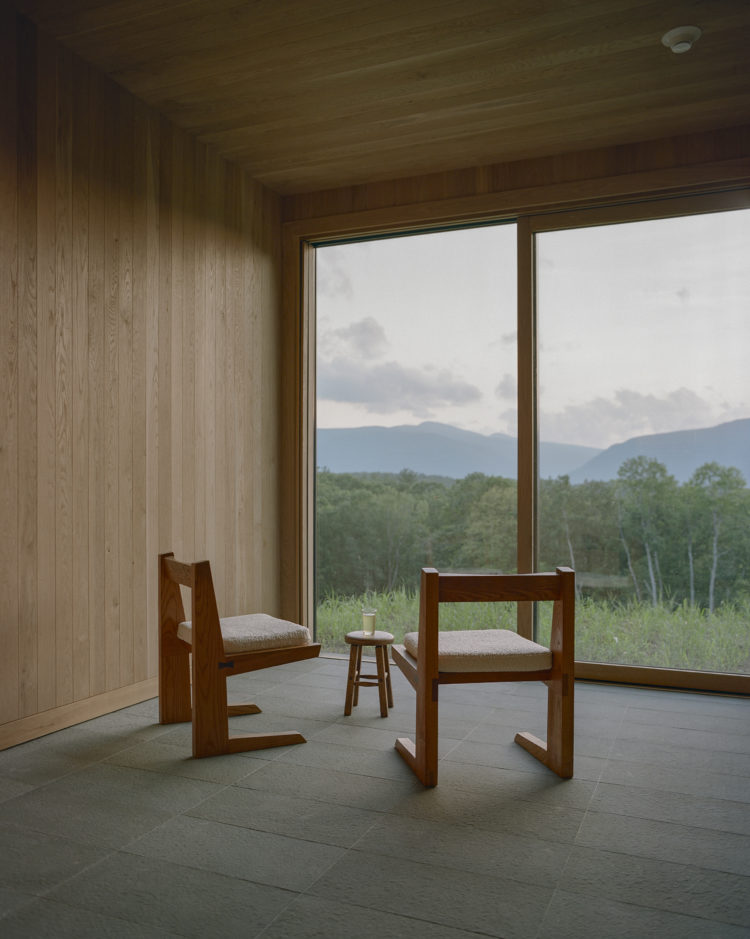 He cites Japanese and Scandinavian architecture as major sources of inspiration, both from a design perspective and how they interact with the landscape. Other reference points included Juvet in Norway, from which Piaule borrowed the term “landscape hotel”; the work of Australian architect Glenn Murcutt; and the famed Leça swimming pools of Portuguese architect Alvaro Siza, which inspired the spa.

Built into the slope, the main building at Piaule is constructed out of cast concrete, with bluestone flooring and unfinished white oak paneling—an understated aesthetic McHugh calls “warm but restrained.” On both floors, the entire western wall is constructed of glass to offer uninterrupted views of the Catskills from every space. “The whole purpose is to bask in the majesty of the mountains,” McHugh says. “It’s cool because from the different rooms, even though you’re staring at the same thing, you get slightly different vantage points.” 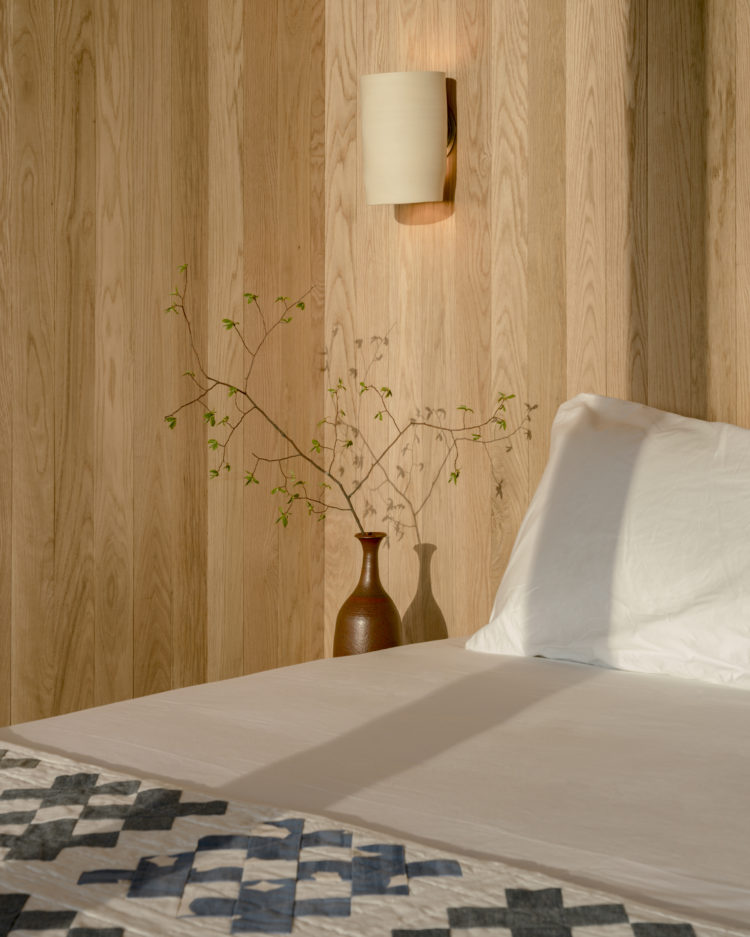 The property encompasses 50 mostly wooded acres, though only five were developed for the project. A short walk away from the main building, 24 freestanding cabins are tucked into a gravel clearing amidst the trees. The building materials—untreated oak, cedar, corrugated metal, glass, and stone—carry over from the main house to the cabins. The units, designed in collaboration with industrialized building specialist James Garrison of Garrison Architects, were built off-site and trucked in, already 95 percent complete. ” Using a crane, the prefabricated cabins were placed on foundational stilts four feet above ground, allowing water and animals to pass beneath. This modular method of construction has a range of benefits from faster build times and fewer overlapping trades to less waste and a smaller ecological footprint. “Site-building 24 individual buildings in woods would have been incredibly destructive,” McHugh says. “Our concern was really dropping the structures into place as delicately as possible.” 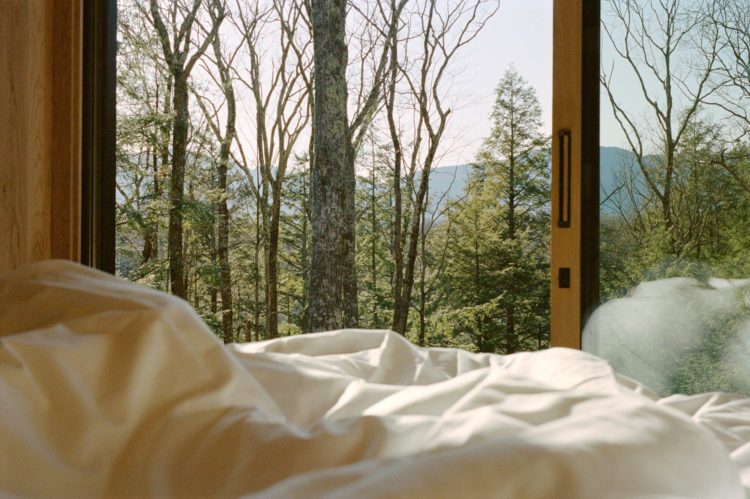 In an age when nature and luxury are often pitted against one other as false opposites, Piaule manages to restore the landscape to a place of honor, framing nature as the ultimate indulgence. The modernist accommodations feature king-sized beds with organic Piaule linens and furniture alongside handcrafted objects by local artisans and antiques. At the western end of each cabin, a 10-foot-by-13-foot glass slider opens to let the treetops and the birdsong in. The bathrooms have heated stone floors, waterfall showers, and a custom line of toiletries developed in collaboration with Catskill-based apothecary Village Common. There’s also There’s WiFi in the rooms but no TVs. The point is to find your way back to peace, and the main roads there are nature and the spa.

“The relaxation one can get from a spa experience is hard to replicate with any other amenity,” McHugh says. “That, combined with the reflection and sense of gratitude that you feel when immersed in this landscape—staring at mountains and listening to wind in trees and birds chirping and the raindrops—that those experiences are connected is what we wanted guests to feel when they were here.” 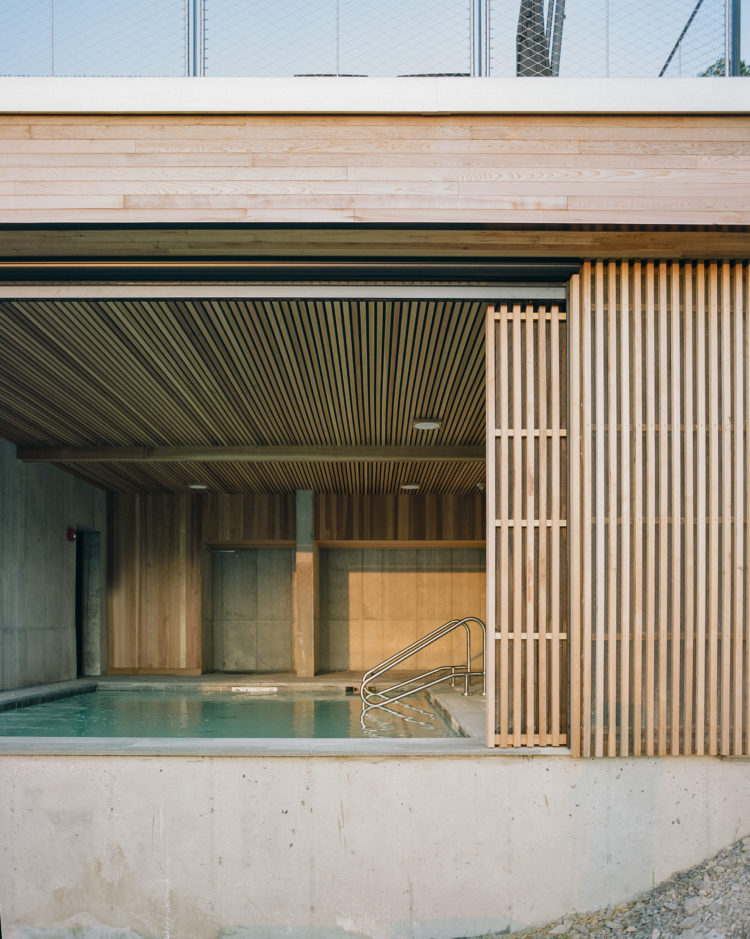 The pool, heated to 98 degrees year-round, sits at the foot of a would-be wall, which is actually open to the outdoors, protected only by a bug screen, with that postcard mountain view. There’s also a cold plunge pool, sauna, and steam room. Massage, yoga classes, sound baths, and a handful of other treatment modalities are available by appointment.

Upstairs, the restaurant is open to guests for dinner on Friday and Saturday nights, with a rotating, four-course, prix-fixe menu of farm-to-table fare prepared by chef Zack Shornick ($65). “Out of necessity, we limited dinner service to only two nights a week due to staffing,” McHugh says. “But we discovered from that that we are super passionate about sending our guests to as many of the local restaurants as we can. We’re spoiled in that we don’t have to rush to expand our food offerings because people can go to award-winning restaurants within half an hour.” Among their top recommendations? Lil’ Deb’s Oasis in Hudson, Silvia in Woodstock, Gaskin’s in Germantown, Gracie’s Luncheonette in Leeds, Circle W in Palenville, and nearby in Catskill, the new Subversive brewery, with its fresh beer and wood-fired pizza truck. 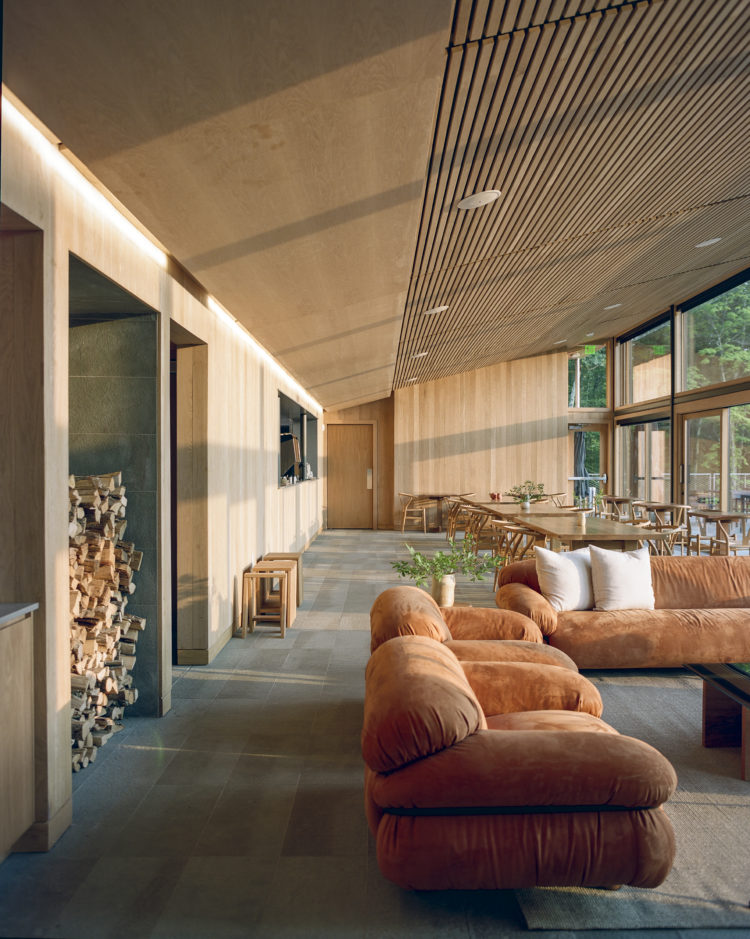 On warmer days, guests can take to the sprawling second-floor deck to enjoy a meal or a bottle of wine al fresco. More than half the square footage of the deck is taken up by a block planting of tall grasses, which rustle and wave in the wind. When asked about this allocation of space, McHugh has many reasons—philosophical, practical, aesthetic. “The grass represents our approach overall—which is not to maximize capacity or profit or number of rooms or seats but to find a balance between the right scale and nature,” he says. Practically speaking, the area of the deck where the grass has been sown is over the spa treatment rooms, so one of the considerations was to preserve the sanctity and peace of those spaces. “It’s also meant to pull your eyeline from what would be the foreground of tables and chairs into the distance,” he says. “By giving you a really peaceful and unobtrusive foreground, it draws your eyes to the treeline and the mountains in the distance.”

Piaule is open for booking seven days a week, single rooms start at $499 a night.