Tortillaville in Hudson, NY and the Florida Keys

Food trucks are everywhere now, and if you’ve been dying to get in on the action, now’s your chance. Tortillaville, a hugely popular Mexican food truck parked on Warren Street in Hudson, is for sale.

According to the owner’s most recent Facebook post, there’s a serious money-making opportunity here for a potential buyer, and owner financing is possible. Owner Brian Branigan stated in his sales pitch that, “the business, in just six months, working four days per week, from 11AM to 7PM, or a total of just 76 days, earned enough for its partners to take the entire Winter season off.” Further, he claims there’s little overhead, but the Tortillaville brand already comes packaged with a devote following, good press, a snazzy website, a great location, and it even has its own book behind it: Food Truck 101; A Recipe For Success, slated for release this summer.

Branigan and his partner, Allison Culbertson, are looking to sell the whole enchilada for $175,000, but would lower the price to around $150,000 to a buyer who doesn’t want the wholesale business, website or company name. The owners will apprentice the buyer for two weeks and teach them all the ins-and-outs, including recipes.

The owners are currently wintering the business in the Florida Keys, and it appears that just the Hudson location is for sale. Branigan stated he’s selling the business “because of success, not failure.” He plans to start up other food truck businesses and is ready to “move on to the next creative challenge.”

The outlook is optimistic, according to owner Branigan, with the potential of grossing “a half million in five years,” while working 3-4 days a week during the peak season and then time off during the winter. Plans are also in the works to add three other food trucks to the Warren Street location, as well as a beer garden.

Tortillaville has been called “The best taco this side of Mexico” by the NY Daily News, and “The Best burrito on the east coast” according to Slate.com. If you’re interested in owning the business, better act soon. We have a feeling the business won’t be on the market for long. 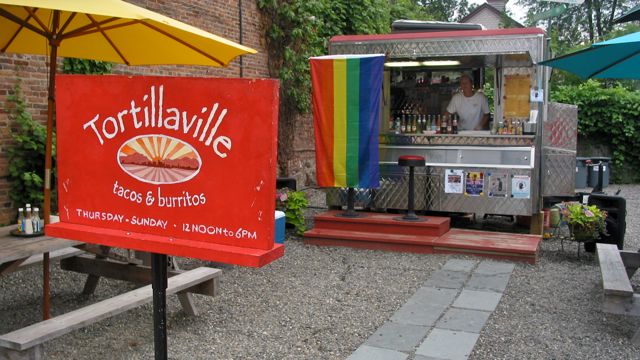