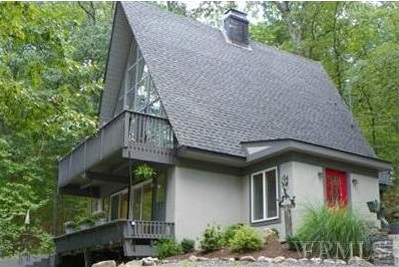 I might as well come clean (so to speak) and admit that I chose this adorable 3-bedroom rental because of one of the two bathrooms. There, I said it. As soon as I saw the photo of the gigantic walk-in shower with all the bells and whistles, not to mention the big bathtub with jets, harps began to play the dream music, and I imagined myself spending hours in that shower, asking, “What does this button do?” But hark!  Is that a cute, red spiral staircase?  Swoon!  I find it slightly suspicious, however, that the listing contained no pictures of the kitchen.   Considering how bright, fun and modern this place is, though, I’m willing to look past it and just assume that the kitchen is as cool as the rest of this house.

This is a lot of rental for $2,000 a month (plus the listing says it has 600 sf studio over the two-car garage), and while it’s fairly secluded, this 1,432-square foot A-frame still sits conveniently close to the Taconic Parkway. And how many BBQs would you throw if you had a patio like that?  If you answered, “As many as humanly possible,” then you win! It also sits pretty near the center of Hopewell Junction, which is a nifty little hamlet situated in East Fishkill. There’s plenty to do around there, like hiking, winery tours, shops, just in case your fancy spa bathroom gets a little boring for you.