The Hudson Valley is known for its large-scale artworks: Think Storm King Art Center, Dia:Beacon, and Opus 40. But there’s also the entire village of Rosendale in Ulster County, which some critics consider to be one of the most important works of late-20th century American Art. Not because of the architecture, although the handsome, pastel-colored Victorians and verdant backyard patios, are certainly aesthetically wondrous. Not because of the village’s natural setting, although it is stunning, nestled in between the snaking Rondout Creek and Joppenbergh Mountain. But because of a genre-defying multi-year piece of conceptual art that caused the village of Rosendale to cease to exist forever.

It was the mid-1970s—a rough time for Rosendale. The village was broke, the sewer system was constantly failing (befouling both basements and the Rondout Creek,) and the village was being overrun with hippies who didn’t get along well with those who had been there for generations, back to when Rosendale was known as a major hub for cement production. 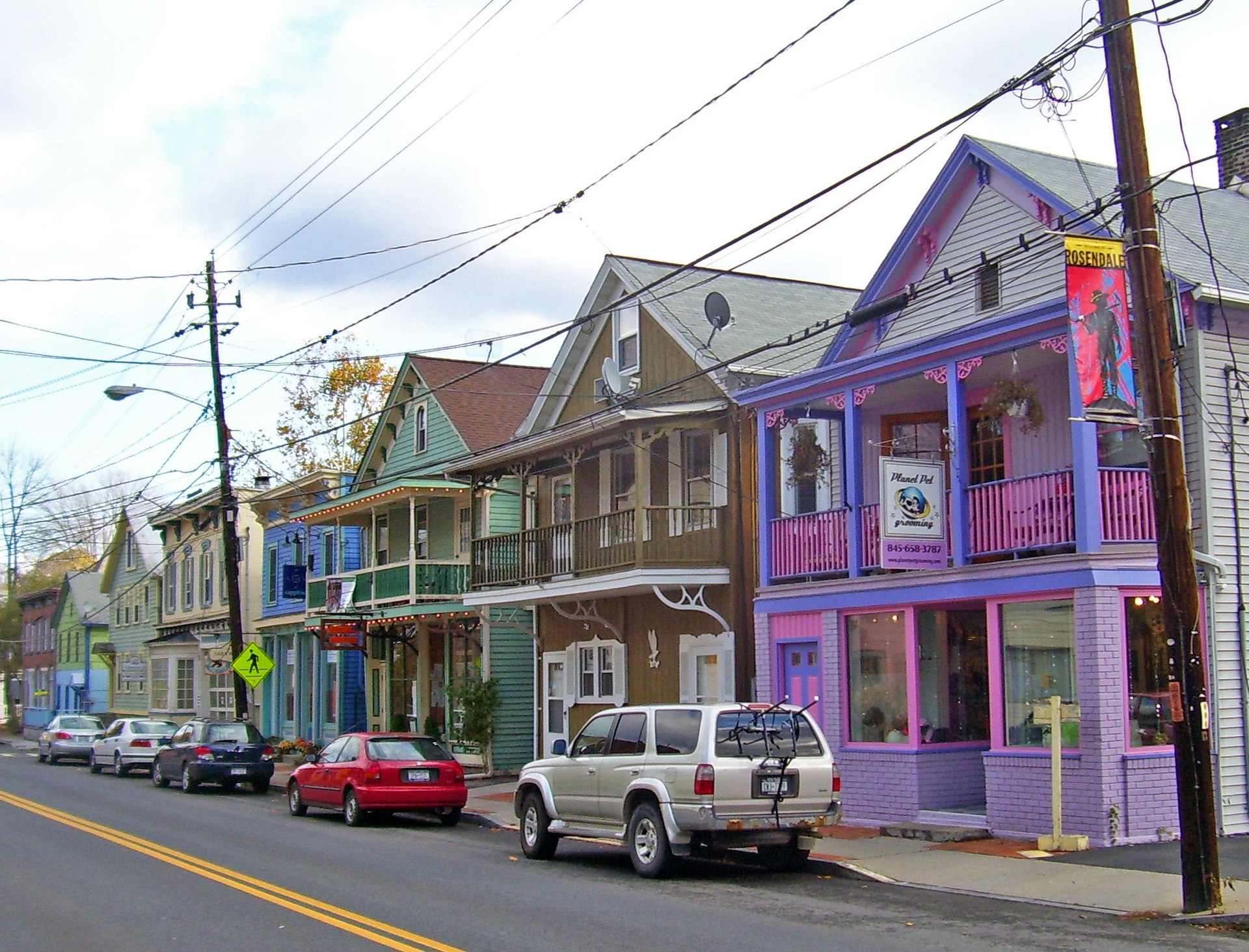 Enter Ravio Puusemp, who announced in 1974 that he was running for mayor. Despite being a recent transplant from SoHo and a conceptual artist, Puusemp was able to win by essentially being the “normal” candidate (his main political rival was a guy who walked around town barefoot in a bathrobe and a derby and had proclaimed himself to be the king of Rosendale.) Once in office, Puusemp set about convincing his fellow citizens of Rosendale the only feasible solution to its problems would be to disincorporate, abolishing itself and being absorbed by the larger town of Rosendale.

It was a tough sell. The people had a lot of pride in their village, whose roots went all the way back to the late 1600s. There was also the fact that the people of the village and the people of the town kind of hated each other (going as far as to regularly disrupt each other’s municipal meetings). When the town’s snow plows refused to plow the village after snow storms, lifting up their plows as they drove down Main Street, the village bought its own plow and then barred the town’s plows from passing through. But Puusemp made his case to the villagers by slowly going through the budget and showing everyone how much money they would save by dissolving and merging services. People’s opinions changed, momentum was built, and the village of Rosendale voted overwhelmingly to wipe itself off the map. 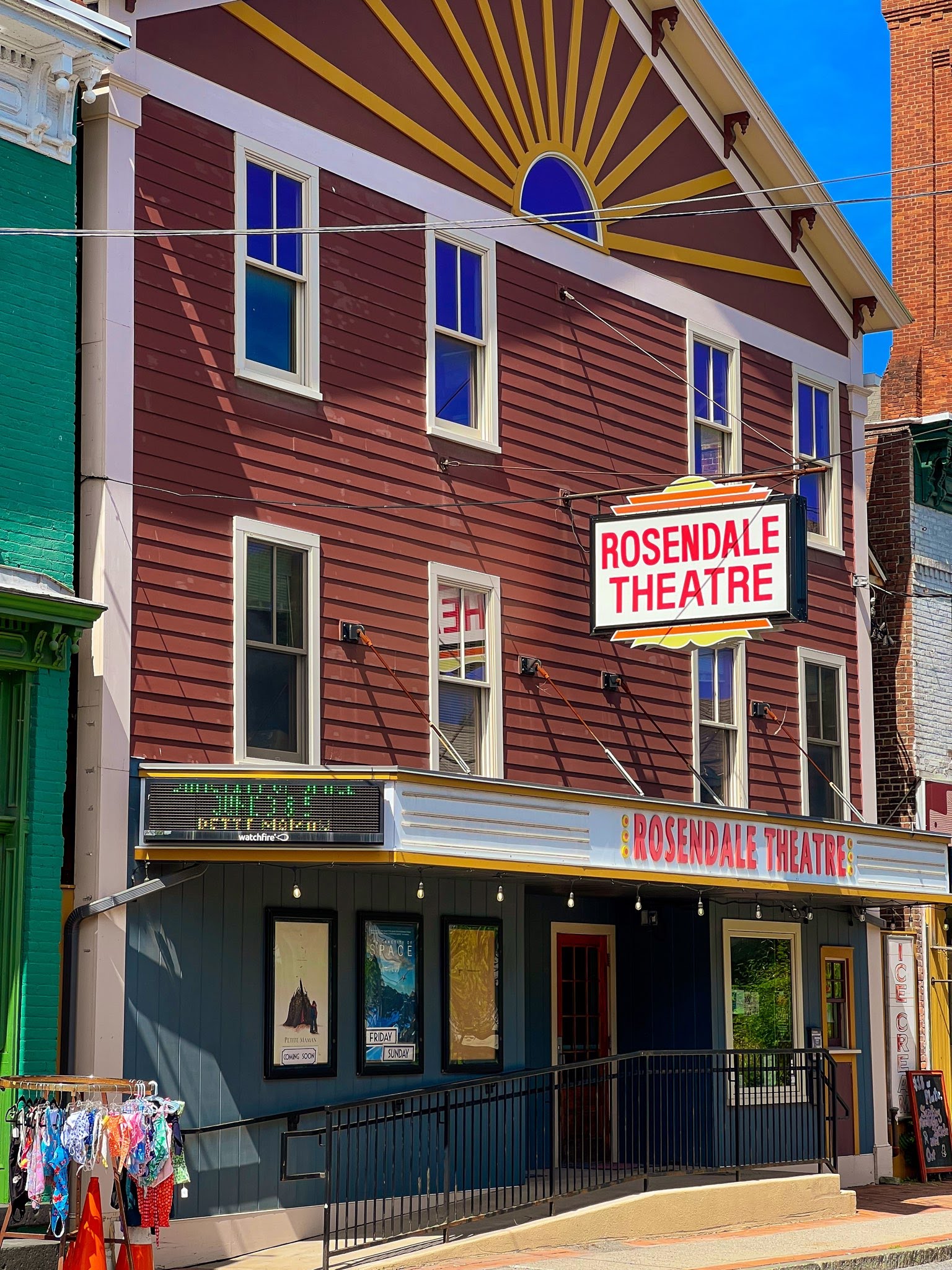 The Rosendale Theatre dates back to 1905.

Puusemp’s work was done. He promptly resigned, quit politics forever, moved to Utah, published a book entitled Beyond Art: Dissolution of Rosendale, NY, and then quit art forever. His book revealed what few knew all along: Puusemp’s entire political career was actually a conceptual art project based upon his own theories of social suggestion. Instead of telling the village that it needed to dissolve, he laid out the facts and gently prodded them into realizing that extinction was the only way to survive.

In his classic book Essays on The Blurring of Art and Life, performance art trailblazer Allan Kaprow lionized Puusemp’s work in Rosendale as being an example of a new “lifelike” form of art that was about a greater, common good instead of an individual artist’s ego: “To cure a local illness and allow village life, and Puusemp’s life, to go on more constructively.” Looking back many years later, Puusemp admitted that while getting into politics in the form of a massive avant-garde artistic experiment was “a weird thing to be doing,” in the end, everything worked out for the best for everyone. 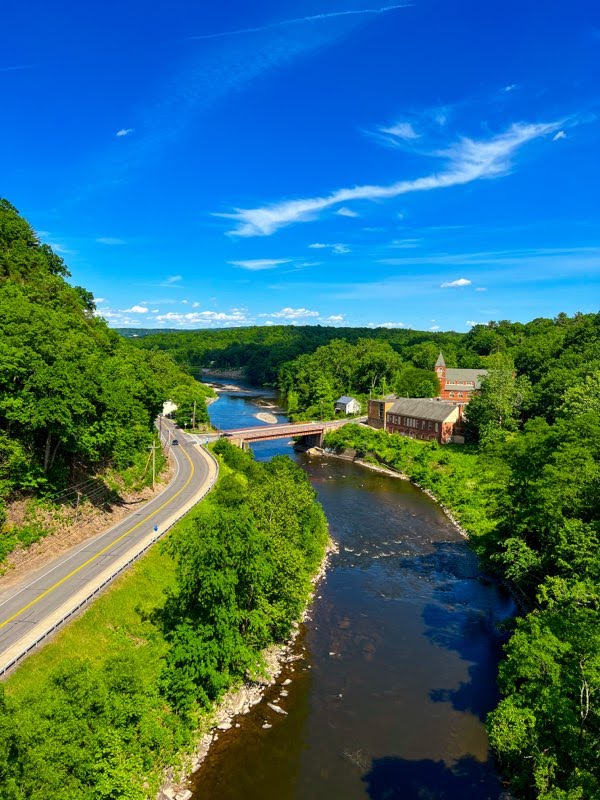 The view from the Rosendale Trestle

You can see the legacy of Puusemp’s experiment today in the village—er, census-designated-place, of Rosendale. Partly because, yes, the creek is not filled with sewage and the streets get plowed in the winter without incident. But mostly in the community’s remarkable cohesion: Puusemp had gotten the hippies and the old-timers to work together on a common project, uniting them at last. And while pretty much every Hudson Valley town has had to deal with the tension between newcomers flocking up from New York City and the older generations who were there first, Rosendale’s successive waves soon find themselves integrated into the greater whole. “They keep each other in check,” said Serena Rodriguez, about the old-timers who “keep Rosendale Rosendale” and the recent transplants who recharge its energy.

Rodriguez falls somewhere in between, having moved to town 13 years ago because of that cohesive community. “Everyone I knew in the area that was cool was living here,” she says. While the names on the storefronts have changed (RIP Market Market, the cafe/grocery store/performance venue that served as a cultural incubator during the 2010s, the Red Brick Tavern, Vision of Tibet, and Bywater Bistro to name a few), Rosendale’s air of sustainable funkiness hasn’t. “Many of the towns around here have changed,” Rodriguez says. “Rosendale hasn’t. It still has that really good, small town artsy vibe.” 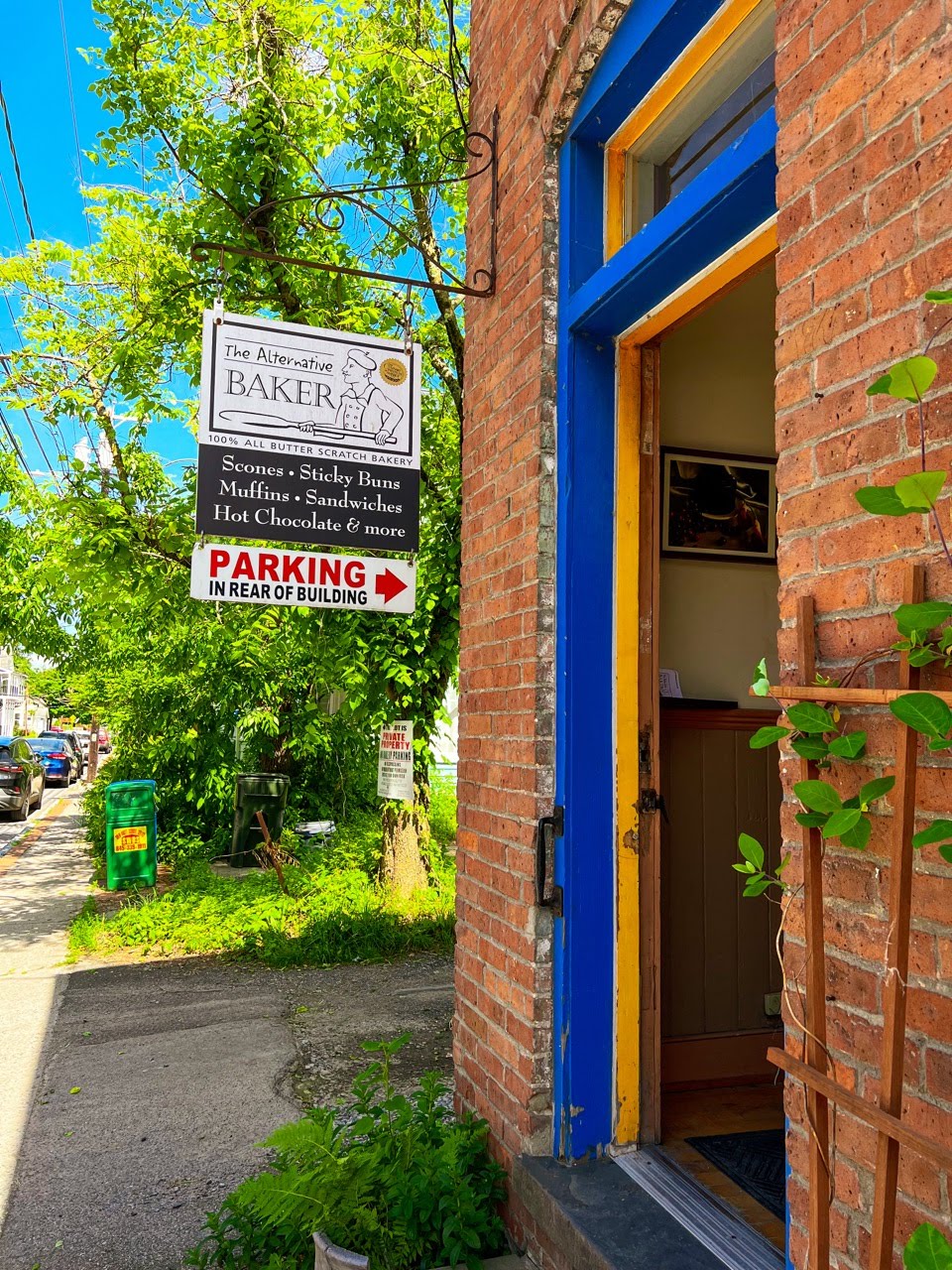 That vibe’s been laid down by such landmarks as the volunteer-run Rosendale Theater, which has been showing movies since 1905 and now does live theater as well. The Alternative Baker, one of the two most culturally significant bakeries in the Hudson Valley (along with Daniel Leader’s Bread Alone), opened here in 1995 serving gluten-free baked goods and other items catering to dietary needs long before most people knew celiac disease was. The Rosendale Cafe, one of the Hudson Valley’s most beloved vegetarian restaurants for over 25 years and getting better with age. Pop in on Thursday evenings for the lively salsa nights, with lessons followed by open dance.

That vibe has been sustained by places like The Big Cheese, which manages to simultaneously be a cheese shop, a Mediterranean cafe and market, and a vintage clothing retailer. Speaking of threads, a few doors down, Soiled Doves does a steady business of vintage clothes, antique housewares, and classic Rosendale controversy (last year the owner made headlines when she announced that police officers, firefighters, and members of the military were no longer welcome in the store.) 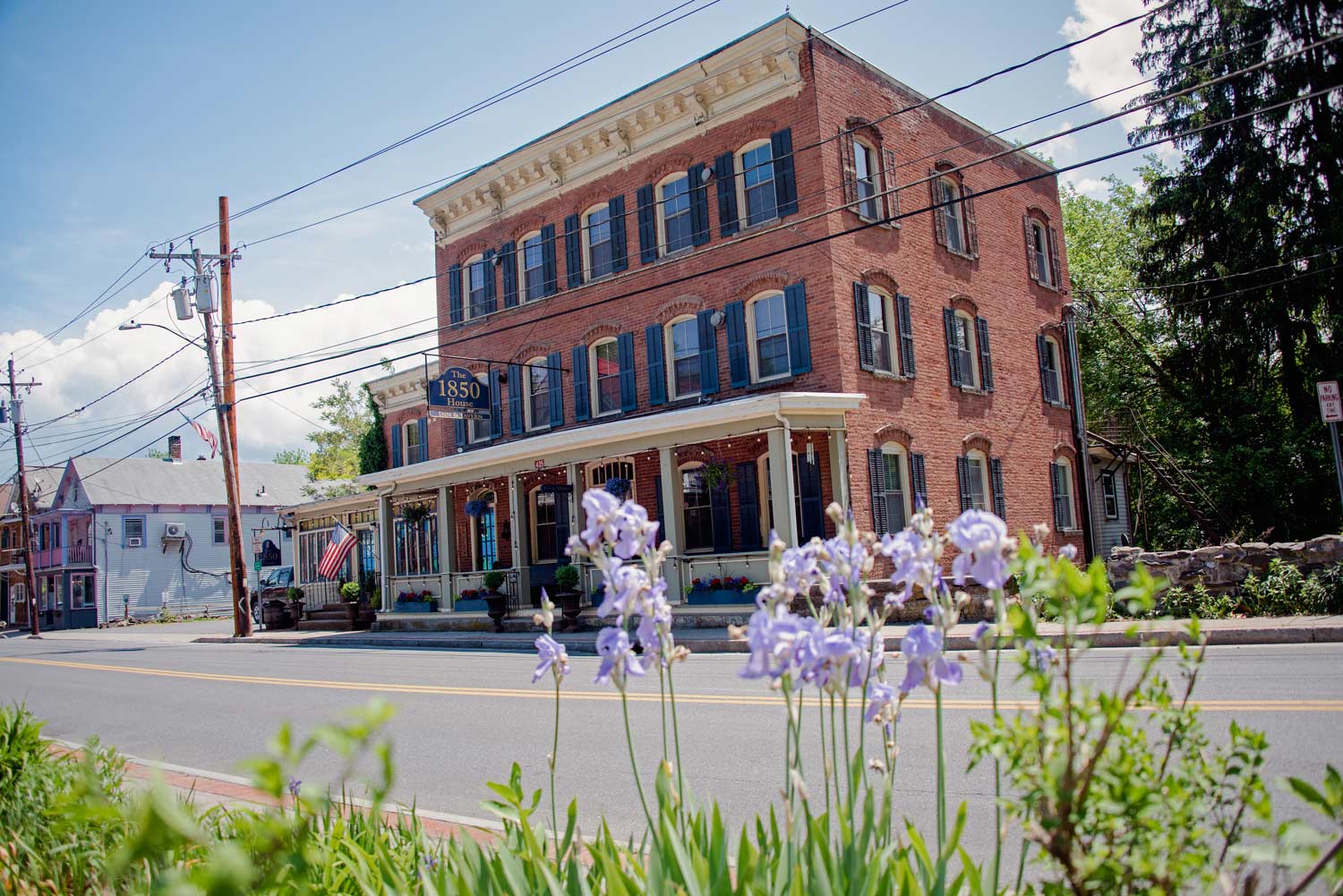 Even Rosendale’s “classy” establishment, the 1850 House Inn, sports an interior design that honors its history and heritage without feeling stuffy and haunted (plus a gorgeous back deck overlooking the creek.)

The newcomers to Rosendale have helped to keep the vibe going. Soy moved up from the East Village in 2017 to offer cozy, creekside Japanese home cooking with a Secret Garden-esque back patio. Postmark Books sports not only an impressive local history and children’s section, but an in-house floral design studio as well. In Fann’s Plaza, modern diner Truss & Trestle  opened last year, with local stonemason Gerard Swarthout picking up where previous occupant, 32 Lunch, left off. Also in the plaza, My Town Marketplace is fulfilling locals’ long-standing wish for a dependable grocery store. Pizza cravings can be met by both Antonio’s on the east side of Route 32 and Tosco’s. And if all the soy, gluten-free, and vegetarian fare leaves you craving red meat, Santa Fe Burger Bar, an offshoot of Kingston and Woodstock’s Santa Fe Mexican restaurants, opened here last year and specializes not only in burgers but also milkshakes. 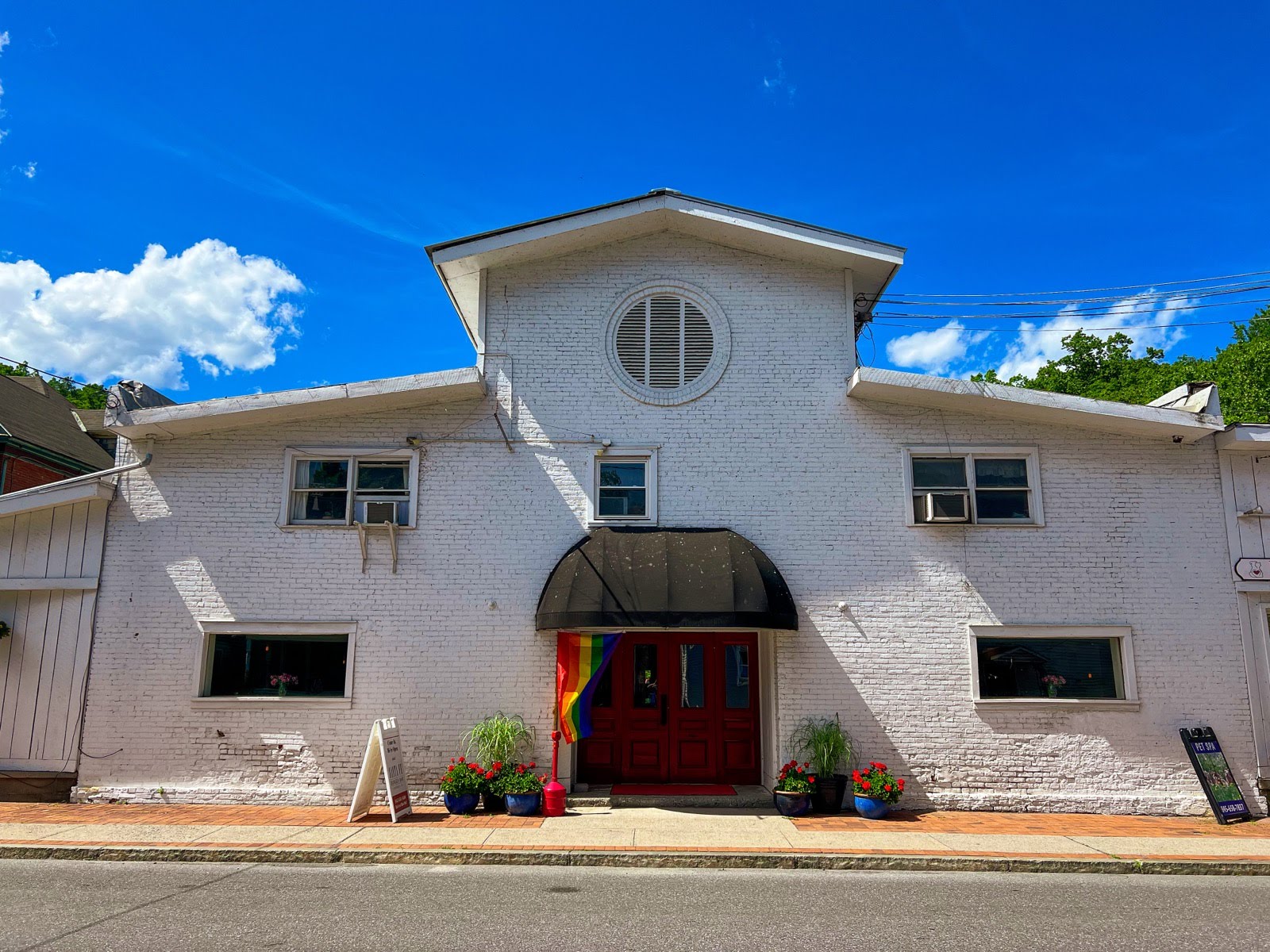 If you want to walk off your meal, a spur trail out behind Santa Fe leads up to the Wallkill Valley Rail Trail and the soaring Rosendale Trestle, which offers panoramic views of the creek and Main Street below. The rail trail was already an easy way to bike or jog to New Paltz or Kingston, but it became even better when the system was folded into the 750-mile Empire State Trail last year, which means you can now bike from Rosendale to Manhattan, Buffalo, or Canada if you feel up for it. It also means a new influx of visitors who are arriving in Rosendale and taking the time to enjoy the ever-unfolding benefits of an unconventional secret community-wide art project that continues to transform the place in surprising ways, 45 years later.