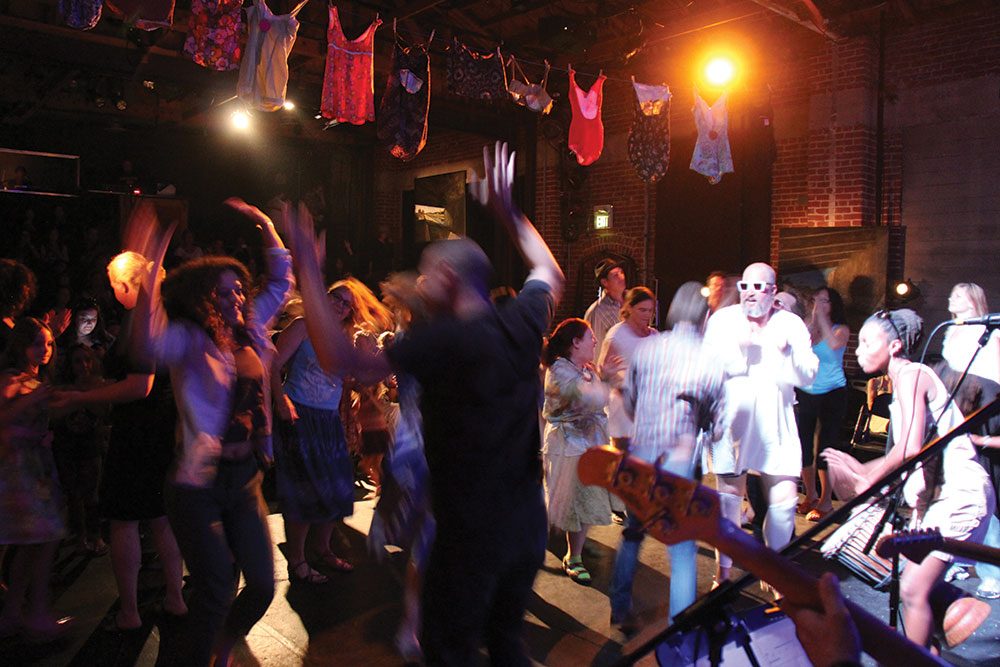 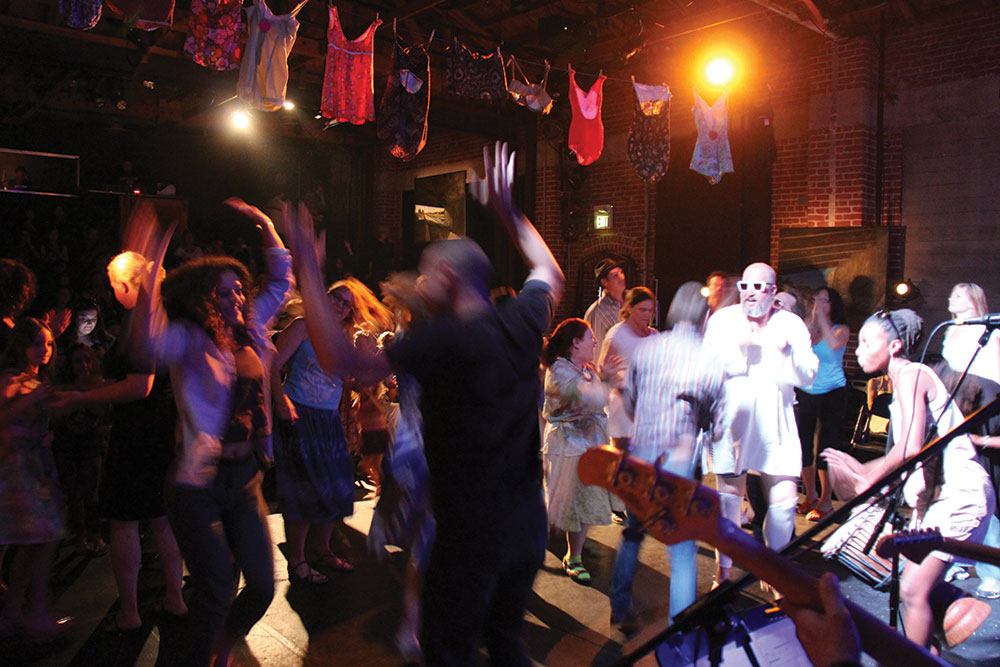 This may sound name-droppy, but here goes: Whenever I’m met with confusion on the part of someone I’ve invited to join me at one of The Secret City’s  tent-revival-style Sunday “services”—held monthly in Manhattan and in Woodstock once each summer—I whip out my “Cash card.” As in: “Oh, by the way, The Secret City is something Rosanne Cash told me about. She’s performed there.”

That’s all it takes to persuade the uninitiated to come along to this  ceremony/performance/salon hybrid described as a “church of art.” By the end of the service, they’re complete converts.

That’s all it took for me, too. I had no idea what Cash was talking about when she mentioned the “gathering of artists,” a nonprofit to which she requested I donate her compensation for an essay she wrote for one of my anthologies about the push-pull New York City exerts on its inhabitants. When I asked where to mail the check, she provided an address in Woodstock. Turned out, this church of art was headquartered 25 minutes from my apartment in Kingston.

“I can hand-deliver this,” I said.

“That’s perfect,” Cash responded. “You have to meet Chris Wells.”

She was referring to the organization’s spirited co-founder,  artistic director, and Grand Poobah—a writer, actor, and cabaret performer who was raised in Lancaster, California, without religion, but on his own discovered a love of ritual, ceremony, and worship rooted in creative expression, separate from any kind of deity or dogma. An imposing figure over six feet tall, Wells leads the Sunday “services” and delivers touchingly funny monologue-style “sermons” wearing bright, shiny, outrageous getups—usually accompanied with towering platform heels.

My hackles went up at the likening of the organization to any kind of church. As the lapsed, black sheep daughter of Jewish clergy, I’m freaked out by religion of any kind. But Cash’s recommendation wasn’t at all off. In fact, by introducing me to Wells and his “house of worship,” she presented me with the perfect balm for my artsy-fartsy, outsider, tortured-clergy-kid soul. 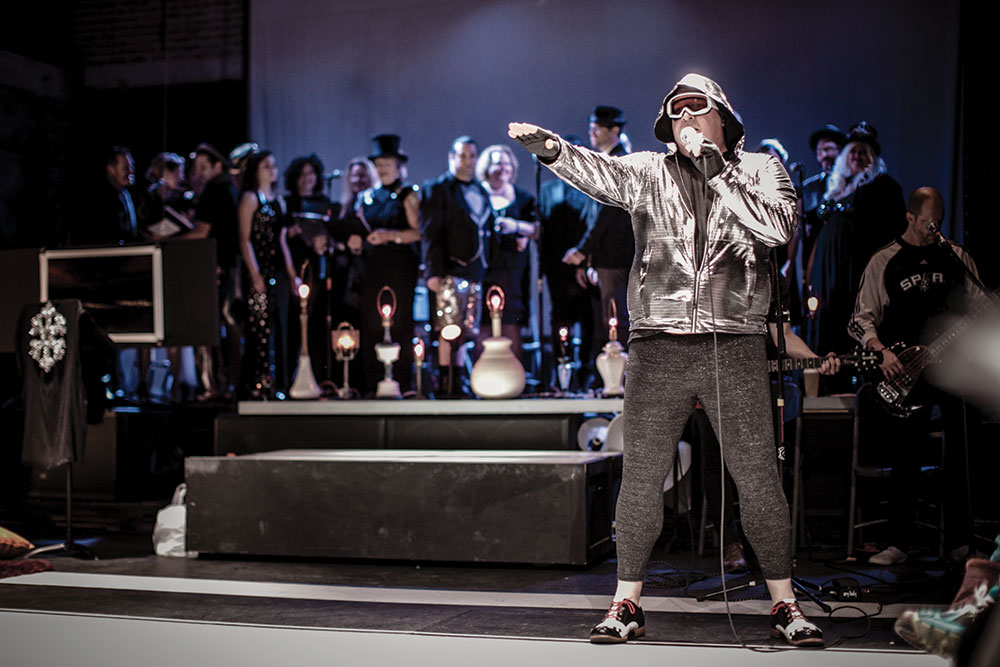 So, what is The Secret City? It’s a 90-minute high-energy happening that takes place on Sundays once a month—four times a year in L.A., eight or nine times a year in Manhattan, and once a year in Woodstock. It’s both an irreverent sendup of the tent-revival church experience and a reverent bow to community, acceptance, and the power of the arts to shed light on shared human experiences. “It’s playing on the idea of religious or spiritual ritual,” Wells says, “and it’s preposterous at times, really silly, but my goal is that by the end of the event, a transformation has occurred.” The lack of self-seriousness makes the transformation part somehow more accessible.

There’s a choir, but it performs covers of pop songs around a theme—past themes include Prophesy, Risk, Camp, and Sugar—and originals written by Wells and his band leader, singer-songwriter Jeremy Bass. Each service features a visual artist (like Woodstock artist Kate McGloughlin and Ayun Halliday, author/illustrator of the zine The East Village Inky, who’s now the organization’s volunteer “coordinatrix”) chosen by Wells’s life partner and The Secret City’s co-founder and fine art director, painter Bobby Lucy; a musical artist (like Cash, Simi Stone, Andru Bemis, and Broadway actor and Fun Home star Michael Cerveris); an offering of food, in tiny Dixie Cups, from local foodies (like Woodstock nutritional counselor Holly Shelowitz); a spoken-word artist; and performers in other media like the dance act the D’Amby Project. 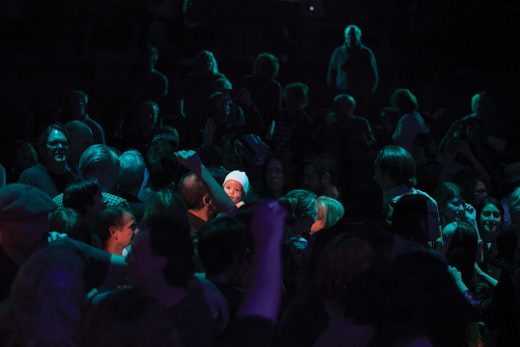 Each service also has a theme-related “sermon,” drawn from Wells’s own experiences. “An artist version of a sermon is a personal experience,” he explains. “If the text a preacher refers to is scripture, the text that an artist refers to is their life. I think that’s a big difference between art and religion—that art is grounded in the artist’s life and personal experience and personal vision, and it is not grounded in an outside text.”

That’s central to what Wells calls The Secret City’s “cosmology.” “I always found spiritual sustenance through making art,” he says. Well, actually, first he found it in a church choir a friend invited him to join when he was 12. His family didn’t go to church, but he went. “I had myself baptized at 12, and confirmed at 13.” He wasn’t drawn so much by the notion of God as he was by the rituals, music, and communal worship. But at 16, he found theater, which quickly replaced church. Wells became an actor, writer, and singer in Los Angeles, juggling day jobs with plays, bands, lounge acts, and other kinds of art, always craving community with other performers. It was hard, though, to find kindred spirits in sprawling L.A. “I thought Los Angeles was a city that you had to find. It didn’t present itself easily to you—you had to find it and build it yourself,” he says.

The L.A. he was trying to find was the creative one. “Creativity is a means of practicing connectedness,” he says. “I thought, why are art communities divided? Why don’t they intersect more?” That got him wondering: “Wouldn’t it be cool if there was something sort of equivalent to church, but it was about and for artists? It should be a gathering that has lots of parts and pieces to it, but it should be different from going to see a play, or going to a concert. And there should be elements of high and low. I’m very interested in oppositional art, meaning it should always be high and it should always be low. It should always be ridiculous, and always be profound. It should have a lighter quality to it, and it should be open and available to all people.”

That’s one of the many things that distinguishes The Secret City from religion-based churches. “I’ve wondered,” Wells says, “if your goal is to attract people with a transcending experience, or a feeling of belonging, or sustenance of any kind, why would you create so many barriers to so many people?” 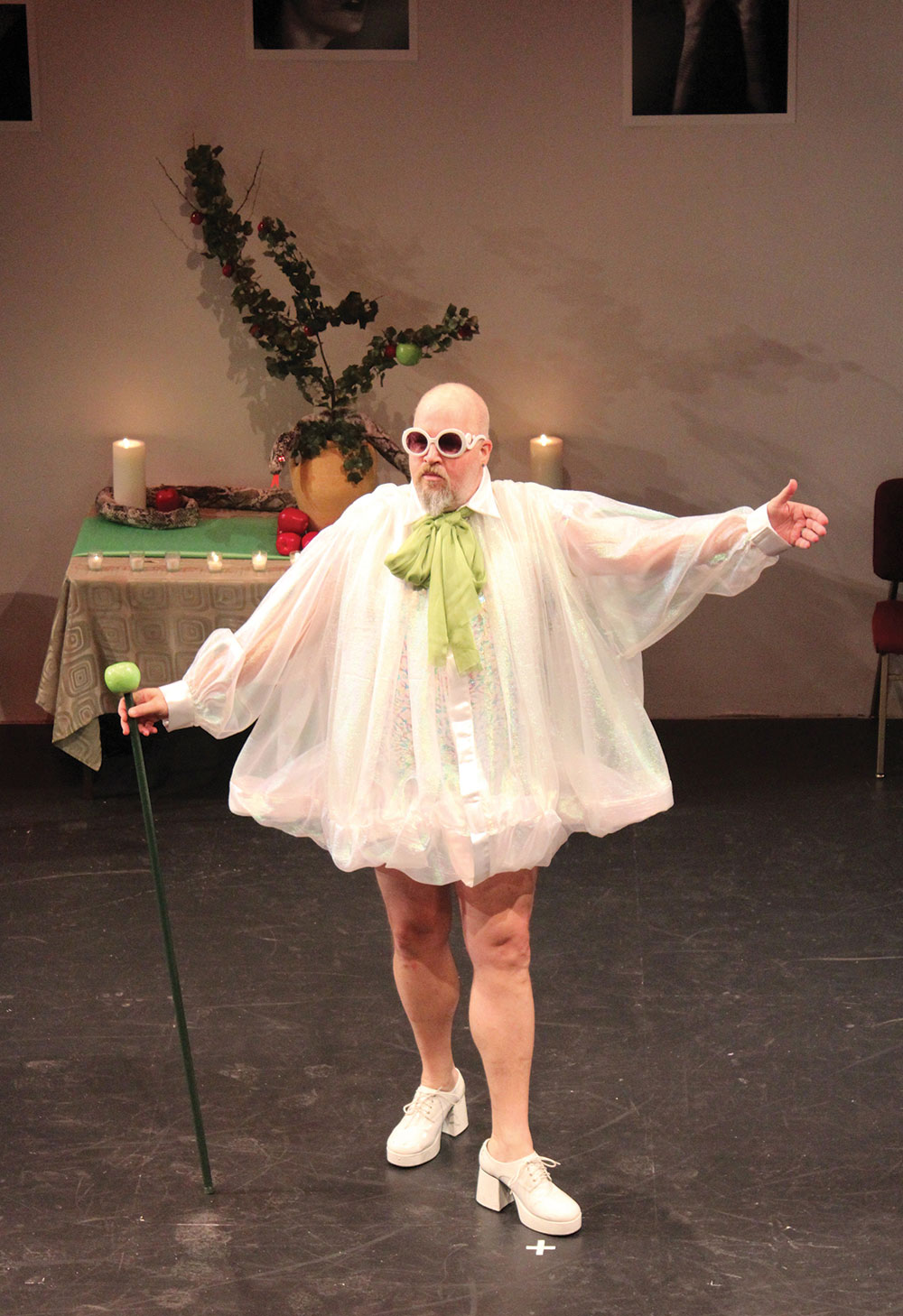 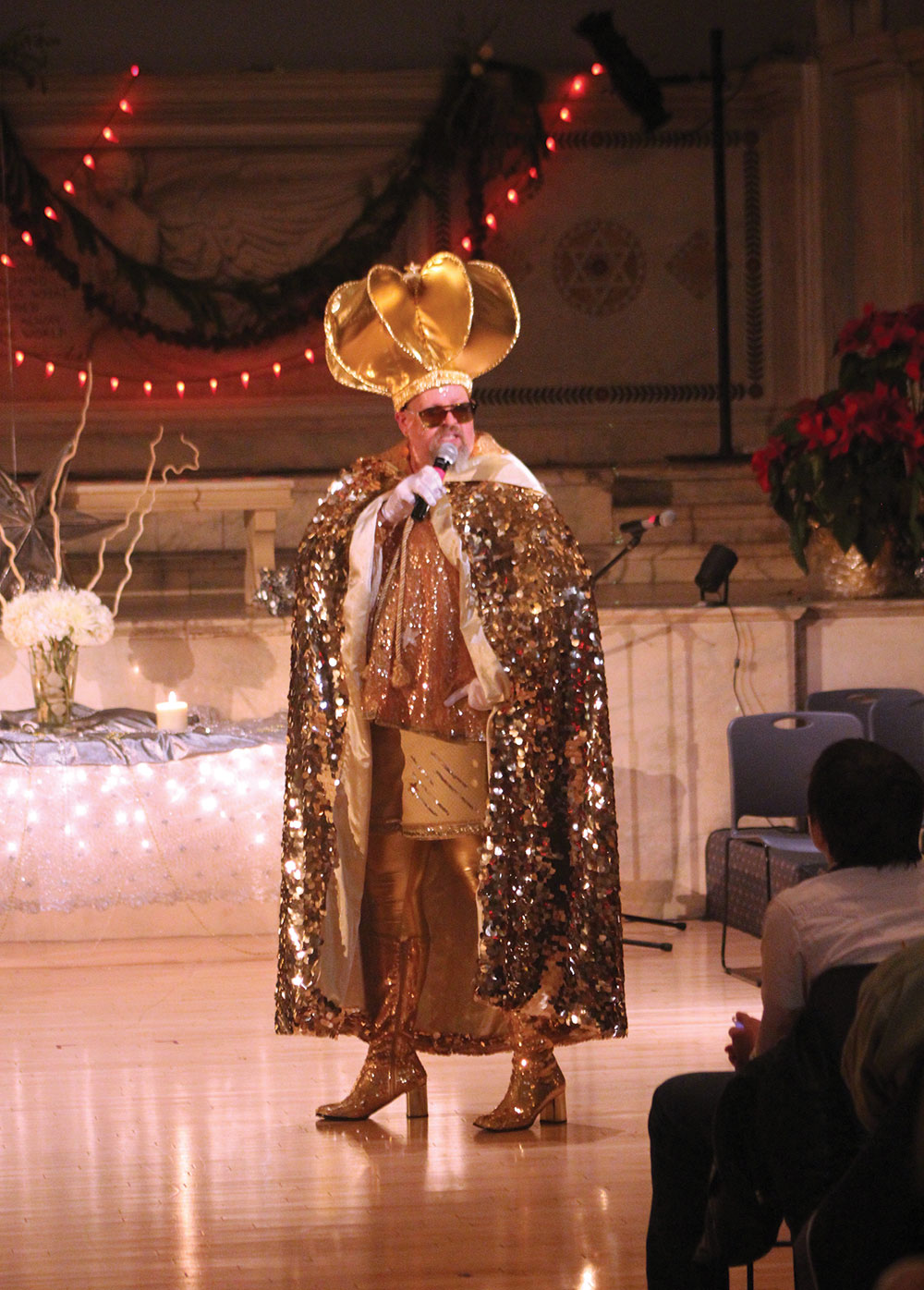 Wells founded The Secret City in 2007, after moving to New York and meeting Lucy through Lucy’s niece, who was in a traveling production of A Midsummer Night’s Dream with Wells. As his relationship with Lucy solidified, Wells realized he didn’t want to be on the road anymore. It was time to create what he’d envisioned: a monthly event celebrating and connecting artists, that’s open to everyone, regardless of their beliefs or which religion they were raised in. It began in a small theater, Theatre Lab, on West 14th Street. The first time, only four people showed up. But word of mouth and Facebook brought the number of attendees up to 75, so the services moved to a larger space—Dixon Place. In 2010, Wells’s work with The Secret City won him an Obie for Service to the Creative Community, bringing even more followers.

Then, in 2013, Wells and Lucy were awarded residencies at Byrdcliffe Art Colony, and joined the expat migration upstate. They continue to hold services in New York and L.A., but in 2014 added annual services in Woodstock.

The first two services, held at Byrdcliffe Theatre, were a hit. The theater was filled to capacity, with people standing outside, peering in through windows and doors. 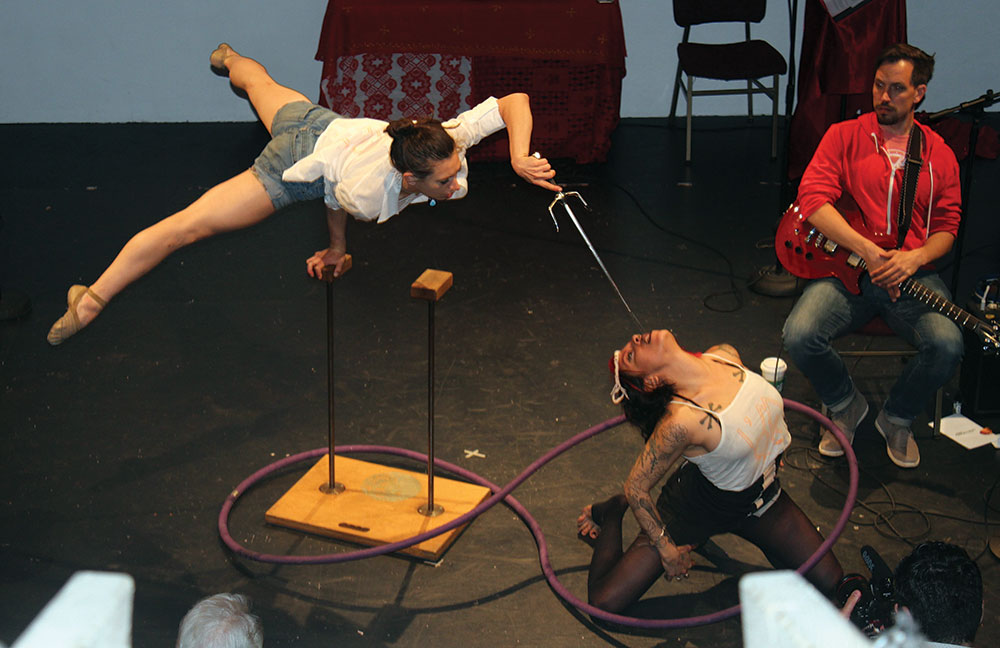 “One of the things I’m most proud of is that, over the years, there are pagans who’ve come, there are all these queer people, there are Jews, there are recovering Catholics, there are people who practice other religions [who] come, and nonbelievers,” he says. “We have a huge atheist community, vegans, trans, old, young, and that’s very satisfying to me. Participation isn’t predicated on what they believe, it’s predicated on a desire to gather and worship.”

Accessibility for non-believers appeals to Cash. “It fulfills a spiritual function that is completely separate from religion,” she says. “Many of us who have washed our hands of religion still crave community and ritual and want to share a sense of wonder. Chris created a space for that and took it to a really fun yet refined level.”

For Halliday, the draw is the community. “Chris truly believes in the power and importance of community,” she says. “He has the sort of outsize personality that makes his monologues and the over-the-top unveilings of his ridiculous monthly getups lots of fun—but he also makes room for little rituals like breathing together, and exchanging pleasantries with the strangers seated near you.”

But The Secret City attracts believers too. “I was raised Catholic,” says Broadway actor Michael Cerveris, who stopped into a Secret City service after reading about it five years ago—and who was honored, along with Chopped star Amanda Freitag, at the organization’s annual fundraiser in May at Dixon Place.

“The Catholic Church is still a place I sometimes go to find comfort,” says Cerveris. “What I really love about The Secret City is that it’s not afraid of ritual, but doesn’t prescribe any kind of belief. That’s the hardest thing to convince people of beforehand: ‘No, I’m not taking you to some weird cult.’ You walk away from it so delighted because you’ve had time to spend time in a contemplative, comforting, uplifting community experience, but you haven’t been asked to subscribe to any particular point of view.”

Connecting in small and simple human ways, focusing on what connects us rather than what divides us, can be incredibly powerful. When I attended my first Secret City service at the Byrdcliffe Theatre in the summer of 2014, and sang in the choir, I was so moved by the feeling of being in a “sanctuary” where I didn’t have to read aloud words I didn’t believe in, and being among a “congregation” of other creative people who accepted me just as I am, that I was crying too hard at the end to form the words of the final song.

On July 31, The Secret City will hold its third annual Woodstock service at Bearsville Theatre, at noon. The featured visual artist will be award-winning coloring book artist Jacinta Bunnell. The Hudson Valley Horrors Roller Derby will be skating. The theme will be “Play.”
Suggested donation: $15.