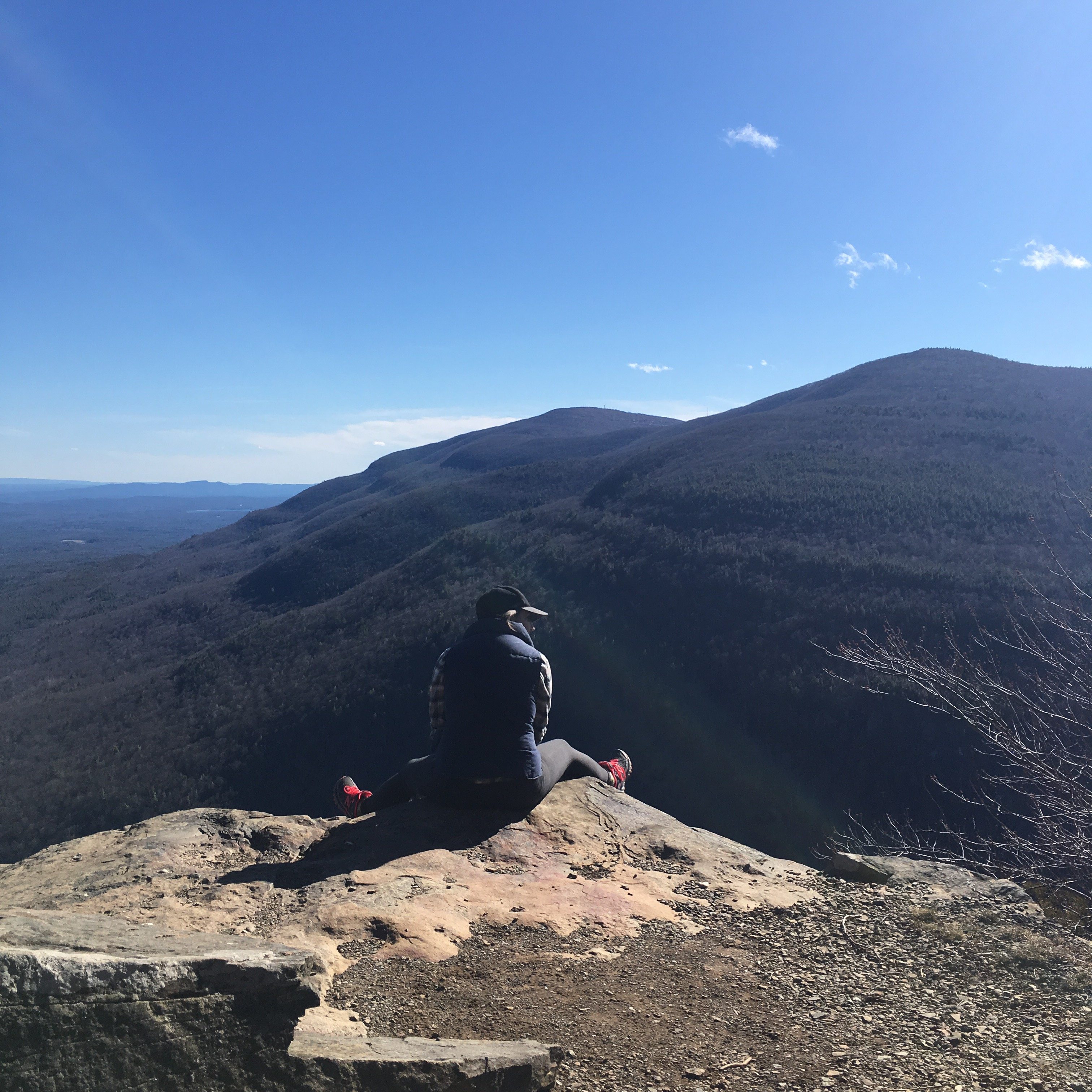 I feel as if everyone has had a stressful start to spring, myself included. When a friend suggested hiking Huckleberry Point, a few minutes outside of Tannersville—a town I have never been to, but will surely be visiting again—I was quick to carve out time Saturday afternoon to enjoy the outdoors. The hike started great, at Twin Peaks Coffee and Donuts, where I indulged in a maple-glazed, bacon-covered donut, and spent the next five minutes licking my fingers clean and wondering if another one was ‘worth it’. Full disclosure, it totally was.

We got to the trailhead and had the foresight to pick up a couple of the walking branches that were piled up near the check-in box. These became invaluable as we started the hike through the Kaaterskill mountains. It was steep in places, and slippery in others, and I can imagine that the hike would have been far less enjoyable if we hadn’t had the extra leverage.

Huckleberry Point is listed in a popular Catskills trail guide as an ‘easy’ hike. Unfortunately for me, I often forget that these guides are created by lifelong hikers who hike every day (probably), and also live in a cave (possibly). The hike had some distinct challenges, which included crossing a fairly intimidating stream by way of a downed tree a little ways off the blazed path. I’m no expert, but if I have to consider fjording a creek when tackling a hike, I don’t think that easy is the right adjective for the endeavor. A sentiment shared, I’m sure, by the obviously ill-equipped young men we passed immediately before the bridge, who were dressed in nice slacks and shoes that were not at all appropriate for a three hour, five-mile hike along the still-snowy-in-places trail.

These observations aside, the hike was fairly pleasant, if a little damp. The rain and snowmelt created an interesting maze of puddles and small streamways through the path, and I wondered aloud to my hiking partner if the trail was created because of these natural runoff lines or if the sock-soaking flows came after. A question better directed to an ecologist or a trailmaker.

At the top of the ridge, after a small rock scramble, there suddenly appeared a bloom of small shrubs and bushes, all calf height. The smooth-leafed huckleberry bushes were bright green among the darker loam, and I’m sure that a few months later in the season the bright smells of berries and laurel would make the highest point on the trail a lovely destination.

We pressed on, and the landscape shifted, turning from silver birch and oak (acorns crunching underfoot) to pine trees. The way was no longer given to roots and bramble, but moss-covered rocks and slippery shale. The evergreen needles obscured the path in front of us, and we continued this way for another ten minutes or so.

I didn’t notice the trees thinning, and when the trail turned and I ducked under one last bough, I was stunned by the views of the mountain range suddenly in front of me. There had been a persistent rumbling noise I had thought meant that we were heading towards the Plattekill River, or some sort of falls, but instead turned out to be air rushing through a low valley in the mountains. Huckleberry Point is in the Kaaterskill Range, and at the top of the hike, on a rocky, stark outcropping called Devil’s Kitchen, you face north. The view is outstanding, and in the first breath absolved all of our earlier troubles. On Devil’s Kitchen, you are directly behind Indian Head, and can see the Overlook Firetower, the Ashokan Reservoir beyond that, the Hudson River to your left, the Kingston-Rhinecliff bridge in full view, and you can easily pick out some towns in between.

My friend and I walked carefully along the cliff, mindful of the steep drop and the dog we had with us. Sitting there, watching the eagles, vultures, and ravens drift across the currents and drafts was centering in a way that both of us needed. In her words, it made her feel small, but not uncomfortable. The kind of small where you feel grateful and blessed to even be a part of it, to even see it, experience it. We stayed there a while, just long enough for us to feel a slight chill.

The hike back seemed to go faster, and again, the branches we had picked up proved invaluable. We quickly got back in the car and headed into town for a bite at Mama’s Boy Burgers. I pointed out Tannersville’s brightly colored homes, asking if the trim color matched my hat. My calves ached, my legs were a little stiff, and I don’t think I felt that particular ache in my lower back until I was dropped off by my car. The journey home also had striking views, winding through the mountains like a rattlesnake. I enjoyed being able to drive on seasonal Platte Clove Road, right next to the creek that had wound its way through the valley. Without the pressure of meeting my friend, I took a minute to stop at the scenic overlook, grinning up at Bastion Falls. Next adventure: Kaaterskill Falls.

Getting back in the car was painful, but I went well under the speed limit as I continued home. I twisted my head up, catching the rocky outcropping of Devil’s Kitchen, only visible for a few seconds as I drove carefully around the curves and turns of the ten mile shortcut in between Tannersville and Saugerties. I was once again struck by the sheer drop, and was grateful once more for my walking stick.

I couldn’t get the fullness of it all out of my head; the bright noise of wind above the Plattekill Creek, the greenery that surrounded us, the space, the big-ness of it all. I know the Catskills are old, and no longer snow topped, but it was still expansive and quietly awe-inspiring. I remember the soft breeze as I looked upwards, watching white-winged hawks and young bald eagles, and feeling small, but in a good way.