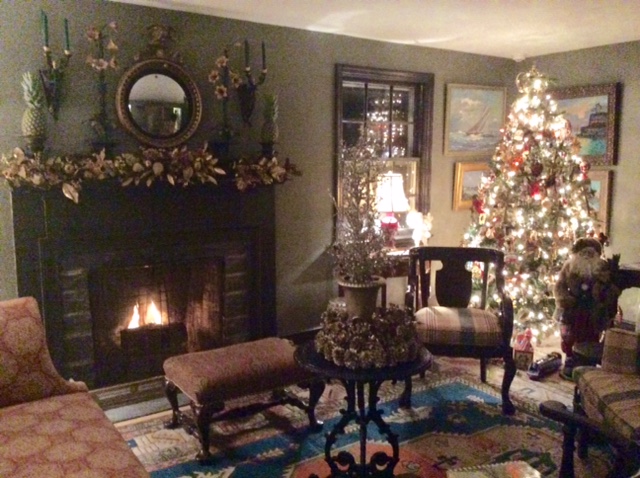 Christmas has arrived, yet another celebration of the holiday season has approached, a season beginning on the eve of Thanksgiving concluding with the birth of 2016 on New Year’s Eve. Wow, the snows of last Winter finally acquiesced to a Summer defined by old-fashioned skies, then suddenly with the crispness of Autumn, the holiday season was upon us yet again. As I sit by the fire with the room aglow and the twinkle of Christmas tree lights, I am reflecting upon the year, its events, the individuals in our lives and times spent with friends in celebration. 2015 was a banner year for a number of reasons, a year which defined our lives in myriad ways. Throughout the year from porch conversations, to garden cocktails, to benefit garden parties, to boating dinners, Gary and I have laughed, drank, dined and danced. So often people ask me what formula is required to make a dinner party, a cocktail party or a celebratory event successful. For me a successful event of any scale requires planning, advance preparation, a thoughtful pairing of guests and a well-conceived menu. As the years have progressed I have created my own methods for entertaining, methods which have served well through a minefield of events. 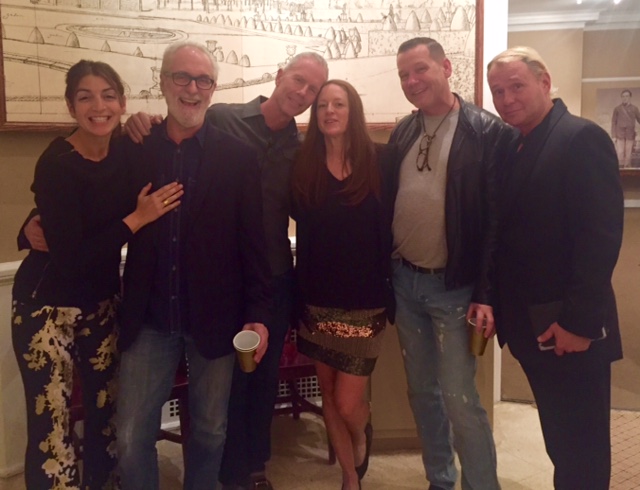 With the searing question of formulas for entertaining ringing in my ears, I decided to call an expert, my friend Mary Giuliani. In the forward to Mary’s recently released entertaining book the Cocktail Party, Mary’s business partner and friend Mario Batali conveys the essence of how Mary has become the go-to catering resource for the design worlds, of fashion, beauty, and decorating. An A-list celebrity caterer touted from the cat walks of the fashion industry to the red carpets of film premiers, to the halls of the TriBeCa Film Festival, Mary has become a recognizable face in the culinary industry. As Mario eloquently states, “Mary definitely puts the FU in fun and the yum in delicious, and this remarkably sweet, spicy, and tangy book captures all of the magnificent simplicity of Mary’s food and at least half of her incredible wit, passion and joy for something done deliciously and perfectly right.” High praise indeed from one of America’s top chefs. Over the years, I have worked with a number of caterers and event planners in Washington DC, Manhattan and the Hudson Valley. For example, there was the rather dandified Prada wearing event planner, who with much aplomb, offered to create a dazzling event with tables draped in flowing Swarovski Crystal tablecloths, for a sick children’s charity (ummm no!). Then there was the stern, starched German caterer, who stated his events are crisp, clean and everything from the menu to the decor is minimalist (wow, that sounds like fun… not!). Then there is the svelte, charming and delightful Mary. In many ways Mary is a lot like the girl you knew in college, attractive, fun, with an intoxicating warmth and charm, the kind of girl you want to hang out with. Arriving ten days ago, as a complete stranger to the Meet The Designers Event for Holiday Design House, Mary quickly charmed an audience of 120 people. Her pig in the blanket buffet paired with her Sicilian Mistletoe Cocktails were a huge hit. No wonder the Golden Notebook, who were on hand selling copies of the Cocktail Party, quickly sold out. 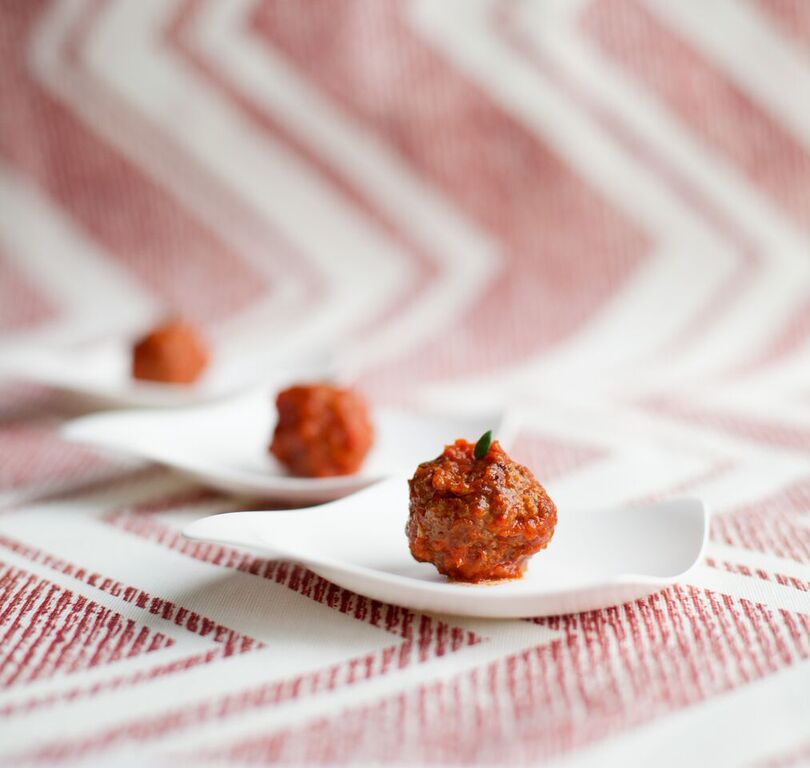 Entertaining should be a fun endeavor, an enjoyment for the host, but more especially a joy for the guests. Mary, who has worked with everyone from the Rolling Stones to Vogue, to Carolina Herrera to Bradley Cooper, is an expert in the art of joyous entertaining. In the Cocktail Party, entertaining suggestions range from turkey with cranberry on mini pumpkin muffins for Thanksgiving to mini sausage and egg grilled cheese for New Year’s. As Mary states in the Christmas section, “Christmas for me is all about food, food, and more food, so the idea of serving just a few small bites and some bread and cheese could potentially send my Italian ancestors rolling over in their graves.” A girl after my own heart—as a perennial host the thoughts of under serving my guests, sends shivers up my spine. Rather than complicated, over-complex menus, Mary’s suggestions, “find a really nice way to take all the traditional large family meals down to a few delectable small bites that will still be packed with all the flavor that one expects at a holiday party.” As Mary notes, “my Christmas cocktail party is Italian inspired (and taken from our MARIO by Mary party menus,) mostly because my two biggest food influences are my Sicilian grandfather Charlie, and my friend and favorite food collaborator Mario Batali.” If the Papa Charlie’s Mini Meatballs in Tomato Sauce recipe featured in the Christmas Section are any indication of Grandfather Charlie’s culinary expertise, he is indeed a master chef. 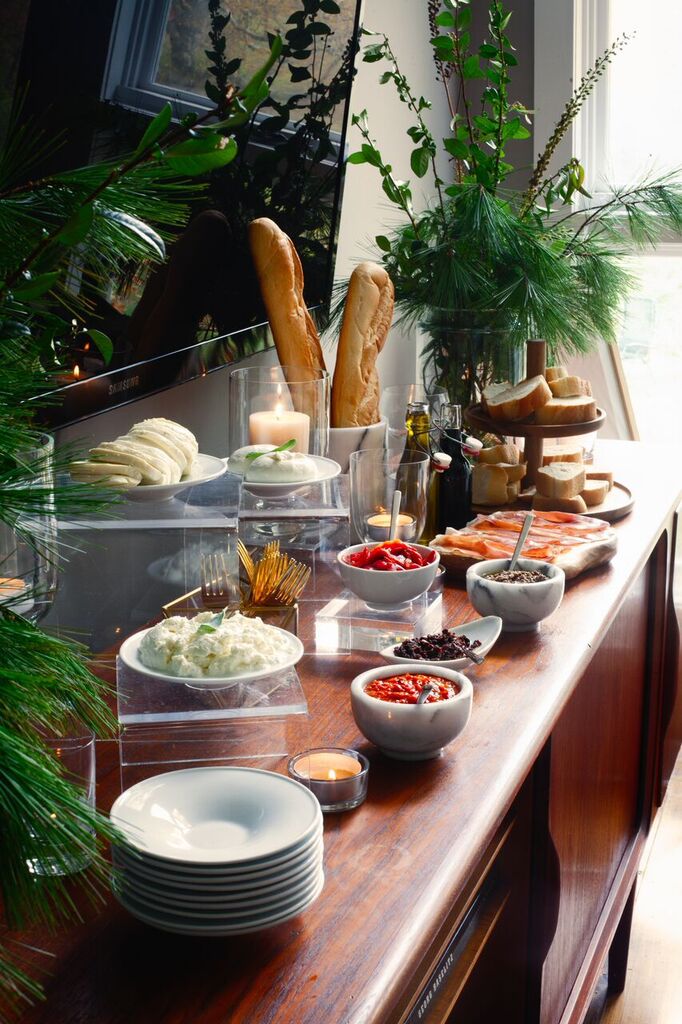 Entertaining with an eye for whimsy, and an approach which brings guests into the culinary experience are Mary’s talents. One example, the Mozzarella Bar, “reinvents” the standard cheese board. The Mozzarella Bar features, three types of cheeses—Burrata, Mozzarella (salted or unsalted), and ricotta—each selected for their divergent textures. By arranging the Mozzarella Bar on varying levels, displaying the cheese on higher plateaus the cheese becomes the star attraction. Arranging quantities of thinly sliced prosciutto, pepperoni and Italian Sausage on wooden boards placed beneath the cheese elevations enhances this station’s appeal. Items like eggplant caponata, roasted peppers, romesco sauce, and olive tapenades, “are wonderful complements for cheeses and all can be store bought, if you do not have the time to make them,” concludes Mary. Naturally balsamic vinegar and olive oil are a must for the Mozzarella Bar. Pre-sliced bread, and non sliced bread loaves add a hearty country appeal to this assemblage. Four inch cocktail plates, forks and napkins complete the presentation. Mary by the way is a strong advocate for the usage of disposable plates during Holiday time. “There are so many great eco-friendly disposable plates and flatware available that both look great and will save you clean up the next day,” comments the savvy caterer. 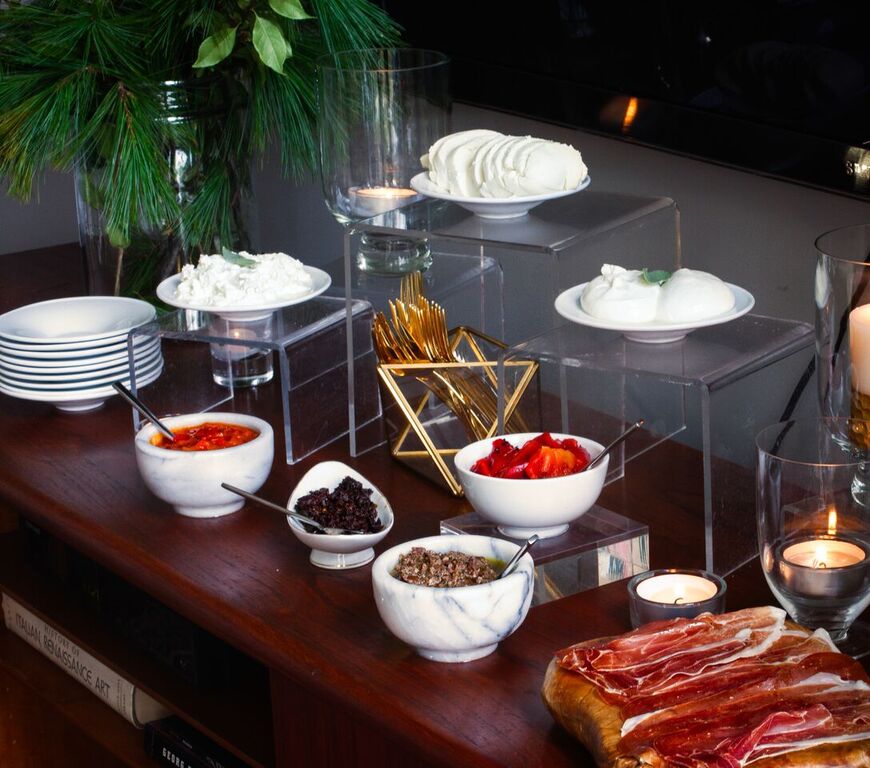 The Mozzarella Bar; by elevating the cheeses on plateaus, the cheeses become the stars of this modern spin on the cheese board

In essence the prevailing formula for entertaining on any scale but in particular for the cocktail party, is a successful mixture of ingredients: preparation, attractively presented menu options, and a prevailing atmosphere which engages the guest. So often entertaining and culinary guides offer complicated recipes or present lingering questions as to the how to’s of arrangement. Skillfully Mary, via the Cocktail Party, breaks down each section into four parts: Eat, Drink, Play and Recover, eliminating any grey areas which might arise as you prepare to host your next event. The Cocktail Party, like Mary, is a breezy, charming celebration of hosting events. In fact I guarantee, once you turn through the pages of the Cocktail Party, your mind will be a buzz with options for your next entertaining fete.

The Hudson Valley, of 2015 has been an endless tale of expansion, real estate sales and dual residents converging together with local residents. Mary Giuliani, along with her husband Ryan and daughter Gala are just another personification of this dynamic. The rather engaging Giuliani’s like so many of late from the worlds of fashion, film, and decorating have become dual Hudson Valley residents, splitting their time between Manhattan’s Chelsea neighborhood and Woodstock, NY. This holiday season, from clinking champagne flutes on Manhattan’s Upper Eastside, to the hipster haunts of Brooklyn, to the lofts of Williamsburg, the names of Hudson Valley counties and cities continually creep into the conversation. Individuals like Mary and so many others are enhancing the beauty of the natural landscape by deciding to call the Hudson Valley home. What better way to celebrate the region during the holiday season.