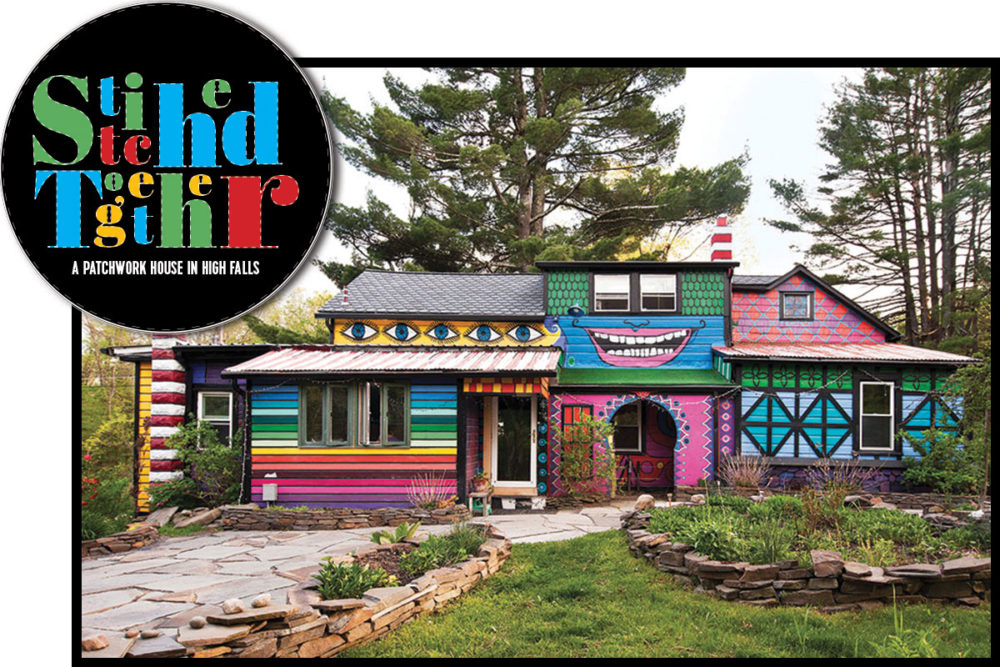 This story begins with one lost glove.

Kat O’Sullivan had just returned to her Brooklyn apartment when she got a message from a customer. “I’ve lost a hand warmer, can you make me another?” Every coat, dress, and set of “hand warmer” gloves O’Sullivan creates for her popular Katwise Etsy shop is singular. She combs thrift stores throughout the Northeast to find the wool and other natural-fiber sweaters she then upcycles into her one-of-a-kind pieces. “I can never, ever, make another glove,” she recalls, “but I had just gotten back from the thrift store with that exact sweater.” It was a rare sweater and an even rarer coincidence. O’Sullivan wrote back, “Yeah, I guess I could make you that glove.”

She’d never met the customer, Pamela Camara, but after re-creating a match and preparing to mail it, she noticed the return address: High Falls, New York. “When you are sitting in industrial wasteland Brooklyn”—where O’Sullivan was living with Mason Brown, her partner in travel and creative living—“High Falls sounds like a pretty name.” So O’Sullivan decided to ask: “What’s High Falls like?” Camara’s answer came immediately: “It’s great! What are you doing this weekend?” 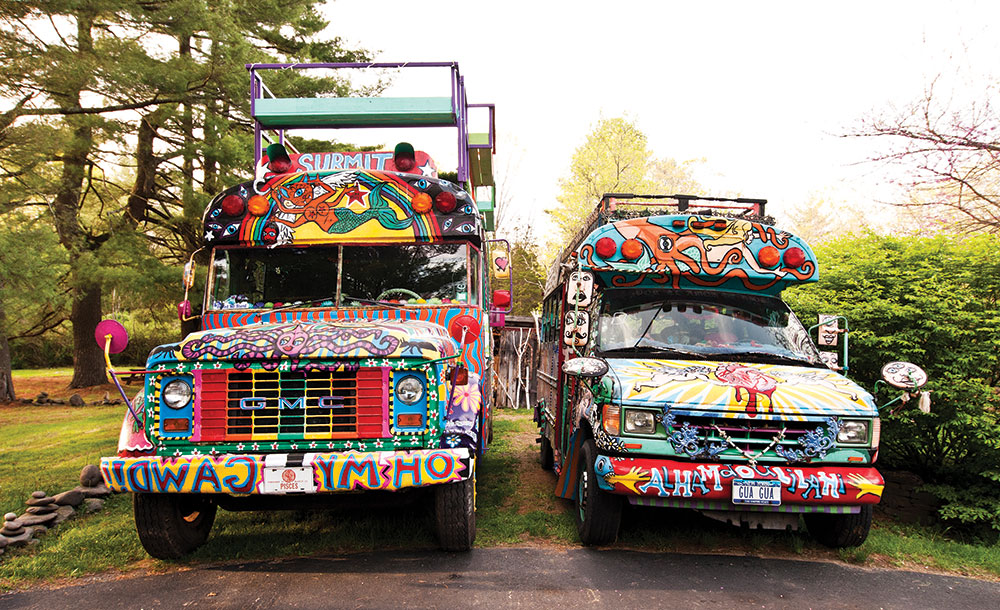 A Pair of Vagabonds

Tired of “being kicked around and kicked down” by the city, O’Sullivan and Brown were already considering relocation. A vagabond at heart, O’Sullivan had spent 15 years exploring the world and making crafts, living in a multicolored van and a school bus everywhere from California to the East Village. (Both vehicles, now parked in their driveway, complement their rainbow-colored house.) Equally well traveled, Brown has a degree in Middle Eastern studies, speaks fluent Arabic, and lived in Jordan before becoming a musician in New York. The two were looking for a place that could not only honor their spirit of wanderlust but also allow them to “put down roots and create.”

That one lost glove, and the invitation that followed, opened a world for the couple. The next weekend, O’Sullivan walked into the former Egg’s Nest restaurant in High Falls (decorated colorfully with bric-a-brac) and realized “ .” Brown loved the area as well. “We had no idea,” he says, “what a great place this side of the Hudson was.” Camara, a local African dance teacher, became the couple’s unofficial godmother, introducing them to the community they grew to love. (Since then, Camara and O’Sullivan have even traveled through Africa together and discovered they’re distant cousins.) 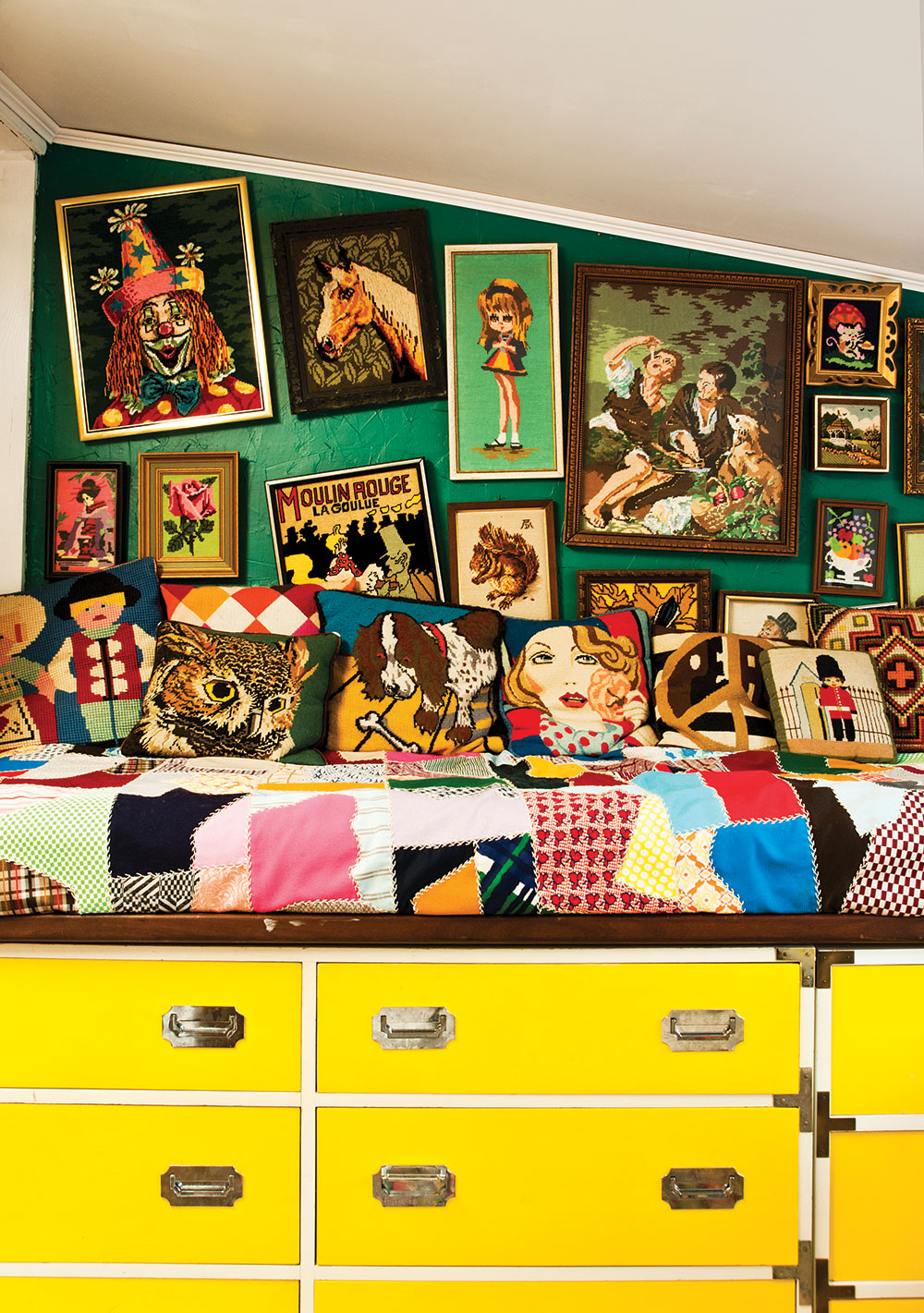 During one of their mutual adventures—a trip through Mongolia involving many delays—the couple began writing a list detailing their dream house. In 2010 they found the perfect fixer-upper to upcycle: a patchwork house in Rosendale sitting on 16 acres, bordering the rail trail and state-owned forest. In business and life, O’Sullivan often meditates on the material things that cross her path—“where they’ve been and whose hands have touched them.” Owned by one family for 60 years, the house was rich with memories and spirit. This appealed, and the couple felt a connection to the seller, Faye Schwager. “If she hadn’t been here I don’t know if we would have bought it,” says O’Sullivan. “We feel like we had the house passed to us.” The couple relished the opportunity to make the home new again. It was, however, going to need some work.

On their first night as homeowners, the couple literally dug in. Armed with tools and a bottle of champagne, they began to tear up the linoleum floors, quickly realizing there were actually seven layers of it under their feet. It was a harbinger of what was to come. “We didn’t quite realize how much we were going to have to do,” Brown admits. Dating from 1840, the house was “addition after addition after addition.” Too much love and weather had left it in disrepair. Eventually, almost everything—from the septic tank to the well, from floors to the five layers of roof—had to be painstakingly dissected and then either rebuilt or totally replaced.

Luckily, friends from the city and their new neighbors were on hand to help. The almost total teardown also yielded some treasures: Letters from the 1850s, newspapers from New Zealand, and accounts of the Foreman-Ali “Rumble in the Jungle” lay within the walls. And they were able to incorporate much of their original Mongolian wish list into the design. (Aquarium wall? Check. Circus tent? Check. Fireplaces? Library? Hammocks? Check, check, check.) 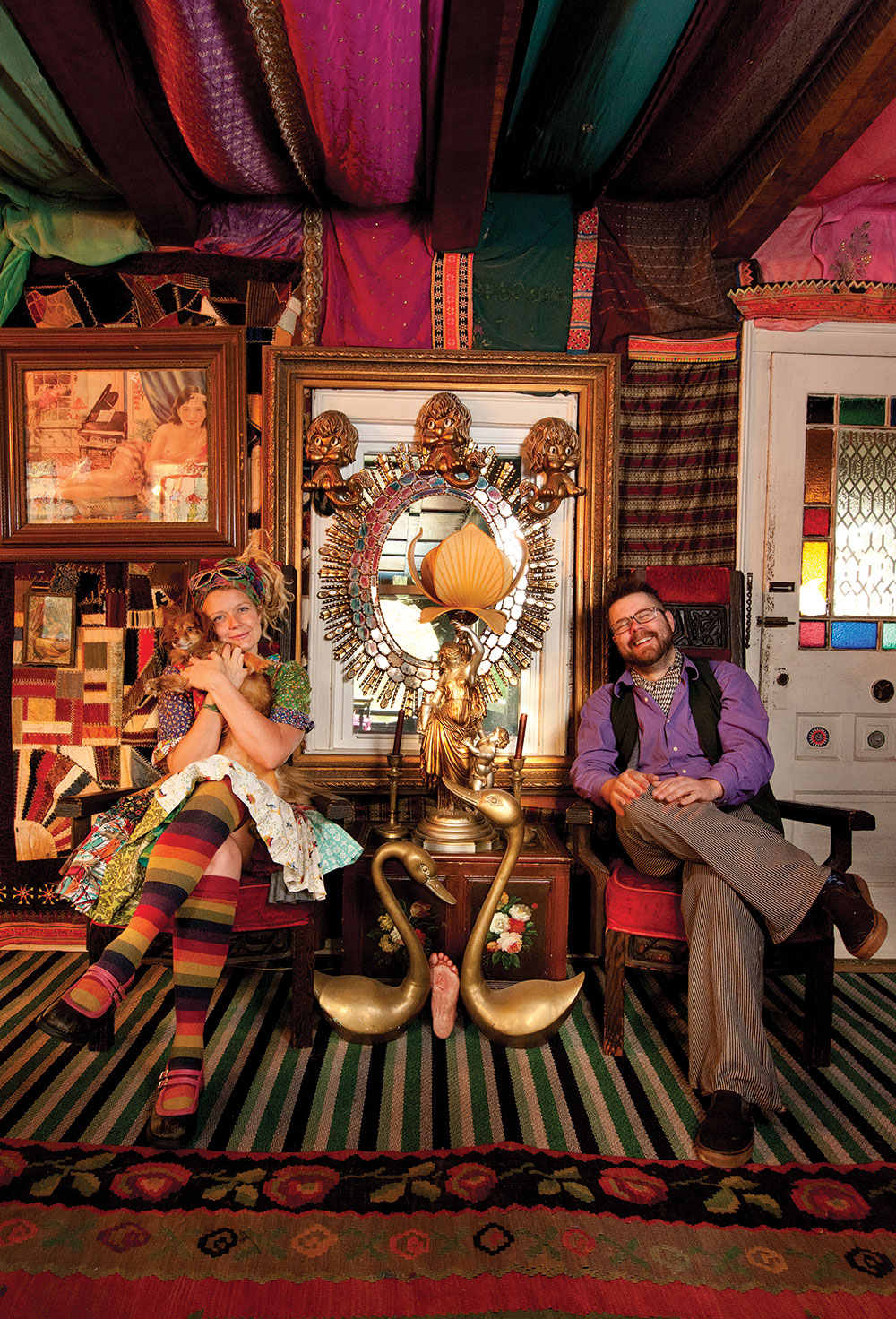 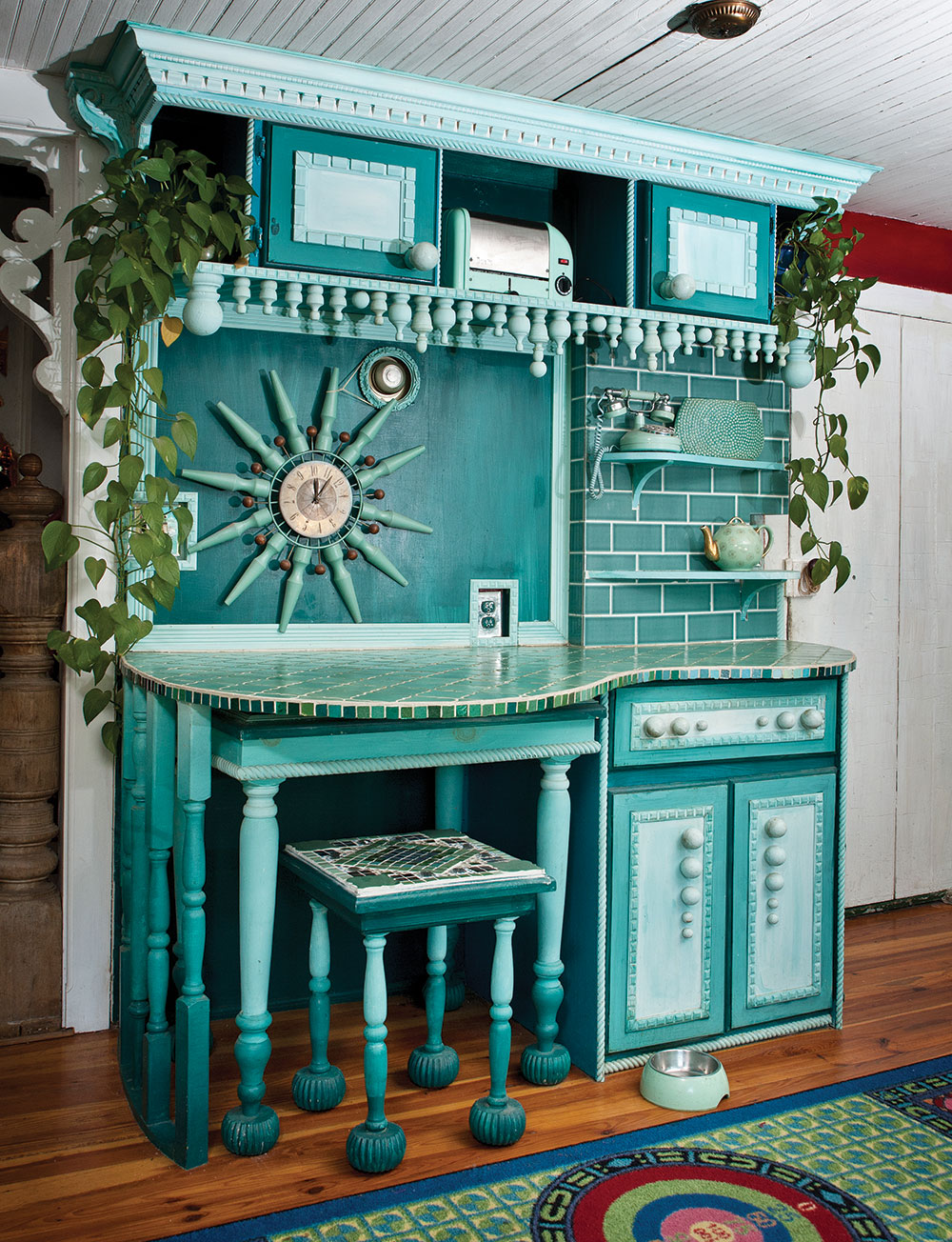 Made Especially for You, by Katwise

As with much great art, the couple claim the home is still a work in progress. However, the eye-catching exterior now slows passing bicyclists and inspires tourists to regularly stop and take pictures. The ornate, rainbow-painted walls harmonize with the bright gardens and flowering trees. Gingerbread trim, along with windows and doors from Zaborski Emporium architectural salvage in Kingston, complement the stone walkways and patio O’Sullivan built by hand. A summer of brush clearing uncovered a large pond where the couple occasionally swim.

Throughout the interior, wood floors face off with tin ceilings. Each room is carefully designed to honor the artwork and artifacts the couple have collected over the years. Many pieces, including Brown’s childhood rocking chair, are covered with O’Sullivan’s patchwork designs—her version of the Midas touch.

In the kitchen, a turquoise toaster spread “like an infection.” Now countertops, a 1957 GE Liberator stove, and the home’s original farmhouse sink are painted the same hue. A sunny breakfast nook, still etched with the heights of the Schwager children, overlooks the pond. Brown, currently a graphic and Web designer, has a study complete with his grandfather’s working phonograph and a collection of globes. A wooden bookcase, handmade by a neighbor, hides a secret-compartment liquor cabinet. (That’s another check on the Mongolian wish list.) O’Sullivan keeps the wainscoted, arched ballroom empty. It doubles as photo studio and occasional clearing area for her business. 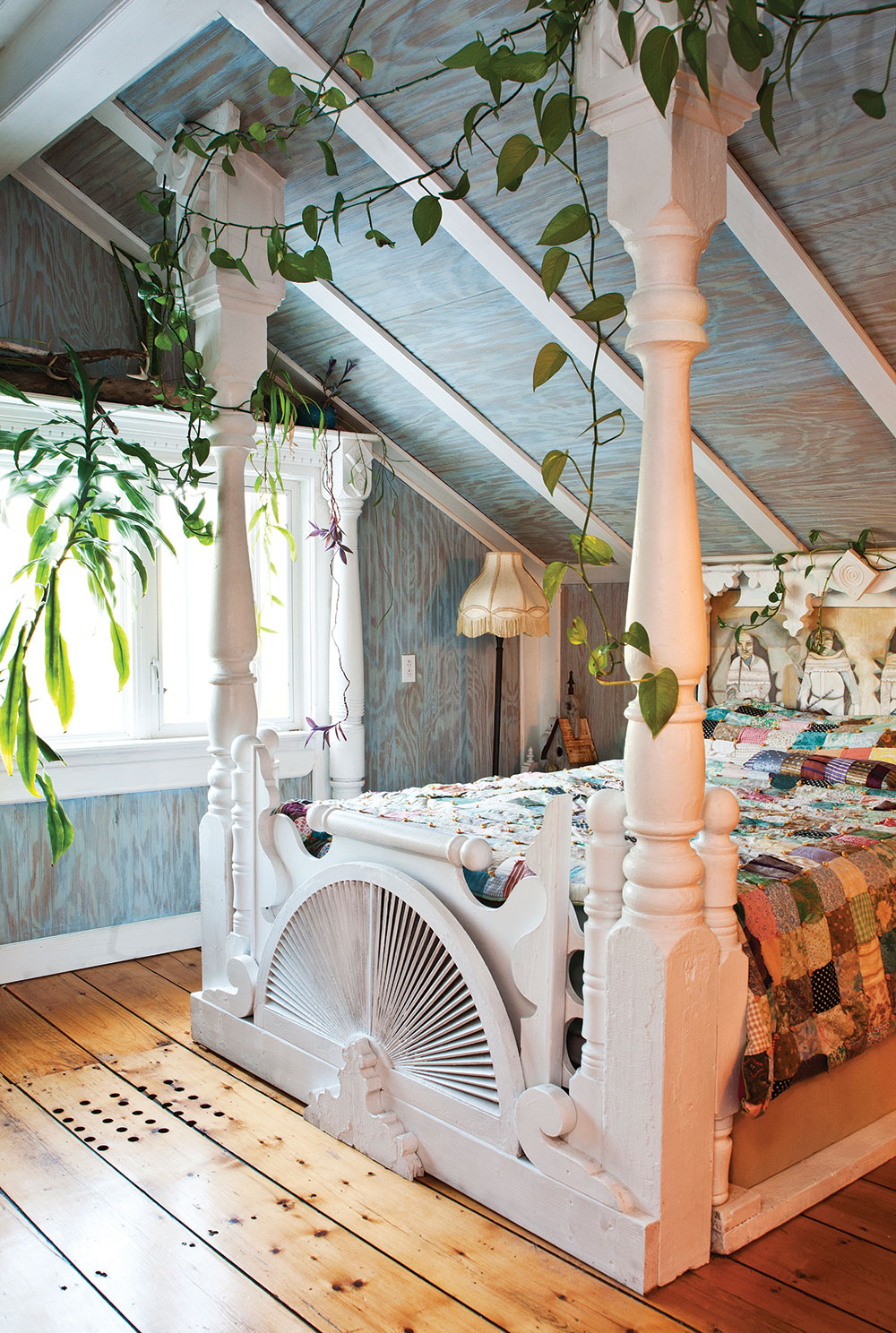 Upstairs, the almost bare white-and-gray bedroom with built-in four-poster bed contrasts with the rest of the house. An adjoining sewing room and attic were repurposed as O’Sullivan’s workspace by raising collar ties and adding skylights. Her collection of needlepoint art lines the walls. “I think about how many millions of hours people put into making these things. They’re often in a bin for two dollars. I just need to save them.” O’Sullivan feels the same way about the quilts she finds and, of course, the sweaters, which often have tags saying “Made especially for you by Grandma.”

“I treasure them,” she says. “Anytime I get something hand knit I think about how someone spent all winter working on it. It feels like a privilege I have now—a responsibility—to take it and make something nice.”

Those handmade treasures, discarded but not forgotten, are now organized by color into piles on the bright, lake-blue attic floor, awaiting transformation. It’s a visual reminiscent of the photos tourists so often take of their house. Amidst the scraps of hard work and memories, O’Sullivan models her latest creation, a bolero jacket of jade green and hunter wool. Strewn on the floor beneath her feet: the scraps of that project, soon to become new gloves. 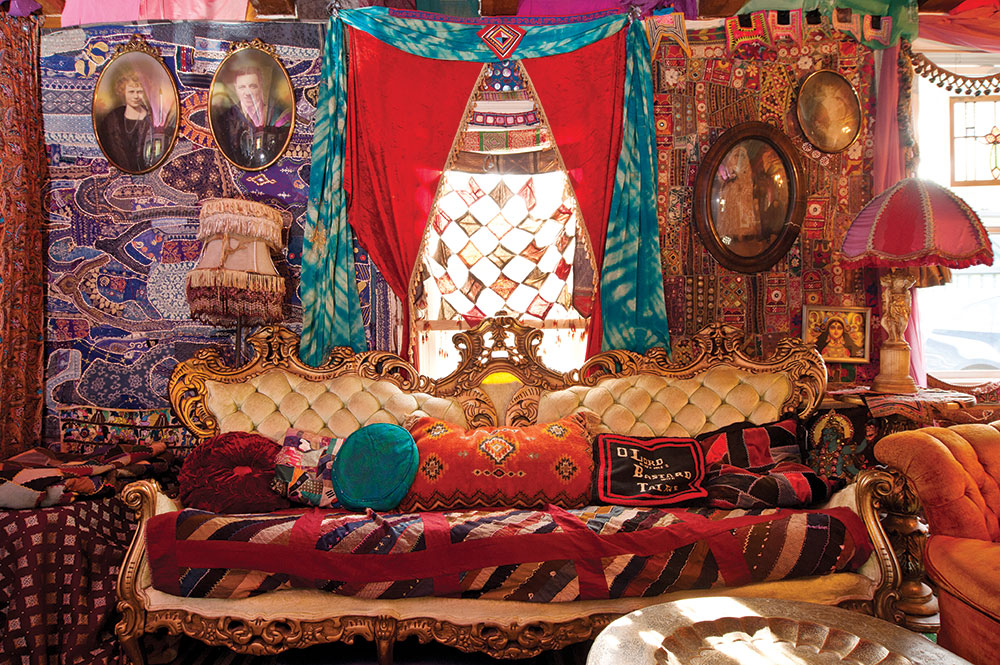