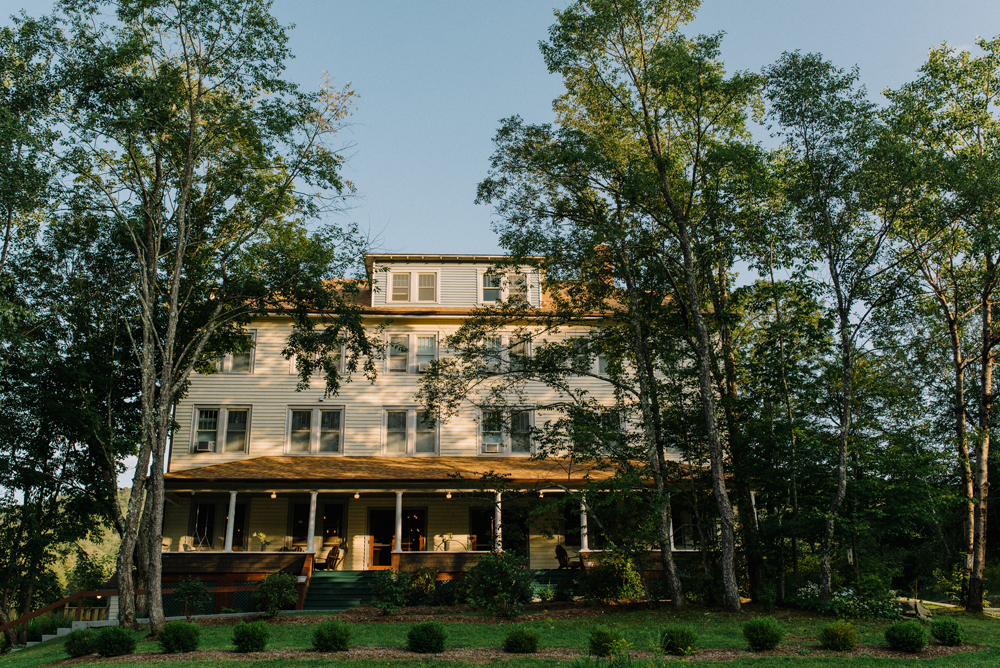 The DeBruce has been a hotel since the 1880s. Photo by Lawrence Braun

Sims Foster grew up among the pines and trout-rich creeks of the Sullivan County hamlet of Livingston Manor. The DeBruce, among the many hotels and restaurants now run by Foster and his wife, Kirsten, as part of the Foster Supply Hospitality group, celebrates that sylvan setting with four-star service and a restaurant that’s earned accolades nationwide. (Other upstate accommodations include the nearby Arnold House, North Branch Inn, and Nine River Road.)

The DeBruce is stately, with a gentle sense of permanence that comes from the building’s legacy as a hotel since the 1880s. A wide, covered front porch welcomes guests with twin, forest-green stairways. Twelve guest rooms fill the three-story hotel, each with its own tiled, ensuite bathroom (a few are two-room suites). Vintage paneled doors, deep chestnut trim, and double-hung windows evoke a nostalgic Catskills ethos tempered by clean, neutral-colored walls and furniture. Despite the rural setting, you can bed down here in full luxury with down duvets, Sferra linens, and Malin & Goetz toiletries. Fireplaces are sprinkled throughout the hotel, stacked with huge river stones that were likely plucked over 100 years ago from the creek that runs through the property. 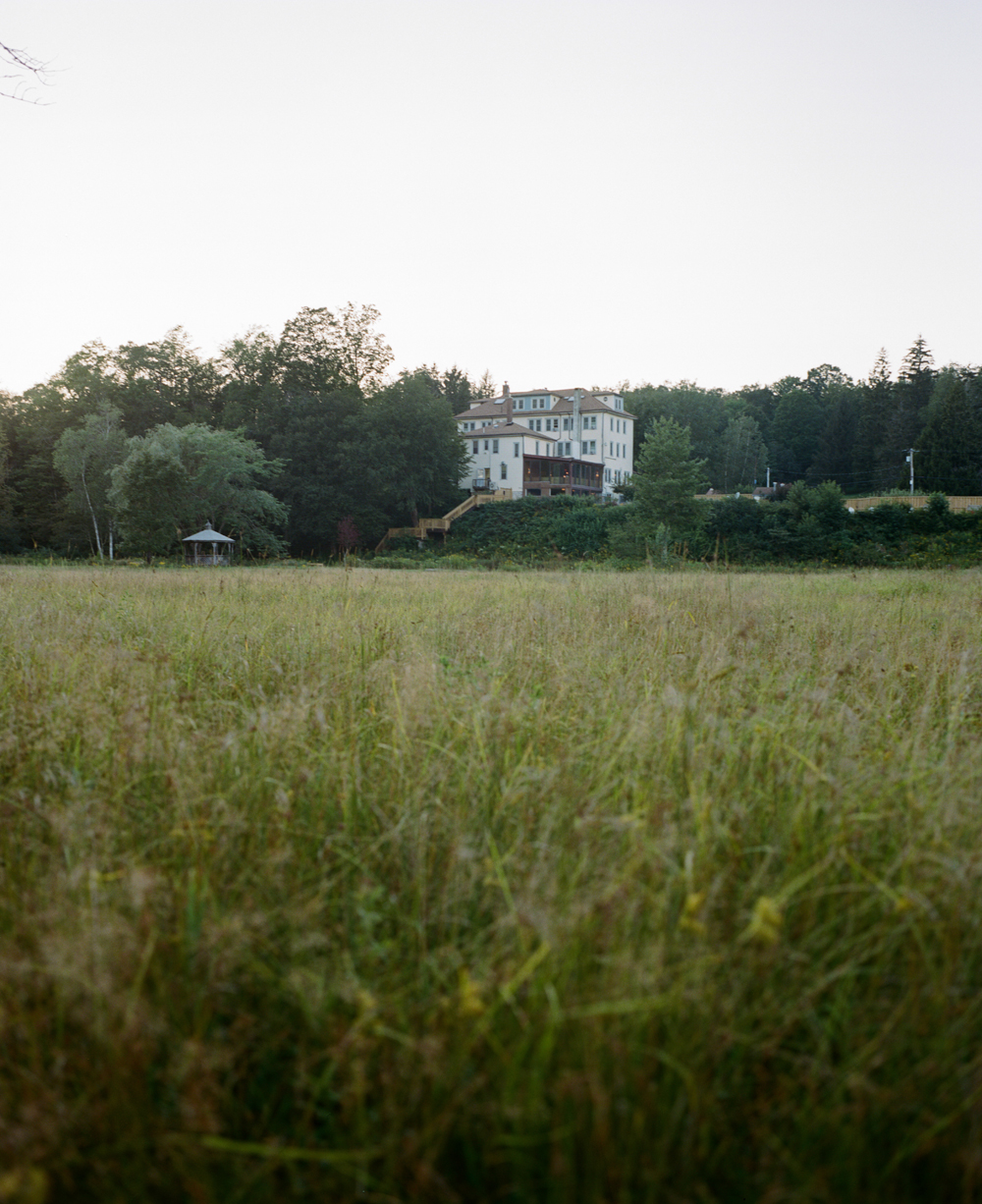 The DeBruce encompasses 600 acres, with five miles of hiking trails and a half-mile of private waterfront access to the Willowemoc Creek, which is renowned as the birthplace of American fly-fishing. In fact, The DeBruce offers 90-minute fly-fishing lessons for newbies through its partnership with Dette Flies in Livingston Manor, the oldest family-run fly shop in the world.

And—since The DeBruce has thought of everything—the Tackle Room, just beneath the main dining room, has guest lockers to stash fishing equipment and wet waders. In the summer, guests are welcome to relax by the inground pool, or even splash in the swimming holes on the property. Offsite itineraries are available for guests who want to explore the area and its covered bridges, breweries, and distilleries. 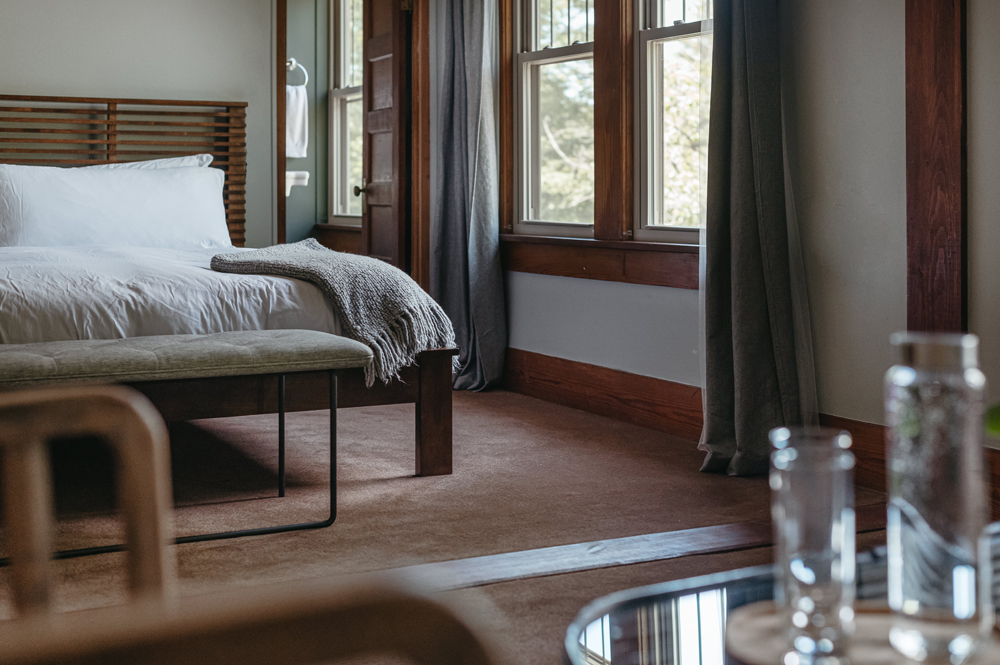 Guests have a true sense of being cared for at The DeBruce; all they need to do is show up, get comfortable, have fun, and eat well—and the culinary program is where The DeBruce really shines. The inn celebrates its fifth anniversary in May, but has already excelled: Conde Nast Traveler named it one of the top 100 hotels in the world in 2018; that same year, it landed the number six spot on Esquire’s list of the best restaurants.

For the past two years, the hyperlocal kitchen at the DeBruce has been helmed by chef Eric Leveillee, who honed his craft in Philadelphia at La Croix at the Rittenhouse Hotel; Marigold Kitchen; and Vernick Food + Drink. “I’m inspired by the Willowemoc, the mountains, and the menus of the historical hotels of the area,” Leveillee says. “We focus on local ingredients and are inspired by the nature that’s all around us.” 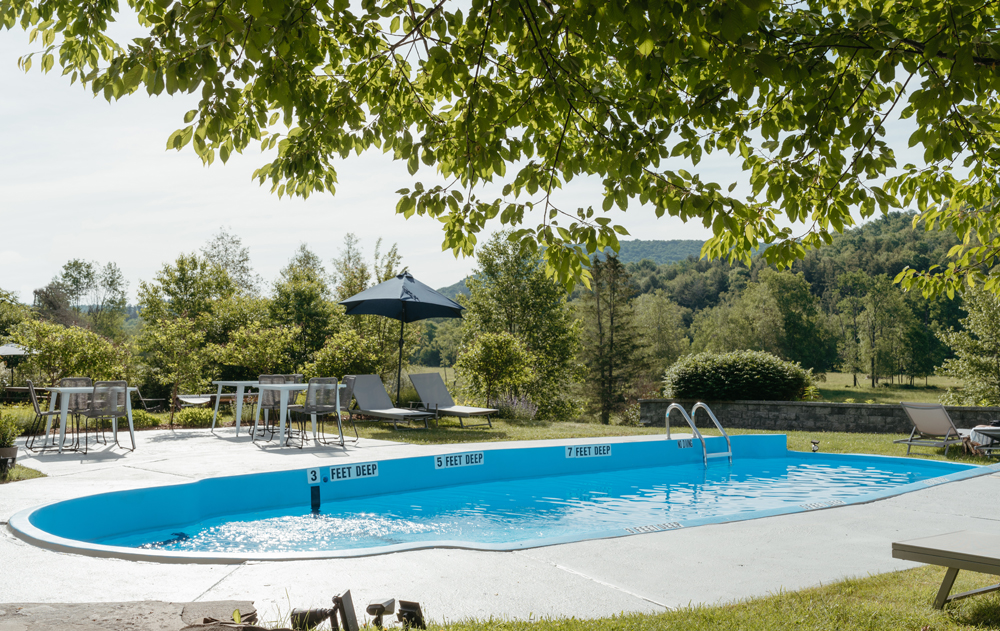 Diners in the main dining room can gaze through the walls of sliding windows into the forested mountains, where some ingredients for the meals they eat might even have been foraged earlier in the day. The DeBruce works with locals in the area to source quantities of the herbs and wild plants that are found on the property.

The menu is constantly evolving, and the DeBruce’s signature tasting menu currently includes 14 courses, including a thoughtful medley of items like kombucha, housemade bread, snacks, a salad of mushrooms, and dry-aged duck with a sauce of reduced vinegar and herbs. Past menu offerings have included venison tartare, served on an antler; white asparagus, cooked risotto-style, with horseradish and dill; fermented potato bread with homemade butter; and housemade “chocolate”: burned bread ends, ground up and mixed in a tea of foraged tree bark. 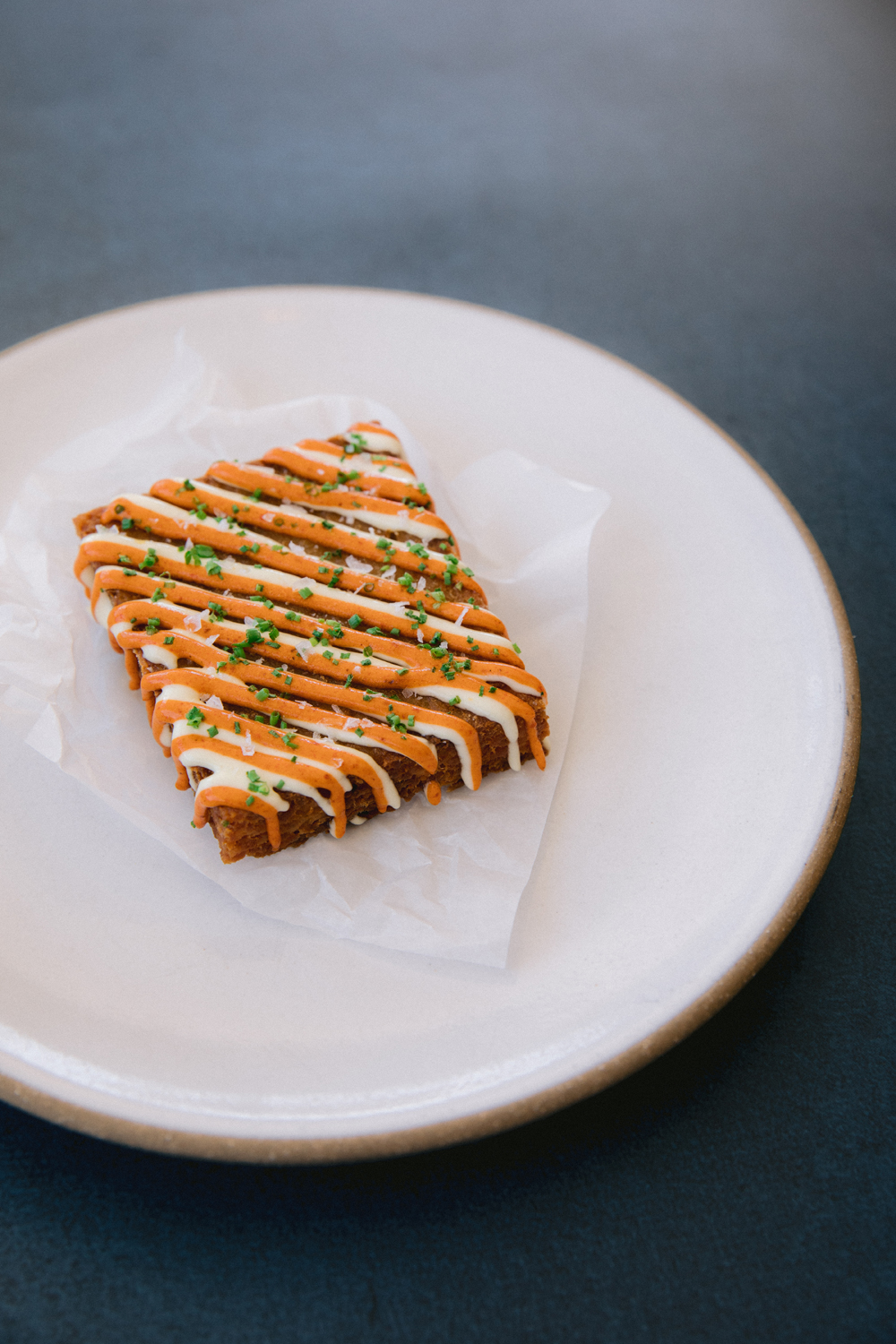 The DeBruce’s menu planning takes into account the day of the week, Leveillee says. On Friday, when guests arrive, they’re looking to decompress with a glass of wine and familiar, comforting food; so, they’ll dine on an a la carte menu that’s more casual, with small plates they can order and share.

The next morning will kick off with a meal that is, in the chef’s words, “unlike any breakfast they’ve had before.” Instead of bacon and eggs, expect smoked trout congee with dry-aged Hudson Valley beef. “These are curated dishes, meant to carry what we believe in—nourished by the inspiration that’s all around us—for the extent of their stay,” Leveillee says. 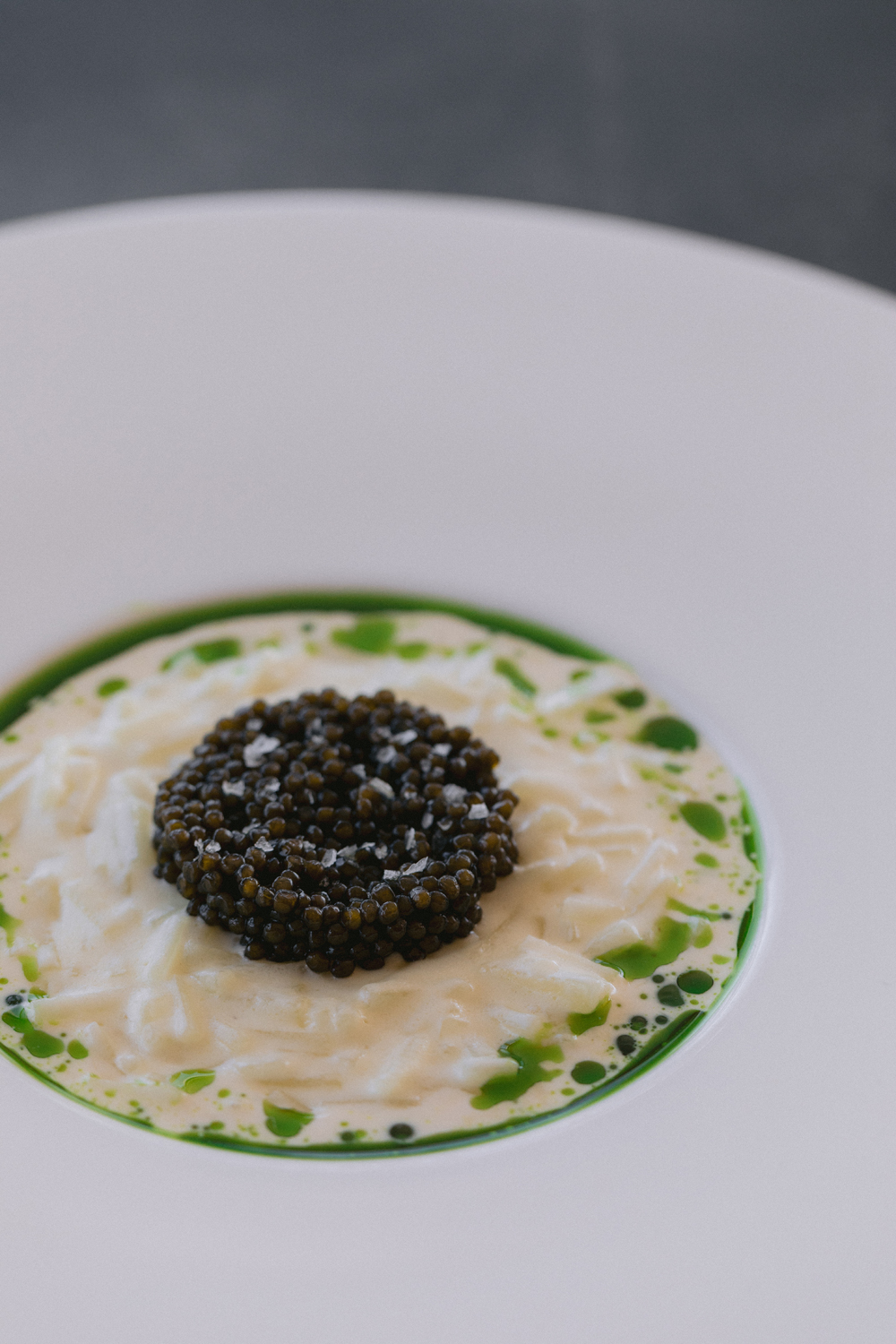 Potato risotto with caviar and chive. Photo by Sasithon Pooviriyakul

The Saturday dinner is the showpiece of the DeBruce. “The food is run by the kitchen staff,” Leveillee says, “so we’re interacting with the guests and talking with them about the food they’re about to eat.” The open kitchen allows diners to see the chefs plating the dishes, too. “It’s a level of connection you don’t see in other places,” he says.

The spirits and beer list is informed by the bevy of local breweries and distilleries that pepper the Willowemoc Valley, like Upward Brewing Company and Catskill Brewery in Livingston Manor, and Do Good Spirits in Roscoe. 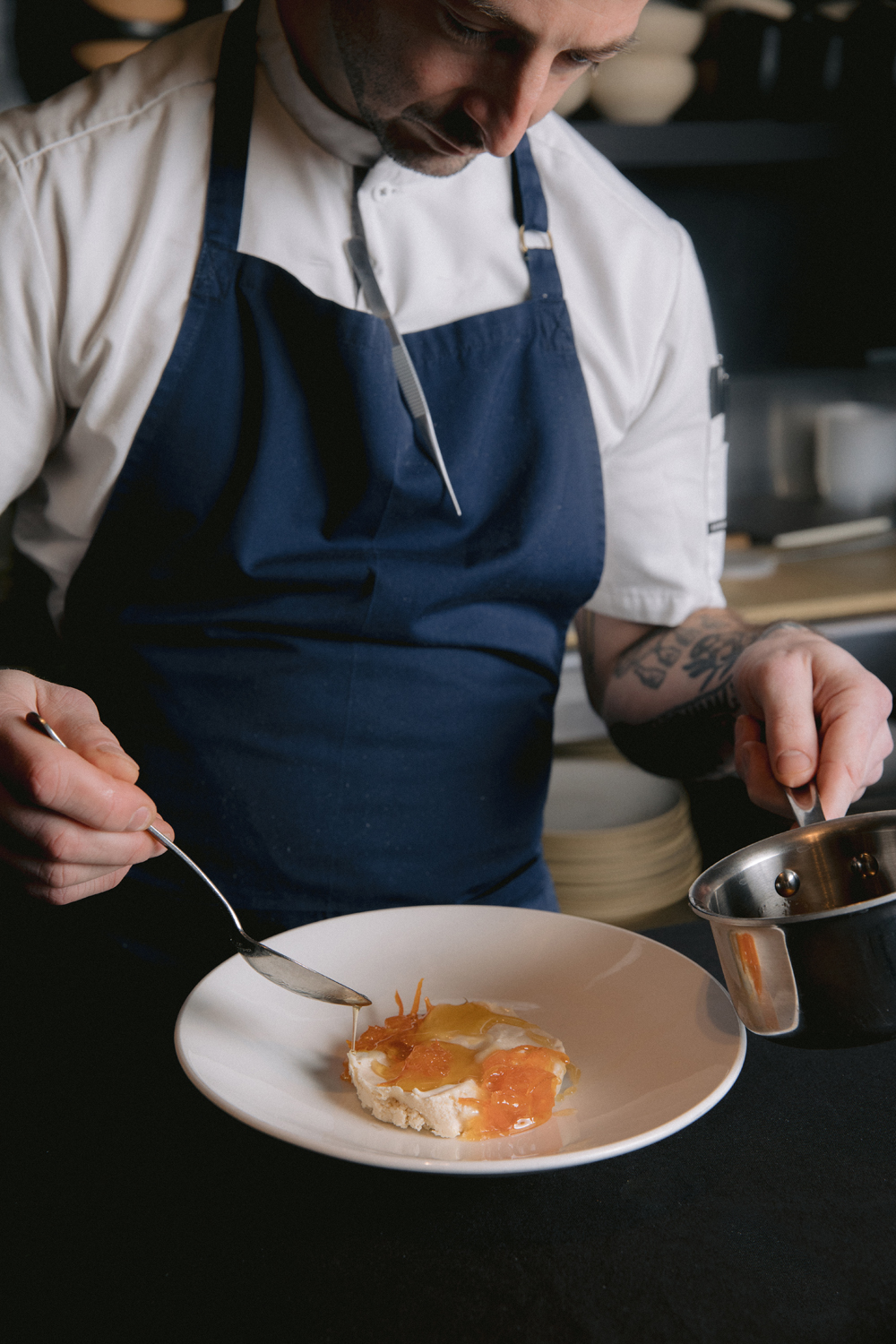 The hotel and restaurants are open year-round, but are closed on Mondays and Tuesdays in the colder months. All stays include breakfast and dinner. Both the main dining room and the cozy, casual Club Room are available for guests, and are also open to the public.

Even with the praise that continues from guests and foodies alike, no one at The DeBruce is happy just sitting on their laurels. “We are continually trying to elevate the bar we set for ourselves,” Leveillee says.