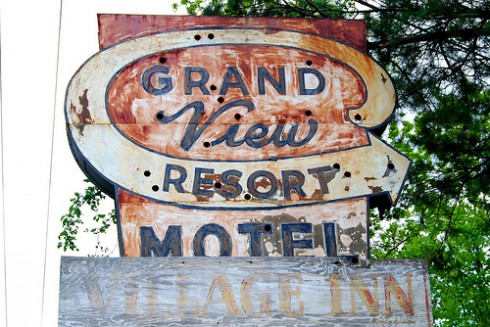 That’s the subject of a photo essay in the NY Times, in which 32-year-old photographer Marisa Scheinfeld revisited the resorts of her youth in the Catskills. But instead of bustling with the Borscht Belt goodness of her younger days, “Nature was reclaiming the spaces,” she says. “You would see an entire room filled with a carpet of moss. Then there was vandalism, people gutting the buildings for wiring and other metal, anything they could take. Then there were squatters and taggers. Then paintballers, who put their own marks on the places.”

She documents what she called “the new life” these buildings were taking on, creating what the Times calls “portraits of destruction as well as rebirth, now numbering almost 100 photographs.”

For us, admittedly obsessed with those aged and ailing resorts, the project encapsulates the sadness of this section of the world, and the new life we envision for it is not about moss-covered floors (although that could be cool); we’d prefer for a new generation of humans to take up residence there. So perhaps her project will pique the interest of those truly interested in reinvigorating the Catskills bungalow colonies and Hudson Valley resorts, instead of just lamenting what’s gone wrong.