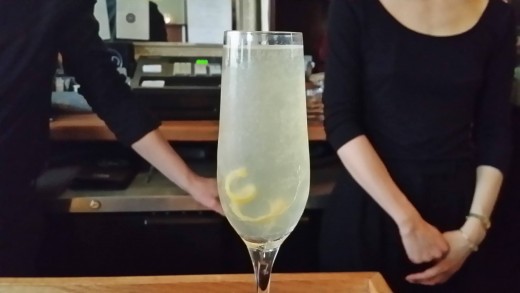 I’m not a millionaire. On a good day, I’m more like a thousandaire. And yet, I love a great meal and a well-made drink. Or four.

For that reason, sometimes minor dips into debt are worthwhile. And if I’m going to go temporarily broke in my new upstate residence, I want to do it all at Duo Bistro.

I recently moved to Kingston, but it’s a locale I’ve always loved. The people here know how to sprinkle the right amount of sarcasm onto a sentence. And only a fool could deny the pervasive beauty.

I may be a lot of things, but I’m definitely not an F-word. I’ll never quite understand the people who think Yelp is a synonym for complain, people who use obscure cookware no one can understand. Of course, I don’t argue against the Foodies in the sense that a palate can be cultivated. But if we are capable of being gratified, then we should count ourselves lucky instead of actively seeking out flaws and broadcasting them over the internet.

So yes, I’m bolting out of the gate with bias. Whatever Duo serves me, I will probably love. Because I want to be in love.

They’ve earned this love, though. Even before I was a resident, many of my upstate trips were punctuated with a perfect brunch at Duo — the Chef’s Breakfast, the Rye French Toast, the unstoppable omelet trio. And some of my best nights since moving in have been spent with friends here, poking holes in my theories of self-surgery and always leaving wondering how the time and the food disappeared so quickly. 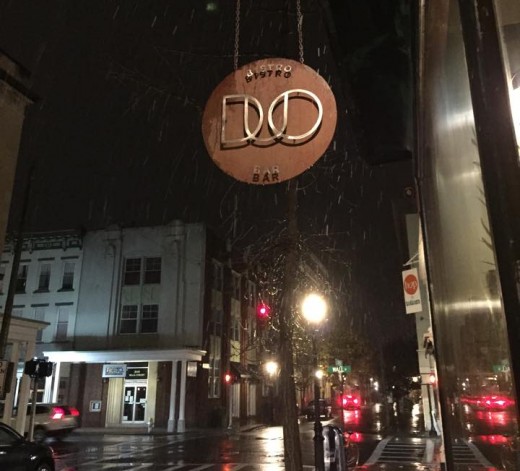 This evening, I’m having the prix fixe dinner on a rain-soaked Monday man-date with my bandmate, Chris Hansen.

The place is dimly lit, a warm and dry refuge. The patrons all seem to know the right volume setting for their voices. We’re seated at the window by our soft-spoken waiter, Matthew. I point out that he has an incredible first name. He nods and smiles.

Cocktails are in order. I have a Yuzo Mojito and Chris orders a whiskey drink with jam. I refuse to try his drink because I’m perfectly pleased with mine — it’s just the right balance of sweet and savory happily passing through my pearly gates.

We dive into a discussion of the critical world at large. While we worship film and literary criticism for its objectivity and insight, we both have a true distaste for the way food and music analysis focuses so much on negativity. We can’t help but shake our mental fists at the world’s disc-less Disc Jockeys and self-professed kings and queens of cuisine.

We’re here, in some minuscule way, to change that. Because we aren’t going to cross-examine and judge. We’re here to enjoy ourselves. And we cheers to this newfound manifesto.

When it comes to matters of music and food, love seems simple to me. Because love, at its best, isn’t fancy or pretentious.

Due to the mildly biting elements outside, I’m swayed toward sweetness. So I start with Story Farm’s Strawberry Salad. The bitterness of the arugula pairs flawlessly with the walnuts, goat cheese and perfectly-ripened strawberries. The strawberry flavor is seriously explosive. If I were to speak with my mouth open, their effusive fruit blood would run wildly down my chin. But this is a nice place, so I keep my mouth shut for the moment.

Next is the main dish. Chris has the Pan Roasted Chicken Breast with Sour Cherry Jus. He’s too entranced to even offer me a bite. But I respect his absorption and match it with my own when my BBQ Brisket arrives.

Over hundreds of tours around the country, I’ve sampled much of the BBQ the lower forty-eight has to offer. So I feel I can speak fairly confidently when I say that this brisket is the best I’ve ever tasted. Its pairing alongside the sharp micro turnips were akin to a love I’d never felt before. It was like my first.

After regaining our composure from the main courses, we delve into the Chocolate Marshmallow Cupcakes with ice cream and drink espressos. Desserts rarely blow my mind, but I can’t help but fall for the density of the chocolate mixed with the soft flavor and texture of the ice cream and marshmallow. But after the mind-blowing brisket, there’s no brain matter left for any serious thought. Just dulcet, appreciative grunts. That’s how mind-blowing gratification works. Or so I’ve heard.

After the meal, we speak at length with our server Matthew. Despite a quiet demeanor, he has plenty to say about my misunderstandings of Canada and my appropriately-placed love of Kingston. It’s just another way in which Duo secretly rules — their staff is among the best anywhere. No unnecessary city attitude or urgency, just appreciation for the food and the customer.

When it comes to matters of music and food, love seems simple to me. Because love, at its best, isn’t fancy or pretentious. And as long as we’re open to the gratification we seek, the possibilities are endless.

Even if it’s a grilled cheese at a post-apocalyptic truck stop in the middle of Wyoming.

Even if it’s nachos paired with a Budweiser in your brother-in-law’s un-photographable wasteland of a backyard.

I want it all to reign supreme. That’s what it’s all about. Even if it’s just for a few fleeting moments in a dimly lit Kingston restaurant on a rainy Monday night man-date. Love is what we make it. And we should all most definitely go for it.