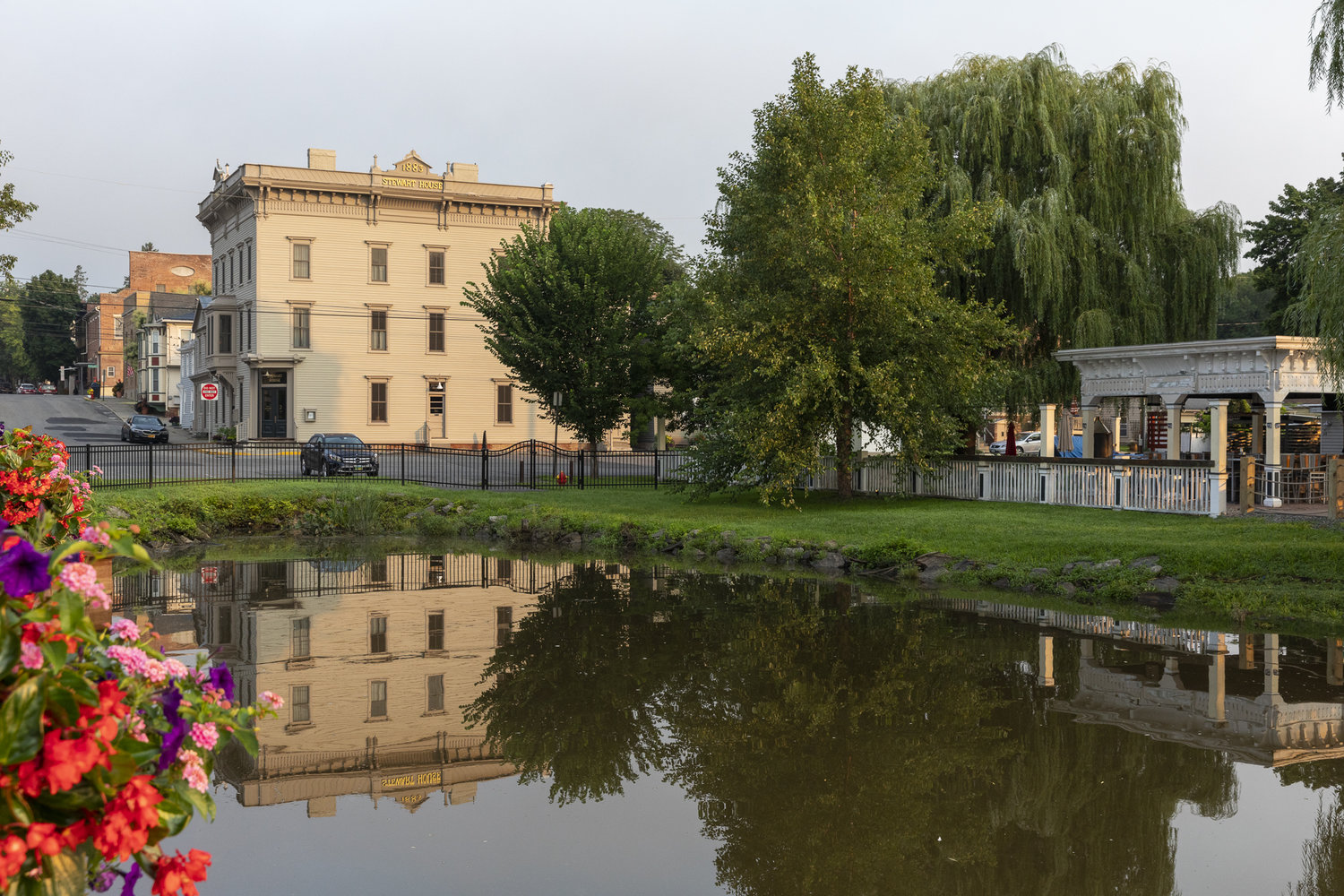 Arrive by boat, train, Trailways, or car to Athen’s newest boutique hotel. With nine spacious and gloriously appointed guest rooms, a farm-to-table tavern, and a waterfront grill, The Stewart House is looking like it’s going to be the hottest new hotel in Greene County in any season.

Perched on the western banks of the river—just across from the much-buzzier enclave of Hudson—the sleepy waterfront village of Athens was once itself a bustling hub of industry. Incorporated in 1805, with history dating back to Colonial times, this town once boasted its own brickyard and ice industry. But toward the end of the 20th century, the town was in a slump, with many of its historic buildings falling into disrepair.

The late aughts brought a new era of tourism and rural migration to Greene County. In 2009, Ken Landin and Janine Bennett purchased the Brooks Opera House in Athens, and a year later, the heavily renovated facility was up and running as Crossroads Brewery—an award-winning, seven-barrel brew house and taproom. 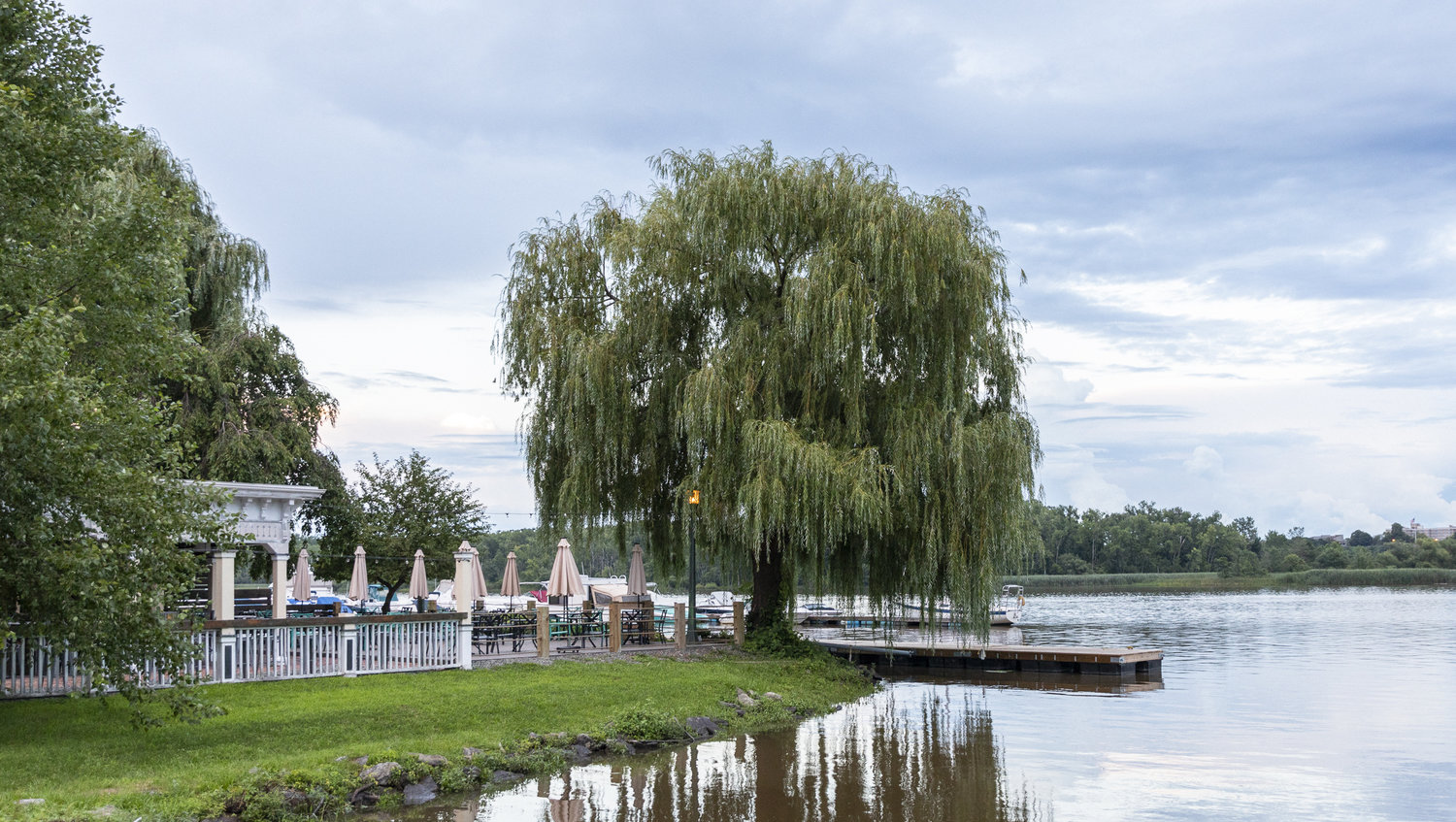 Just down the block, at the bottom of 2nd Street and just a few feet from the Hudson River, a majestic, three-story Italianate building dominates the block. Framed by swaying willow trees and moving water, the Stewart House has long been a cornerstone of the local community. Since first opening its doors in 1883, the inn has offered a comfortable resting place to travellers for over 100 years with its tavern serving as a hub for meetings, fêtes, and romantic dinners throughout the decades.

The Stewart House’s new owners Lon and Lois Ballinger weren’t looking to enter the hospitality business when their realtor convinced them to tour a “sweet hotel” in 2017. (In fact, they had just sold the iconic East Village venue Webster Hall earlier that year and were looking to retire upstate). “I didn’t even want to come,” Lois recalls. “But I walked in the door, and it was love at first site. I looked thought, ‘I can fix this. It had so much potential you could see it just lying there.” 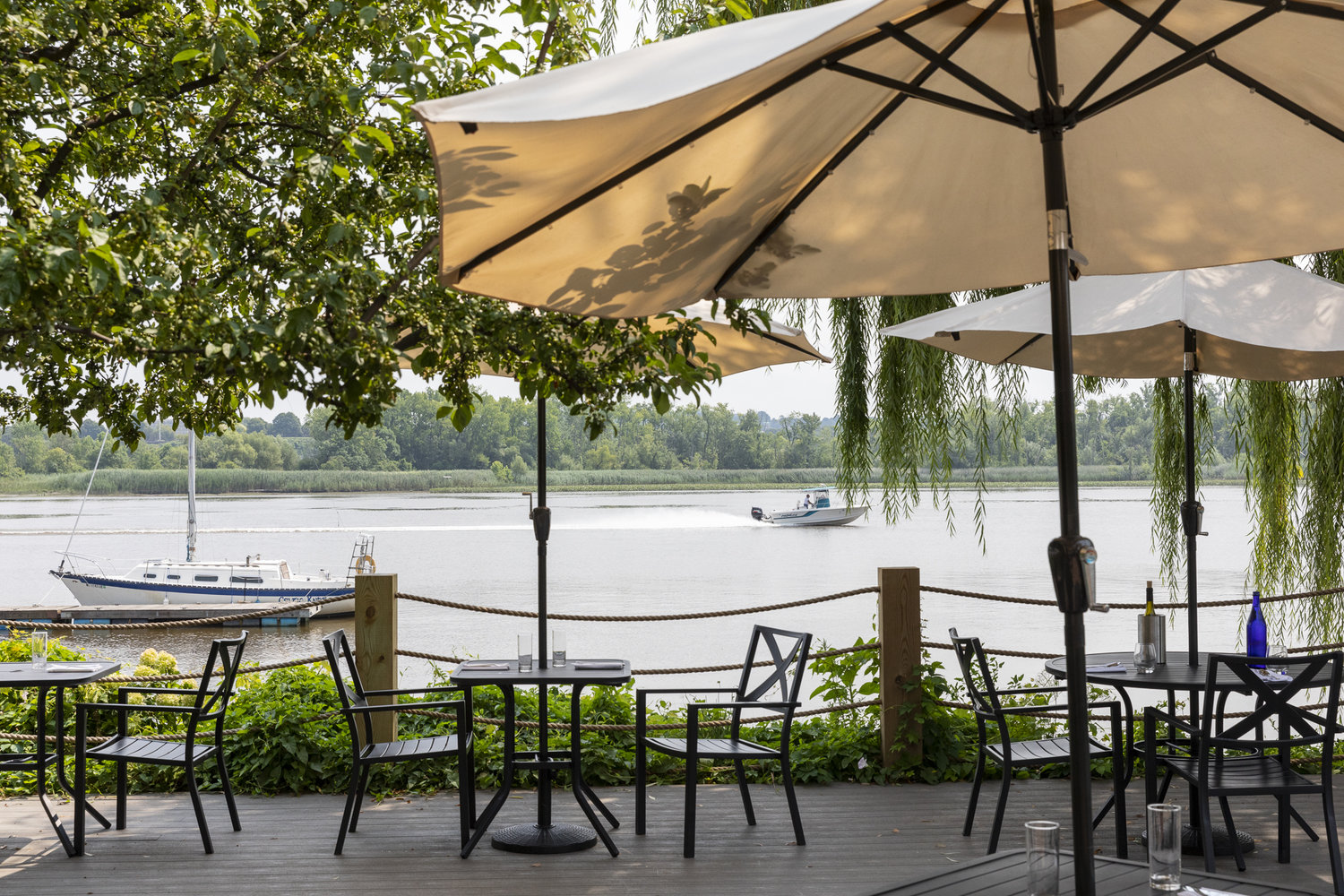 The building had fallen into disrepair, but the bones were great, the river views were unparalleled, and all the bathrooms had been refinished by the previous owners. “I couldn’t wait to get my hands on it,” Lois says. In the end, renovation was much more involved than the Ballingers expected (isn’t it always?), requiring a complete overhaul of the heating and air conditioning system, a new roof, and new windows. A classic can of worms.

But now, The Stewie, as it’s affectionately called, is “moving along tickety boo,” according to Lois. The Ballingers accepted their first bookings over Memorial Day 2018. They also debuted the River Grill, an outdoor bar and wood-fired BBQ in a magical patio surrounded by a graceful curtain of weeping willows. 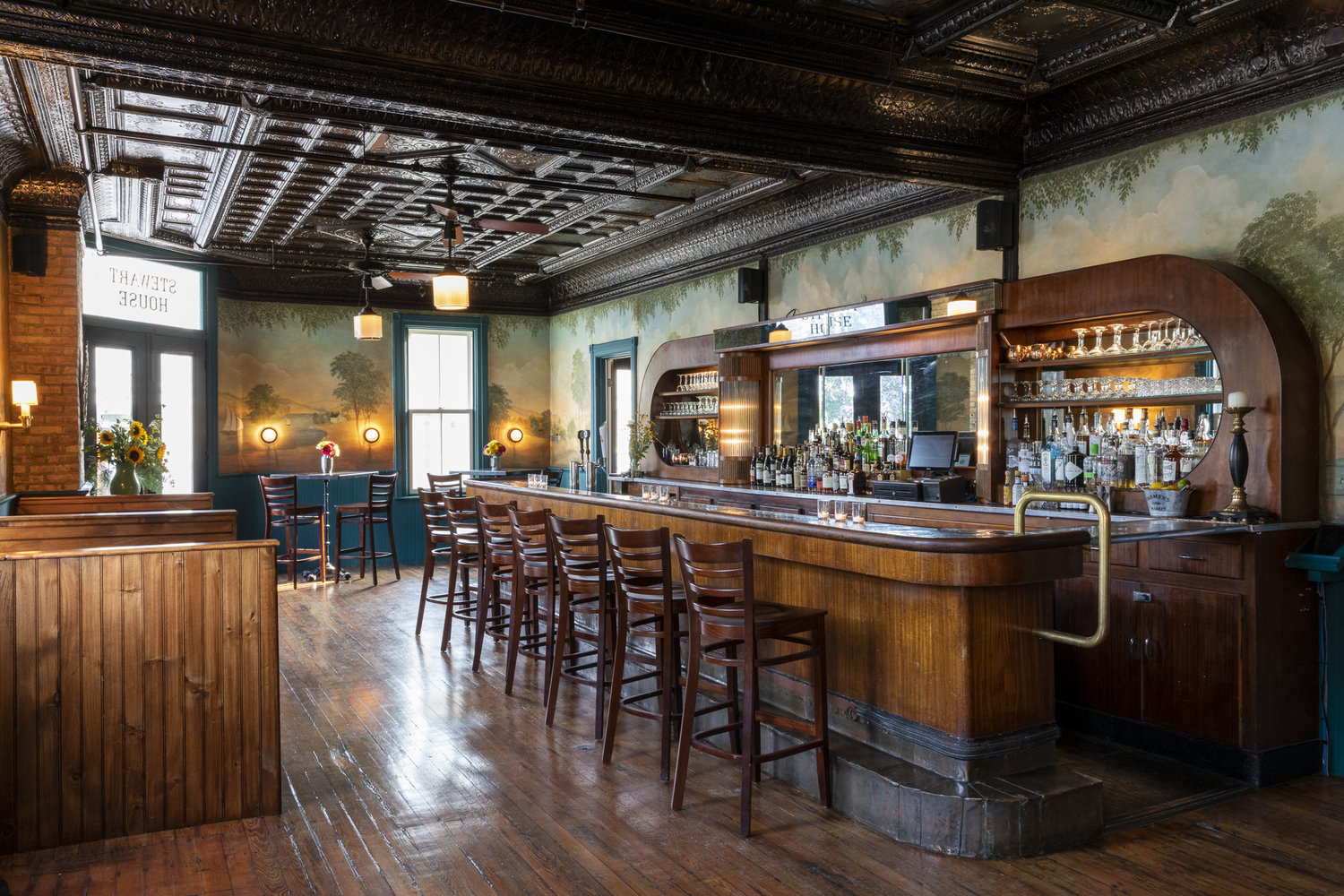 On October 1, ca. 1883, the tavern, opened with CIA grad Bob Turner at the helm of a locally sourced menu. With warm, amber lighting; an Art Deco bar; leather booths; and tin ceilings, the bar and dining room give you the sense of stepping back in time. The walls are painted with a panoramic mural that was there in part when the Ballinger’s bought the building. Lois hunted down the original artist, Nora Johnson, and commissioned her to retouch all the murals.

Open Thursdays through Sundays, ca. 1883 has a cocktail hour from 3-5pm with $2 oysters and a bar menu. Dinner service starts at five, and the mains range from a one-flip double cheeseburger made with grilled onion, aged cheddar, and special sauce on a brioche ($16) to a whole roasted Catskill trout with roasted hakurei turnips, charred brassica mayo, and baby watercress ($32). To start, try Chef Bob’s house-made country pate, served with cornichons, grain mustard, and buckwheat walnut toast ($13). With global wines, local beers, and a full range of craft cocktails and after-dinner drinks, there is something to sip on for everyone. 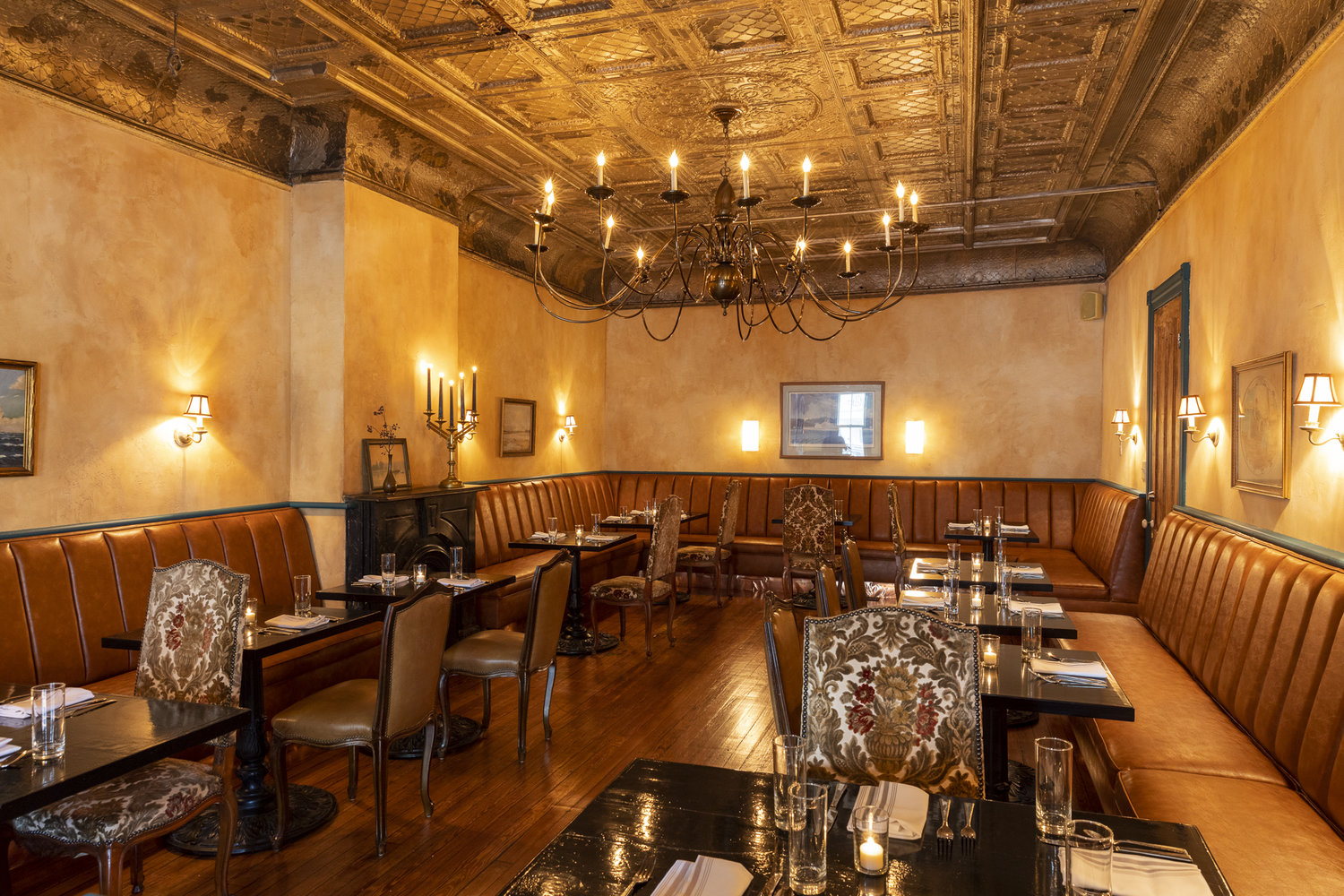 “People are very excited about the Stewart House being restored and brought back to its original grandeur,” Lois says. Since opening, the tavern has been frequented by a steady mix of lodgers, locals and weekenders staying nearby. “It is my dream that they all stay part of our customer base, that this is a place for people from all walks of life to mingle, not just tourists. The locals are wonderful characters and good hard-working people that really add a lot of flavor to the Stewart House.”

The Stewart House’s nine luxurious and lofty guest rooms are the ultimate refuge for someone looking to escape the hectic pace of the city. Cozy up at the end of a day of upstate adventuring or stay in bed all day and dine downstairs without ever leaving homebase. “The rooms have tremendous light that comes in thanks to the extremely large windows, so it feels very spacious,” Lois says. “And all the rooms except two have a view of the river. That is very rare in this area—we’re not on a cliff, you can actually walk directly to the river and touch the water.” 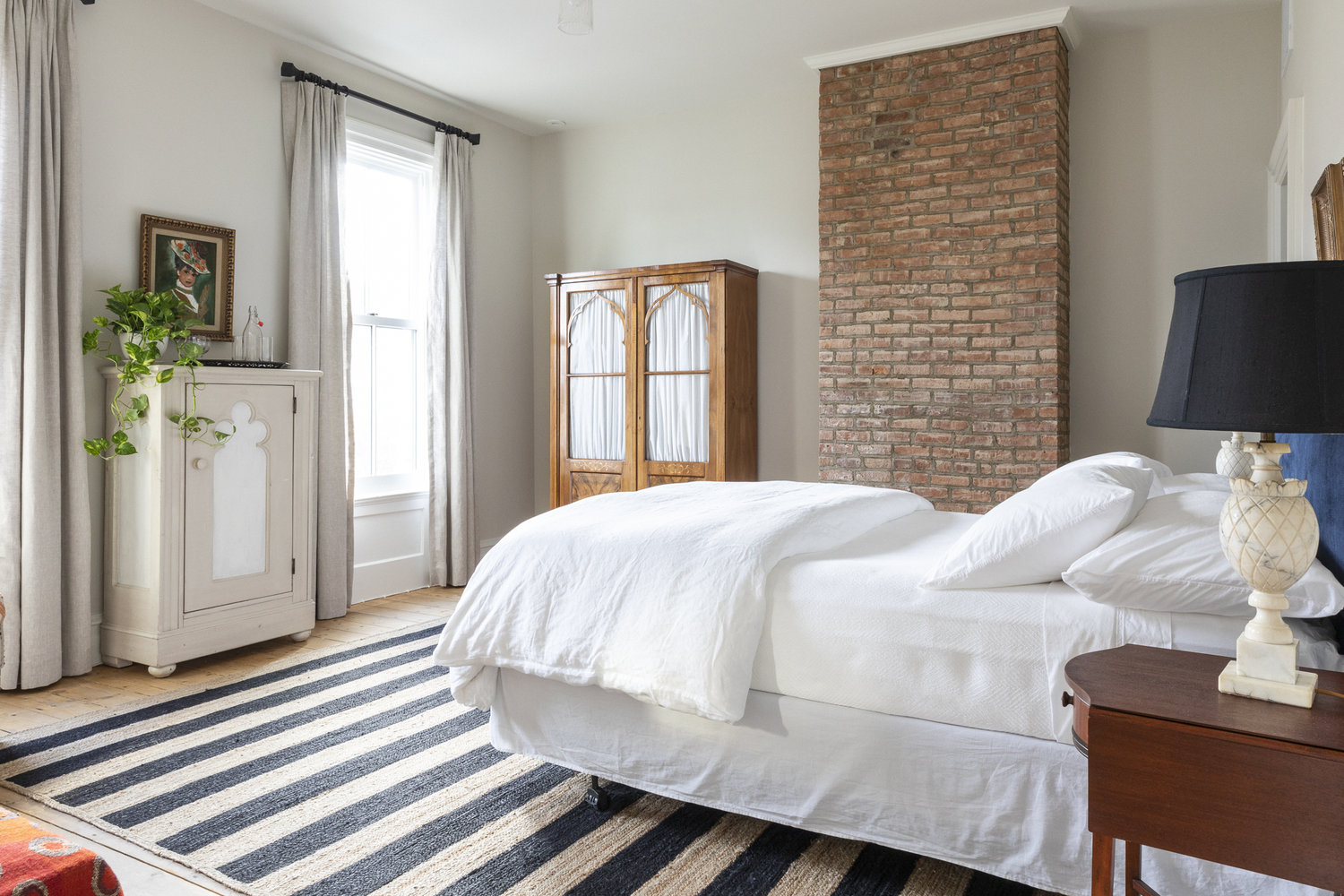 At capacity, the Stewart House can accommodate 22 guests. Each of the nine rooms features high-end bedding, plush robes and slippers, locally made toiletries, and stunning, tiled ensuite bathrooms (2 of the suites even have soaking tubs). The furniture is a handpicked mismatch of vintage armchairs and armoires with custom velvet headboards. All rooms include continental breakfast of fresh fruit, yogurt, house-made granola and bread, coffee, and tea. The rooms range from $249-$349 a night, with mid-week and off-season discounts.

A half-hour drive from both Windham and Hunter ski resorts and just 15 minutes from Hudson, the Stewart House is a great basecamp for exploring. Arrive by train and Uber across the bridge. In July and August, take the ferry on Friday and Saturday nights from the Hudson waterfront and dock right at the Stewart House doorstep. 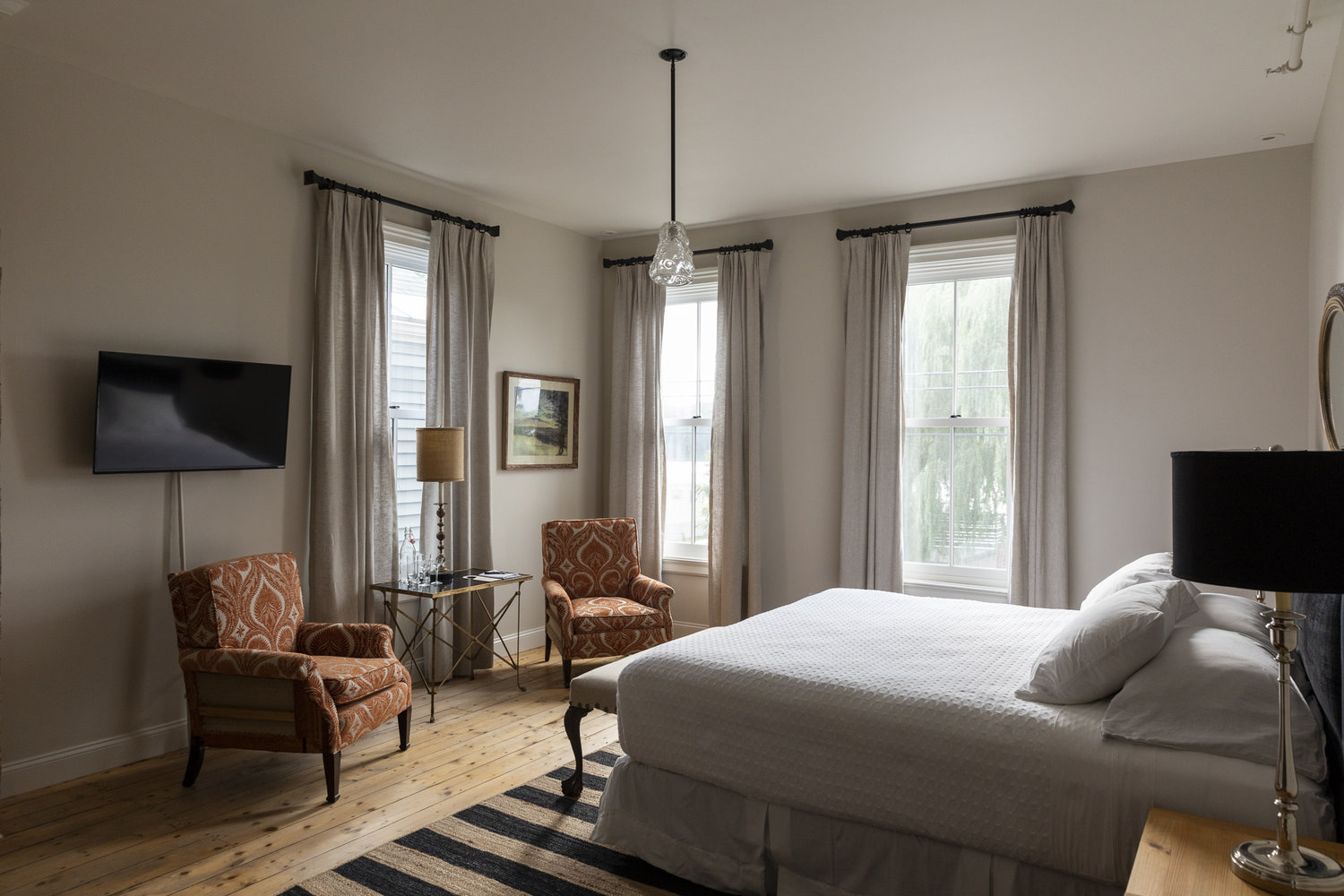 The possibilities continue to unfold for this riverside hotel. With his past at Webster Hall, Lon Ballinger can’t help but toy with the idea of planning programming. “The Village of Athens riverfront park is just adjacent to us here and would really make a great little concert, festival location,” says Lois noncommittally. “There is a lot of potential here. So who knows what is ahead in 2019?”