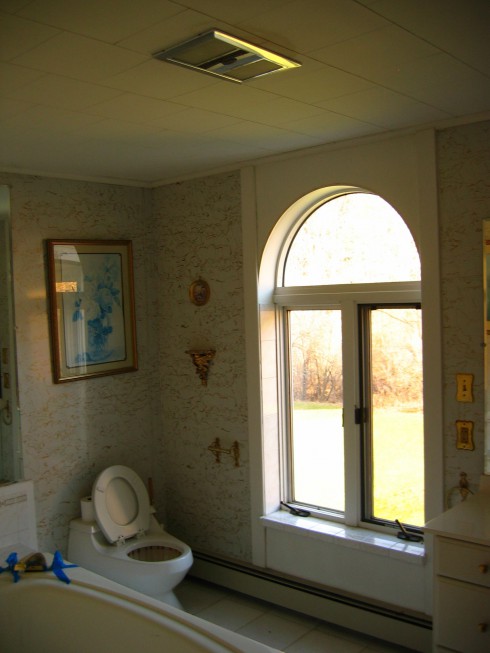 The old, ugly bathroom before the renovation

I wrote several months ago about our struggle with finding a contractor to do some renovation projects we wanted to get done.  We had a whole list of things that we wanted to get done on the house – things that we didn’t have the time or the skills to do ourselves.  The list included expanding the kitchen, replacing the cement porch around the house with a wood porch,  re-doing two of the bathrooms upstairs, fixing up some of the bedrooms upstairs, and in general, bringing parts of the house aesthetically to match our taste.

We hadn’t had any luck getting any of the contractors we had talked to or met to actually come back to us with quotes for the work we wanted to do.  We would have people come out, spend more than an hour talking about what we wanted to do, then we would never hear from them again.  We began to think it was something about us – it was kind of like the worst part of dating (was it our breath or our hairdos?) .  We’ve heard from other people that they’ve had the same thing happened to them as well.

We found Clifton Rabuffo on the Home Advisor (Service Magic)  web site.  He came out to the house and spent over an hour with us while we told him all of the different things we wanted to get done.  We wanted to let him know that we had significant work for him to do, even if we weren’t going to do it all at once.  He was a lot younger than any of the other contractors we had met with, and at first we were a little unsure if he was experienced enough to do the work.  He suggested that we go look at a project he was just finishing.   We drove over to see the house he was just finishing up near Phonecia – work that included building a deck, a garage and adding an addition which included a bathroom.  Seeing this made us realize that he was a professional that knew what he was doing.  We were really excited to have found him.

We asked him for a quote to re-do the two bathrooms upstairs since neither of them were fully functional.  In one, the toilet kind of worked, and we used the sinks, and the disco Jacuzzi tub (pictured below) had been turned off because it leaked (and besides that, it was gross).  In the other bathroom, we’d removed the toilet because it leaked, never used the shower because it leaked, and the whole room was brown, plastic and ugly. Cliff got back to us with a quote to do the work and he got started by sending us 3D renderings of the bathroom layout based on what we had discussed. 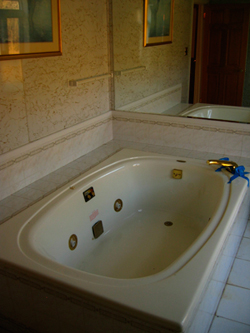 As of now, one bathroom is completely done, and the other is almost there (we’re waiting on a vanity top which has been my delay in not ordering it on time).  We’re really happy with the work he’s done (so much so that we’re having him re-do the bedrooms and small kitchen upstairs) and we can wholeheartedly recommend him. 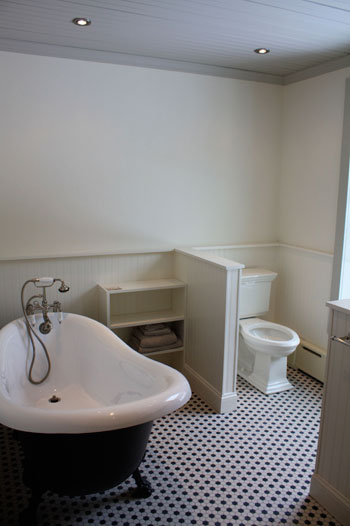 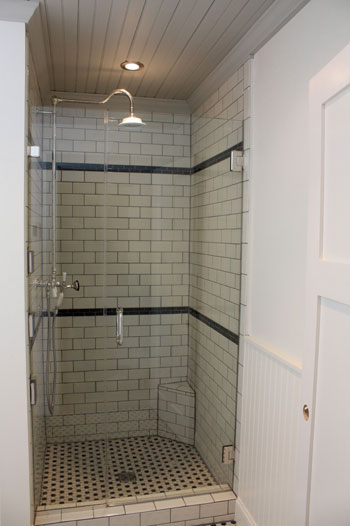 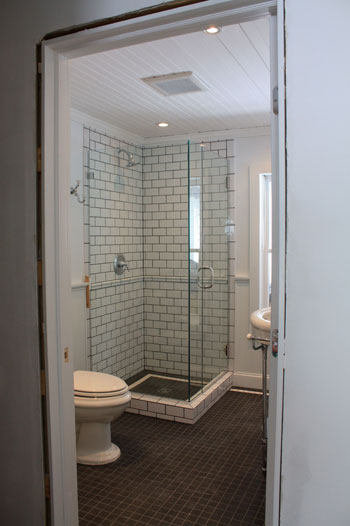 During the process, I realized that there were a few key things about Cliff and the way he worked with us that made all of the difference.  I would highly recommend that you look for the following qualities in any contractor you use:

Good communication:  When we call Cliff, he calls us back.  He calls one of us to check in and get detailed answers to any question he has, sometimes on a daily basis.  He uses email (seriously, this is a big one – many contractors we talked to or used before don’t use or don’t believe in email.)  He drew us 3D pictures of what he was thinking about so we could talk details and work through any issues.  If you can’t get your contractor to call you back (as happened to us with someone previously) how can you know what’s going on? He’d done this type of project before, so he was also really good at letting us know what WE needed to do and have done and what this deadlines were in order to keep the project moving forward.

Professionalism:  Part of this is obviously have the skills necessary to do the work you want done and to do it well, but there’s also a level of professionalism that’s about the service that is being provided. At the most basic level, it’s about showing up when you say you’re going to.    At a more detailed level this includes knowing the building codes and being able to deal with the building inspector so that we didn’t have to.  Also being trustworthy – he’s at our house these days more than we are and we know that we can trust him.    Also having a good network of sub-contractors for specialized work.

A great indicator of being a professional though is when someone takes pride in the work they’ve done.    When we went with Cliff that first day to see the work he’d done in Phonecia, it was clear that he was rightly proud of the work he had done there, and it really resonated with us.

Willingness to form a partnership:  Maybe one of our worst moments in dealing with another contractor was when we dared to complain about the quality of some of the work he had done.  After we expressed our disappointment, he said something to the affect of “well it’s not like your house is falling down, is it?”  If it hadn’t been clear to us before, it was very clear then that he didn’t give a sh*t about us our our house.   For him, we were just some new city people (or cidiots) who bought a house in the country and had money to spend.  He didn’t see that for us, this is where we want to retire and spend significant amounts of time.  And for us, the money is a big deal – we don’t have tons of it and what we do spend we want it to be worth it.  The great thing about Cliff was that he was very willing to work with us and help us figure out how to do what we wanted to do.    We had a vision of what we wanted to have done, and Cliff was instrumental in helping us realize it.

To top it all off, he’s a really nice guy.

All of this said, the same should be true of us – that we should all try to be good clients and follow the same guidelines:  Communicate clearly what you want and what your expectations are, and have reasonable expectations; be willing to make decisions and stick to them; follow-through with the tasks you need to complete to keep the project on track; be respectful of your contractor’s time and that he’s doing this for a living, not just to make you happy;  keep an open mind when unexpected comes up, and be willing to take recommendations when your contractor knows better than you or has an idea that is better than something you thought of. 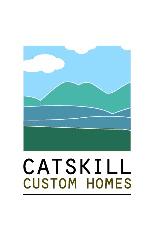