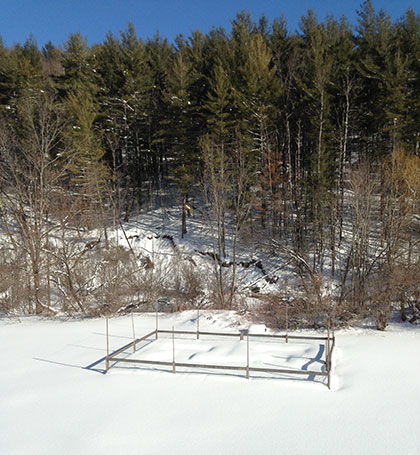 My garden two weeks ago.

It’s March 29th and yes, it snowed today.  And yesterday.  And it will probably snow tomorrow.  But it is officially spring, and I have a planting schedule to keep, so I’m doing what I can do inside to keep moving forward.  But, my thoughts are definitely outside as well.  In the first post by the Bungalow Byliners about the fantastic renovation they did, a commenter asked what drip irrigation system I use for my raised bed garden.  This inspired me to do a post on some of the challenges of doing a vegetable garden as a weekender and what I’m doing now to get ready.

Challenge #1:  We have a short season here

We are at around 1800 feet in elevation, and it’s common knowledge among local gardeners that you can’t put much of anything in the ground before Memorial Day.  Exceptions are some greens, peas and other cold loving plants.   Using row covers and creating hoop houses, tunnels and floating row covers are popular season extenders in the area, but apparently these work better if you are around to take down the covers during the warm daytime and put them back for the cold nights.  Since I’m not around 5 days of the week, I can’t do this, but this year I’m going to try some “Hoop Loops”  from Johnny’s Seeds (one of my favorite online garden stores) to create some row covers.  I figure I can try to start some stuff early, and if it works, I’m that much further ahead.  If it fails, I can try again at the end of May.

Challenge #2:  The Catskills are full of rocks

We live in a valley with a Catskill creek at the border of our property.  When we dug out the lawn two years ago to put in the first garden, we found about four inches of beautiful black dirt above tons and tons of river rock.  I had already decided at that point to do a raised bed because I heard they would help somewhat with extending the growing season, but finding rocks and rocks and rocks under the beautiful soil made me realize we’d made the right decision.  The amount of rocks here became especially evident after Hurricane Irene when what had been little creeks disgorged twenty-foot roadblocks of rocks across roads and in the middle of fields.

I love the raised bed garden – we started the first year with a kit from Gardens to Gro (the “Just Add Lumber” kit).  Last year we expanded the garden by just buying the metal brackets they sell and adding our own lumber.  But, it was lots of time and effort to put it together, and not cheap when you consider you have to buy the lumber to build it (only non-treated lumber) and soil to put in it.   And now that it’s there, it’s permanent until it falls apart.

This year, to expand the garden, I’m going to try something different.  Last week the New York Times had an article about straw bale gardening.   There is, of course, a book..  I was immediately sold due to the fact that it’s easy to do, cheaper than building a raised bed, and we can move it next year if we want.  Maybe it’s a new fad, but it seems to make sense.  I’d LOVE to hear from anyone who has tried this.

Challenge #3: We’re not here to water the garden every day

The first year we had the garden, it was smaller, it was a wet year, and our neighbor who mows our lawn volunteered to water it for us.  Last year, with the bigger garden, I knew I’d need something more robust, so I got a garden irrigation kit from Drip Depot (Of course at first I had to make a few jokes about how it was a website that you ordered dorky boyfriends from).  If you are just starting out, I would highly recommend one of their kits.  It has all of the significant parts that you need to get started, including all of the valves and filters and backflow preventers and things you wouldn’t necessarily think you would need.  You will definitely need more drippers and hoses than you think you will need (especially if we have another dry early summer like we did last year).  I also got a timer to turn the irrigation system on when we weren’t there , but I didn’t like this one very much because it didn’t let me program more than one watering cycle per day (I’d like to do one in the morning and one in the evening).  I’m looking for a new timer if anyone has any recommendations.  They also have good instructional videos about how to put everything together.  I recently saw drip irrigation parts available at Home Depot, but you need to know what you need.  Also, if you have well water, and you don’t have a sediment filter coming from your well pump, you will need to clean the filters in the system frequently.  At least I did.

One of the things that my dad recommended that I never knew even existed was quick release hose couplers.  You put one on the water supply, and one on the hose, and you can quickly connect or disconnect the hose.  No more twisting and turning the hose connector with wet hands.  Maybe these have been around for years and living in the city didn’t expose me to them, but they are a fantastic invention.

I also built a custom water supply valve on the side of our garden using basic brass and PVC plumbing parts available at most hardware stores.  Between this and the quick release hose couplers, the guy who mows our lawn was able quickly disconnect the water supply hose from the garden across the lawn so he could mow it. 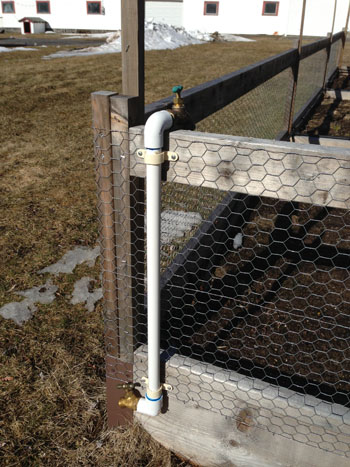 Simple water supply valve I made to hook the hose to the garden.

Truthfully, we haven’t had a big problem with this so far (knock on wood).  There are a lot of deer here (and probably everywhere).  Our first year, we had a bumper apple crop, so the deer, bears and groundhogs were pretty satisfied with those and didn’t bother the garden at all.  When we built the raised beds, we put wire mesh at the bottom, so no animals can tunnel underneath and get to the garden that way.

Last year, without any apples, the deer ate the sunflowers I had growing in the front of the house, and the local ground hog (we affectionately have named him Gordon) chewed through the plastic mesh I had around the garden fence and ate all of my basil and lettuce, some of the cucumbers and nibbled at the squash.  We added chicken wire to the fence, so despite his attempts, he wasn’t able to get in again.  For the deer, we used one of the smelly deer repellant sprays.   It smelled really bad, but it definitely worked.  This year we might try something like this that supposedly isn’t as smelly.  We never had rabbits before, but we’ve noticed a lot of them around this winter, so we aren’t sure what challenges they will bring this summer.

One other problem I had with the wooden raised beds is earwigs.  Earwigs are (to me) one of the most disturbing insects ever.  And they love wet wood, so a raised bed garden made of wood is like paradise to them.   I read up on them and found that you can use Diatomaceous earth—a natural insecticide that dehydrates insect’s exoskeletons.  It works to get rid of bugs like beetles, earwigs – even cockroaches and fleas.  This year I plan to douse the garden in it before the earwigs and flea beetles really get going.

I’ve currently got the heat turned up in one of the rooms upstairs so my seedlings have a warm place to get started.   This year I ordered all of my seeds from Baker Creek who have lots of interesting heirloom varieties.  Here’s to hoping spring comes soon!

P.S. – I know I promised last time I would do a whole string of interviews with other people.  I will do them, I promise!  I had a cancellation due to Passover this week, so next post will be an interview.