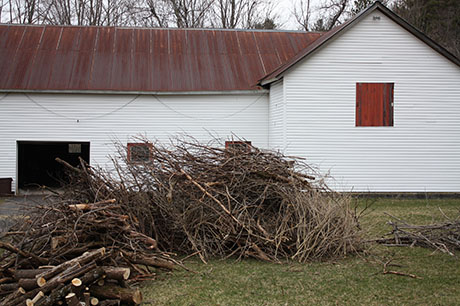 We all know it’s been a cold, slow spring, but finally, even where we are, the trees are starting to bud and the grass is getting green.  This means its time for outside spring cleaning.  Since we only did minor clean up last spring (the spring before we had just moved in and had no idea what plants and shrubs we had to deal with) we have a lot to do this year.

One of the great things about buying an old house – where apparently the previous owners were gardeners – is that we have a good selection of mature plants and shrubs around the house, including a lot of lilac trees (trees, not bushes) a huge rhododendron, a huge hydrangea bush, crab-apple and regular apple trees, a quince bush, bunches of forsythia, and a few other miscellaneous trees and shrubs that I haven’t been able to identify yet.

One of the bad things about this is that our house hadn’t been inhabited in a few years, and the yard hadn’t been tended besides mowing the lawn.  This meant serious shrubbery overgrowth that needed tending.  I’ve never lived in a place where I was responsible for tending the yard, so I really had no idea how to prune and clean up most of the trees and shrubs in the yard.  Web searches turned up lots of advice including forums and videos on Youtube, but until you’ve done it yourself and seen results (good or bad) it can be a little daunting to start.

One of the best sites I found for pruning advice is Plant Amnesty “whose mission is to end the senseless torture and mutilation of trees and shrubs.”

It’s based out of the west coast, but it’s informative and cleverly written (kind of like Gawker for gardening) and has great advice about pruning.  We had a very overgrown forsythia bush  – rather a forsythia forest, that we needed to clean up, so I followed their advice, namely to “prune with vigor.”

Most pruning advice recommends that you prune any flowering shrubs after they flower.  I think much of this is so that you get to enjoy the flowering shrubs before you cut things off, but also because many shrubs flower on the new growth from the last year which you want to try to avoid cutting off when you prune.   The problem with this is that if you prune after they flower, the branches also most likely have leaves on them as well, which presents problems in being able to easily see what you need to prune off.  It also means that you have a lot more leaves and yard waste you have to figure out how to get rid of.    I’ve decided that in order to get our shrubs in good order this year and so I have to prune less next year, we’re going to do more now in the early spring rather than later.  Less leaves, less bugs flying around, and less ticks to worry about when you are crawling around on the ground under bushes.

We’re having a big party at the house this summer (AKA, our wedding) so we’re also trying to clean up some areas at the top of the creek bank as well as near an old retaining wall near the creek so we have more spaces for people to hang out and congregate.  This means we’re generating tons of yard waste – old blackberry brambles, tons of Virginia creeper vines (does anybody else have a problem with Virginia creeper?  We have a TON of it!) older fallen down trees, limbs left from trees we cut down last year that we didn’t’ get to burn and then all of the remaining branches and parts from the pruning we’ve been doing this year.   Some of this we will need to burn (the canes and the creeper so they don’t reproduce) but some of this we’d like to turn into mulch.  The jury is still out on whether it’s worth renting a mulcher/chipper to process the amount of stuff we need to get rid of.  We’ve been told these machines are problematic – they break down, the blades need to be sharpened frequently, and that they are slow, noisy, expensive  (we have a quote for $120 to rent for the weekend), use a lot of gas, smelly and generally not worth the effort.

Our other option is to just burn it all – have a huge bonfire, invite the neighbors over and roast some weenies and marshmallows.  This is definitely the more romantic idea, and last year we got a burn permit for open burning  (we live in a ‘fire town’ check to make sure you don’t need a permit where you live).  Unfortunately, open burning is not allowed between March 16 and May 14  which means we have to live with this pile on our lawn for another three weeks.

One thing I would recommend when you are looking at a house to buy: really think about how much time you are willing and able to put into yard care.  Is it something you enjoy doing, or will it just be a chore for you that you will have to either suck up and do yourself or pay someone else to do?  If you don’t like or don’t want to pay for it, look for a place that has more native and natural landscaping rather than bushes and shrubs that have been planted and will need care and pruning.

We’re getting close to being done this year, and in general I like doing this type of work.  If you do it correctly, it’s really satisfying to see what a difference it makes.  Next year I need to tackle the quince bush that desperately needs to be thinned.  Given the giant thorns it has, and the beautiful blooms it has in the spring, it’s one that I’m not looking forward to “pruning with vigor.”