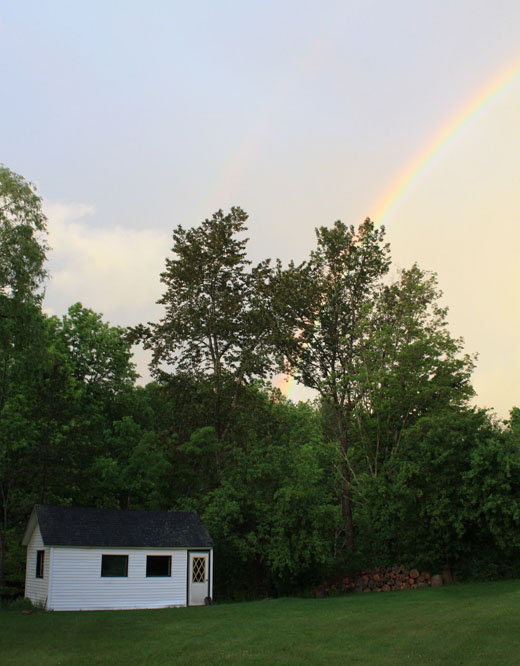 As with most everything in life, there are always pros and cons to any big (or little) life decision you make. This week, I’ll share the positive side I’ve found to being a dedicated country weekender:

Getting out of the city EVERY Friday night:  As of right now — one year and four months into our Weekender experience — I really look forward to getting out of the city and up to the house every Friday night. My boyfriend (hereinafter referred to as Mr. Sticks) and I have 23 and 16 years in NYC, respectively, and we’ve both seen NYC, in general, and Brooklyn in particular, change both for the better and for the worse.  There are a lot of fantastic things going on in Brooklyn these days — great food, culture, neighborhoods and areas that you didn’t used to be able to go to that are now open for exploration. But at the same time, it’s gotten a little too overwhelming — so much to do and experience — that it sort of makes you feel like you are out of touch and aren’t taking advantage of everything the city has to offer if you aren’t out doing stuff every evening and weekend. Also the sheer number of people there are these days, both in Brooklyn where we live and in Midtown where we work. Who are all of those people and what are they all doing in the city?

We really love our house and the area it’s in:  It’s definitely a quirky house: a 100+ year old place with a big old barn set alongside a beautiful creek. It was in the same family for 70 years, has had some seriously strange 70’s style renovations done, and had been minimally neglected for the past 10 years or so.  But it has great character, lots of potential and a really nice feel to it.  We’re always discovering new things (photos below). I’d be there right now if I could.

The box of toys we found in the attic of the garden shed and the Prattsville Dairly milk bottle I found while pruning the lilac bushes behind the house.

Friends:  We still hang out with our friends that we used to visit close by (though unfortunately not as much) but we’ve also made a lot of new friends as well.  We met several of them by going to local happenings — a square dance (where the band Hilt Kelly and his Sidekicks  played and called) and the local town pancake breakfast. We also met a lot of people right after Hurricane Irene. We were all stuck there for a few days when a collapsed bridge and a landslide barred us from leaving.  So without power and with food defrosting and spoiling in freezers and fridges, several people had pot-luck parties to get rid food before it all went bad, shared gas for generators and checked in on each other to make sure everyone was doing OK.

Projects:  At work, I sit in front of a computer all day and move pixels around.  Many of the things I’ve worked on and created in my career literally do not exist anymore. They’ve disappeared into the ether of of the Internet.   It’s really nice to have some real, concrete projects to work on – building things, growing things, tending things.  We both get a real sense of accomplishment. It’s also actually really nice to do simple meditative physical work like weeding, painting, mowing or cleaning where you just DO things without having to think about them too much. Mr. Sticks really likes sweeping. It can also be very therapeutic to rip things apart — something we did a lot of in the first few months we had the house.

Future:  I’ve never been a big long-term planner. I generally would plan for maybe six months to a year forward. I liked to give fate and chance a chance. Now, I feel like I’m thinking more long-term. We have (at the moment) a four-phase renovation plan for the house: Phase one fix up the upstairs apartment; Phase two, get rid of the horrible whirlpool tub in the upstairs bathroom and turn it into a farmhouse bathroom again; Phase three, expand the kitchen; Phase four, turn the front porch from broken bluestone and concrete to a level, wooden porch and use the bluestone we remove to build a patio overlooking the creek. There will be plenty of smaller projects in between.  It’s really nice to have a future plan and to think about all of the things we want to do to make the house a better place.  Now all we need to do is find a good, reliable contractor.  If you know any, please share!

Next Week:  The negatives.