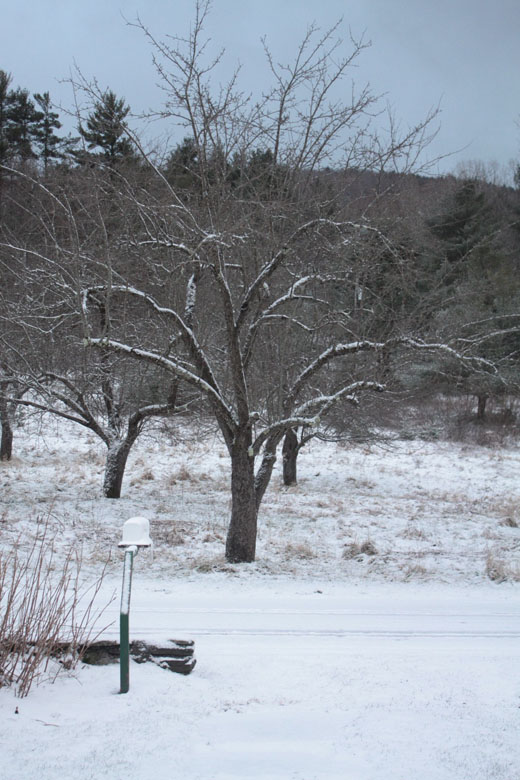 One thing I realized from my last post about contractors: a lot of what I’ve been writing comes out sounding kind of ‘advice-y.’  While I hope that some stuff here has been good advice, I don’t always mean it to be taken as what is best for your particular situation, but rather a description of some of the things that we’ve had issues with, and in some cases solved.  Hopefully it’s helpful either way.

That said, one of the things we talked about doing late last winter and through the summer was to better winterize the house and make it more efficient so we don’t pay as much for heating oil each winter.  We didn’t know the full extent of what exactly we could do.   The house has relatively new/good windows, and we know that in many places there is good insulation between the floors.  But since it’s an older house, and in some rooms we still have the original plaster and lathe walls, we wondered if there was anything else we could do to increase efficiency.

We initially tried to do this late last winter, and were hoping to qualify for a low interest loan to help pay for any energy improvements we wanted to make (namely a new, efficient boiler) but were told that all allocated funding had been used, and they suggested we try again at the beginning of the year.  It turns out that  some of the NYSERDA programs have limited budgets that get used up before the year end, and in some cases lose funding depending on what’s going on in Albany (or Washington).

So in March of this year, we contacted Energy Experts in Fleischmanns since from looking at their website and speaking with them, they seemed professional and like they knew the process and would be able to help us out.  They came out to the house on a cold day.  We walked them through the entire house – spending a lot of time in both the attic and the basement – both of which are unfinished.  He gave us some advice on what we could insulate in the basement, that we should probably replace our old, inefficient boiler and separate hot water heater.  He did a vacuum test, where he put a fan set in the front door and started sucking the air out of the house.  This was the most surprising thing since we always felt that the house was pretty tight and not drafty.  When he turned on the fan, you could feel the air rushing out around all of the baseboards and many of the wooden window frames.

While the audit was an interesting process, unfortunately, we didn’t come out of it with a lot of decisions made about what we needed to do, with the exception of replacing the boiler (which we just did this week $$$$).  The most confusing thing for us at this point is what is the best approach to seal and contain the areas of the house we want to keep warm.  The guy who did the audit suggested that we use the ‘whole house envelope’ approach.  This means treating both the attic and the basement as areas that we want to ‘condition’ or  keep warm(ish), so the main part of the house stays warmer.  This would require putting spray-foam insulation on the attic ceiling, around the interior attic soffits, all of the old stonewalls in the basement, as well as any reachable crawlspace areas.  Not cheap, to be sure, but also contrary to a lot of what we’ve read and heard about insulating houses.

Since then we’ve had contractors and other experienced people (my dad) suggest a contrary approach – insulating more in the FLOOR (and interior soffits) of the attic so the attic is cold in the winter and hot in the summer, and where possible, insulating the ceiling of the basement.  The only ‘conditioned’ space in this approach is the livable parts of the house.

And here it is, the middle of October, and besides the new boiler, we have done zero other winterizing.  The plan (after we finish the painting – hopefully this weekend) is to at least go around and caulk some of the gaps around floorboards and windows, insulate the hot water heat pipes (we did some last year with the foam tube insulation which our heating guy just told us is the wrong kind of insulation for heat pipes because it melts and gives of gases), and do some more research and come up with a plan for next year on how to deal with the attic and the basement.

Has anyone had any experience making an older house more efficient?  What was your approach?  Anyone else had an energy audit that they felt was useful and helpful?