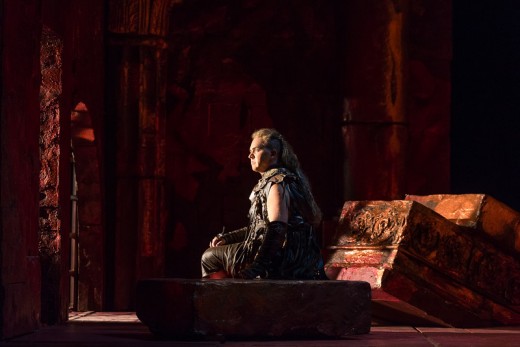 From the Glimmerglass Festival’s 2015 production of Vivaldi’s “Cato in Utica.” Courtesy of Glimmerglass.org

Glimmerglass Opera Festival’s Anniversary Concert
Glimmerglass Opera Festival is hosting its 40th Anniversary Concert this Sunday, August 16 at 5 pm at the Alice Busch Opera Theater in Cooperstown. The festival, which launched in 1975, has distinguished itself over the years with numerous productions of Baroque music, including several works by Handel. This summer’s productions are: The Magic Flute written by Mozart in 1791; Macbeth written by Verdi in 1847 based on Shakespeare’s play of the same name; Cato in Utica written by Vivaldi in 1737; and, Candide written by Leonard Bernstein in 1956 based on Voltaire’s novella of the same name. To see Glimmerglass Festival’s Birthday Book, visit happy40thglimmerglass.org. For tickets and more information, visit glimmerglass.org.

Writers in the Mountains
Writers in the Mountains is hosting its annual summer reading event “Writers Exposed Sunday,” August 16 at 1 pm at the Erpf Center in Arkville. An eclectic mix of writers, including poets Anique Taylor and Sharon Israel, and nonfiction author Leslie T. Sharpe will be sharing passages from their recent works. Journalist Lillian Browne, who has just been named editor-in-chief at The Reporter, Delaware County’s official newspaper, will be honored at this event: Browne is the third woman in the paper’s 134 years history to hold this position. Songwriter and cookbook editor Carrie Bradley Neves will perform some of her original songs. For more information, visit writersinthemountains.org.

The Saugerties Artists Studio Tour
The Saugerties Artists Studio Tour, launched in 2002, takes place this weekend Friday through Sunday, August 14 to 16. The opening reception takes place Friday, August 14 at 5 pm at the Opus 40 gallery. Over the span of three days forty artists working in all media will be opening their studios and sharing their working space. Participants include painter Isaac Abrams, painter and printmaker Viorica Stan, and mixed media artist Mikhail Horowitz. For more information, visit saugertiesarttour.com. 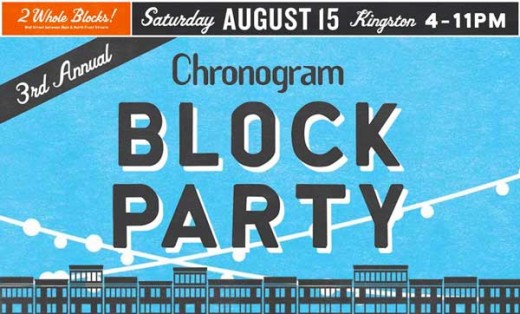 Chronogram Block Party
Chronogram magazine is hosting its third annual Block Party this Saturday, August 15 at 4 pm across the entire stockade district in Kingston. There will be live performances by Simi Stone, Upstate Rubdown, Caroline Rose, and Connor Kennedy & Minstrel. Shadowland Theatre will perform Woodie Guthrie’s American Song. An Etsy Pop-Up market will take place from 5 to 9 pm. Street performers and a do-it-yourself art tent are also part of the fun. For more information, visit chronogramblockparty.com. 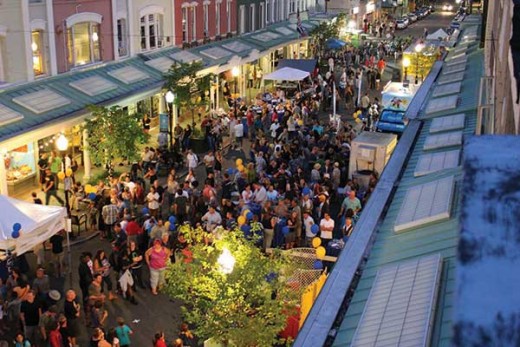