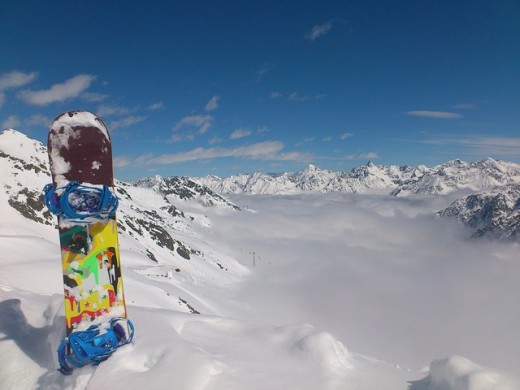 During the final days of winter I took my two sons, 8 and 10, for one last day of downhill skiing. Snow fell, at times lightly, creating a scene like a Japanese brush painting with flakes floating past birds roosting on a branch with cherry blossoms. At other times it fell so thickly that skiing through it felt like being in the cockpit of the Millennium Falcon launching into hyperdrive through a mass of stars.

Midway through the day, the younger boy announced that he was finished skiing and was ready to snowboard. Though he had tried it only once before he was eager to practice the new skill. “You’re going to snowboard with me,” he commanded. “Right, dad?”

My initial response was, no way. I remembered the last time I tried snowboarding, some 20 years ago, at the behest of an acquaintance who extolled the awesomeness of this alternate mode of descending a snow-covered hill with both feet strapped to a single bit of fiberglass and wood. The slopes that day were almost a solid sheet of ice, making my frequent falls on the hard surface punishing. By the end of the day I was convinced I had a concussion, and repeated topples in the same position left my right buttock with the excruciating sensation of having been tenderized with a butcher’s hammer.

With this memory in mind, my response to the boy was unenthusiastic. “No…” I said, “I already know how to ski and I don’t feel like learning something new.”

Together, my sons looked at my quizzically, taking in what I had said. The words resounded in a moment of silence, and I knew I had to redress the error. “Nothing can really be taken back,” I said. “Nevertheless, I’m changing my mind. I will snowboard, precisely because I don’t know how.”

Again quizzical looks. The younger boy was not interested in my philosophy, but he was happy I would join him. On the slope, I fell a lot. Fortunately, the fresh snow made landings soft, and by the end of the day I had made a complete run without crashing.

More to the point, I tasted again the refreshing experience of learning—the exquisite striving at the limit of capacity to solve a problem with available knowledge. I was reminded that existence on the edge of the known has the fertility of hazard. In the thick of learning questions arise. For instance, can I, faced with the unknown, retain the quality of confidence? Can I be confident without having something, like a developed skill, to be confident in?

This state of confident unknowing is a rich condition for the arising of unexpected insight. On the snowboard I found myself crashing when it was time to turn. On the verge of desperation I spontaneously remembered the counsel I received when first learning to ski: When you want to turn, simply look in the direction you want to go, and you will go in that direction.

Though I had applied this guidance of keeping my aim always in view many times in activities other than skiing—working on myself, or on business projects, meditating, writing, doing building projects—I had not, until this late-winter day, put it into practice again on a ski slope. On the snowboard, I tried consciously directing my gaze as I wove my way back and forth down the slope. This completely obviated the need to do anything technical except direct my gaze and sense my body. Legs and balance followed attention and simply did what they needed to do. As if by magic, I ceased falling on my head, and the activity began to be enjoyable.

As I learned to snowboard, I realized with some dismay how I habitually gravitate to the known, choosing the familiar and comfortable, instead of the path that will be more difficult and lead to an expansion of being. I realized that this is a real inner choice I am faced with repeatedly each day. Do I bob like flotsam down the river of life, lazily paddling toward eddies of familiarity and comfort, or do I propel myself toward the rapids, or even another river altogether?

There’s a disposition that combines artistry and warriorship, looking to each situation as an opportunity for both creation and work on oneself. Only to do the more difficult thing is a peculiar form of masochism; but to insistently choose the course that is both difficult and creative, thus steadily threading life with series of bold creative events, is to choose a life that is real.

A native of the Hudson Valley, Jason Stern founded Luminary Publishing and launched Chronogram magazine in the Summer of 1993. Since then he has guided the company and the launch of multiple magazine titles. Jason remains passionate about adding value to the cultural, spiritual, and economic wellbeing of the region. He lives in New Paltz with his wife, cofounder Amara Projansky, and their two children.