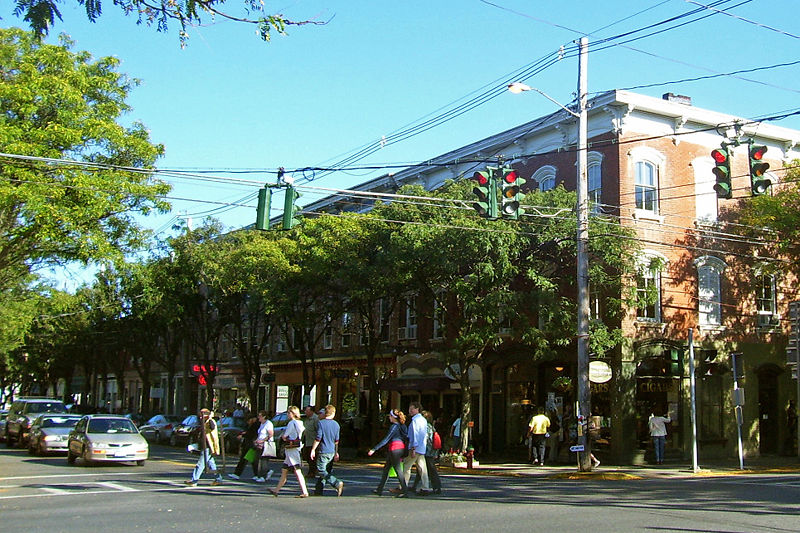 Oh, it’s so obvious, you say. I already know what Rhinebeck is: The Hamptons of Dutchess County. Well, I happen to disagree. I have the taste of a person with a much higher income, it’s true, but I’m not drawn to Rhinebeck because of its high-end restaurants (much as I love Gigi) or its patina of wealth. I like it because it reminds me of my hometown of Saratoga Springs in the right ways. I like the neighborhoods surrounding downtown, many of which have lovely, modest-ish 19th century homes. I LOVE Upstate Films — art movies, downtown — and I like the health food store, and the yoga place, and the old fashioned five and dime. There’s a whole extant layer of Rhinebeck from its pre-rich folk days, and that’s what I cling to.

The town was the discussion of some of our readers last week, chatting about Rhinebeck versus Rosendale after I put up this Rhinebeck house on River Road. (Some readers stopped by to see it and said it was very close to the road, making it less attractive to those of us with cats and children). And, yeah, Rosendale is a lot more chill, less refined, more hippie-dippie than Hamptons. But that’s the case in general when you look East versus West. The East side has always been home to the more affluent. It had the railroad, the grand estates, the land that’s been tamed for centuries. The West side — the Catskills — feels far more rural and isolated, much more in the trees and woods and mountains, which is what many folks are looking for. I’m looking for woods and cappuccino and train stops, which makes me more prone to East side desires.

So, yeah, Rhinebeck real estate can be pricey. The average listing price as of this writing is almost $750,000. But the average sales prices is less than $350,000. You can find something wallet-friendly there. At least, that’s our goal for this week.