In January, my husband and I purchased a full-time home in Woodstock after being weekenders for two years. After searching for a few months, we finally found a home that interested us. It was a modernist, unique hyperbolic roof home that was directly above the Sawkill Creek. The grounds and landscaping were amazing, and it had multiple levels of bluestone terraces, one of which wrapped around the upper level and each bedroom had access to. We were told it was built in 1970, and from what we could find, had two owners since being built. (The current owners at the time we purchased) and the owner they purchased from (who coincidentally built/owned Skytop Steakhouse in the 70’s). I thought it was out of character for a 70’s home. The architecture and some of the materials (down to the 1000 square feet of salmon pink terrazzo 20×20 tile) were so 1950’s modernist in style, that I figured it must have been someone trying to replicate a home from that decade. 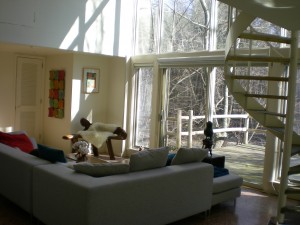 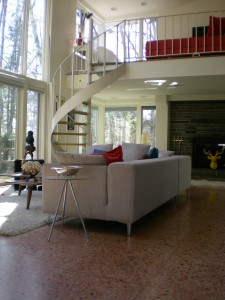 We moved in and began to notice that it was freezing inside (even in this mild winter). We had to start planning the upgrades needed to get the home energy efficient to 2012 standards and fuel prices. The cantilevered window vents in the master bedroom, and the single pane glass seemed out-dated even for a 70’s home. It also felt it had very light if any insulation between the cement block exterior and the inside of the home. We took a trip to the assessors office to take care of some business, and mentioned where we lived. The Assessor said he had thought the home was built by a prominent architect for a burn victim to stay as cool as possible as to not aggrivate his condition. He also mentioned that at the time it was built there was quite a bit of press on the home.  THIS HAD TO BE TRUE, our house was FREEZING even with a huge oil fuel bill! Although the information was wonderful to receive, it also sank our hearts at the fact that we purchased a home located in the Catskill Mountains that was specifically DESIGNED to stay as COLD as possible. 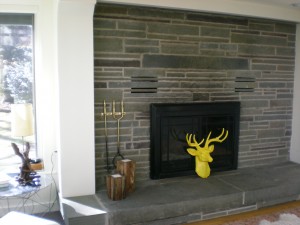 A month goes by and the weather started to heat up. We started to “warm” on the house a bit, after being able to spend time outdoors in the landscaped property and hear the rushing creek below. I continued thinking about some of the features of the home, and that it just didn’t seem possible it was built in the 70’s. I also was quite curious who this prominent architect was? I decided to try to research as best I could online and see if anything would come up. I spent a good amount of time and came up empty handed. Maybe I was wrong? 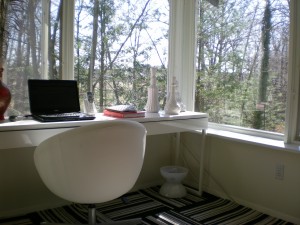 The features were too specific, the lack of insulation and windows, the actual condition of the homes exterior cement walls, and even some of the trees seemed too mature to be planted in the 1970’s. I called back to the Town’s office. I spoke to the building department hoping that they had on file the permits from when the home was built which would specify the architecture firm used. I could then phone that firm if they were POSSIBLY in existence still to get more information and blueprints. The building department did not have permits for anything except some renovations done in 1990. I was crest-fallen, but she said she was going to talk to the assessors office and call me back. Less than 30 minutes later, she did. She gave me a piece of news that I think is quite interesting and shows how important this is  for everyone when they are purchasing a home to do. She told me that the home was actually built in 1952! I had been right the entire time. My gut feeling on the house had been correct. They had done renovations in 1970, and because of the age of the records that was the first thing they had on file. I also was able to get the first owners names, which although I was interested in- would probably not be of use considering they likely were no longer living.  I was wrong this time! The owner is still alive at 91 years, and happens to be a well known abstract expressionist named Sal Siguro who lives in Manhattan, and has work at the Museum of Modern Art, The Zimmerli Art Museum of Rutgers University, the Grey Art Gallery of New York University, and Vassar College. Sal Siguro is the owner who suffered burn injuries that this home was built for. Now I just need to find out who this architect is… Everyone who is at the stage where they are ready to put in an offer should use these local town resources to your advantage and get the true history of your home, and the true age. Do not trust the real estate information as being up-to-date or in-depth.  For me, it was a great piece of information and yet once again a slight heart sink. Our home is more architecturally significant, yet it is older and the condition of some of the materials used to build the foundation are showing. It will be a labor of love to keep this home in tact and restore it to it’s original condition and expensive to update it to become more energy efficient. Also, could this possibly (and shouldn’t this possibly) effect our taxes and the value of our home? Our home is about 20 years OLDER than they have on file, yet the information came directly FROM the Assessors office. A tricky situation to navigate, and yet quite worth it if it reduces the hefty taxes.

Any home more than 25 years old should be investigated with the town you are living in. See what and when permits were taken ou,t and also who the Assessors office lists as all prior owners on the deed of the home and any land associated with the home at any point. In the process you will get the most accurate information and also may find out some interesting history.