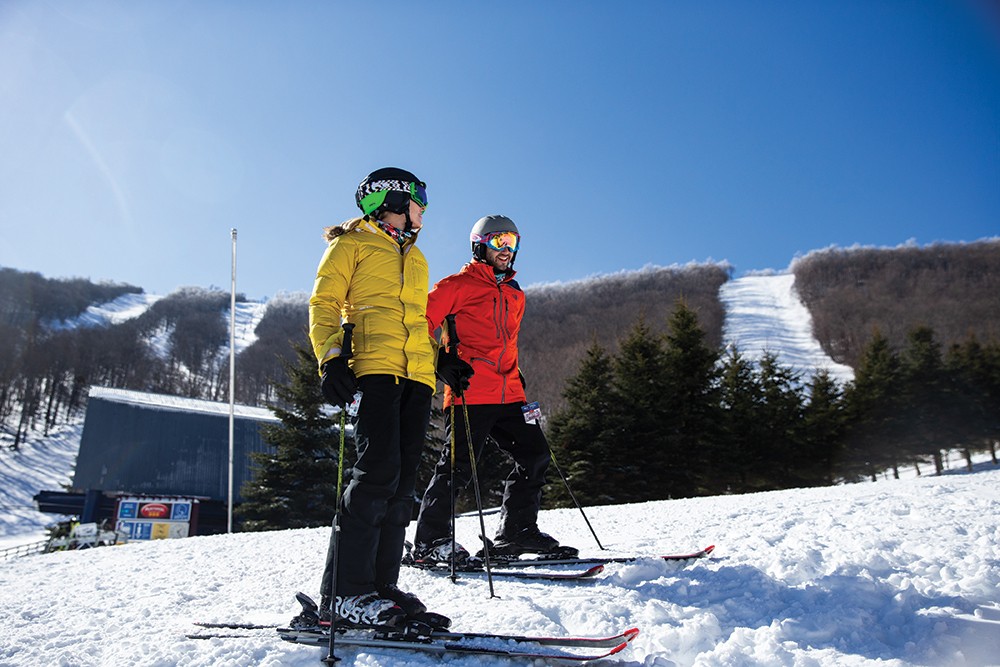 I’m a lifelong sledder. As a kid, I faithfully performed snow dances by moonlight to entice the weather gods to dump feet of powder and cancel school so that my neighbors and I could build a ramp off the back porch and sled away the day. As an adult, I’ve swapped hot chocolate for hot toddies, but it still never gets old. (Here are some public hills.) So I called my friend Vic, a veteran snowboarding instructor, to get the sitch on the mountains for those of you that engage in “real” snow sports.

Here’s the 411. Windham has top-notch amenities, a hotel, spa, and an excellent ski school, including an adaptive lesson program. But the terrain is flatter than neighboring mountains, which is great for beginners or skiers, but mabes a bit boring for snowboarders. Hunter’s got some of the most challenging slopes around (venture over to the West Side for even more), variable conditions, and moguls, plus a big ol’ food court with bars and restaurants for apres-ski. It draws city-folk by the literal busload, so be prepared to wait for the lift and dodge crowds on the slopes on weekends and holidays. And it’s freakin’ expensive. Now under new ownership by Vail, it’s only likely to get fancier and costlier. On the up side, their $700+ season pass includes partnerships with lots of other resorts.

If you just want to hit the mountain without the hassle of the hordes and the high-end price tag, Belleayre offers a low-key, chill environment. It doesn’t have a lot of the bells and whistles of its neighbors, but it’s got several challenging runs and excellent glade skiing. In this last snowstorm,  day passes were $95, which I’m told is cheap. (My sled cost $14.)

Down in Warwick at Mount Peter, where Vic had her first job, you’ll find small, hometown feels and lots of families. Unless you’re going with the kids though, “I can’t think of a reason to be there,” Vic says, adding, “It’s like 40 seconds top-to-bottom.” But the 600-foot tube run does sound fun, and the ski school is free.

Others to check out include Plattekill Mountain, in the postcard-pretty little town of Roxbury in Delaware County; and across the river: Catamount Mountain Resort in Hillsdale, which has night skiing and adaptive lessons; and the wee Thunder Ridge Ski Area in Patterson, with four lifts, 14 trails, a fun terrain park, and direct train service to Grand Central.