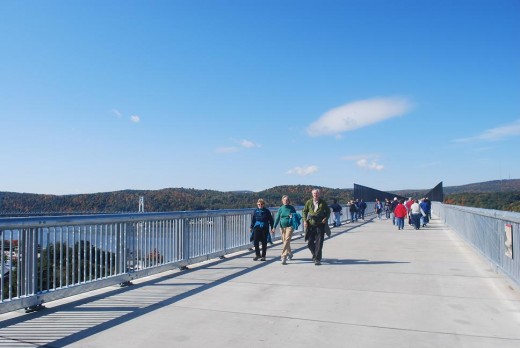 Walkway Over the Hudson, via Wikipedia

When we first heard about the Walkway Over the Hudson proposal to turn a disused railroad bridge into a pedestrian park several years ago, we thought it was a fabulous idea. Driving across the Hudson River on the various bridges is all well and good (and for real fun, try kayaking across!! Yowza!), but zooming by going 45 miles an hour, you miss all the good stuff in and around the river. Taking the mile-and-a-half stroll across the world’s longest elevated footbridge that spans one of the most magnificent rivers in the country is a treat and an educational experience, to boot. Interpretive signs line the walkway’s railing, and there’s even an audio-visual self-tour cleverly entitled Talkway Over The Hudson. Visitors can start on either the Ulster County trail head in Highland or the Dutchess County trail head across the river in Poughkeepsie.

So what to do once you’ve crossed from the Ulster side to the Dutchess? If you’re incredibly ambitious and love to walk, take a sharp right and head towards the river to the Mid-Hudson Children’s Museum. WARNING: It’s a schlep. We’ve done it, but it was long and a little exhausting (especially on a hot summer’s day). Maybe take a cab, instead. Or park your bikes on one end of the Walkway and meet them there after you’ve crossed. However you do it, just do it. The Mid-Hudson Children’s Museum is a must-see, even if you don’t have kids and just like to play with stuff. There are tons of great exhibits (they even an have an inflatable planetarium), and they’re open until 8pm on Saturday nights. And for Father’s Day, all dads get in for free. Visit the museum’s website for info on exhibits, hours of operations, admission rates, etc.