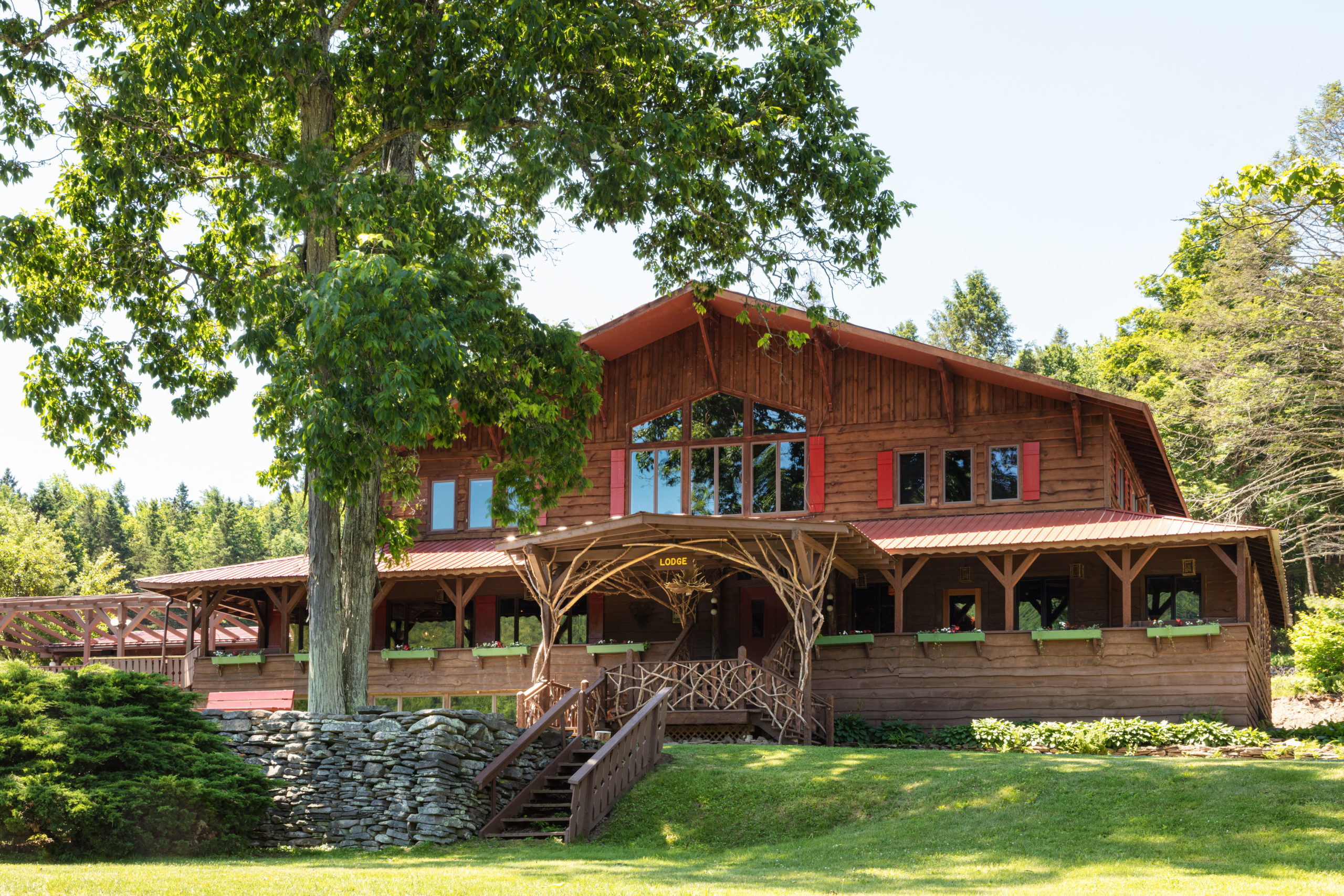 On a quiet, nondescript, residential block in Williamsburg sits an inconspicuous, two-story townhouse with only a crimson door and a steer skull to hint at the Americana oasis within. The first Urban Cowboy B&B location in Brooklyn developed a sort of quiet cult following as a playful and hospitable design destination hidden in plain sight. “The juxtaposition of the Americana aesthetic with this Italian family home-style block—it was cool, underground, beautiful, unassuming” says Ryan Kresser, task force operations team member for the newest Urban Cowboy location in Big Indian. “It turned into this family of rotating guests who would crash for one night or two weeks or two months, while working on projects or flying through on layover. It grew really organically.”

A project of Ohio pro hockey player-turned New York City real estate broker Lyon Porter, Urban Cowboy snuck onto the scene in 2014. The concept takes the kernel of homey hospitality underlying the traditional floral bedspread bed-and-breakfast and updates it with a modern sensibility. It’s a B&B without the old, nosy innkeepers, a boutique hotel without the pretension. The design-forward interior has a huge glass garage door leading out to the backyard, painted exposed brick, industrial shelves of records, and decor spanning a delightful hodgepodge of eras. 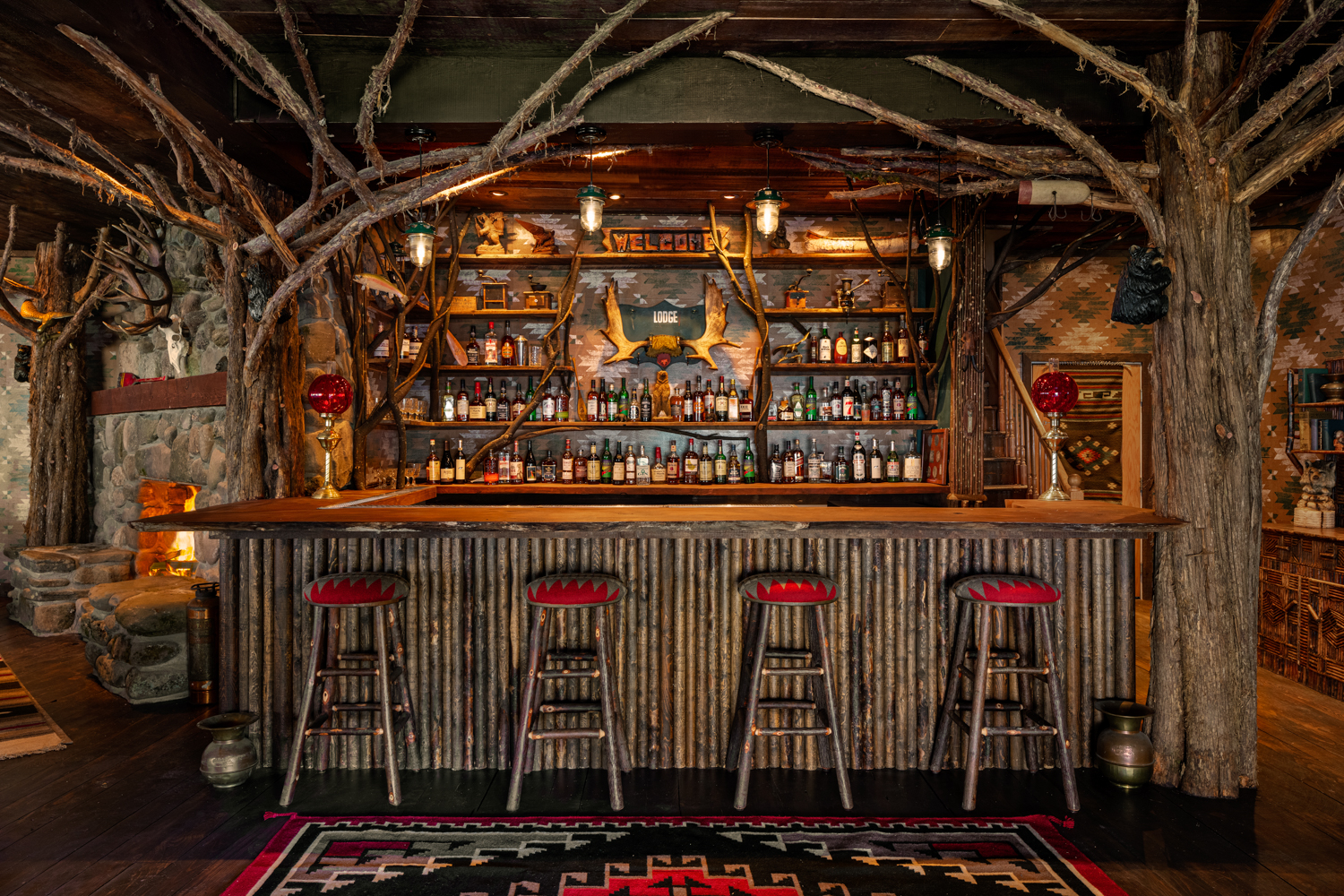 The bar at Urban Cowboy Lodge. Photo by Ben Fitchett.

Urban Cowboy’s rapid recognition led to a second location in up-and-coming East Nashville a few years later. “We found this amazing Victorian mansion and opened down there,” Kresser says. “The aesthetic works very well in Tennessee—a sort of homage to the Americana aesthetic with Western influences.” This successful launch was followed quickly by another adjacent project—the Dive Motel, a bar, accommodation, and swim club also in Nashville. “All the rooms are wildly different—different wallpaper, color schemes, patterns,” Kresser says. “Each room looks like it was a page taken out of a ’70s magazine.”

With three successful and trendy lodging businesses under his belt, you might think Porter would be content to stop. But like a good broker, he saw the tide of upstate interest and rode the wave. He bought a lodge on 70 acres on a dead end road in the remote hinterlands of Big Indian.

“It was previously called the Alpine Inn,” says Kresser. “It was one of the classic, heritage Bavarian Catskill family hotels. The family lived onsite. Dad was in the kitchen as the chef, Mom was out front checking people in, and the kids were running around doing whatever was needed. We’re running it in a very similar way.” Kresser, who lives onsite, was brought in from the Brooklyn location along with Lemon Dinneen, who came in from the Nashville outpost, as short-term consultants on the new project. But when the pandemic hit, they ended up staying on through lockdown and then shepherding the new hotel through its first summer. 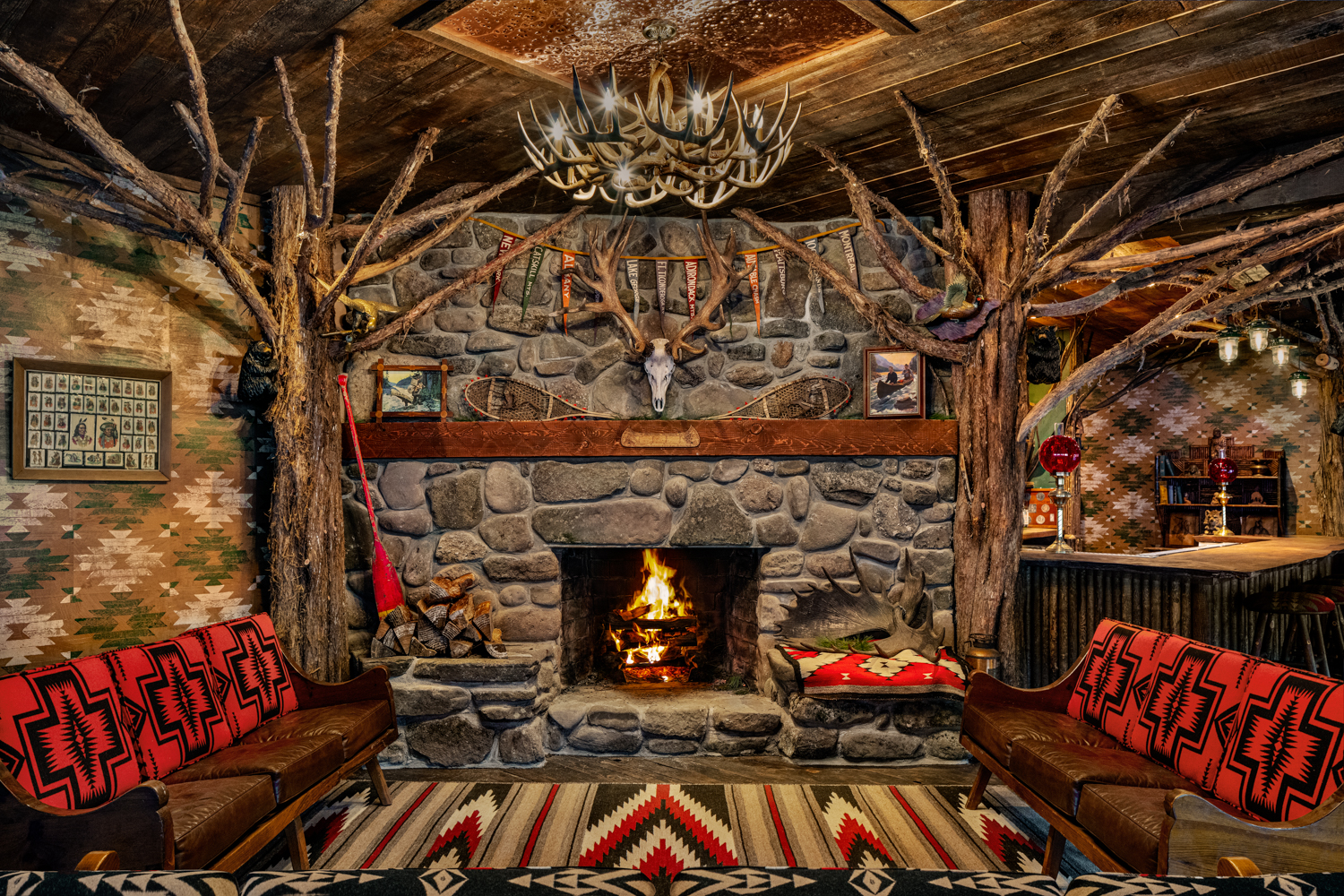 “We were supposed to open in March,” Kresser says. “We went through the full hiring process. We went through trying to launch a restaurant. We were ready to hit the ground running, and did so for three days before lockdown. It has been a pretty wild adventure. We relaunched as this version of ourselves in June.”

The upstate Urban Cowboy outpost has 28 rooms spread across five buildings. The decor blends the Americana/Western style that has become the hallmark of the Urban Cowboy brand with some more Adirondack lodge elements for a look that is suited to the vernacular of place. Rooms feature bold, jewel-tone geometric wallpaper design that climbs onto the ceiling, wool blankets with Southwestern and mountain patterns. The floors are warmed with simple flat-weave rugs, the walls accented with antlers, vintage toboggans, snowshoe light fixtures, and the like. Several of the suites have wood stoves and glamorous clawfoot soaking tubs set beneath picture windows with breathtaking views of the Catskills beyond. The look is decidedly eclectic, perhaps even a little chaotic, but most definitely disarmingly unpretentious. 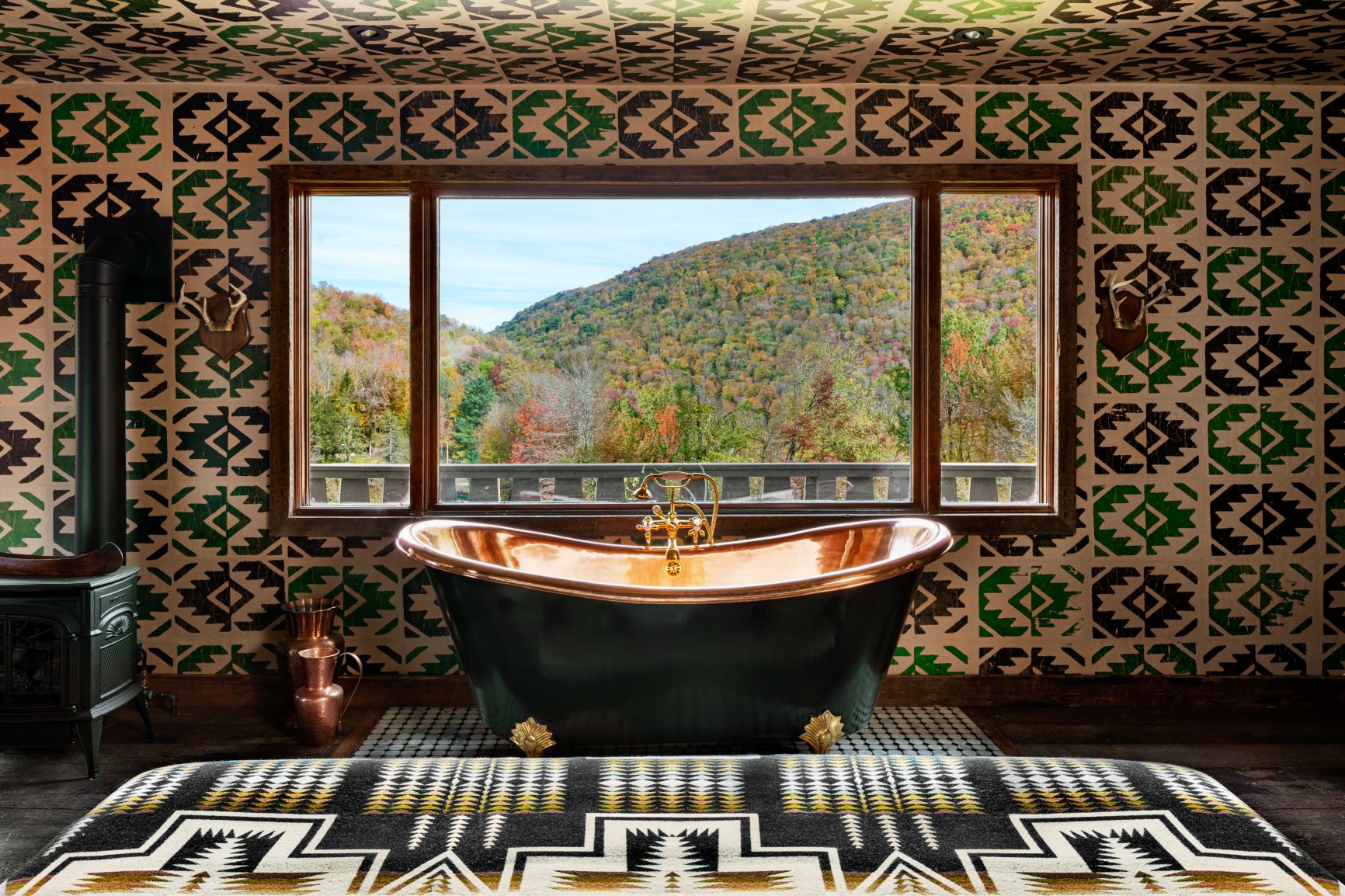 One of the Urban Cowboy signature suites with a copper clawfoot tub and panoramic mountain views. Photo by Ben Fitchett.

The main lodge building has a restaurant, kitchen, bar, and two lounges, which are open to the public. Despite a shaky start, the new location gained traction quickly with city escapees. “We were unreasonably busy this summer,” says Kresser, who adds that some guests have returned up to four times. We’ve been saying that our biggest amenities are the 70 acres, fresh air, and lack of cell service. It’s supposed to be a reprieve from the city. We used all of our land. It was really fun to see people socially distanced outside, bringing their own lawn games and drinking beers and sitting on picnic blankets.”

At the bottom of the hill, the B&B has its own swimming hole in the Esopus Creek. In addition to the 70 acres of field and forest guests can wander (on which they will be cutting trails this winter), Giant’s Ledge, one of the best hikes in the Catskills, is just down the road. 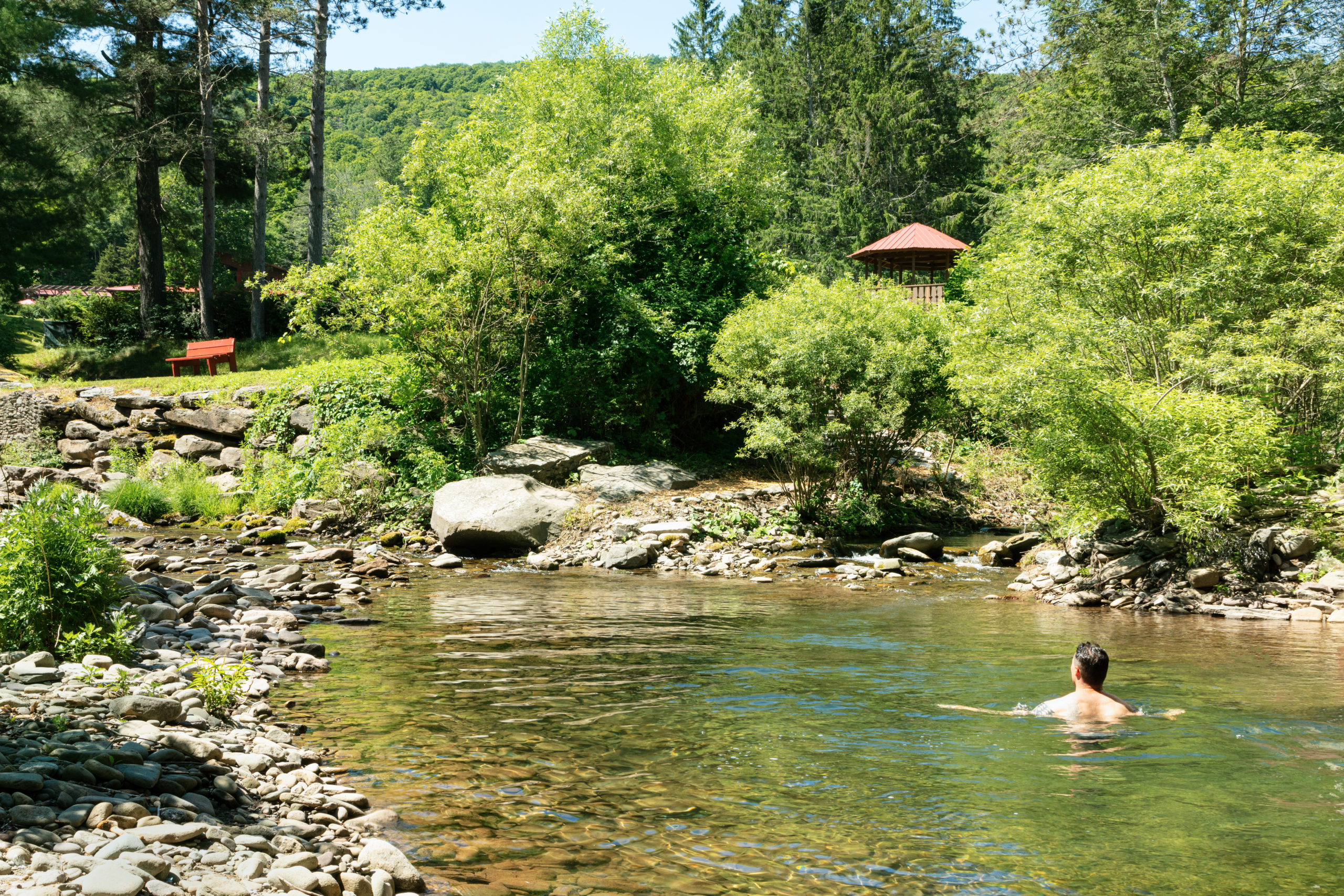 The swimming hole in the Esopus Creek. Photo by Ben Fitchett.

Plans for the onsite restaurant fell through this summer, as the skeleton crew tried to figure out a new way forward with limited staff. Ultimately, the solution they found was a collaboration with iconic Brooklyn pizza joint Roberta’s.

“Roberta’s has been friends of the Cowboy for a long time,” Kresser says. “We’ve been circling around trying to figure out ways to partner with them; the stars aligned this summer when we were thinking about how to provide food outdoors. They have a mobile pizza oven that they usually bring to parties and catering events that they parked here.” 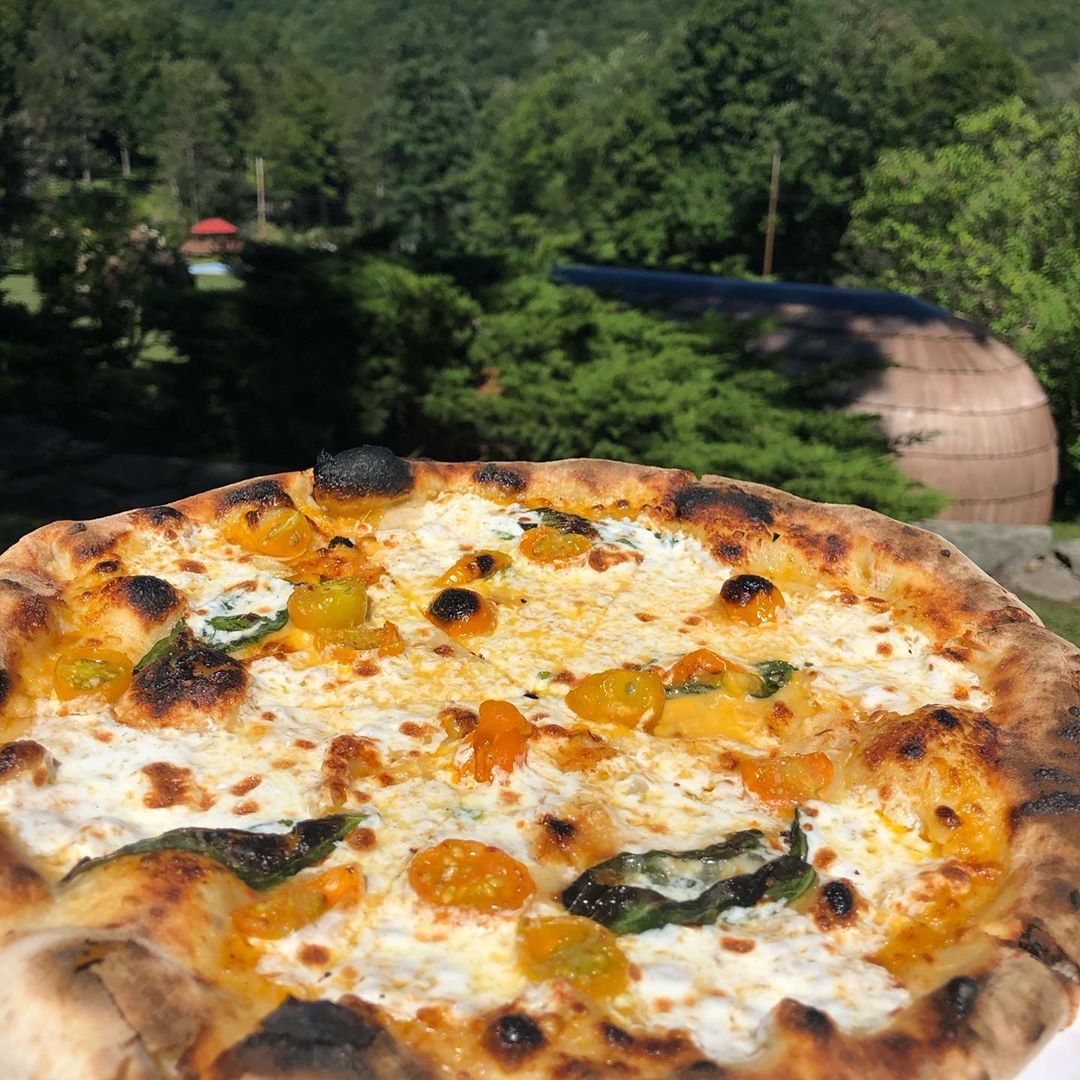 Turns out the famous sauce and thin-crust pizza was a big draw for locals as well as out-of-town guests. “We saw that Roberta’s was a great bridge to meet people in the neighborhood,” Kresser says. “We had a bunch of families that would come every week, bring the kids, and post up on the lawn. So, it was a great excuse to meet a bunch of people.” In addition to their pies, the Roberta’s pop-up has been serving up burgers and veggie burgers, pasta dishes, and elaborate salads.

As the weather cools off, Urban Cowboy Catskills has moved to limited indoor dining, with Roberta’s sticking around to offer food through the end of the year. “I’m excited to have them inside by the fireplaces,” Kresser says. “People snuggling into leather couches with pasta dishes and pizzas is just a very cozy vibe.” The team is in the process of hiring a chef and new food and bev team to take over the in-house program, which they are hoping to launch in January. 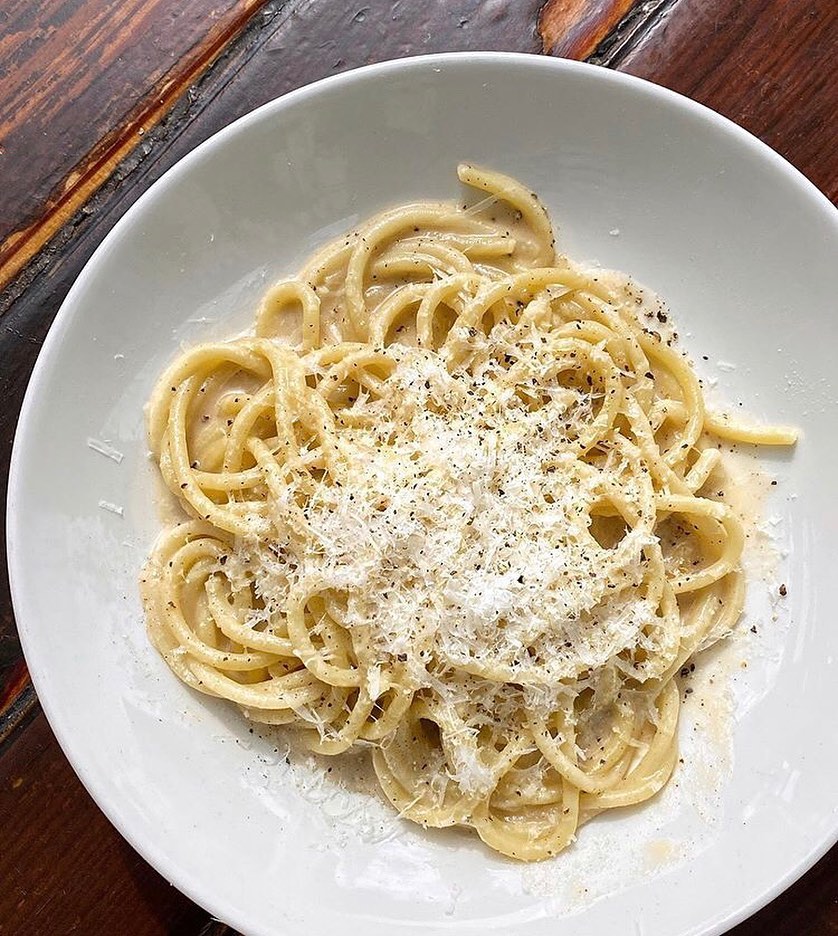 But don’t worry, Roberta’s will likely be back at the Big Indian outpost next summer, and in the meantime is sending one of its mobile ovens to the Tennessee Urban Cowboy location in December.

In addition to the in-house food program, this coming winter and spring will see further development of the amenities. An Estonian sauna is being with the option to do a wintertime cold plunge in the creek. A massage program is under development, and by next summer the inground pool will make its debut.