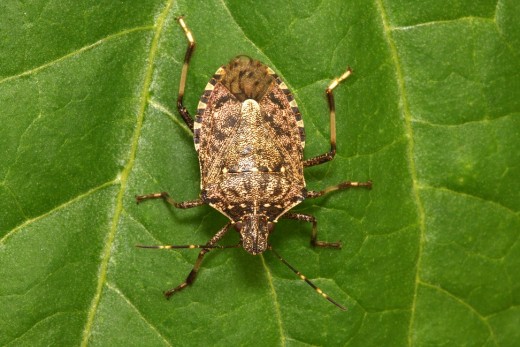 I don’t like stinkbugs. More accurately, I loathe stinkbugs with the hot intensity of one thousand blazing suns. The only insect I might loathe more is the silverfish, but that’s a story for another time. There’s really no good reason for me to apply such vitriol toward a fellow living creature that, to my knowledge, has never done anything to harm me, and yet, the very sight of that prehistoric-looking carapace fills me with rage. Don’t even get me started on the weird sound they make when they fly in drunken circles around my kitchen light fixture. Peace loving vegetarian that I am, though, I never lay a hand on them when they venture into my house. I simply catch and release. And I have a feeling that I’m going to be doing a whole lotta catching and releasing, the first few days of spring are any indication. The stink bugs are back in full force, and they apparently love my bedroom and kitchen windows.

– Stinkbugs are an invasive species. They don’t belong here. They were brought over in crates from either China or Japan.

– Stinkbugs “stink” because they emit an unpleasant odor when they’re threatened or squished.

– Stinkbugs go dormant in the winter. That one that’s been clinging to your curtain forever? It’s not dead. It’s taking a super-long stasis nap, just like Ripley and the crew of the Nostromo.

– Stinkbugs wake up when warmer weather comes, but they experience a rough re-entry because they don’t eat when they’re dormant, so they’re hungry, weak, and easy to kill.

– Stinkbugs’ arch-nemesis is the Trissolcus halyomorphae, a parasitic wasp that will lay its eggs inside stinkbug eggs.

– The pesky critters aren’t just an indoor annoyance. They also destroy crops, and that’s a big problem around the Hudson Valley where there are farms aplenty. Their numbers are growing, too. So much so, in fact, that a Cornell University lab in Highland wants you to help monitor the spread of stinkbugs (Brown Marmorated Stinkbugs, to be exact) by capturing them in a small container and mailing them in. Or, if you can’t stand the creatures as much as me, you can snap a picture with your smart phone and send it in to bmsbproject@cornell.edu. Put your disgust/fascination with stink bugs to use for science. Don’t let those creeps win. In the meantime, the only way to keep them out is to seal up all the cracks around your windows and doors. Once they come in, they won’t want to leave. Find out more on getting rid of stinkbugs here. Otherwise, you can do what I’m tempted to do whenever I see one: Burn the house down and start over again.