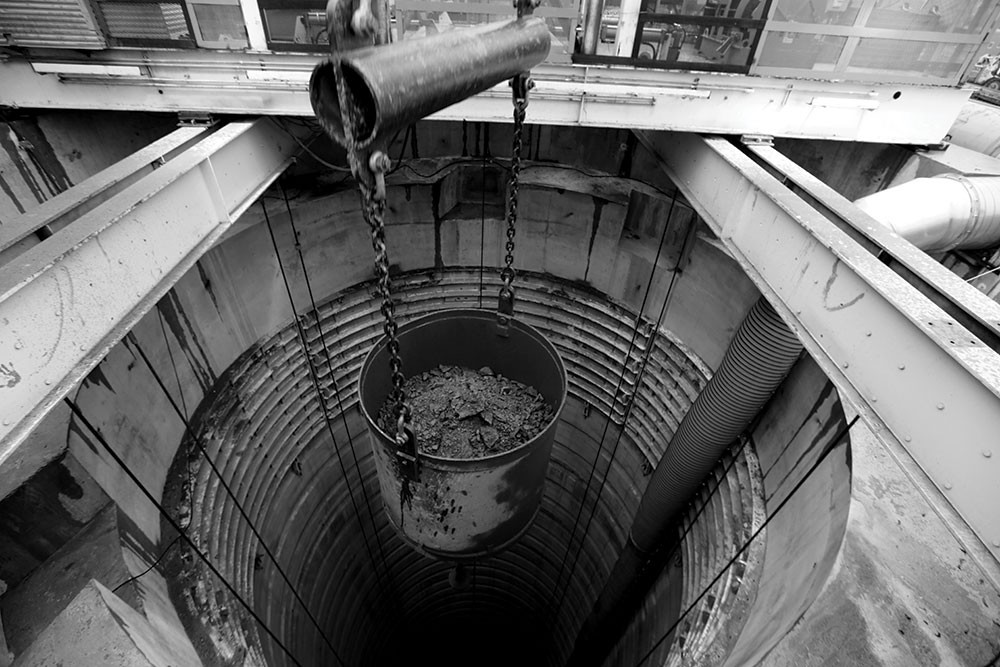 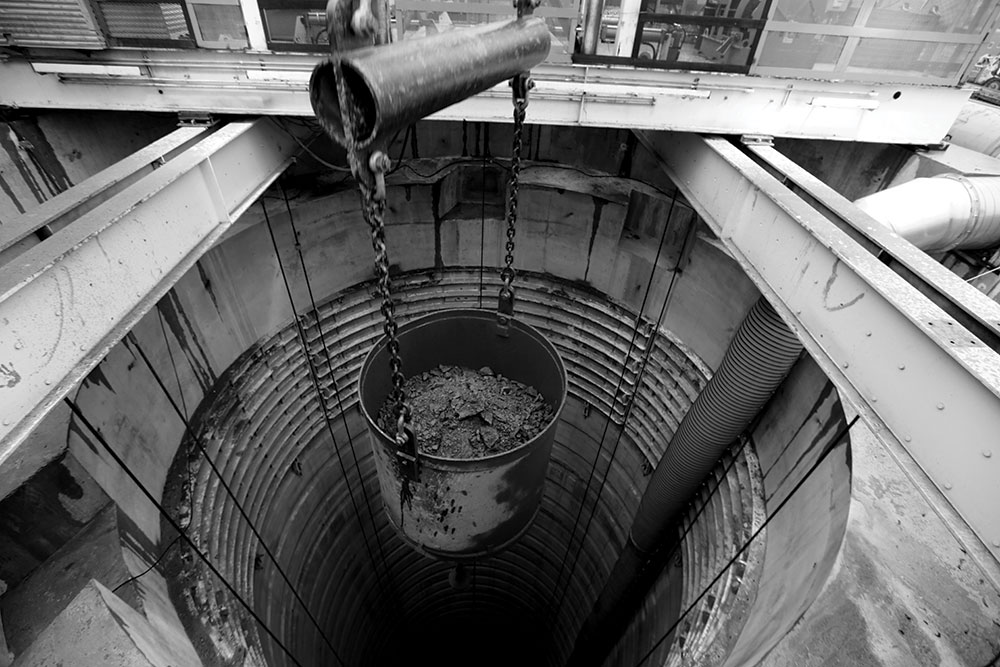 The shaft is so deep that it’s hard to make out the bottom. A few yellow hardhats bob amid the gray sheen of the shale that has yet to be coated in concrete. It took two years of methodical blasting to delve this far. The big, gaping hole in the ground, some 34 feet in diameter, is called Shaft 6. It’s 675 feet deep, 600 of those feet below sea level, just north of the Newburgh-Beacon Bridge, on the eastern bank of the Hudson River in the Town of Wappinger. This will be the end point of the new Rondout-West Branch Tunnel, where a bypass is being built to circumvent a section of the Delaware Aqueduct that has been leaking for over 25 years.

This massive pipeline carries 1.1 billion gallons of water daily from the Cannonsville, Pepacton, Neversink, and Rondout Reservoirs to the Croton Watershed and into New York City. At 85 miles, it is the world’s longest tunnel, beating out recently constructed water pipelines in Finland and China. It supplies 8.4 million people in the five boroughs and another million north of the city, where dozens of towns tap into the line along the way.

Since opening in 1948, the tunnel has done its job admirably—except for two sections. One is beneath Wawarsing in Ulster County, the other below the Town of Newburgh, where the tunnel slips under the river. The aqueduct mostly cuts through shale, except for two places where it passes through more porous and permeable limestone. In those two spots, cracks have emerged, leaking up to 4 percent of the total flow—–15 to 18 million gallons a day, or 360,000 filled bathtubs—or almost double that, depending on volume. “It’s not an insignificant loss,” says Adam Bosch of New York City’s Department of Environmental Protection (DEP), which manages the water supply. “You’re putting all that work into collecting the water and protecting the water, and you don’t want to be losing it through leaks.” 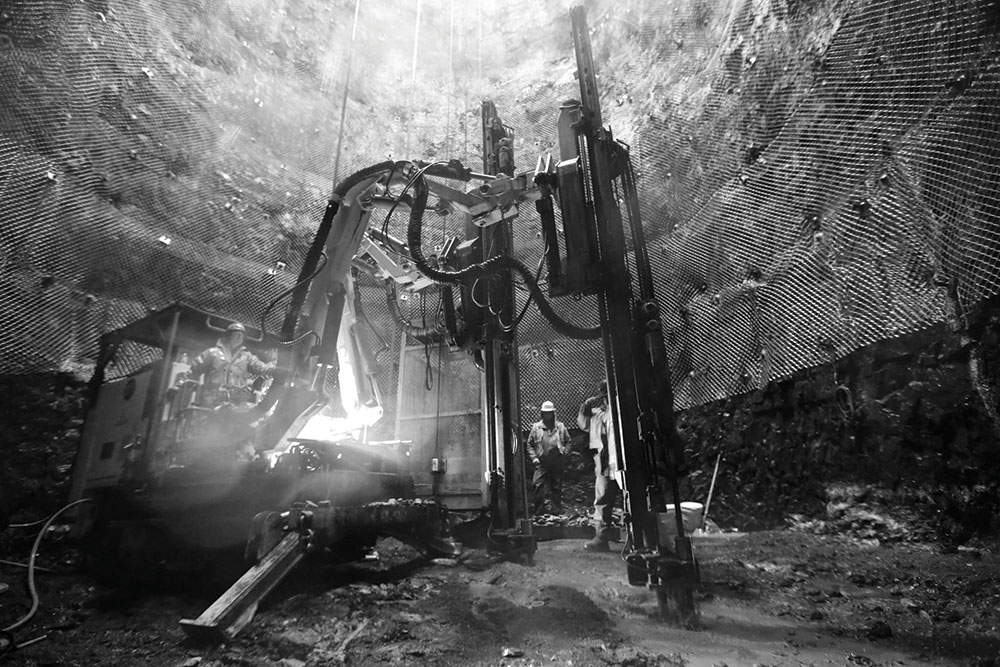 Now a vast project more than 20 years in the making is being undertaken. It’s a public works project of a rare scale, although almost nobody will notice or feel any effects: a DEP repair job that will take until 2023 to complete and cost $1.5 billion, paid for entirely by water bill revenues. It’s the largest, most complex fix made to New York City’s labyrinthine water system of aqueducts since its 1842 origin—a project that calls to mind the ancient Romans, who pioneered the gravity-powered methods the Delaware Aqueduct relies on. “It’s the largest water supply system in the country,” says deputy DEP commissioner Paul Rush. “This project impacts the place where the city gets half of its water. It’s a massive project that’s going on silently.”

On the construction site, the scene looks even more archaic, positively Flintstonian. A giant bucket lifts the rubble from the pit through a pulley system, tipping it over the edge and into a horseshoe-shaped receptacle. The construction is padded to lessen the noise for residents nearby.

All that shale existed in the ground undisturbed for hundreds of millions of years until someone decided to name the buildings above it the Town of Wappinger and, shortly afterwards, blast the rock out. A round of explosions unloosed 10 feet of rock at a time, to be hauled up and donated to public works like Beacon’s Long Dock Park or sold commercially. Once 100 fresh feet were excavated, the walls were coated by a two-story tall, spider-like machine, which rotated and spewed concrete to form a neat cylinder.

The shaft is so deep it’s several dozen degrees warmer down there than at its edge, thanks to the machinery, the lack of wind chill, and it’s being over 600 feet closer to the earth’s core. Around the gaping hole, the size and physics of the equipment beggar belief. Rods of rebar, the size of skateboard ramps, have been welded into pre-assembled sheets, bent to fit neatly along the new walls to fortify the concrete. The nuts and bolts being used are as big as dumbells. 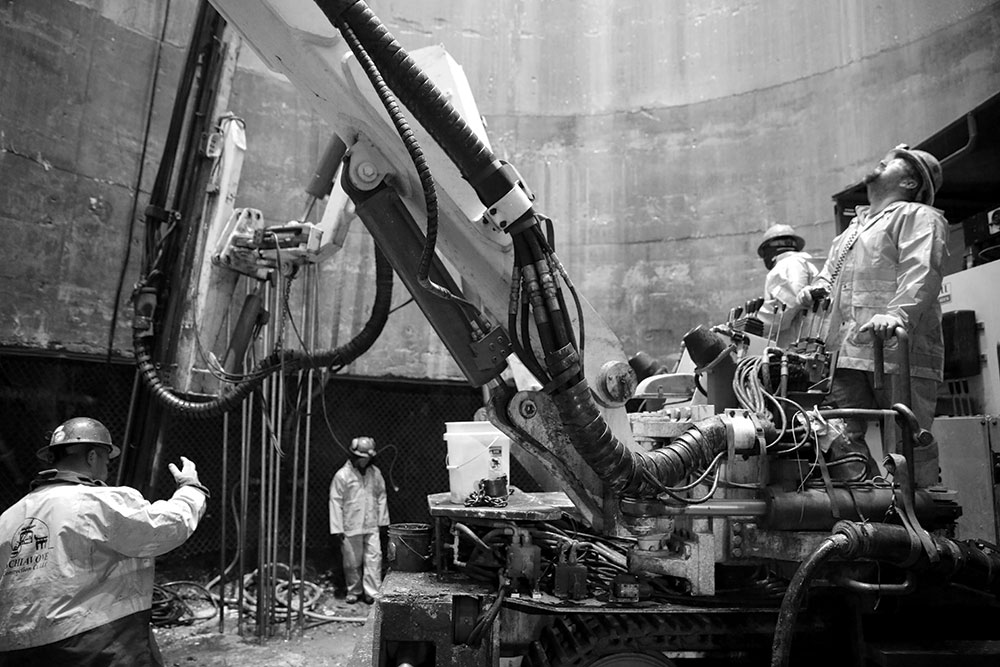 Across the river, along Route 9W in the Town of Newburgh, near Marlborough, the same thing has happened, except that shaft goes 850 feet down, because it’s being excavated from a bluff. It will have a large chamber at the bottom for a horizontal boring machine and sump pumps. Horizontal drilling will begin sometime in 2017, tunneling 600 feet below the river’s deepest point.
The problem all this will address was first spotted in the early 1990s. A Central Hudson employee noticed bubbles along the Hudson’s western bank at low tide. Water was shooting into the river from somewhere below, but it could only be seen from nearby, from a narrow strip of land cut off by train tracks. The water there was found to contain copper sulfate. Only the DEP’s pipeline had used that chemical in that area to clear it of algae, but it hadn’t been used since, so it could only have come from the Delaware Aqueduct. However, in the 1990s, technology hadn’t yet advanced enough to pinpoint the leak’s source, let alone plug a crack while it gushed vital tap water, as deep below ground as skyscrapers are tall. It would take another 20 years to figure out how to get it done.

Read a brief history of the water system here!

In 2003, a robotic submarine developed by the Woods Hole Oceanographic Institution surveyed the length of the 45-mile tunnel between the Rondout Reservoir and the Croton Watershed, taking 160,000 pictures and gathering data to map the problem. The pictures will allow the DEP to plug the small holes leaking under Wawarsing with a dense grout. But the images also confirmed that the leak by the Hudson wasn’t directly below the spot where water was rushing into the river. The water was actually traveling sideways as well as upward, so the crack was further west and inland from the river.

The section under the river passing through limestone was lined with steel to retain the integrity of the rock, but that casing hadn’t been extended far enough into the river’s banks. Where it ended, cracks had formed, letting water escape. The only solution was to drill a second tunnel, adjacent to the old one, connect it to the waterline before it hit the unsalvageable problem spot, and cap the old waterway. But that would mean closing down the aqueduct for nearly a decade. How would New York City absorb the loss of 50 to 60 percent of its water supply in the meantime?

“Making this happen was seen as a near impossibility,” says Bosch, “because where would you get this water from?” But recent improvements across the water system and a concerted DEP effort to reduce water consumption in the city have made a Delaware Aqueduct shutdown viable. Technological advances have helped cut New York City’s water usage by a third since the late 1970s—from about 1.6 billion gallons per day to 1.1 billion—thanks to more efficient toilets, taps, and showers, and an aggressive DEP campaign to replace old facilities. The DEP worked out that if it modernized and restored the other aqueducts to their historic capacity, and installed filtration systems in Croton and tapped groundwater in Queens, it could compensate for the loss of the Delaware Aqueduct for a short period—not years, but for a while.

With a new tunnel dug beside the old one, which would keep running during construction, the flow of water would only need to be interrupted while the extremities were connected. That way, the interruption would only be six to eight months—sometime during 2022 and 2023—with enough water coming from elsewhere to bridge the gap in service. 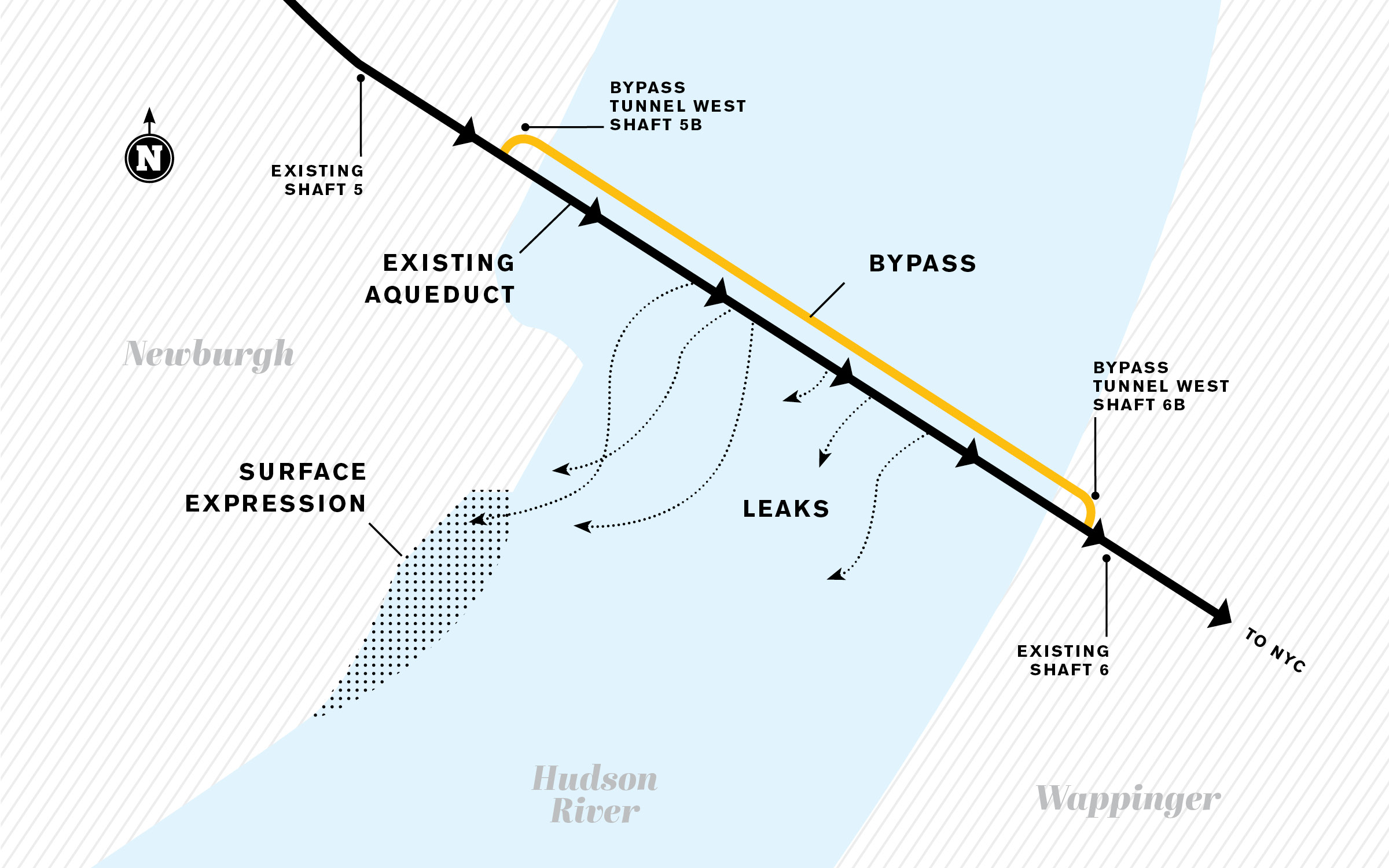 But there were more complications. Towns above and along an aqueduct have a right to purchase water from it and tap in, so an alternative water source would also be needed, requiring new linkups between towns and aqueducts, new wells, and interconnections between towns and cities, like Newburgh, with their own reservoirs. “There’s a lot of moving pieces,” says Bosch. “Everything has to happen in the right order.” (At press time, Bosch said the project is months ahead of schedule.)

Ironically, on the river’s eastern side there was no water supply to the building site. Houses in the Wappinger hamlet of Chelsea had their own wells. When the water lines were laid to the new shaft, Chelsea was plugged into the water grid—with pipes running up to every house’s front lawn for owners to tap into, should they choose. On the Newburgh side, there was insufficient water for firefighting, so hydrants were installed.

Finally, with the many problems solved, the shafts could be dug to serve as the connection points between the new tunnel and the old aqueduct. The new bypass tunnel will be 2.5 miles long, but drop just five feet—to maintain the downward slope from the reservoirs all the way down to New York City, allowing gravity to power it. But that means fitting the new tunnel to the old one has to be exactly right, maintaining the correct slope. (New York has cheap water rates—half that of the most expensive cities, Seattle and Atlanta—because it only has to pump 5 percent of its water electrically. It also doesn’t have to filter it much. The gravity-powered pressure is so strong that unless a New York City building is over six stories, no water pump is needed to force the water to rise.)

The tunnel will be 20 feet in diameter, including a six-foot steel lining—running deep enough into the riverbanks to avoid cracks in the limestone. The remaining 14 feet of water capacity are large enough to run a train through—in fact, a rail line will transport the rock out of the tunnel as it’s being excavated during construction. The tunnel will be so big that, if necessary, it could move all of New York City’s water at once, should other aqueducts need repairs. Amazingly, the rest of the aqueduct system needs nary a touchup. The shale it was tunneled through has proved enduringly reliable. The craftsmanship of this underground network of tunnels leaves today’s engineers stupefied. Except for the lamentable limestone cracks, the system, 175 years old in some parts, is in immaculate shape.

A few years from now, the Delaware Aqueduct will be pumped dry for the first time since 1957, touched up, and rerouted. Then water will flow below us again, and the old water system will resume its diligent service to people in the city and upstate, the overwhelming majority of whom will never lay eyes on the technological marvel that puts water in their faucets and showers.