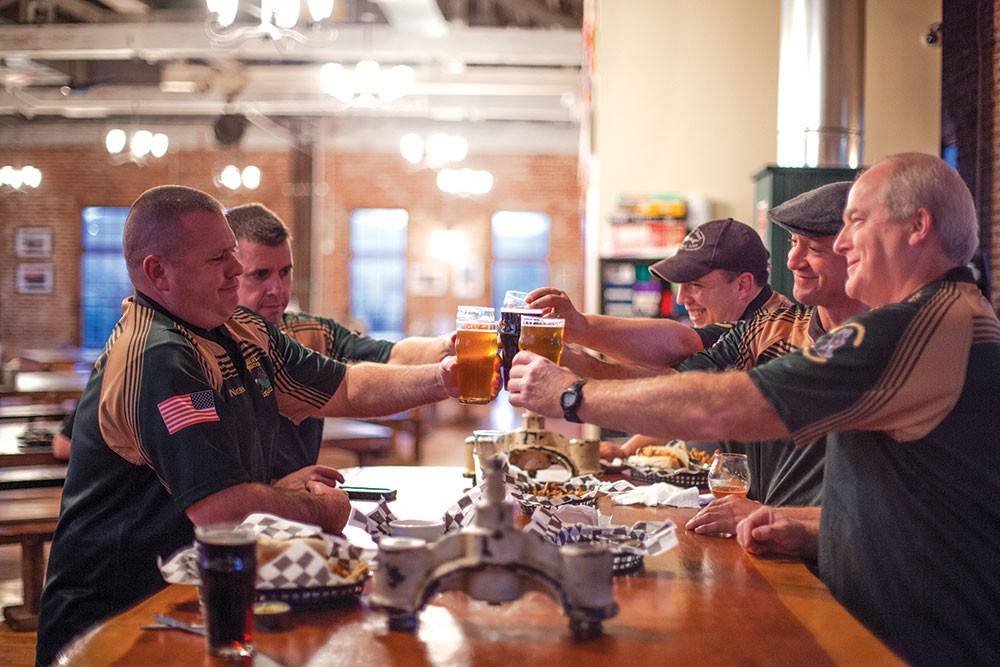 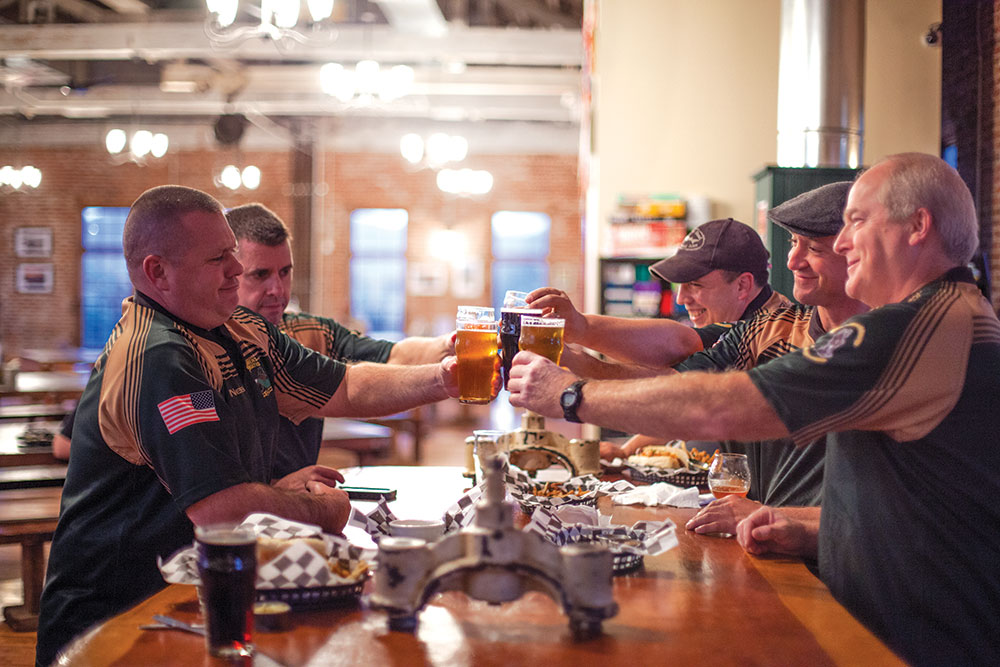 The numbers don’t lie: New Yorkers love craft beer.Since 2011, the number of microbreweries has tripled statewide from 51 to over 200. The Farm Brewery Act in 2012 helped fuel the massive increase, with one of the most

“There’s a lot of growth,” says Paul Leone, executive director of the New York State Brewers Association. “And in the Hudson Valley region, brewers have really come together and are working with one another.” Tim Adams, owner of Cave Mountain Brewing Company in Windham, calls it a “brotherhood” of brewers who happily support each other. For instance, Newburgh Brewery swaps equipment and ingredients with 2 Way Brewing Company, which does the same with North River Hops and Brewing, an ale brewer and retailer in Wappingers Falls. And Keegan Ales’ Tommy Keegan says he once borrowed equipment from Captain Lawrence Brewing Company in Elmsford for such a long time that he ended up buying it.

So, why all the camaraderie? Hudson Valley brewers see themselves not as competitors but as neighbors teaming up to put the region on the map. “It’s always been us against them—‘them’ being macrobrewers,” says Joe Vicidomini, vice president of Hudson Valley Craft Beer Week, a weeklong event held annually in September. “The craft brewer mentality is something like, ‘I want to make a great product, those guys over there want to make a great product. Let’s work together to stick it to the man.’” Local brewers even collaborate on beers like the cheekily dubbed Too Many Cooks IPA, brewed at Crossroads Brewing in Athens last spring by 12 Hudson Valley brewers (including Keegan Ales, Peekskill Brewery, Newburgh Brewing Company, and Cave Mountain Brewing Company).

Here are nine of the many pilgrimage-worthy destinations helping define the Hudson Valley’s craft beer culture. 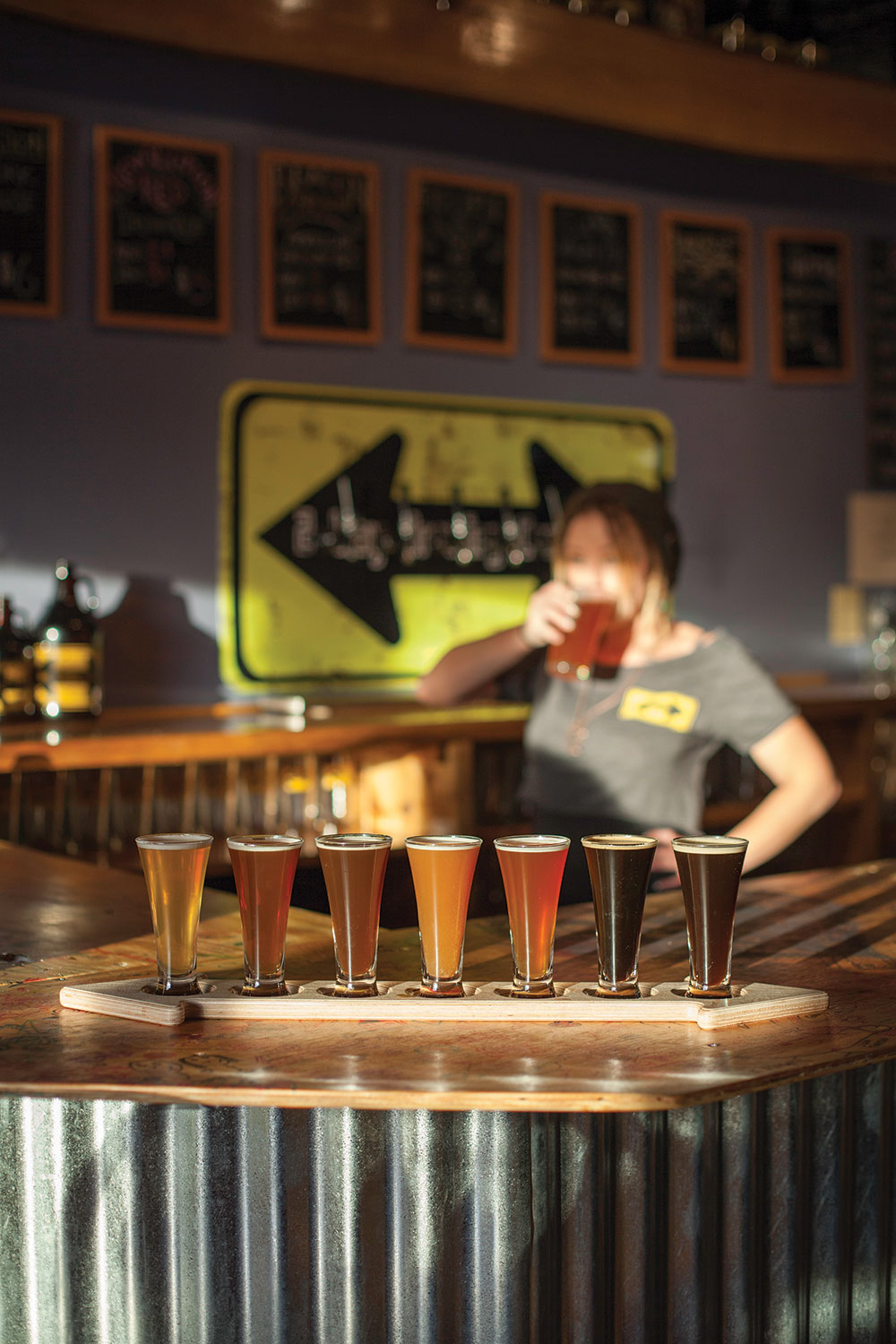 This Beacon brewer takes local to the next level. 2 Way’s Confusion beer is brewed with a proprietary yeast strain isolated from blackberries grown just across the river in Newburgh. This brew pub’s stainless steel brewing equipment is showcased by its industrial, pared-down space, making the focus on the beer very clear. Owner Mike O’Herron’s brewing process is pretty straightforward: “I think of something that I want to drink, and then I make it,” he says. To develop the special strain, which he describes as “actually very Belgian, with characteristic banana notes and a fruit-forward flavor profile,” he set up a makeshift lab in a spare bedroom. Balance is the most important factor in O’Herron’s brews, and standard-bearers like Revolution Red are no exception. The red ale is “designed for those who aren’t looking for sensory overload,” says O’Herron, and provides a malty counterbalance to the Willamette and East Kent Golding hops.

After several years at Brooklyn Brewery, Christopher Basso joined Paul Halayko to open Newburgh Brewing Company in their hometown. Halayko is glad to be back. “There’s an allure to being a part of Newburgh’s resurgence, to being a part of that community,” he says. Located a few blocks from the Newburgh waterfront, the brewery is housed in an old brick factory building and features German-style communal seating, lots of board games, and, of course, great beer. The Newburgh Brown Ale, for the money, can hold its own against any other brown ale in the country—it’s really that good. And at only 4.2 percent alcohol, there’s no need to feel too guilty about having another one. Bonus!

Owner Scott Vaccaro opened Captain Lawrence in 2005, following a dream that began in high school when he was “absolutely blown away by the idea that beer, the stuff that was the objective of many a covert mission to the local convenience store, could be brewed at home.” The brewery has made a name for itself with beers that have a characteristically American bent, like Freschchester Pale Ale. The tasting room is a destination in itself, with its laid-back atmosphere and full view of the adjacent brewing space, filled with towering vats of the good stuff. And Captain Lawrence always has something fun and unusual going on, like Stretchin’ and Belchin’ Yoga Class, a salubrious union of yoga and beer tasting that inarguably tops any contender for best embodiment of Hudson Valley culture.

“There’s a huge camaraderie among brewers here,” says Tim Adams, owner and chef of Cave Mountain Brewing Company in the Catskill Mountains. Getting there is half the fun, with an idyllic drive through the high country to this cozy, red-painted space with wooden accents. While Cave Mountain’s operations aren’t as large as other local brewers’, Adams sees that as an asset. Doing beer in small, hand-crafted batches, he says, allows “a lot of artistic license and flexibility.” Check out this season’s Scotch Ale, steeped with mulling spices, and pair it with one of Cave Mountain’s award-winning burgers. 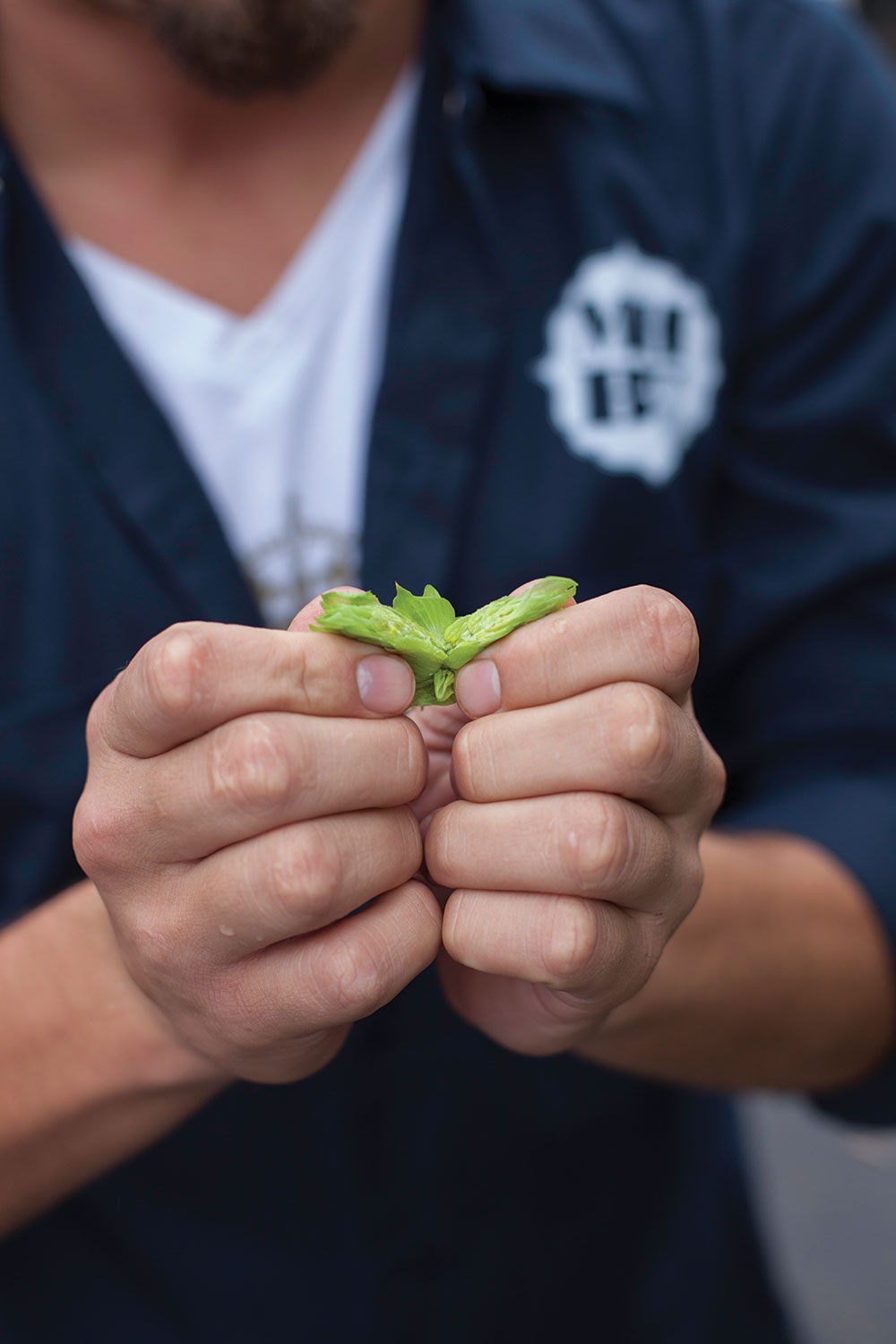 As Poughkeepsie’s premier brewpub since 2013, Mill House Brewing Company brew masters Jamie Bishop and Larry Stock, along with brothers Chris and Daniel Crocco, have established a destination for lovers of great beer and great food alike in their masterfully renovated 1836 historic building. The new design showcases historic details. One look at the massive bar looping around sloping brick archways proves their hard work paid off. The menu includes local ingredients and house-made brews. Check out Mill House’s fish and chips, which are battered with Alpha Ale, a hoppy red ale balanced out with a strong malt backbone. But the best brew to try is arguably the amazingly rich and smooth Velvet Panda Stout.

Rough Cut opened last June in Kerhonkson, but is already making a splash. While its rustic décor suits its off-the-beaten path location, Rough Cut’s decadent beers and local cuisine make it a destination it its own right. Its ambitious tap program features rye-based Mortise & Tenon Belgian Double; Roseability BPA, brewed fresh with rose petals; and Pomme D’Orange Belgian Tripel, brewed with orange blossom honey. The menu offers hyper-local pairings like lamb from Vly Farm in Stone Ridge and a rib-eye with a green peppercorn and brandy cream sauce. Chef Bart Cummings says his goal is to ensure that Rough Cut “is a place where people go to indulge.”

Keegan Ales was founded in 2003 thanks to owner Tommy Keegan’s need to build “a clubhouse that I would want to hang out in.” Today, Keegan’s beers are distributed from Washington, D.C., to the Canadian border. Keegan’s unpretentious atmosphere makes it a great place to kick back, and there’s always a good chance of running into Keegan and his brewers, who like to meet their customers. Keegan’s renowned Mother’s Milk Stout retains a hint of sharpness to bring its deep, rich character into stark relief. Keegan also offers enticing draft combinations born of clandestine experiments in the taproom. For instance, mixing Old Capitol (a flavorful blonde ale) with Mother’s Milk is called an “Old Mother,” while adding Old Capitol to Hurricane Kitty (considered the definitive Hudson Valley IPA) is dubbed “Florida.” Keegan packages the combos in a Chemistry Set gift box—a 12-pack featuring its four most popular beers, ready for mixing.

Although The Hop in Beacon only brews occasionally, it’s practically a church for craft brew fans, offering over 200 bottles and a regular rotation of 16 drafts, and hosting pilgrimage-worthy events. Last spring, for example, co-owners Matt Hutchins, Chris Kavanagh, and John Kelly paired 16 expertly curated taps with some of the Hudson Valley’s best local cuisine, and opened a separate room for hard-to-find retail beers. Then there’s the food. The Hop’s regular menu of small-plate, artisanal fare showcases local produce and grass-fed meats from Hemlock Hill Farm in Cortlandt Manor. Because he’s constantly being asked, “What’s really local?” Kelly stocks up on beer from locals like Crossroads and 2 Way, and brews collaboratively. The Hop’s most recent creation, with Rushing Duck Brewery in Chester, was Gimme Samoa That, a milky brown ale brewed with cocoa and toasted coconut, mimicking the flavors of the famous Girl Scout Cookie. This coming spring, The Hop’s longtime bar manager John-Anthony Gargiulo is set to open Hudson Valley Brewery in an 18,000-square-foot decommissioned factory in Beacon. If the new brewery is on par with The Hop, it’ll definitely be a game changer. 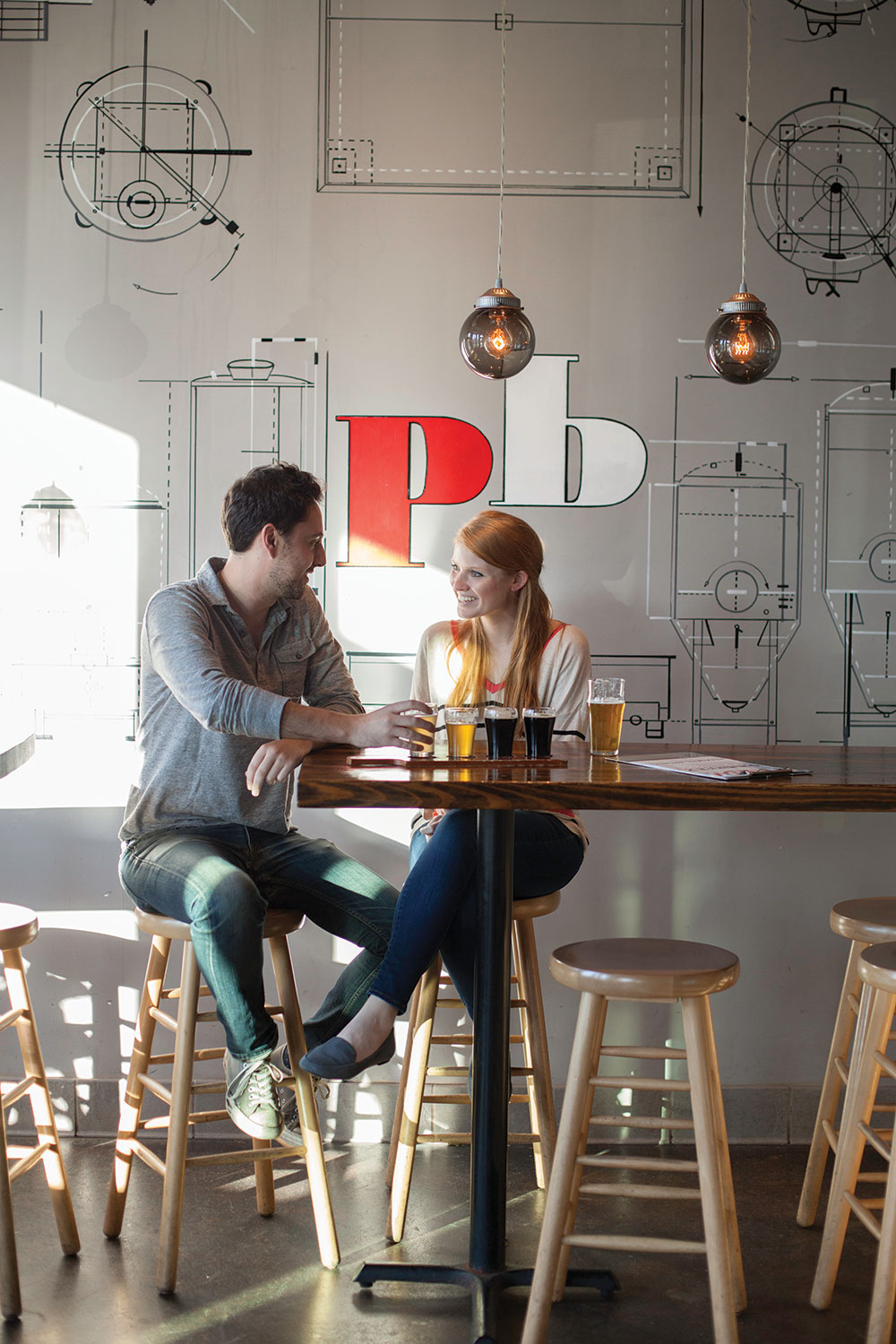 In 2013 Peekskill Brewery relocated to a newly built four-story monument to great beer just a short walk from the Metro-North station. Its lower-alcohol-by-volume Peekskill Sour, which is highlysessionable (in brewers’ parlance, that means the capacity to be consumed at the rate of about one beer per hour) helped put this place on the map. But Peekskill Brewery is becoming equally famous for its food, including its pork belly BLT, accompanied by fried avocado and Sriracha mayo. Try it with the Wakeup Call, a coffee-pale ale featuring Ahtanum hops and Colombian coffee beans from Coffee Lab Roasters in neighboring Tarrytown.