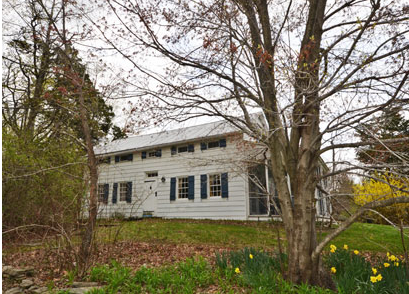 We found much to admire about this eyebrow cottage last week–price, look, location. Or at least we thought so. The listing caught the eye of friend of the Upstater blog, who did a little digging of her own about the property and reported back to us that the relatively modest price of the house is due to plans for a private racetrack at a nearby mansion–a project that has raised the ire of local residents and resulted in a lawsuit against the proposed racetrack’s owner.

There’s a group organized against the proposed racetrack, which would grace the land a New Jersey banking heir named Alam Wilzig if he ends up winning in the protracted battle, begun in 2006. And, yes, if a private racetrack suddenly springs up in this tiny country town, the tranquility factor will certainly be affected, even in those properties not directly bordering it.

We didn’t find the project having a huge impact on the listing prices of Taghkanic, N.Y. houses for sale, nor a higher number of homes on the market than in neighboring hamlets like Copake and Gallatin. Still, it adds another layer of worry if you’re thinking of investing here. If the racetrack succeeds, your eyebrow cottage’s value could be worth less than you paid. We have a call into the listing agent and will report back to our readers what he says.