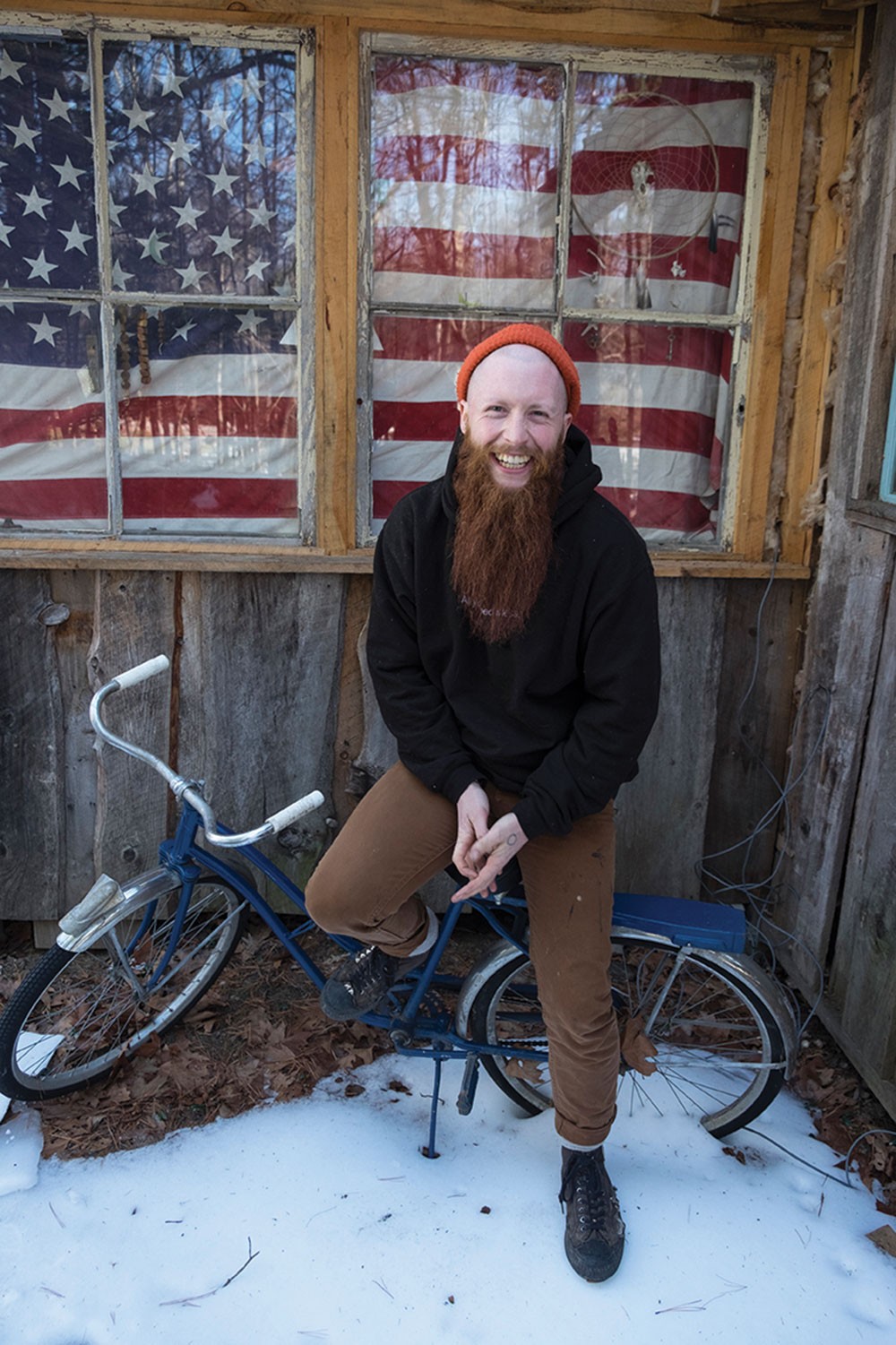 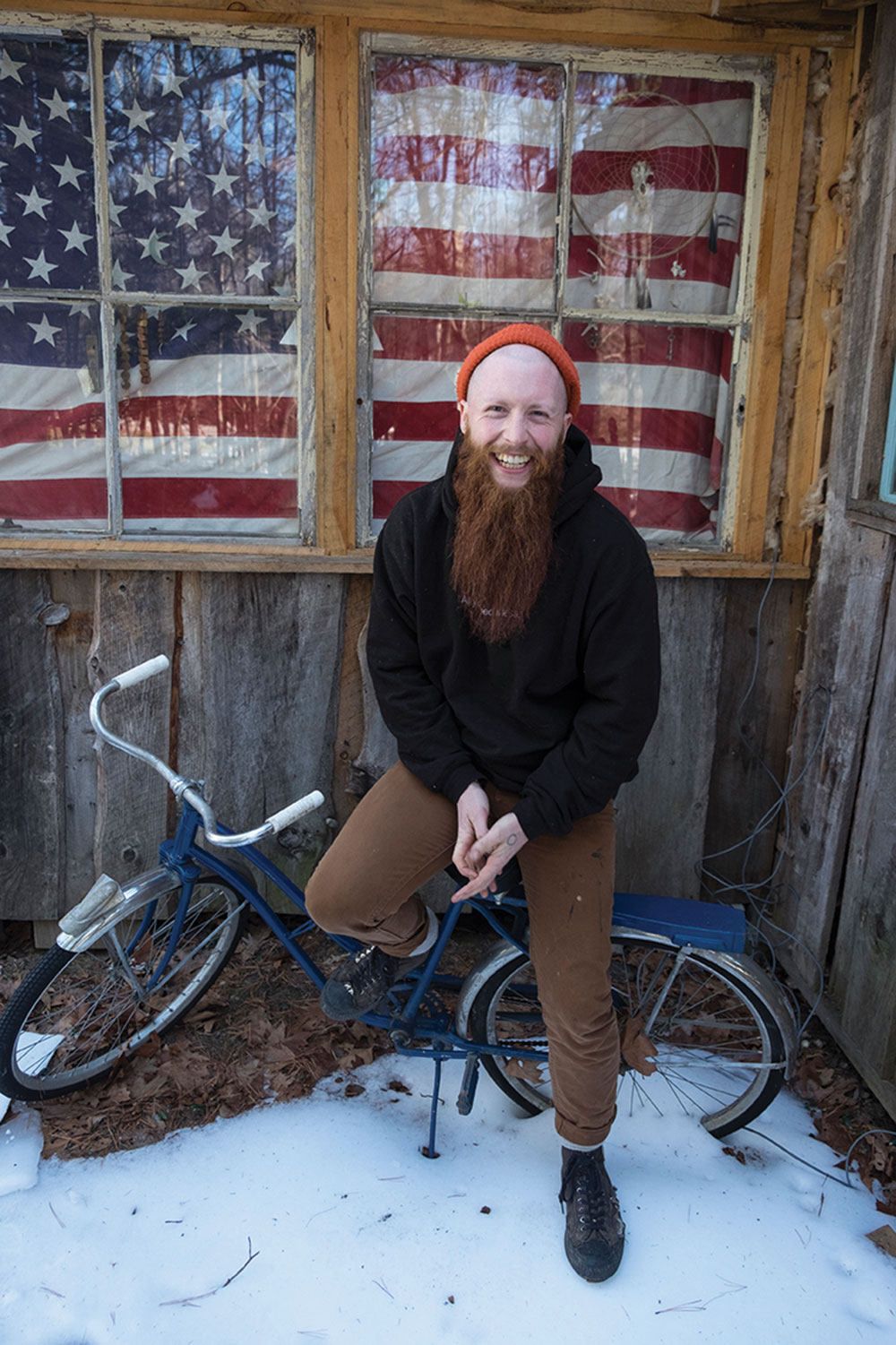 Will Lytle hasn’t seen his chin for two years. He stopped shaving while traveling with friends in backcountry Alaska, and now sports a wizardly bush of chest-length red beard. His head is shaved clean. The visual contrast of smooth pate and intricate textures is striking. He looks like a Will Lytle drawing.

Indeed, Lytle’s Thorneater Comics often feature a bearded voyager-wizard who lives in a tall narrow house in the woods. Approaching Lytle’s actual house for the first time, someone who reads Thorneater may feel a thrill of recognition, coupled with the sensation that she really should be arriving on owl’s back.

Lytle was born here. His parents came to Woodstock for the concert (though his father arrived three days late), loved the local vibe, and stayed. In 1971, they bought a small plot of land to homestead, building a house from hand-milled wood and growing most of their food. The youngest of three siblings, Lytle reports, “By the time I was born, they were good at it.”

They also encouraged young Will’s love of drawing. At Onteora High School, he joined the groundbreaking Indie film program, staying on after graduation to work with teen filmmakers. He attended New York’s School of Visual Arts for a year, but urban life and commercial art made him restless. He dropped out, alternating a day job at Woodstock’s Sunfrost farm stand with trips to New Zealand, Europe, and the American West, often hitchhiking or riding the rails. But the Hudson Valley always lured him back, and eventually he built his own house on a wooded corner of his parents’ land so he could live rent-free; he heats with wood and has no phone.

Inspired by Adrian Tomine’s guerrilla comics, Lytle started printing zine-style chapbooks in 2011, leaving free copies in locations ranging from local libraries to the beer fridge at Cumberland Farms (the franchise was not amused). For the past few years, he’s supported himself entirely with his art. Though he still prints hand-sewn chapbooks at “prices my peeps can afford,” he also drew a weekly Woodstock Times comic for two years, illustrated Clark Strand’s acclaimed book Waking Up to the Dark for Random House, and created logos and murals for Woodstock General Supply, Overlook Mountain Bikes, Phoenicia Flea, Ghent’s Ironwood Farm, Kingston’s Grounded Cafe and O+ Festival, and Paris’s Catskill-chic Colette boutique.

“So much of his work reflects the magical essence of the Catskills, and it is that magic that’s finding its way onto the pages of newspapers, books, and even the streets of Paris,” says Jackie Kellachan, owner of Woodstock’s Golden Notebook bookstore, which hosts launch parties for Lytle’s DIY publications. The New York Times recently described his work as “fairytale-like comics that evoke the dark humor of Maurice Sendak and Edward Gorey,” influences he cites alongside Animalia’s Graeme Base, filmmakers Stan Brakhage and Andrei Tarkovsky, The Lord of the Rings author J. R. R. Tolkien, and tarot artist Pamela Colman Smith. But like the granola served as “breakfast in bed for 400,000” at That Concert, the mix is homemade and uniquely his own. Grab a sample on his tumblr.