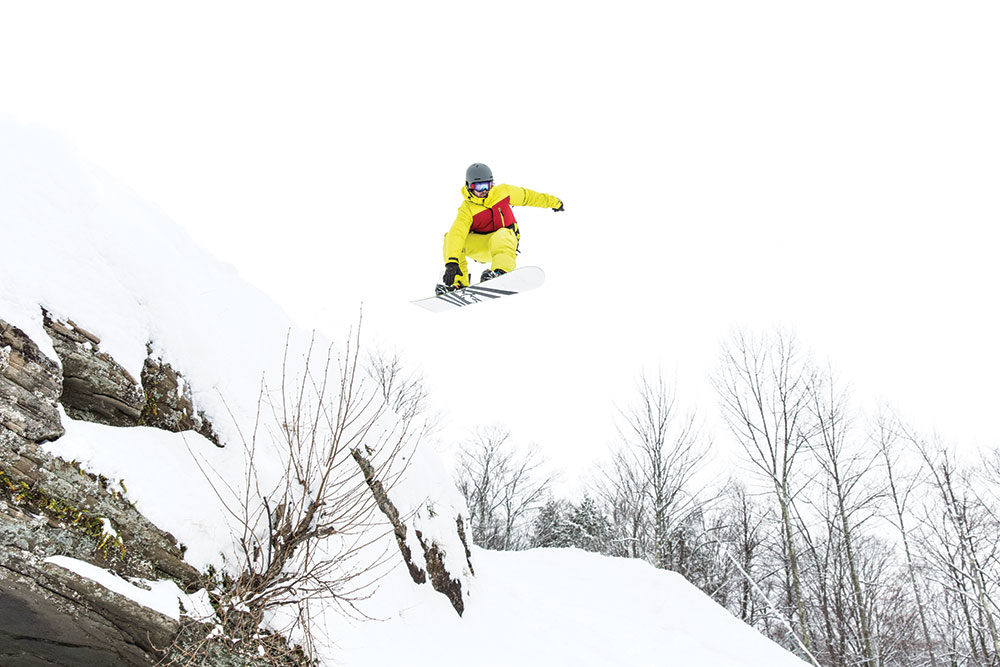 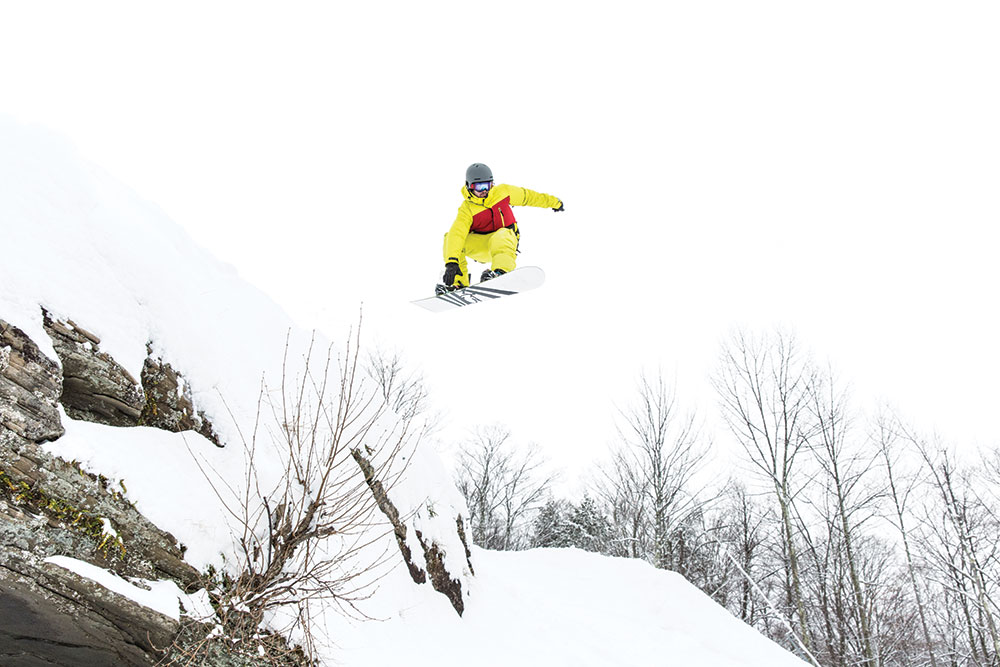 For New Yorkers with wheels, winter usually means a Rip Van Winkle-like slumber for the car, which gets a reprieve from weekend jaunts to the beach or the mountains. But our car gets its heaviest workout in winter. Every Friday night, from November through March, my family and I brave a sometimes slushy 140-mile run from Greenwich Village to Windham, the “gem of the Catskills,” as the village’s welcome sign reads.

When my wife Amy and I, both native New Englanders, arrived in New York City in 2010, we found ourselves yearning for easily accessible, but challenging, downhill terrain and a steeple-topped village, generously appointed with bars and restaurants—just like the ones nestled along New England byways that we knew as kids.

We were unsure at first. Like the rest of the Catskills villages, Windham lost its economic vitality in the ’70s, thanks to the three As: air-conditioning, assimilation, and airplanes; plus, in the 1980s and ’90s, the mountain cycled through a series of owners, and was due for a revamp.

But we needed a weekend outlet from our tiny city apartment, so we began sampling Windham’s lodging stock: Albergo Allegria, a B&B in a 1892 Queen Anne Victorian; Hotel Vienna, with its heated pool; and the Winwood Inn on Main Street. Our verdict: Windham wasn’t exactly the Rockies, but it had plenty going for it.

Then, in August 2011, as we looked for a house to buy, Hurricane-turned-Tropical-Storm Irene rolled into town after cutting a swath of devastation along the East Coast, showing little mercy. The Batavia Kill, which courses along Windham’s Main Street, flooded Windham with several feet of brick-red water. Irene inflicted even more severe damage on nearby Prattsville and Hendersonville.

That fall, instead of tourists arriving for the glorious foliage, the National Guard came to patrol Windham’s roads. Catskills tourism faced an existential threat. Recovery required an all-hands effort. Windham Mountain’s new general manager, Chip Seamans, who had been hired away from a Lake Tahoe resort to upgrade the ski area’s operations, arrived early after seeing a school bus float through Windham on CNN. He began work shoveling mud out of the main lodge.

Thankfully, the 2011-2012 ski season began on schedule, and so did our new life as Windham weekenders. We found a large, new, shingled home with a perfect view of the mountain, constructed as a spec house by local builder Jim Miltenberger, owner of Hickory Hill Builders. While other potential buyers were put off by the images on CNN of Irene’s destruction, we were confident in Jim’s craftsmanship and the home’s sturdy concrete foundation to withstand future storms. We closed just before Christmas in 2011, and bought our first season tickets. 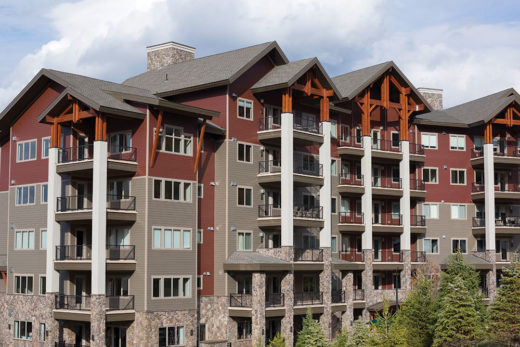 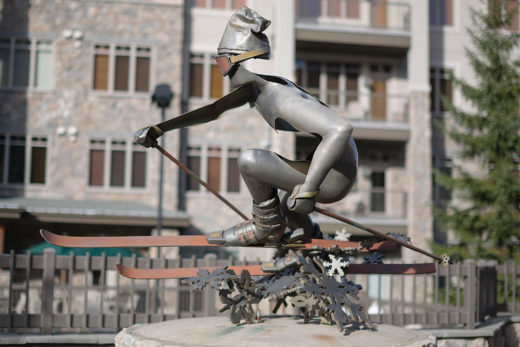 The 2016-17 season is our fifth in our bunk bed-filled lodge, decorated with vintage ski posters, a deer antler chandelier, and rustic décor. Our house is filling again with our friends and their families. Frost is covering the front yard, our firewood rack is stocked anew, the jigsaw puzzles are ready, and untried chili recipes await testing.

The Farmer’s Almanac predicts an abundant winter, and we’re due for one. Mother Nature was stingy last year, dropping only 10 inches of natural snow on Windham, which canceled the kids’ sledding league and kept tour buses away.

But it’s hard to shut down skiing completely at Windham, even without real snowfall. Snowmaking engineers, employing a fleet of compressors and miles of piping, start firing their guns as soon as the temperature dips below freezing, blanketing the main trails with a base of packed powder. The mountain strives to open its lifts for Thanksgiving, but even Christmas week can be fickle. While an early blizzard can transform Main Street into an American version of Switzerland’s St. Moritz, a dry spell leaves the area brown and forlorn. 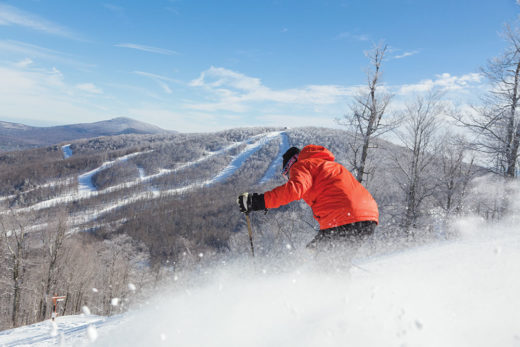 At Windham, December is for hardy skiers who don’t mind dodging a few rocks. Windham’s peak time is January and February, when all 54 trails and 285 skiable acres are open. But when conditions are peak, the crowds come, so get to the slopes early, before the buses arrive and tourists fill the lifts around 10am. That gives you time to lay down the first tracks and explore the mountain.

Windham Mountain Outfitters stays open until 10:30pm on Fridays to set skiers up with gear. Proprietor Nick Bove, who developed the new—and much-loved—Windham Path walking trail, has earned accolades for nurturing Windham’s reputation for four-season recreation, and he’s always happy to share his knowledge with skiers.

What’s most striking about Windham is its 72,000-square-foot base lodge, which offers the sheen of a Western ski resort with comparatively lower-priced tickets. The lodge offers some amenities that are inconsistent with the Catskills’ spartan character, like a sushi restaurant; Seasons, a full-service bar; and European-trained master boot-fitter Marc Stewart’s emporium, The Boot Lab.

Early birds should head to A-lift, the main high-speed quad of the mountain’s 12 lifts, which whisks skiers to Windham’s peak at 3,100 feet in six minutes. Those first, solitary runs unfold over acres of fresh “corduroy” or “hero” snow, courtesy of the overnight snow groomers.

Windham’s trails each begin with the letter W. The intermediate top-to-bottom slopes—Whistler, Wiseacres, and Warpath—snake below A-lift. At G-lift, the trails are World Cup (intermediate), Wanderer (an easy cruiser), and three “black diamond” experts: Why Not, a fast cruiser; steep and narrow Wing’n It, requiring some technical navigation; and Wicked, an exposed trail that can turn icy when the gusts blow away the fresh cover.

B-lift’s slow double chairlift takes skiers to Windham’s “double black diamond” expert terrain. The panorama of the northern Catskills, seen from the top of steep, wide Wolverine, is unmatched. Wheelchair rattles the knees. Wedel has the mountain’s most unnerving sheer drop. Upper Wipeout, off the beaten path and serene, is my favorite. Its sweat-inducing traverse across the West Peak ridgeline rewards the skier with a powdery Vermont-like descent through a maze of moguls (ski-speak for bumps) and trees. 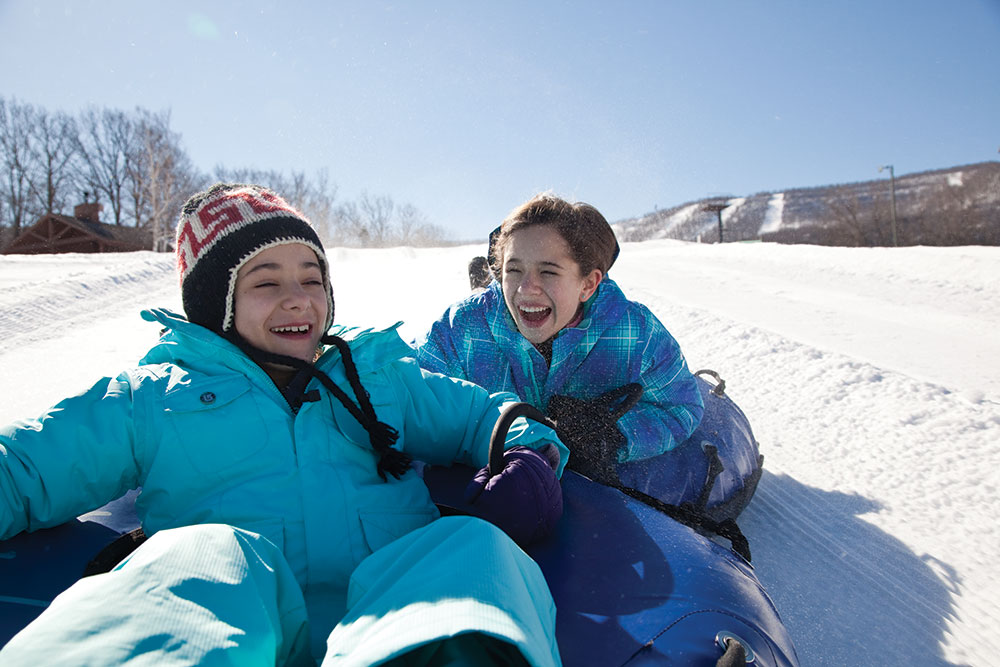 Windham’s Snow School has a package for every age, starting with four-year-olds. The daylong, instructor-led program for kids, with lunch provided, introduces them to skiing via the “magic carpet” lifts. After graduating from ski school on Whisper Run, kids can be taken to K-lift, a triple chair that moves, tortoise-like, over tiny Willpower slope. Next, there’s D-lift, where What’s Next and White Way careen past stately homes. Finally, C-lift brings skiers to wide Wonderama and its sidekick, Lower Wipeout, which courses alongside exquisite timber chalets. If you’re like me when I first guided my kids down those runs, you won’t want to leave. You’ll think: next year, a seasonal rental; the year after that, a purchase.

Alpine Spa, a new, standalone outpost astride the beginner slope, offers an après-ski respite with yoga classes, steam room, and sauna; its most popular offerings include a 60-minute Deep Tissue Massage ($115) and Alpine Custom Facial ($100).
To sap kids’ remaining stamina and guarantee a good night’s sleep, try Windham Adventure Park, across the road from the mountain, open until 8pm on weekends. It’s warm inside the utilitarian lodge (pro tip: Bring a flask of bourbon to spike your cocoa), so you can comfortably watch the kids hurtling over the five-lane tubing track, ice skating, zip-line riding, or racing miniature snow mobiles. 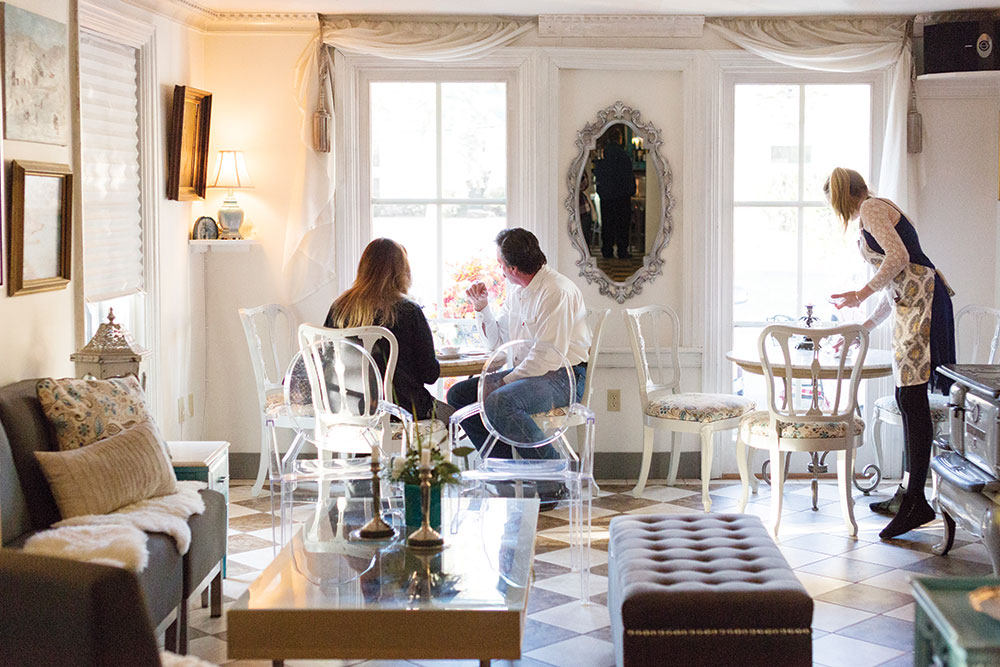 When Irene hit, the Catskill Mountain Country Store, on Route 23, found itself buried in mud, but owner Drew Shuster rebuilt and bounced back, even opening a second store in nearby Tannersville. This hitching post-style place features a creative kitchen run by Shuster’s wife Natasha, a Culinary Institute of America-trained chef. The breakfast menu includes exotic waffle, pancake, French toast, and omelet dishes.

Kids explore the aisles of toys and games and compete in the rubber-band-gun shooting gallery out back; adults lose themselves amid the wide assortment of homemade jams, jellies, dressings, and sauces. In our house, we devour the Country Store’s baguettes, doughnuts, and pies, and pour its hot sauce on almost everything.

At the South Street/Route 23 intersection, behind a barn door, is Chicken Run. Its owner, Polish émigré Adam Okonski, a former Manhattan real estate broker, left New York after 9/11 to become a custom home builder, but has made his mark in the Catskills as a purveyor of food and family-style fun. “The town needed a friendly gathering spot with affordable food and home-cooked meals,” he says.

Named for the animated kids’ movie, Chicken Run serves up to 600 meals a night, including freshly cut steaks and dry-rubbed rotisserie chicken. Stay for live local bands, make-your-own-sundaes, or the horseshoe pit, bonfire, and s’mores on the banks of Batavia Kill. Bonus for sports fans: Flat-screen TVs along the walls mean you don’t have to miss any games during your ski weekend.

In town, Mill Rock, an open-kitchen Northern Italian-style restaurant, is warmed by its wood-fired oven, which turns out thin-crust pies that rival Greenwich Village’s best. Mill Rock fills quickly on weekends, but owner Rocky DiPippa will uncork a bottle of Chianti for you while you wait for a table. Split a pizza for an appetizer, but save room for pasta on a plate so large you’ll have to take some home.

All genuine ski towns have their own brewery. Windham’s is Cave Mountain Brewing Company, named for the mountain’s peak, offering seasonal specialties, plus six standard brews available in a $9 flight: Hefewizen, Belgian White, Sweet Oatmeal Stout, American IPA, West Coast Red, and Blueberry White. Pub fare helps soak up the suds. If you like what you drink, take home a growler of your favorite brew.

Winwood Inn, on Route 23, got a facelift last season, lending its façade a Rockies allure and warming up its lobby with a cozy new gas fireplace surrounded by comfy plush sofas. Winwood adjoins Rock’n Mexicana, where fajitas sizzle and margaritas flow freely. 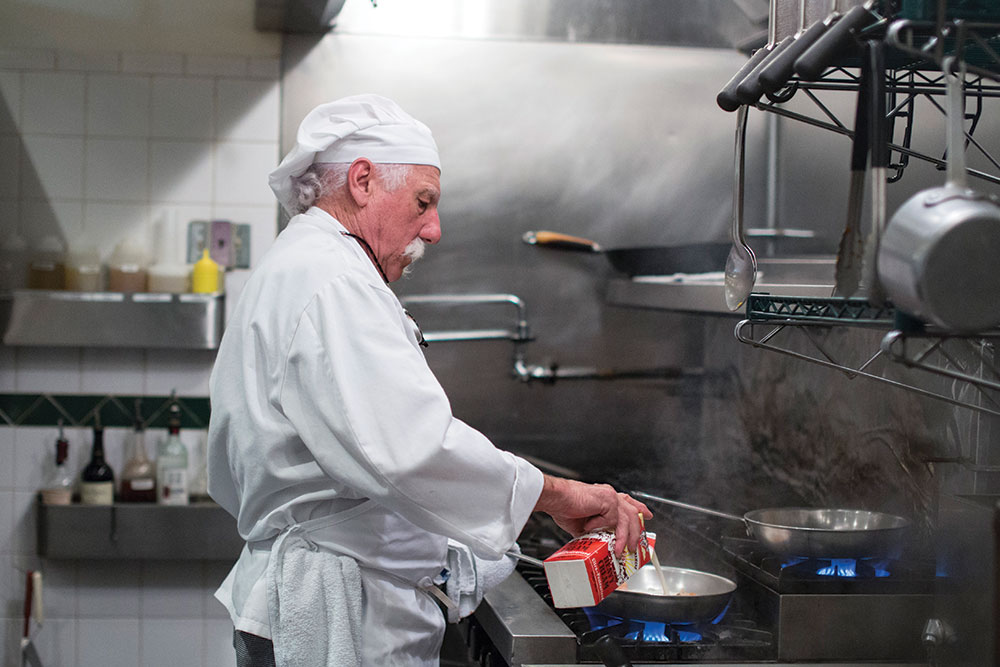 A Town for All Seasons

The Catskills teem with hiking trails, and Windham Mountain opened a bike park last year, but Windham Path, a 1.5-mile walking trail on Route 23, offers an easy stroll in all seasons past covered bridges and fields of snow or wildflowers. (In future, the path will expand to link Windham to Hensonville and Maplecrest.)

As you follow Windham Path, breathing unfettered Catskills air, remember that, in April, fly fishing season begins in earnest, and Windham’s two golf courses, Windham Country Club and Christman’s, reopen. Can you make it back?

I find it hard not to battle melancholy as my family and I descend Route 23 on our way back to Manhattan. Once again, I’ll have to give up my Gore-Tex gear for five days at work in a suit and tie. In the meantime, though, I try to savor my final moments in the mountains.

The timeworn motels and shuttered restaurants along the road heading down the mountain remind me of former Catskills resorts—like Grossinger’s and Kutsher’s—whose heydays are immortalized on YouTube but now stand desolate and overgrown. That could have been Windham, but it isn’t. Somehow, thanks to the caring people who live there, and a bit of luck, the village of Windham remains alive and resilient, miraculously saved from both the march of time and Mother Nature’s ravages.