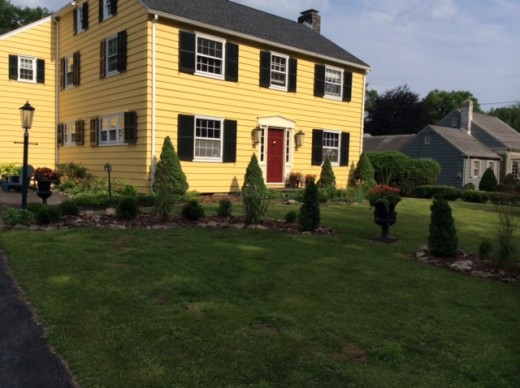 The exterior of our current 1930s colonial revival.

Before everyone begins to think my summer cold has literally gone to my head, I should probably elaborate on my point sooner rather than later. The simple, non-complicated response is there are two homes for sale in my neighborhood, each with distinct appeal, erected in different eras, with abounding charm and scenic landscapes. As I mentioned in last week’s article, my neighborhood features eight homes with sprawling lawns and private yards. A very pretty neighborhood tucked away, yet within walking distance to restaurants, the Farmer’s Market and musical performance venues. It’s a quiet lane which slightly twists, a lane reminiscent of Stamford Connecticut or White Plains, NY. However, the caveat to this conversation are the variables in price points (at least for now). 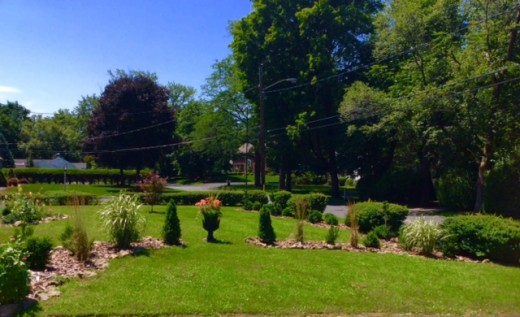 But first, a brief History (and I do mean brief): in 1848, Valentine Burgevin, a trained florist, emigrated to Kingston, NY from Orleans France. Within his lifetime, Valentine created a floral business, once noted as one of the most successful in New York State. At the height of the Burgevin Family’s success, their business consisted of over thirty Greenhouses and test gardens erected along and adjacent to Pell’s Lane. Following Valentine’s death in 1900, as a memoriam from the City of Kingston, Pell’s Lane was renamed Burgevin Street. Shortly thereafter Valentine’s heirs were successful in receiving zoning approval to have Burgevin Street divided into parcels for development. This planned development, unique in its time, featured substantial landscaped plots. The development of Burgevin Street continued throughout the twentieth century. 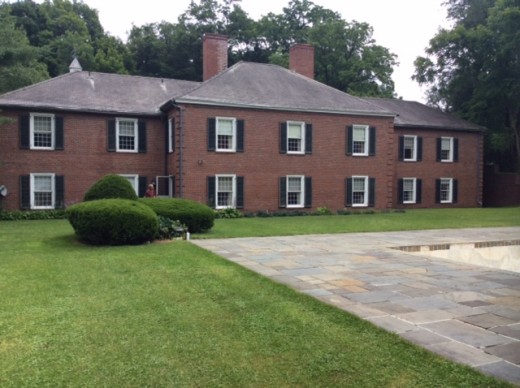 The impressive back exterior facade, with blue stone terrace and cement pool.

The Georgian Manse was erected in 1975 by one of Kingston’s more affluent familys. The home was designed by the internationally recognized Architecture firm Royal Barry Willis. Houses designed by Royal Barry Willis in Edina, MN, Florida, Canada and throughout New England still fetch premium prices. The motto of the Willis Firm was, “no stock plans.” As an interior designer there are certain structural components one searches for in both the exterior and interior of a home. 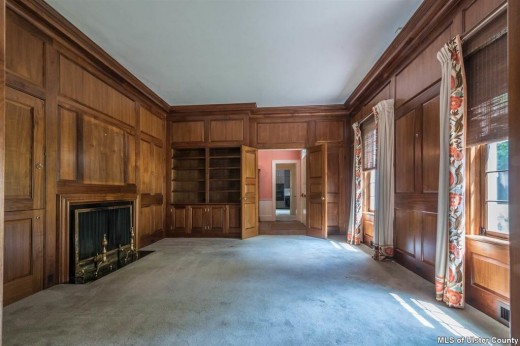 The library’s design features the finest in interior detailing

Stepping into 75 Burgevin Street can only be compared to winning the blue light special – immediately the bells and whistles are sounded. Frankly, in this home no detail has been overlooked: a raised panel library (with concealed wet bar), three stepped cornices in the main floor public rooms, a living room fireplace adorned with fluted pilasters , Baldwin Brass 18th century reproduction door hinges, locks, door knobs and window locks, dignified lighting fixtures, and eight-over-eight windows. A stunning Master Suite features: expansive closets, sitting area, his and her baths as well as an adjacent study. Included in the service wing are: maid’s quarters, cloak room, triple pantry closets, deluxe gourmet kitchen, and butler’s pantry. The lower level is designed to offer luxurious guest accommodations while simultaneously providing entertaining spaces for poolside events. A large sitting area with fireplace with adjacent service kitchen assures the success of events in any season. 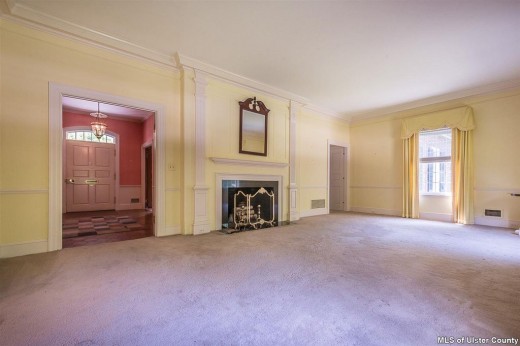 Fluted pilasters accentuate, while visibly adorning the living room fireplace. The perfect space for a Contemporary work of art.

Though expansive, the precise beauty of this home conveys a livable grandeur. Antiques paired with art and contemporary furnishings would glow inside this home’s detailed interior. Massive Georgian styled brick fencing, a blue stone terrace and cement pool on the home’s exterior easily create a seasonal oasis. To replicate this home in today’s market – given the intricate detailing of every room, custom finishes and quality of materials utilized – would total in the multiple millions. The interior decoration of the home was initially commissioned through the McMillen Design Firm in Manhattan (McMillen is America’s oldest premier interior design company). Obviously, at the $595 price point this home does require decorative updating. The bathrooms, kitchen, service areas, carpeting and interior paint all require modern upgrades. It’s by no means an inexpensive task, but certainly not one that would break the bank of those accustomed to shopping for housing at a higher price point. Essentially this property is an executive manse, requiring a decorative cosmetic brush, in a secluded neighborhood listed for a fraction of the cost of a 540 square foot New York City apartment. Royal Barry Willis homes are touted as offering the finest in construction and materials, a caveat worthy of consideration with this home. 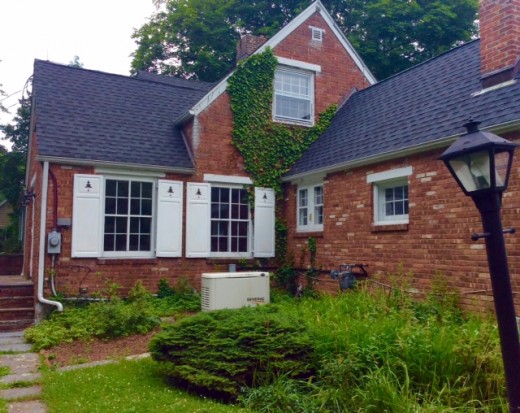 Built in the 1930’s Cape Cod style, this home is more indicative of an English Country Cottage than an American Classic. This particular dwelling has un-measurable charm and appeal. The detailing of the oversized windows, French doors, paneled living room fireplace, dining room corner cupboard, bluestone terrace and screened porch are inescapably appealing. The ground’s mature plantings afford privacy as well as possibilities for an herb, vegetable or cutting gardens. Perched on the curve of Burgevin Street, this home has the prevailing sense of a tucked away nest. Each time I have viewed this home my enthusiasm for its potential has increased. 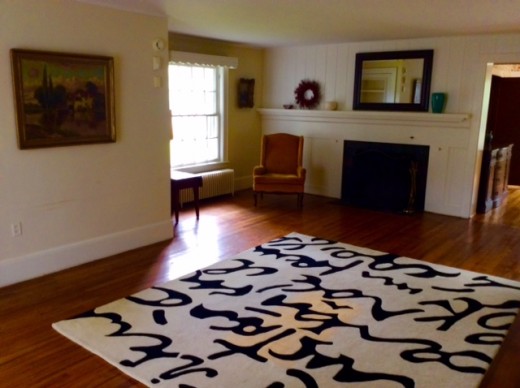 Similar to the Georgian Manse, this home requires decorative enhancements. Again the conservative price point easily affords any desired renovations. While the Manse sparkles with entertaining potential, the Cottage whispers, “would you like an oatmeal raisin cookie?” If like me, you are a 1930s – 1940s film enthusiast then this is the home for you. The second floor is mindful of the set for the 1947 film The Ghost and Mrs Muir. Deep window dormers and intimate spaces harken to a former time. Personally, as a designer, I visualize the second floor being transformed into a master suite with double sized bedroom, abutting sitting room and master bath. The kitchen along with the current family room provide ample sitting and dining in every season. The first floor master bedroom, is an ideal private suite for guests. 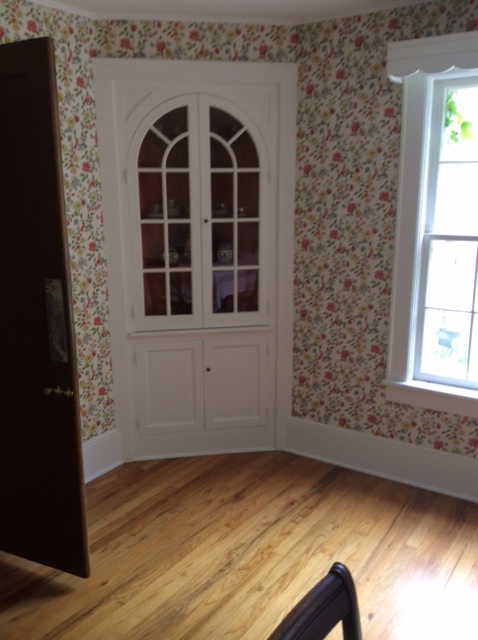 When I view a home, I first catalogue: architectural detailing, number/width of windows, and the availability of interior and exterior entertaining spaces. Then I calculate how these features may be incorporated into the home’s renovation. A family home for several generations, One Burgevin street is the epitome of a city retreat. During dual visits to this listing I have become enamored with its unlimited possibilities, for family or single living. The exterior facade, terrace and grounds seem cast out of the pages of an Agatha Christy novel. With just a slight nudge into modernity, sublime perfection could be achieved with this property. 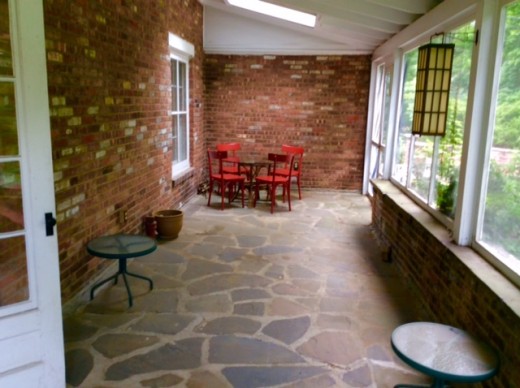 The home’s bluestone porch, with its companion terrace conjures visions of seasonal entertaining at its best.

French architect Le Corbussier stated, “the home is the treasure chest for living.” In a quiet neighborhood, within the accessible boundaries of a City, are two uniquely individual homes. Both homes radiate appeal, comfort, spaciousness and graciousness for living. They’re distinctive homes that are nestled by trees along a meandering lane. When Gary and I first moved to our neighborhood I breathed a sigh of relief to have found a city dwelling whose landscape was reminiscent of its country cousins. Within the first two weeks of residency in our neighborhood one neighbor delivered a bottle of Pouilly Fusse (my favorite wine), another delivered her famous carrot cake while yet another, a local restauranteur, treated us to a gourmet dinner in his restaurant. Finding a house that meets budgetary and spatial requirements is a mandate for any home search. When these mandates are found within an amazing neighborhood, the house becomes a home. “Won’t you be my neighbor?”