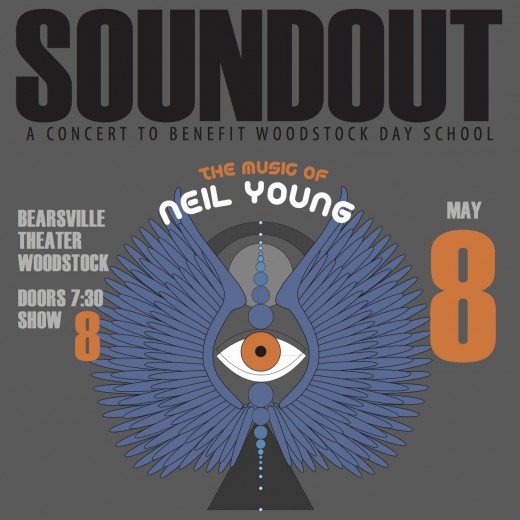 On Friday, May 8th there’s going to be a Woodstock Soundout celebrating the music of Neil Young, and it’s going to be awesome in the way that all things like this Upstate are awesome.

In short: you ought to go. A.C. Newman, Marco Benevento, Nicole Atkins, Simi Stone, Happy Traum, and a dozen others playing Neil Young songs at the Bearsville Theater in Woodstock? Yes. It’s going to be very Upstate-y.

Upstate is singular, but it’s not entirely unique. It’s a nature-rich, historical, economically diverse region outside of a major metropolitan center. These little hotspots happen all over the country. They tend to be less expensive than the city they’re near, so artists and creative people and young professional families tend to flock to them.

These places often get compared to the metropolitan center nearby (see articles with titles like, “Is the Hudson Valley the new Brooklyn?”), which isn’t fair or accurate, because these places have always existed as not that place. They’ve never existed to compete with those places. In other words, while Kingston used to be the capital of New York State, it was never meant to compete with New York City. Its strength was (and is) that it was, in fact, not New York City.

So what do we do in places like Not New York City (or Not Chicago. Or Not LA)? Lots of things. Often, creative people come together to do creative things, sometimes to support their communities, and sometimes just for the sheer pleasure of doing them. This is not different than anywhere else.

But this is not anywhere else. It’s Woodstock, for god’s sake. This Woodstock Soundout celebrating the music of Neil Young on Friday isn’t your cousin Joey playing Old Man over and over at the local Irish place. It’s A.C. Newman from the New Pornographers. And Marco Benevento. And Simi Stone. And Happy Traum, who was a part of the original Woodstock Soundouts of the late ‘60s, which provided the spark and template for the iconic 1969 Woodstock Festival.

If you’re a world-famous musician, you go to New York City to work. But you go to Woodstock because you love to play.* Proceeds from The Woodstock Soundout on Friday benefit the Woodstock Day School, which is great. But you should go because it’s going to be awesome in the way that all things like this Upstate are awesome. A.C. Newman and fifteen of his friends playing Neil Young songs? Pure pleasure.

Here’s to that. See you on Friday!