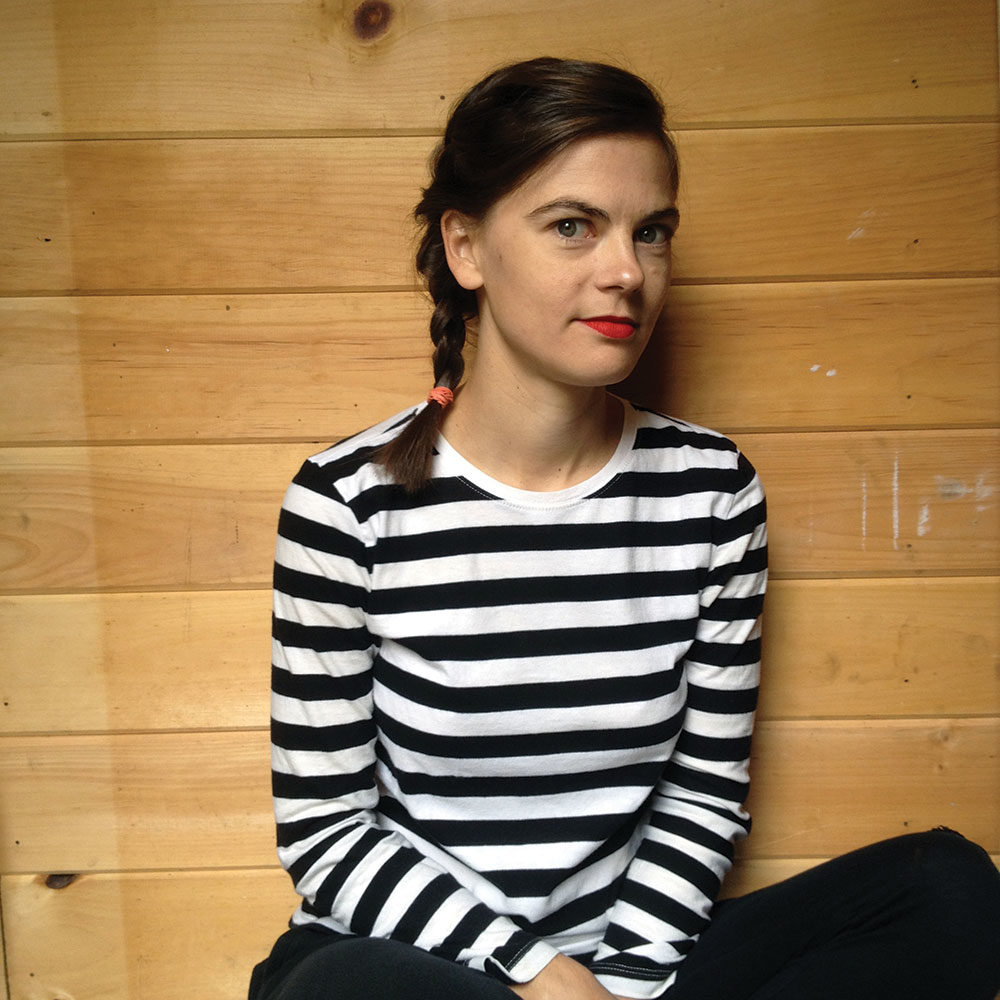 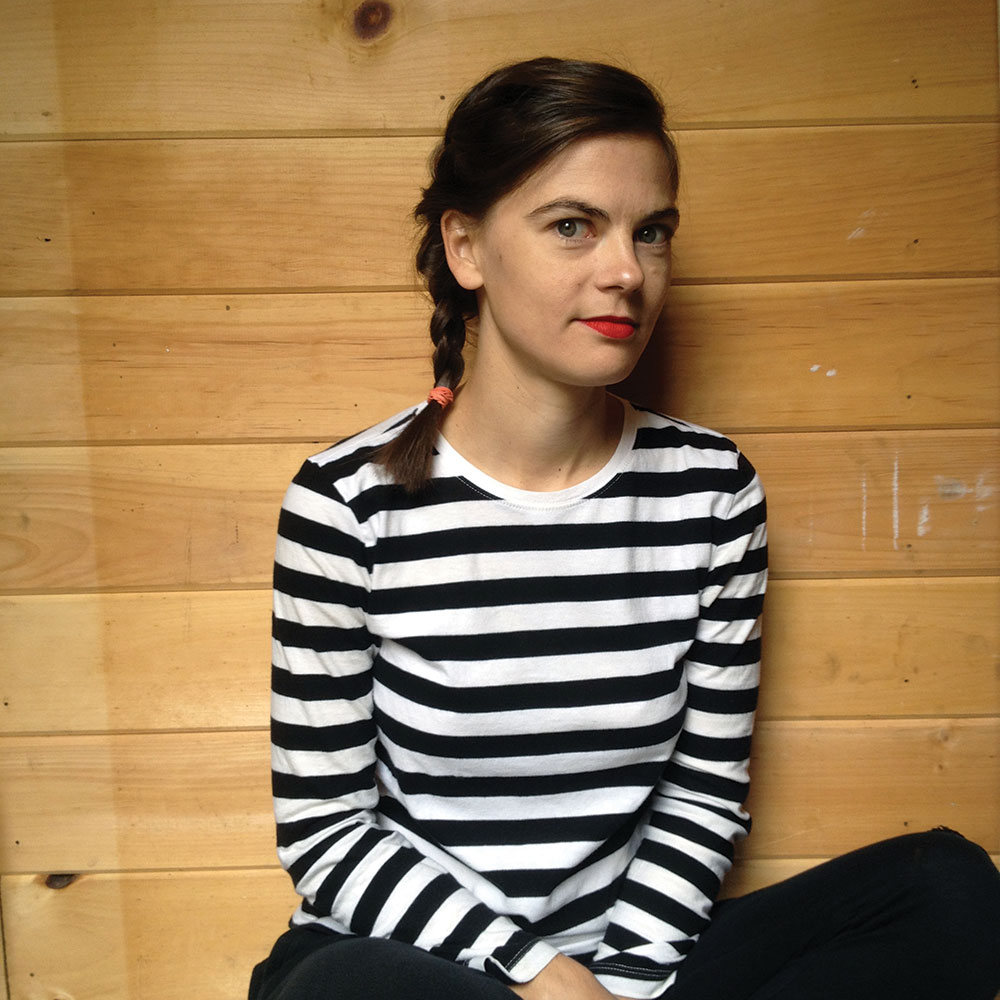 “I really love words,” says artist Zoe Bellot. A native Parisian who was drawn to the US while studying American literature at the Sorbonne, she has made art objects incorporating language since childhood. But not until spending a year in New York City doing research for a Ph.D. did she decide to drop out of academia and become a full-time artist. So in 2007, when she was 25, Bellot enrolled on scholarship in a three-year program in painting and drawing at the National Academy School, located across Fifth Avenue from the Guggenheim Museum.

Simultaneously, she also began assembling kinetic music boxes containing miniature worlds, using old suitcases and other materials she found in dumpsters; she taught herself how to automate the music boxes by learning how to build an electrical circuit on the internet.

But even as Bellot’s creativity blossomed, life was tough, with the rent on her Harlem apartment consuming half of her $1,000-a-month budget. “There were days I had to be resourceful and eat pasta with olive oil,” she recalls. She was too poor to afford to buy the plates to learn printing; instead, she dismantled her bookshelf, using the wood to carve the blocks for a book piece called Lettres. Each page is printed with the portrait and initials of one of 26 authors whose names were derived from her books strewn across her floor.

But the need to be resourceful was a blessing. “I did my first woodcuts out of necessity, but it’s a medium I really love,” she says. “It’s very direct, and there’s something sculptural about the carving.”

Today, Bellot divides her time between the very same apartment in Harlem and a rental house and studio garage in Hudson. She says the need to be resourceful was a blessing. “I did my first woodcuts out of necessity, but it’s a medium I really love,” she says. “It’s very direct, and there’s something sculptural about the carving.”

After graduating in 2011, she began teaching French at a private school in Tribeca, where she created a blog called Word of the Day, posting a daily word, along with its definition, an illustration, a sentence using it in context, and an audio link.

Counted among Bellot’s influences are her grandmother, who kept a journal with funny words, and writers whose style tends toward “straightforwardness, simplicity, and economy,” she says, including Emily Dickinson, Cormac McCarthy, Ernest Hemingway, J. M. Coetzee, and Jim Harrison.

But it’s the structure of language itself, along with puzzles, games, and puns, that mostly informs Bellot’s art. “I use grammar in my work,” she says, “though you don’t have to know that to appreciate it.” The structure of the box containing her book-poem, 3 East 3rd, for instance, forms a kind of syntax, she says. The piece, which was inspired by a New York City hostel with tiny rooms, consists of a triangular box fitted with numerous rectangular blocks printed with fragments of overheard conversation that can be multitudinously arranged. “There’s always a system that determines which form the word takes.”

Bellot says she’s found that in discovering “the English version of myself,” she can “stop looking for equivalents of my personality in French.” Instead, she says, she likes to use her English version “as a free card. You can be more yourself [in a new language] than back home, because you discover different parts of yourself.”

Bellot began traveling from Harlem to Hudson in 2012. These days, she and her boyfriend, architect Scott Benedict, head upstate most weekends and throughout the summer to her garage studio, where she makes woodcut and stencil prints from a press that was originally designed for printing linens.

Last fall, she served as artist-in-residence at the Hudson Opera House, where she is still working on turning two abandoned pianos into an artwork. While one side of each instrument will be converted into a bar, the other will display a series of shadow boxes whose content relates to Offenbach’s opera Tales of Hoffman and the history of the Opera House, including its multiple former uses as well as famous visitors. Bellot plans to finish the work this spring.

Another current project is Horoscope, a website page that features a new pairing of a word and artwork every two weeks. The results are both cryptic and contradictory. “Voyage,” for instance, is accompanied by a painted wooden box in which the outline of a map of Manhattan is filled with red shapes fashioned out of cardboard. A blue wooden car is positioned on the yellow ground, and the digital photograph is captioned “Parler anglais? Infinitif. Parlez francais, definitif.”

Bellot’s dream project is still in the planning stages: constructing an amusement park themed around language. “I want to create a sensation, to do some performance art that’s of the moment, to give people an experience,” she says, noting that she’s searching for a piece of land. The first ride would be a train related to punctuation, to be called “Comma, or Coma.” “It would be motorized and made out of found objects,” she says. “It would be scary, giving people a good dose of adrenaline—an alternative to drugs.” 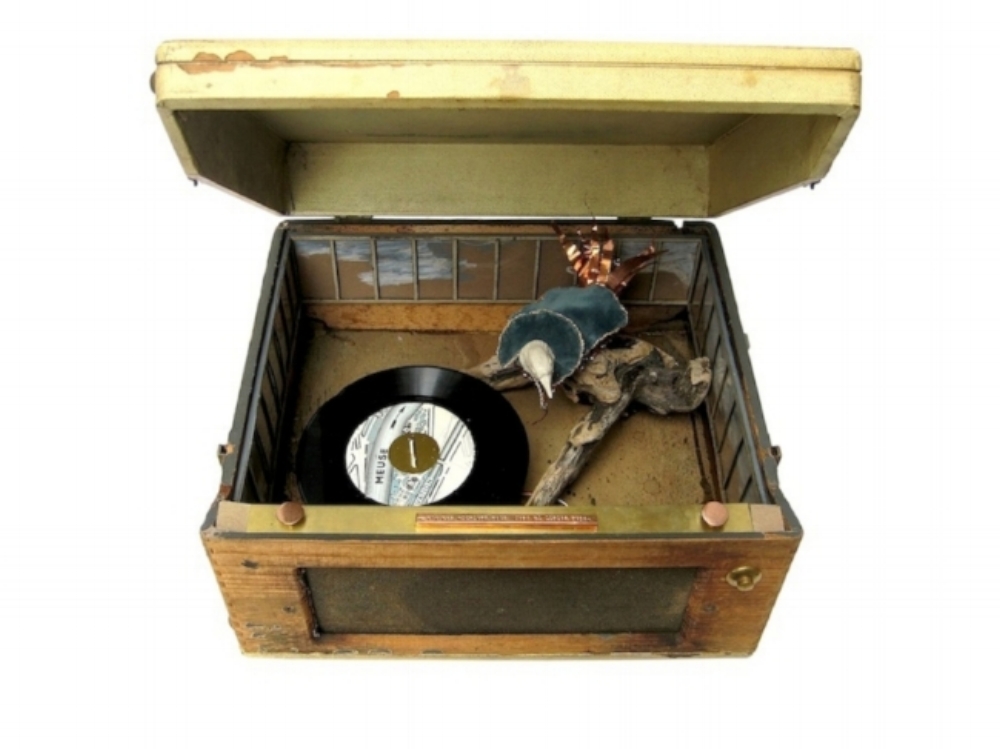 In Bird, the first in Zoe Bellot’s “Bon Voyage” series—a title suggesting artifacts associated with memory, adventure, and departures—a clay bird poised on a branch inside a battered record-player case twirls around when you turn on a switch; hit the second switch, and Marvin Gaye’s “How Sweet It Is” plays. The interior walls of the case are painted to resemble a skyscape seen through rows of windows, and a 45 on the imaginary turntable is stationary. As an homage to Edgar Allen Poe’s poem “The Raven,” the piece is rife with irony and pop dissonance, even as the worn wooden case, complete with lid, suggests the passage of time and invites portability—baggage bringing spiritual solace on the journey of life. 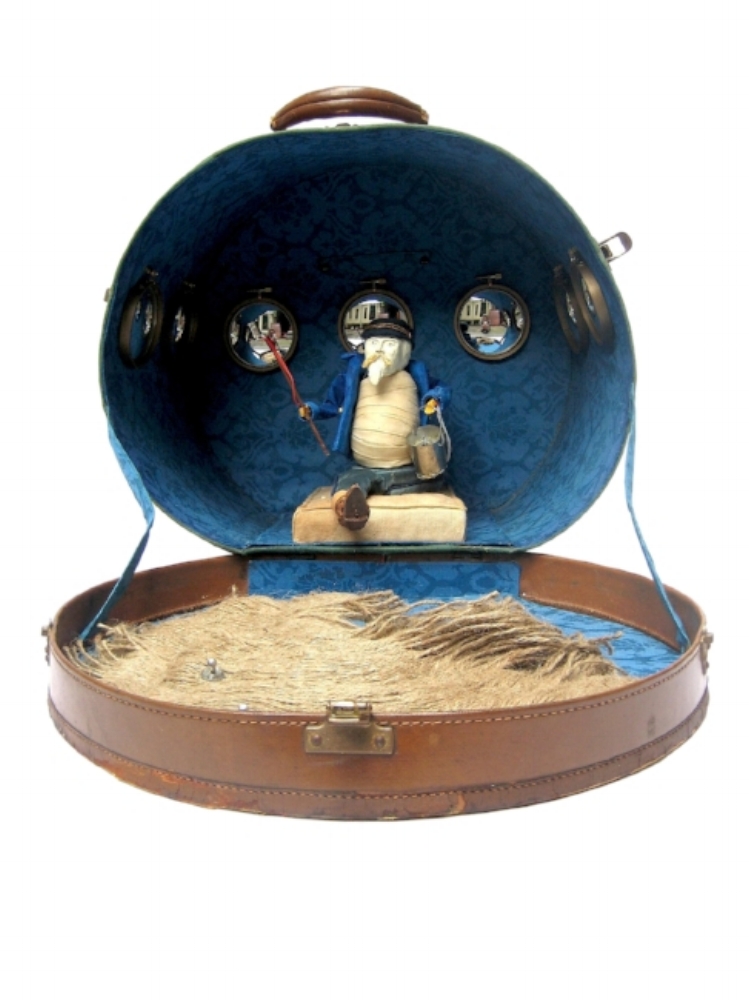 Sailor, which is an homage to Hemingway’s The Old Man and the Sea, consists of a bearded figurine wearing a cap and holding a bucket and a stick sitting on a miniature mattress inside a leather hatbox lined with midnight-blue fabric, and adorned with a series of round mirrors and a piece of burlap resembling flotsam, or possibly a fisherman’s net. The piece suggests not so much a nautical milieu as a child’s dream of it. The sailor’s stick lights up as he spins on the mattress to the tune of the Pointer Sisters’ synth-driven, New Wave R&B hit “I’m So Excited.”