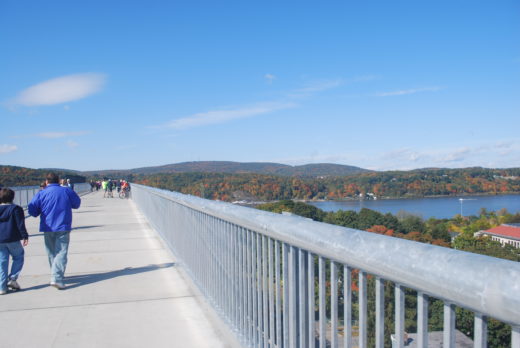 Walkway Over the Hudson via Wikipedia

You might want to invest in new hiking shoes for this one. On January 10, Governor Cuomo announced the launch of a $200 million project to create a 750-mile single trail connecting Manhattan with the NY/Canadian border. Follow Cuomo’s tweets about the Empire State Trail for updates, but we gleaned from a recent article in 6sqft.com that the project would “build upon two existing but incomplete trailways—the Hudson River Valley Greenway (now 50 percent complete) and the Erie Canalway (now 80 percent complete)—and essentially run from Battery Park City all the way up to the Canadian border in the North Country, and from Albany to Buffalo.” The trail will be sure to offer terrific views of the Hudson Valley. The Walkway Over the Hudson in Poughkeepsie, Olana State Historic Site in Hudson, and the Martin Van Buren National Historic Site Kinderhook will be stops along the way.

Get the full skinny, including video, photos, and press release, on the Governor’s official page.