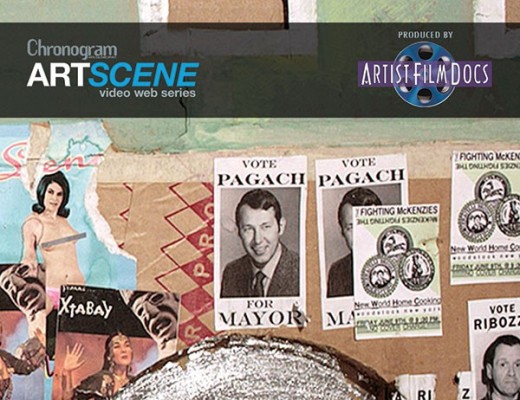 Detail from a cardboard construction by Wayne Montecalvo

[Editor’s Note: This piece originally appeared on Chronogram.com September 1st, 2015 and has been re-posted here with the author’s permission.]

Each month, filmmaker Stephen Blauweiss produces “ArtScene,” a monthly video web series with short segments on artists, galleries, and museums in the Hudson Valley. Check it out at Chronogram.com/TV. As told to Kelly Seiz.

John T. Unger is creating a massive work titled Old Glory—a 10-by-16-foot, billboard-size American flag made of 20,000 beer bottle caps—for the Stagecoach Music Festival. The film shows the planning and execution of this grand scale project, from the measurements to the placement to the color scheme—red, blue, and gray—to the actual work involved in putting it together. There were inherent hurdles in creating the piece; for instance, instead of simply nailing them in, he had to first punch a hole into each individual cap before he could adhere them to the wood. According to John’s conservative estimate, he swung the tack hammer about three- to four-hundred-thousand times during the process. Some people are thrilled by the piece, but other people look at it and they’re appalled.

As a ceramicist, Robert Hessler improvises with the clay, he doesn’t force it. The different colored glazes are a result of chaos and experimentation. I spent half of a day filming him working on a single piece, so I watched this vase grow from a lump of clay. The vase itself is an unusual shape, with an extremely round base embellished with a magnificent long, thin neck, his signature style. The glazes are fabulous colors that he’s learned to concoct by experimenting with different chemicals over the years, always being a little surprised how they’ll come out.

Wayne Montecalvo’s wide range of work includes prints, paintings, sculptures, videos, and collaborative street performance, but this segment focuses on his cardboard pieces. They’re raw, sophisticated, elaborately constructed postmodern urban facades. To texturize them, he always incorporates used or found cardboard that may have interesting watermarks, tears, or wrinkles that add a patina to the final product. That these pieces are created using mostly three materials—cardboard, masking tape, and Elmer’s glue—is incredible. While he isn’t working on them currently, as a multifaceted artist, he incorporated some of his cardboard pieces into some fascinating independent films he produced earlier in his career.

On the Cover: Nadine Robbins

This month’s cover shows poet Matthew Hittinger sporting a crown based on that of the fictional cartoon character She-Ra as part of Nadine Robbins’ portrait series “Bad Habits and Guilty Pleasures.” Nadine depicts her subjects engaged in a range of gluttonous, embarrassing, or otherwise hidden indulgences. Her photorealistic painting style is absolutely pristine, the oils blending together in just the right ways to really bring them to life.