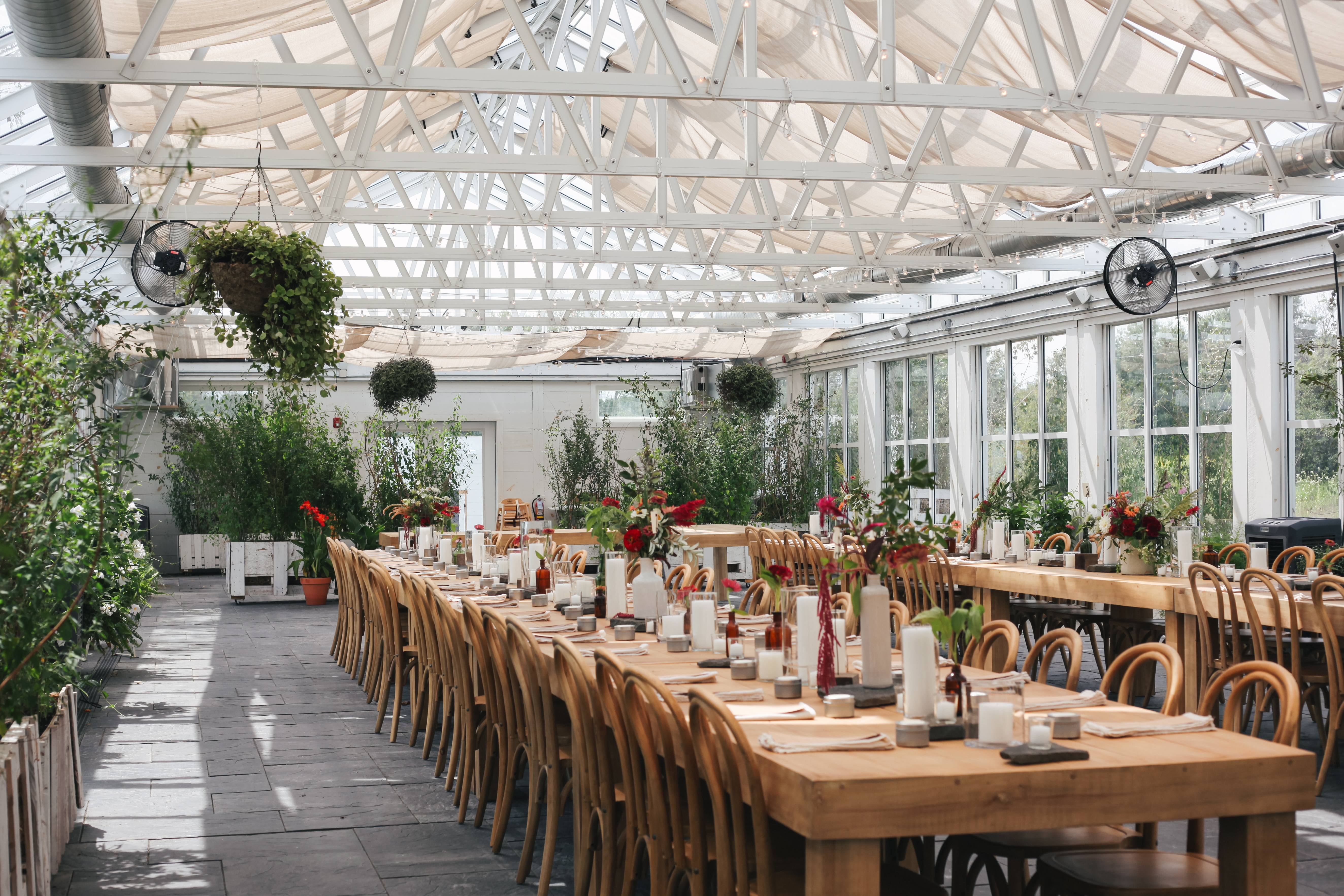 Sometimes you look at something over and over again until it magically takes on a life of its own. Such was the case with The Greenhouses, a new hotel/restaurant/wedding venue in Wallkill, NY.

In 2015, Sally Watkinson and Doug Posey were living in the city and expecting their first child, when decided to pounce on a property for sale in the Hudson Valley. Audrey’s Bed & Breakfast, a 1740 cedar-shake farmhouse, had garnered widespread acclaim as one of the most pet-friendly lodging options in the country—plus it had land to roam, a swimming pond, and spectacular views of the Shawangunk Ridge. With corporate jobs on locked in the city, the B&B would just be their country retreat and fun side project. Yeah, that’s how it always starts.

Heading into the weekend with this stunner. Captured a few weeks back. Shared today. 📸 @whoajess #audreysfarmhouse #weddings #farmhouse

“We quickly realized it was a full time gig,” Sally says. “We thought to ourselves, ‘Why try to manage crazy commute? Why force living in city, when we could do this for a living and actually get more quality of life.’” So the city mice became country mice, moving their home and starting their family in Wallkill. And every morning, over a cup of coffee, they would stand on the porch and look at the dilapidated greenhouse across the street, while a seed grew in the back of their minds.

“It was an old flower nursery,” Doug says. “No one had used it in decades. There were boats and trucks buried in back.” For weddings and parties, Audrey and her husband Don would rent the lawn for parking, which Sally and Doug continued doing, eventually mowing the grass, and exploring farther and farther into the overgrown labyrinth of hoop houses and crumbling structures.

The central greenhouse was a poster child for nature’s revanchist campaign. Reclaimed by flora, the ultra-utilitarian was transformed into the mythical, with trees growing through the roof and big vines snaking up the posts. “We thought, ‘How amazing would it be to have a dinner party in there with some of our closest friends?’” Sally says. “We imagined dressing up that super lush, magical space with beautiful farm tables and string lights.” A Pinterest wet dream. With her background in visual merchandising, it was not hard for Sally to see the potential. Over months and cups of coffee, the idea snowballed, and suddenly they were dreaming bigger—wedding venue, hotel, restaurant. 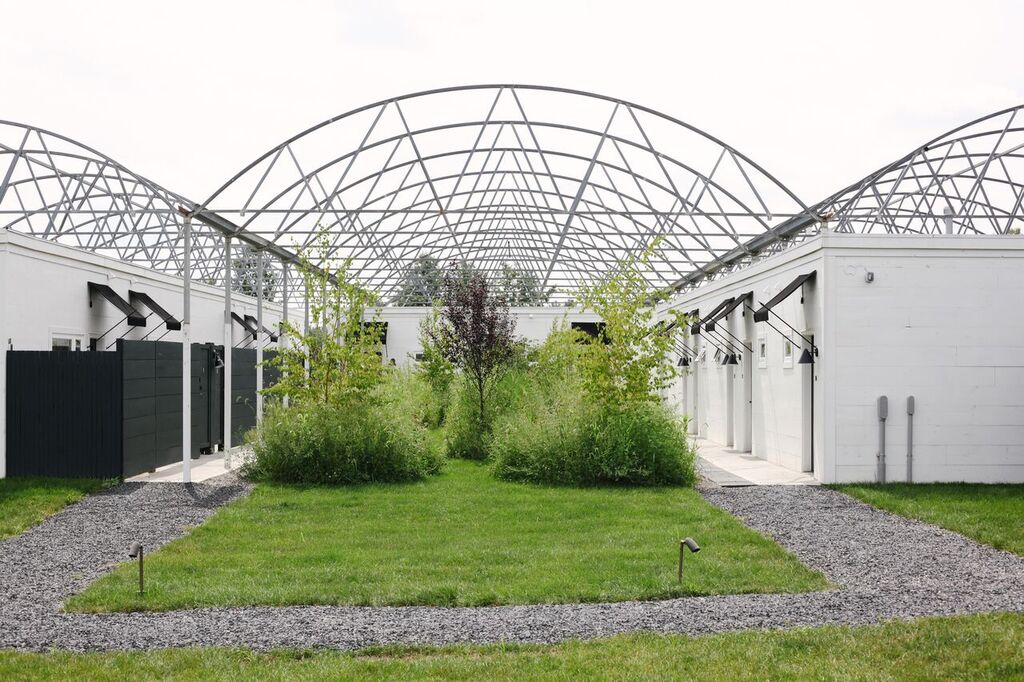 So they asked around—friends, neighbors, people in town—trying to grasp what would be involved in a development project of that size. And when they finally bought the five-acre property in January 2017, it was with their neighbor on board as the architect (Studio Mapos) and a posse of supporters at their back.

“It wasn’t like we set out to do a cap raise, we just started telling everyone—friends, family, guests,” Doug says. “People would say, ‘This idea is magical. Kind of insane, but magical.” Ultimately they cobbled the money together through a mix of equity capital and debt capital, going through 35 banks before learning enough to make a convincing proposal and get a loan.

Then came the fun stuff—the Storm Water Pollution Prevention Plan, which included massive earth works like digging a series of ponds and changing the grade of the site to protect wetlands; the parking lot; the lighting plan; the landscape plan; and finally, the building plans, with their chorus of architects, engineers, and contractors.

Doug and Sally proposed to build in the original footprint of the property, replacing structures where they stood rather than radically altering the layout. “The original greenhouse was an agricultural structure that we could never have gotten permitted for an assembly use,” Doug says. “So we put a newer building in its place, which is now the main greenhouse space.” 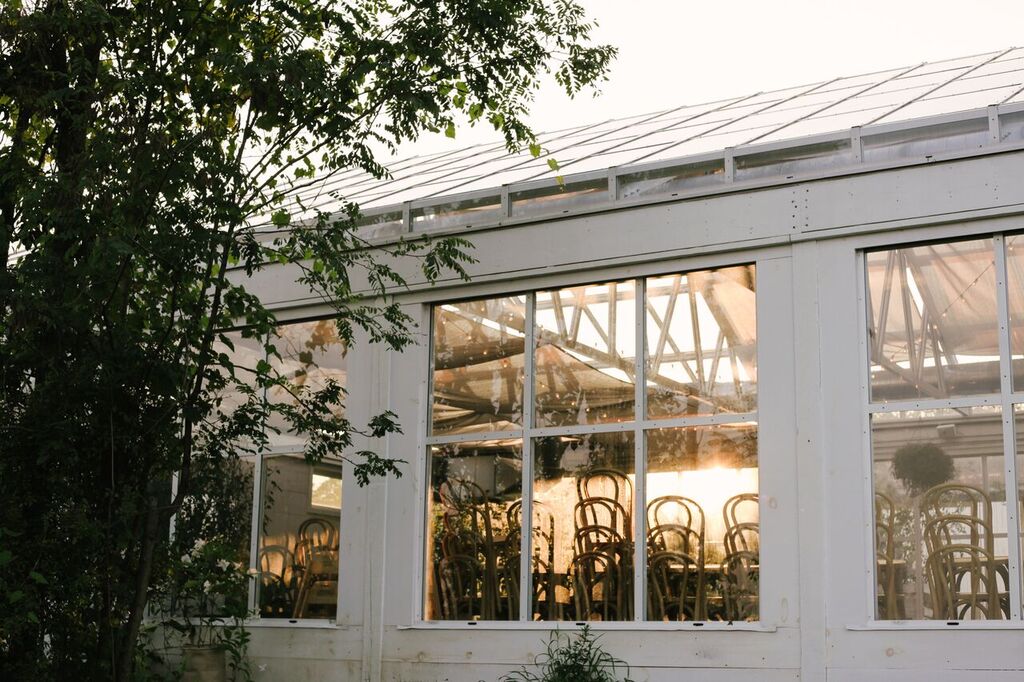 Built in place with a wood frame and glass panels, the replacement structure is a legitimate greenhouse (though swanky, with its concrete foundation and a bluestone floor). It will warm from the sun in winter, allowing it to be a cozy four-season facility. “We actually have more trouble cooling it than heating it,” Doug says truthfully. The glass walls are lined with planter box hedges, flowering vines, lush houseplants on mix-and-match vintage crates and stools. Potted ferns hang from the metal trusses criss-crossing the space. It is a tamed, government-sanctioned re-creation of the tropical wilderness Sally and Doug first encountered on the site. “The magic of this place was how nature wound around and through everything—that’s the feel we set out to give back,” Doug says. 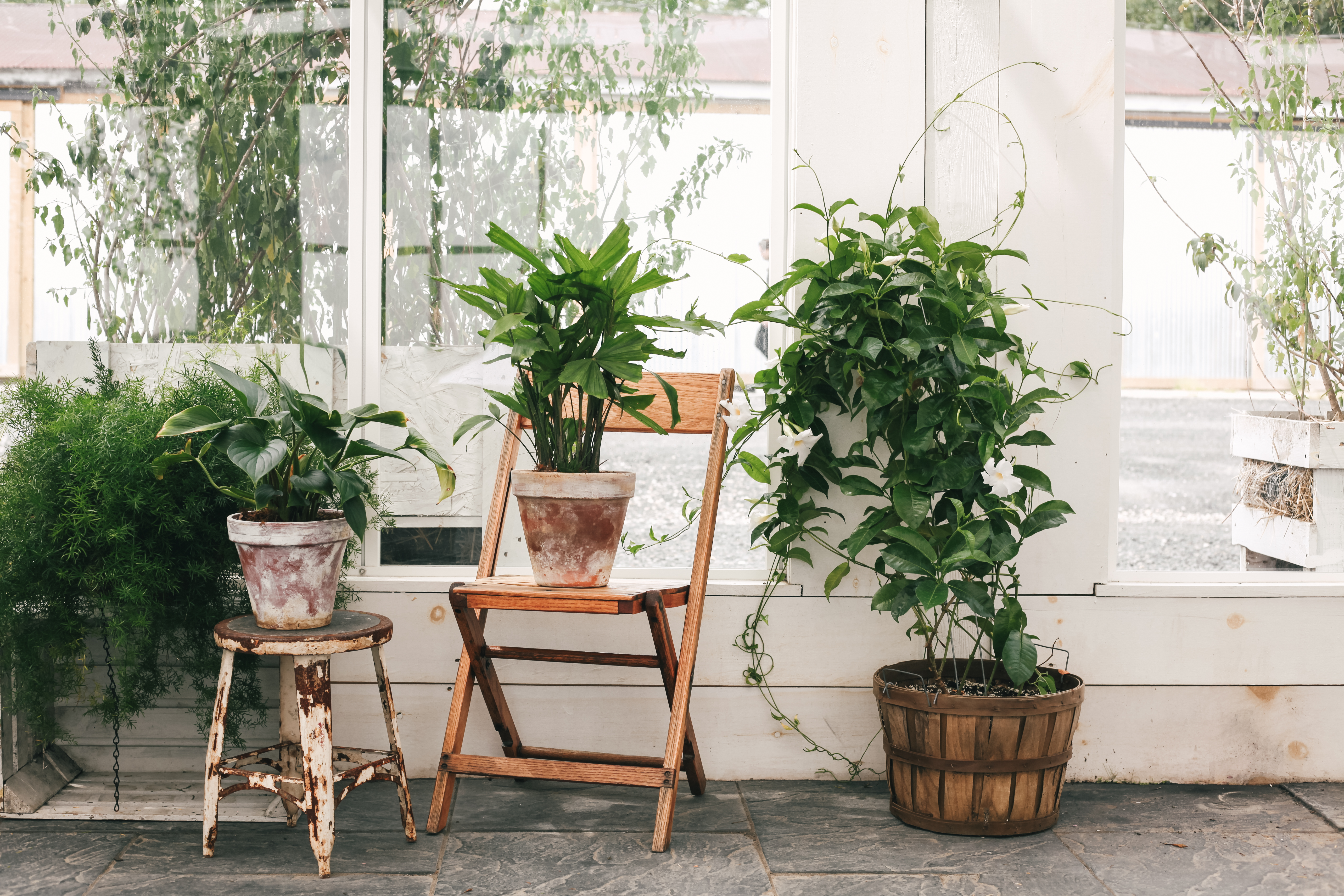 The 3,000-square-foot greenhouse can comfortably accommodate upwards of 250 guests seated banquet style (and yes, they did get those farmhouse tables). The greenhouse is structurally tied into an adjoining 2,000-square-foot barn, which serves as a multi-use event space with a bar and five bathrooms, as well as the lobby for The Greenhouses hotel. It’s where they project classics like The Goonies and Princess Bride every Thursday night (with full dinner service, open to the public). With white walls, modern sconces, and wood floors this is a far cry from the drop-ceiling reception halls of our parents’ day. 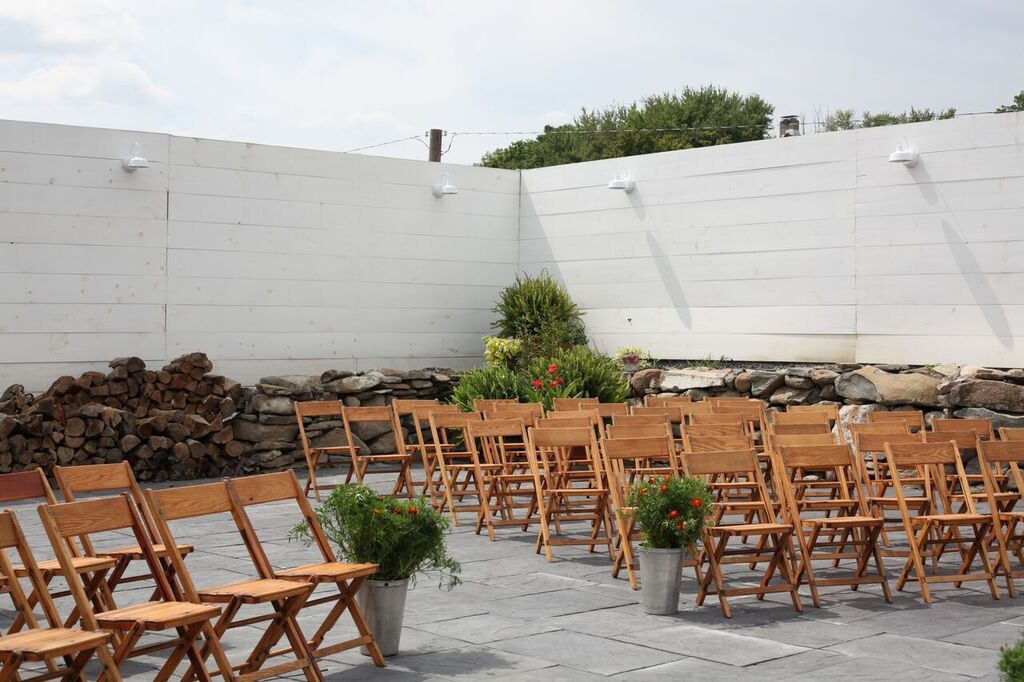 Behind the greenhouse, an open-air, walled patio is an additional space for wedding proceedings—ceremony, cocktail hour, what have you. The bluestone patio connects to the property’s restaurant, which is open to hotel guests and the public Thursday through Sunday.  The Greenhouses Kitchen, built on the site of a former cement block warehouse, serves up a rotating mention of farm-fresh seasonal fare. On a warm July night, options included a red grape tartine appetizer, with grapes, goat cheese, and pork cracklings ($7.29); a steak frites main served with garlic scapes ($24.95); pulled pork with red cabbage salad and polenta ($15.50); and the fixture—the $9 Burger.

“Our first statement was we would have a burger for $9,” Doug says. “This place isn’t for city people to come pay city prices. Like with the buildings, we wanted the restaurant to fit into context that existed.” Sally adds, “We live here, we’re not trying to price anyone out. We want to make it accessible to everyone.”

In the place of the old hoop houses, Sally and Doug constructed a single-story U-shaped building with a central courtyard, which houses The Greenhouses’ 14 guest rooms. Seven of the rooms are queen suites, six are king, and one, a deluxe suite. All are stocked with the luxurious botanical toiletries from Aesop.

The metal arcs of the original hoop houses have been incorporated into the roofs of the guest room building, adding an agricultural feel. “We think there is a lot of beauty in that frame as is, and we want to highlight that,” Sally says. 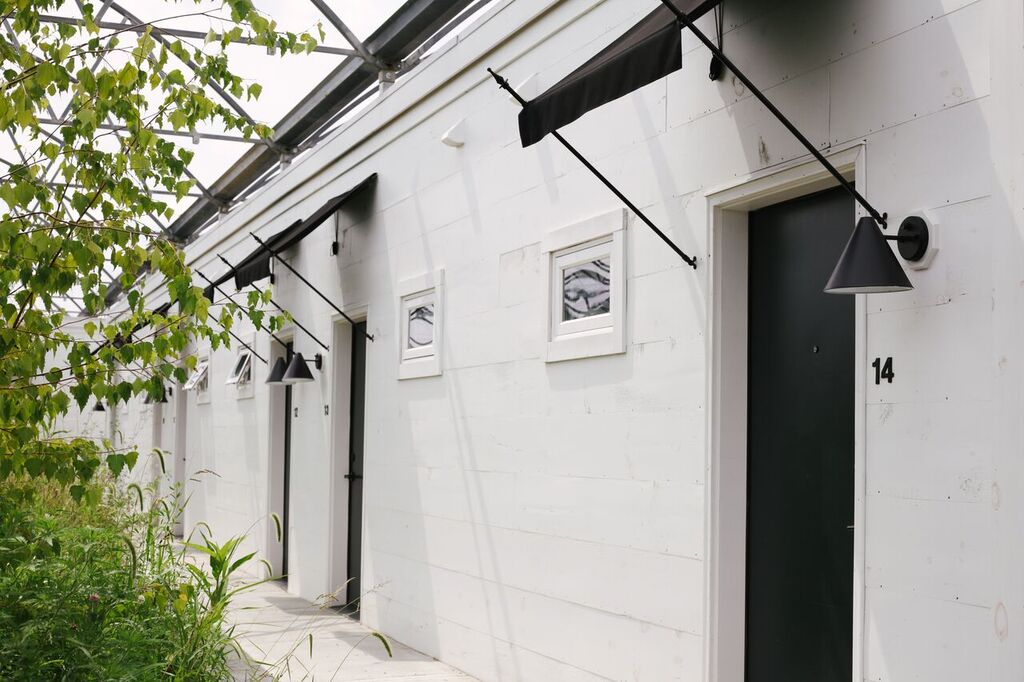 This decision epitomizes the couple’s design ethos for the project—a marriage of refined aesthetic and existing context, a stripping away, back down to the basics, in order to let simple colors and archetypal shapes shine. “We took photos of agricultural buildings around town and thought about how they were driven by purpose. There wasn’t a lot of flourish in the design, not a lot of color,” Doug says. “We wanted the site to feel like it didn’t just spring up out of earth, we wanted it to feel like it had always been here.” So they followed the local vernacular, albeit with a clean, comfortable New York City sensibility laced in.

The rooms feature a mix of traditional wood furnishings with modern rattan accents, plush sheepskins, and modern lamps. “ What we try to do is not weight it all in one look and feel,” Sally says. “It’s a constant mix of modern and traditional.” In the longstanding tradition of Audrey’s, the entire property is dog-friendly. The king suites each have their own 200-square foot back patio so furry friends can go in and out without worry.

“The site had all these different spaces. That was the fun part—walking around discovering pockets when you are completely enveloped in wild natural environment,” Sally says. “We’ve been able to deliver those moments around site, as well as deliver our brand of hospitality. You can’t ask people to come stay in a wild natural environment when they’re looking for quick, comfortable getaway.” 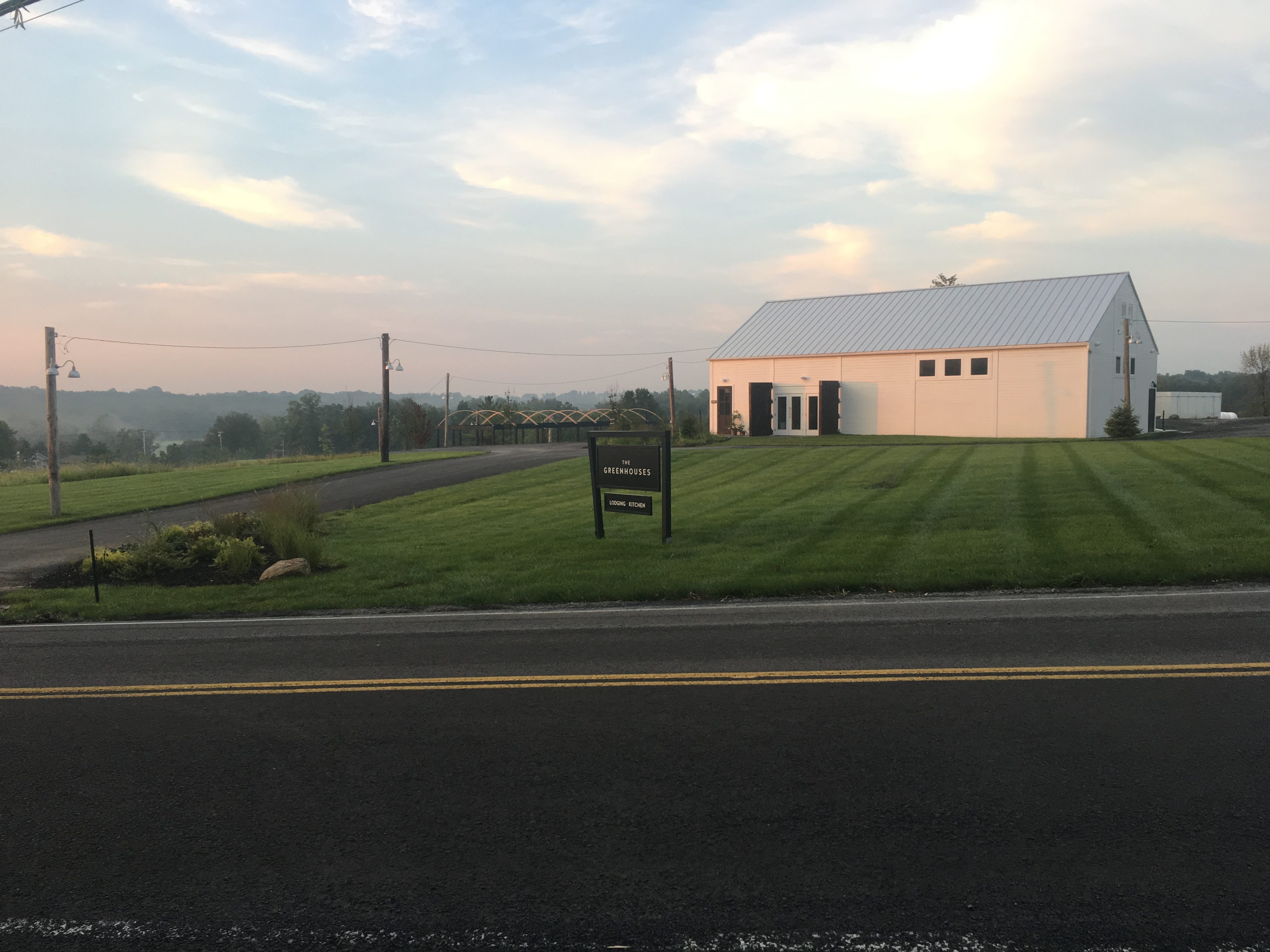 Across the street the historic farmhouse is still available for rent. It sleeps up to 10 in its five bedrooms, and an additional cottage sleeps up to four more. Check out the accommodations.

Getting Hitched in the Hot House

When you book a wedding at The Greenhouses, you get exclusive use of the greenhouse and barn from Friday afternoon through Sunday morning, which is a welcome change from the breakneck turnover of venues that cram three nuptials into a weekend. The site fee for events ranges from $8,000 to $12,000, depending on the date. The fee includes use of the farm tables, bentwood chairs, dishware, cutlery, glassware, and table linens, plus bar and serving staff. They also offer per-head catering and alcohol packages. Sidenote: The hotel and restaurant operate throughout private events so you may share a late-night fireside chat with an out-of-town guest.

That said, bridal parties have first dibs on all the accommodations, from the farmhouse to the cottage (turned bridal suite) to the 14 guest rooms. All told, the combined two properties can sleep over 40 guests, which is a serious chunk of the bridal party and travelling family all taken care of. And Sally and Doug have not forgotten their B&B roots, breakfast is included for all guests. 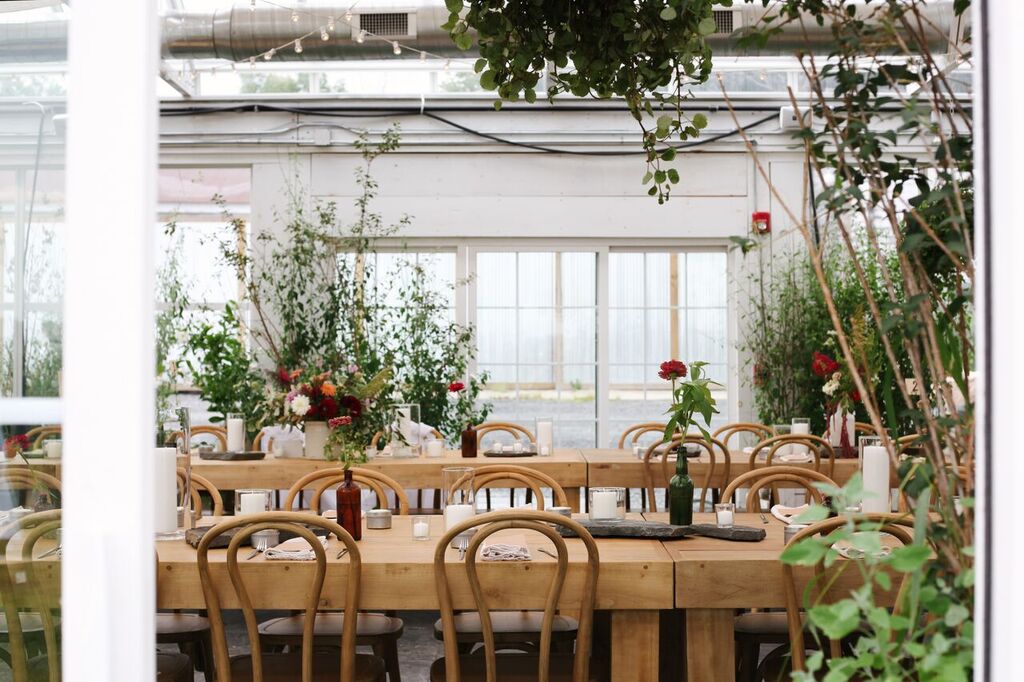 The first wedding at The Greenhouses was this past Memorial Day weekend, and there are 30 booked this year. Sally and Doug are onsite daily managing operations, delegating, and helping out, supported by a crew of 25-strong.

Any initial trepidation from some neighbors has largely given way to whole-hearted support. “Before we opened, some people voiced concern because they weren’t sure what it was going to be—one neighbor thought it was going to be a nightclub,” Doug recalls with a laugh. Sally chimes in, “If you don’t know what something is, it’s natural that you would have some fear, but since we’ve opened, a ton of locals have come by and are super excited about what we’re doing. They’ve hosted bridal showers here; their kids work for us; they come to movie night. Ultimately been a really good experience.” 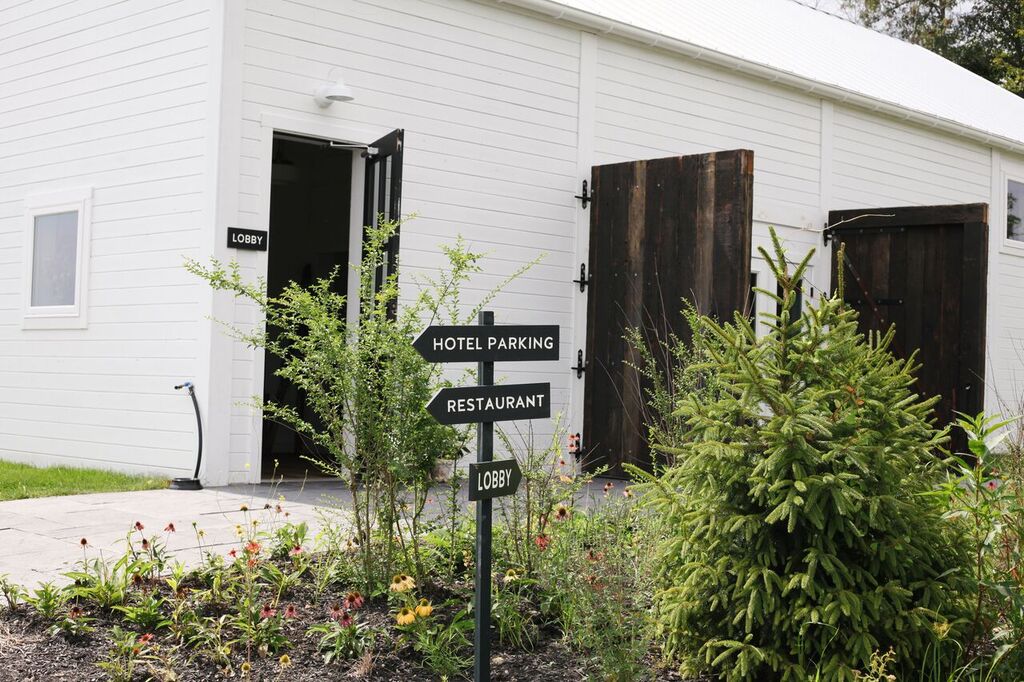 All photos by Bea Rue Studios.