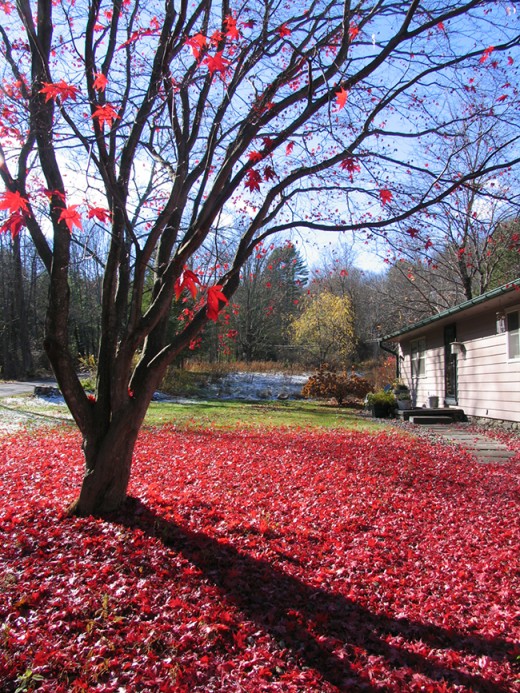 I just discovered that graphic at the bottom of the weather web site, the one that tracks the sunrise and sunset. Wanting to catch the first light coming though a Japanese maple tree out front, I stood with my camera in the 35 degree air, waiting. The chart predicted sunrise at 6:38, but because I live in the foothills of the Catskills, it didn’t crest until 6:50—so now I know twelve minutes need to be added to the prediction; at least in November, it does. Since it rises so much farther north on the horizon in summer, it might require a few extra minutes one way or the other, depending on the height of the north-easterly hills. I’ll have to check next July.

Meanwhile the grass beneath this tree is covered with lipstick red leaves. I want to stand under it all day, but there is dust to fluff around the house (it never goes away completely) and a deadline to hit (the object of much procrastination). Soon I’ll procrastinate about having to fluff the leaves up with a rake. I’ll feed them through a leaf shredder and use them as mulch in the garden and on the compost pile. Hopefully, I’ll get this task done before the sky opens up with an autumn deluge or, worse, an early snowfall. Either way, if I miss Nature’s deadline, the moisture will compact the layers of fallen leaves and make it more difficult to rake them at all. And they will stay in place until spring.

In New Jersey, we used to hire an able team of guys from Central America to manage our landscaping needs. They would swoop in weekly from April through November to mow, clip, blow and rake, dig and plant, fertilize and weed-whack with great speed and finesse. It was like watching the ballet, and I’d applaud and wave as they loaded their tools onto a trailer and drove away.

Now we do it all ourselves—or we don’t do it, as is sometimes the case. We’re surrounded by hundreds of mature trees that dump millions, perhaps billions, of leaves each fall, most of which never feel the touch of a rake. And three summers ago, my able husband decided that three acres was too damn much grass to mow, even on a riding tractor. We gave a huge portion of the lawn back to the Great Mother Earth and all her creatures, who I think appreciate the cover. It was the right thing to do. As is turning dead leaves into rich new garden soil. That’s what I think, anyway.