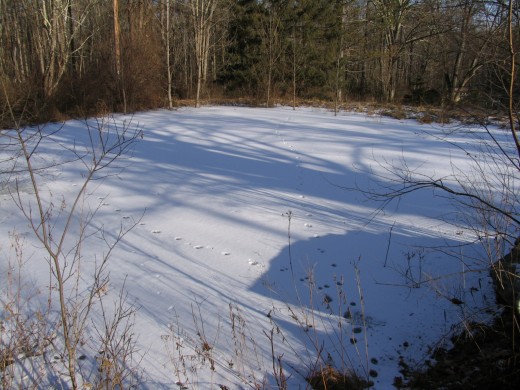 The pond on our property was dug by a previous owner. Spring-fed, it fills and empties along with the seasons. Sometimes I wonder what the resident fish think when their world expands and shrinks so drastically. In spring, they swim a vast expanse of fresh water and nibble at its edge near fresh grass. Later in the year, their universe drops and contracts, sometimes losing as much as four feet of depth so that only rocks and mud are visible around the perimeter.

At this time of year, when the surface freezes solid enough for deer and foxes to trot across it, do the fish assume the worst? That perhaps “the end” has come? Before living in the Catskills, I didn’t think much about the survival of aquatic creatures in winter. Now my latent naturalist tendencies cause me much perplexity. I’m worried about my koi. They lurk in snow-covered darkness for weeks at a time.

I got over the fact that their shiny orange bodies glint in the summer sun, attracting heron and diving ducks into my yard for a quick lunch. They’ve multiplied prolifically since my son-in-law dumped the first 13 slithering bodies into the pond a few years ago, so this culling is probably a good thing. And it’s thrilling to witness the loping take-off of long-legged Great Blue with a fish trapped in its beak.

But thinking about them trapped in “a pocket of warm water” as pond experts suggest they do concerns me. Who designed this evolutionary scheme wherein already cold-blooded creatures are forced to endure such a drop in temperatures, I wonder? Do frogs and fish actually produce their own anti-freeze? Are they conscious? Afraid? Bored?

Torpor and hibernation ensue, much like it does for some humans. Enduring a deep freeze slows us all down. Gives us all the forced opportunity to conserve energy, to meditate on the immediacy of the next breath, and to dream in our 400 million-year-old pre-amphibian brains of the warmth of spring.

fish under the ice
oblivious to the cold
awaiting nothing~~