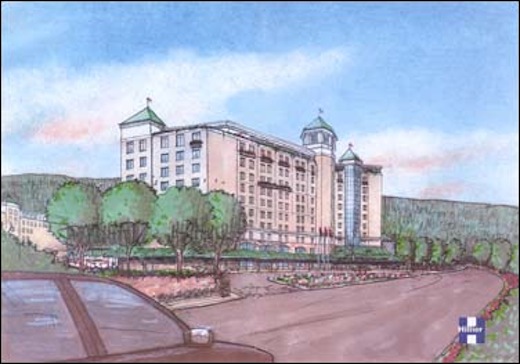 The question only applies if you think the Catskills need saving. And while not everyone does, a tour through the abandoned bungalow colonies of Sullivan County or the sparsly populated hamlets of Greene County should be enough to edge some toward the desire for a sweeping solution.

The latest one on the table: an enormous, $600 million gambling resort on the site of the former Borscht Belt hotel The Concord, developed by Westchester-based Cappelli. It’s been discussed for years, and last Thursday, the New York State government voted to allow casino gambling, clearing a huge hurdle for the development, which still has many more hurdles to jump. (The law itself will have to be approved by a few more legislative bodies, too).

We don’t take a position on the inherent good or bad of gambling (especially since a certain Upstater founder grew up a block away from the Saratoga Racecourse, where her father has been in the house band for almost 40 years), but we thought this Newsday editorial made a good point: Why let neighboring states draw New Yorkers to their casinos to gamble, when we could keep the revenue from this [admittedly controversial] activity here?

Readers, what do you think? Are you for resurrecting the Borscht Belt with slot machines? Or have you got a better idea?