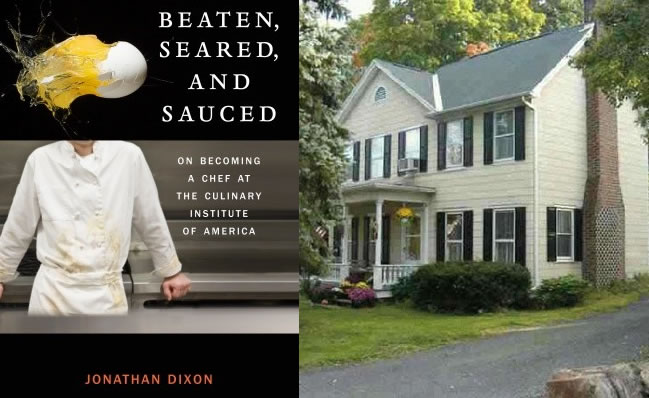 "If Denis Johnson had written A Prairie Home Companion, it would probably be pretty close to how I see Saugerties"

Many of Brooklyn’s creative class repair to the hills for more time to write. For Jonathan Dixon, the move had a culinary bent. He and his girlfriend, the writer Nelly Reifler, kept a one-bedroom apartment in Brooklyn but decided to spend much of their time in Saugerties, up and over the river from the renowned Culinary Institute of America. Rather than relaxed, Dixon’s new life was busy as he trained as a chef there, his plan to supplement his writing income. Lo and behold, the two worlds merged in the form of a memoir–Beaten, Seared and Sauced: On Becoming a Chef at the Culinary Institute of America.

We asked Dixon about the pros and cons of Saugerties (“the eccentrics who might have been too edgy for Woodstock settled down the road in Saugerties”); splitting life and time between upstate and down; and a review of the upstate culinary scene–can you really get good pizza due north of The Bronx? His answers are below. Let us all hope we somehow end up at his place for dinner some night!

What prompted you to move upstate, and why Saugerties?

Nelly had been fantasizing about moving upstate for a really long time and then I got into cooking school. The stars just seemed to completely align and we went for it. We wound up in Saugerties pretty much because of Bob Dylan. A while before we moved, we’d been up in Rhinebeck visiting Nelly’s parents. I knew that Big Pink, the house where Dylan and the Band recorded the Basement Tapes was nearby and I wanted to see it. To get there we had to drive through Saugerties and we just immediately liked it.

Give us a review of Saugerties, for those interested in possibly renting or buying there: the pros, the cons, the unexpected drags and delights.

Saugerties is right next to Woodstock and has the same concentration of eccentrics. But the vibe I always feel humming around me is that the eccentrics who might have been too edgy for Woodstock settled down the road in Saugerties. So there’s a working class element to the town, a post-hippie element, an increasing NYC expat element, all set in the midst of some unbelievably gorgeous scenery. If Denis Johnson had written A Prairie Home Companion, it would probably be pretty close to how I see Saugerties. One of my favorite parts of it all is the large number of family-owned businesses, and you get to know those families in the course of shopping and errand-running. You wind up feeling a very personal connection to town that way.

As for the ups and downs: The summer is perfect, since it’s warm during the day and cools off so much at night, and the foliage in the fall is pretty extreme. If you like taking walks and hiking, you’re hard-pressed to do better than you can around here. I guess one of the downsides is that from December to March, the snow can be a real drag. There’s virtually no good pizza here, either, and very few places to get take-out. And in a 20-mile radius, there’s a single good Chinese place. But I probably shouldn’t be eating scallion pancakes very regularly, so maybe that’s for the best.

How do you split your time between Brooklyn and upstate?

I have gigs cooking privately for families in Manhattan, so I always wind up going down to the city for a few days a week. Nelly teaches at Sarah Lawrence, which is about 40 minutes from the city, and she stays at the apartment the night of her classes. Sometimes we can travel together, but other times we have to go separately. We really value weekend time together, though. 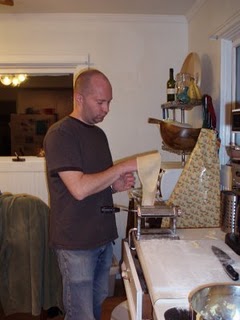 Dixon in his upstate kitchen

Tell us about your decision to become a chef, and how that fit with your writing self and your writing life–how similar or different are the pursuits?

I know that the traditional vocation for most writers who don’t make a lot of money from their writing (which I guess is 99.99999% of us) is to teach. But I always loved cooking. Really loved it. I would, in fact, rather be cooking than almost any other activity I can think of. So I thought that cooking would be the ideal way to supplement the writing. But I kind of have to be in either cooking mode or writing mode; I don’t think the two mindsets are very compatible. Being a good cook is a matter of repetition and speed, which I’m not sure are two things that lead to good writing.  But the main way writing and cooking come together is that there are a lot of writers up here, so Nelly and I often have writer guests over for whom I cook.

Did you know you were going to write a memoir when you started at CIA?

I had absolutely no idea that I’d be writing a book when I enrolled at the CIA. I really just wanted to be a student. Since my classes were at night, I figured that I could write my fiction during the day, but it didn’t really work out that way. The work involved with attending the CIA kind of takes up most of your mental space. But I still wanted to write and I began keeping a blog about my classes. One thing led to another and, one day, I found myself contracted to write a book. That was pretty much the best day of my life, even though the reality of having to write the thing while I was in school took a while to sink in. That was pretty hard, ultimately.

Please compare your two kitchens, Brooklyn and upstate. Do you cook differently up there?

The apartment kitchen is, since it’s New York City, really tiny. And it has no ventilation. So I either have to set up an elaborate system of fans to get the air moving and out of the window, or I have to cook really carefully. When I make fried chicken, I have to weigh the pro’s and con’s of having tasty chicken vs. the thick scent of hot oil that will pervade the apartment for hours and hours. But I can really let loose upstate. The kitchen is huge, we have a good amount of counter space, and there’s a really good exhaust fan over the stove.

Do you have more access to fresh/local food up there? Compare access to veggies and meat and such, since we have such fine farmers’ markets and CSAs downstate.

Many people are so devoted to it that they’re only a half-step away from offering human sacrifices at the gates of the Union Square farmer’s market, and I admit, it is pretty great.  But being upstate means living right at the source of the food that winds up there. And buying it up here, from the farmers, is a hell of a lot cheaper. Plus, a lot of local farmers wind up selling to some of the big supermarkets here—Adams and Price Chopper, for example—so finding good meat and produce is pretty easy.  And I really like dropping in at Sauer Farm or Story Farm and seeing what they just picked 15 minutes earlier. Occasionally, if you ask at Sauer Farm for something that isn’t on display, they’ll go out in the field and pick it for you.

But, then again, there’s nothing up here like a Sahadi’s. I went into Eataly on 23rd Street in Manhattan a while back and was pretty impressed. The selection was amazing and the prices weren’t as outrageous as I expected them to be. There’s nothing like that up here, either.

Favorite places to eat, in Brooklyn and in Saugerties?

In Brooklyn, Manhattan, and Queens, I’m a big fan of Sripraphi in Woodside, the duck buns right near the subway in Flushing, Tasty Dumpling in Chinatown, the Red Hook carts in Red Hook, Congee Village, also in Chinatown, the pizza at DiFara’s in Midwood (one time when Nelly and I were there, we hung out with Harmony Korine while we were all waiting for our food), Joe’s Pizza right near the IFC theater and the W. 4th Street station, and Prime Meats in Carroll Gardens.  Up here, I like Miss Lucy’s and ‘Cue (the new barbecue place in Saugerties). I haven’t been for a while, but Fez is pretty good (though I recall wishing their portions were a tiny bit bigger). The Bear and the Little Bear Café (the one good Chinese place around) in Woodstock are both nice. I had a good meal the one time I went to the Red Onion in Woodstock and I’m curious to try Cuccina a few doors down from it (owned by one of the CIA instructors). But I am begging someone in the region to fix the pizza situation…