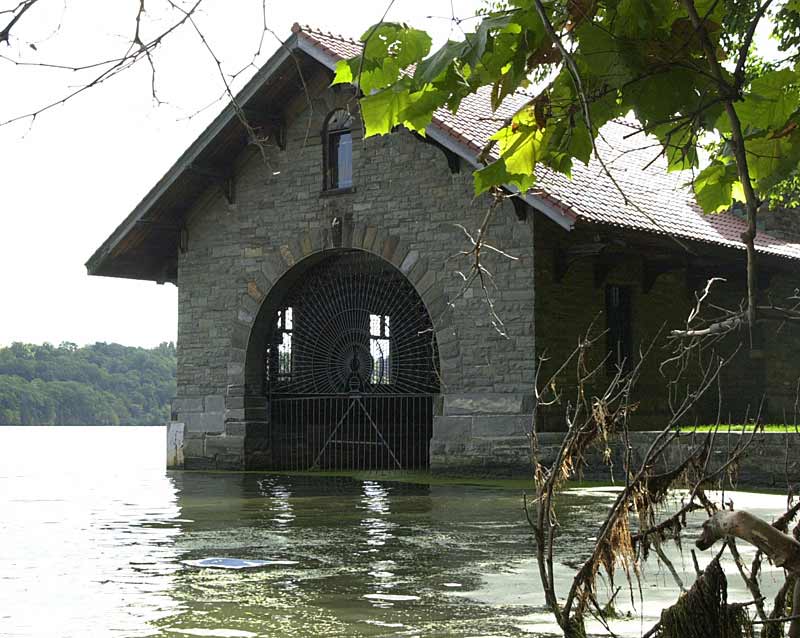 Out in the middle of the Hudson River just a few miles from the hamlet of Esopus in Ulster County lies Esopus Island, a thin strip of land with rocky outcroppings and dense forestation. It’s closer to the eastern side of the river, just between Norrie Point and the Poughkeepsie Yacht Club. In spite of the fact that the island appears deserted at first glance, it has a storied history that continues to pique the curiosity of long-time Hudson Valley denizens and visitors alike.

For years, Esopus Island was closed to the public, but now, if you have a watercraft and the gumption to get there with all of your gear, you can spend the night there in one of its campsites. There are structures there: A retreat center formerly a monastery formerly an estate. A cool stone boathouse (depicted above). An A-frame cottage situated on tiny Bolles Island. But perhaps the most fascinating aspect of the island isn’t the buildings still standing, but the ghosts of residents long past, particularly one resident, Aleister Crowley. That’s right, the mystic Pagan bad boy known for leading the ladies down the primrose path to destruction took an extended camping trip on the island for several years beginning in 1918. Subsisting on provisions provided to him by the kindness of both strangers and friends, Crowley roughed it on the island, communing with nature and plastering phrases like “Do What Thou Wilt” on the island’s rocky outcroppings. Those are gone now, but the mystery of the island and its most famous squatter still echo through the trees.

You can still go and visit the island, even if you don’t have your own kayak or canoe. Atlantic Kayak Tours will take you on a paddle around the island via the Norrie Point Short Tour for $50, or $40 if you bring your own equipment. In other words, BYO pentagrams and virgin’s blood.

Want to read more about Crowley’s time on Esopus Island? There’s a great article in the Hudson Valley Almanac that came out last year, or this longer article here, or here. Or, just type “Esopus Island Aleister Crowley” into a Google Search. We did, and we watched in wonder as several hours magically disappeared right before our eyes. The ghost of Crowley’s doing, no doubt.