Each week (or more!), writer and farmer Larissa Phillips brings us tales of the transplant life. She left Brooklyn for an expanse of land in Greene County, and updates us on life on the farm. 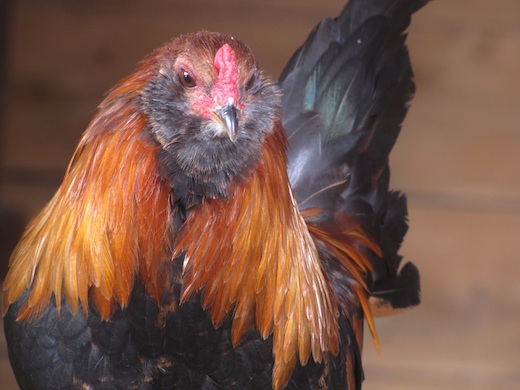 Yes, Virginia, we slaughter our roosters.

We slaughter our roosters with every bit of the squeamish, precious, halting nonsense you’d expect of former urbanites.  Every rooster is discussed endlessly, and usually someone in the family will petition for its clemency. “But Jewel’s so pretty!” “Big Al doesn’t bother anyone.” “Pretty Boy has lifetime immunity.” “BUT I LOVE JAZZ!”  That last one with real tears, and determined little 8-year old arms prying the rooster from my arms in a real- life Charlotte’s Web moment.

Every rooster has his supporters, with the outcome that we have way too many roosters. They are noisy, they fight each other, and they overwhelm the poor hens, who are actually trying to get some work done without a bunch of over-sexed roosters piling up on top of them.

I am the most ruthless in the family, and last week I had my druthers. All weekend I told everyone:

“We’re slaughtering four roosters on Sunday. Four. Does everyone hear me?”

“We’re having chicken for dinner on Sunday. Our chicken. Everyone knows that, right?”

“Did you sharpen the knife yet? Which knife are you going to use?”

It takes us a lot of emotional prep to actually get down to business.

Look, I’d rather not kill anything, but here are the facts: We eat meat. We hatch chicks. Half of the chicks we hatch grow up to be roosters. Too many roosters cause mayhem and danger and noise. They have to be given away, slaughtered, or left outside at night for predators. Slaughtering them is a quick process, and a much faster death than they’d get at the hands of a fox or raccoon. Did I mention that we eat meat? We’re just trying to play fair here.

So on Sunday afternoon (after our vegetarian guests headed back to the city) we gathered up three roosters – two big aggressive ones, and a feisty little bantam.  Nobody could agree on the fourth, so I settled for three.  All three of these guys were hatched on our farm in September, and raised by our most motherly hen. They slept under her wings until they were bigger than she was. They’ve had as nice a six months as any rooster could ask for, and now they are aggressive and noisy and have to go. We cut their throats under the big locust tree in our back yard, bled them out, and then brought them inside for processing.  This is where it got interesting. “Can I do one?” That’s Ernie, my 12-year-old son.

“Can I pluck it and clean it and everything? I’ll do it right next to you so I can see how you do it. I could do the little bantam.”

This is my kid who used to be so picky he wouldn’t eat cake. Now he wants to pluck and eviscerate a tiny dead chicken. Awww.

Sniff. What can I say? It was a beautiful mother-son moment. It was fun. We dunked (in hot water, to loosen the feathers), we plucked, we eviscerated, we rinsed. Through it all the 8-year-old kept coming to peer at our progress, complaining loudly about the smell, and then jumping up and down and asking when the chicken would be ready to eat.

With two chickens on a roasting pan (a third in the freezer), Ernie asked if he could prep his chicken. Out came the salt and pepper, the paprika, the lemon, the garlic. 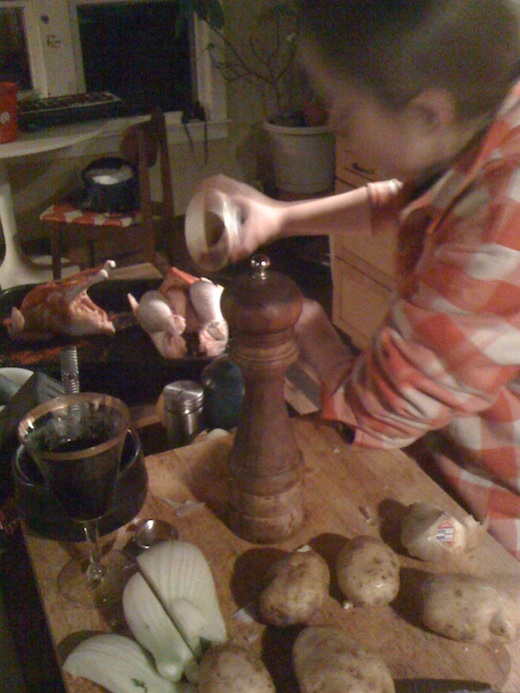 An hour later he had a beautiful, tiny roast bird on his plate, with potatoes, fennel and greens. He ate the whole damn thing. I was so proud.