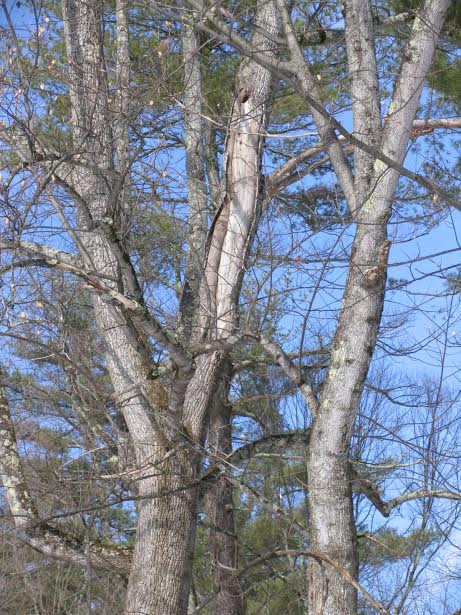 Shortly after we moved into our little mid-century cottage, lightning cracked open right above us, making me jump out of bed. I grabbed my glasses and peered out a window, but darkness and rain obscured the view. I couldn’t see anything outside. The thunderstorm dumped a few inches of precipitation and moved on.

So this is life in the country, we thought. I had already witnessed a tree fall deep in the woods one sunny afternoon. First it sort of creaked, then picked up speed and came crashing down with a thud, whacking away at other nearby tree limbs and smashing the underbrush flat. Nature, it seemed, was out to entertain us.

A few days after that first big storm drama, I went to grab a rake from the storage shed out back and saw that the rough concrete slab in front of its entrance was cracked. A spray of dried dirt was shot up onto the door, as if an angry animal had tried to dig its way under the slab. What really happened was a mystery until a month or so later, when we hired an arborist to walk our property and evaluate the health of all the trees surrounding the house.

He took one look at the concrete slab and said, “Oh, you had a lightning strike here.” He moved around the tree standing only inches away from the shed and pointed to two major limbs with long gashes in the bark. “See those? Lightning hit your tulip poplar up there, and the electricity went into the ground and blasted out through the slab over here.” Amazing.

The mystery had been solved, but was immediately replaced with concern over the life expectancy of the damaged tree. The arborist didn’t seem to be worried about it dying and falling over onto our house. He simply told us to “watch it” for a year or two.

That was back in 2005. We’ve spent countless summer afternoons sitting on our screened-in porch these past ten years, watching storms roll in and trees sway and howl in the wind. During Irene, a giant maple did teeter back and forth, threatening to crush our roof before it tipped away and came down. There’s never a dull moment when the weather gets rowdy.

The tulip poplar still stands. Its gashed bark healed itself as if nothing had ever happened. A few small branches have shriveled up and let go, but the tree is vital. Maybe being zapped by lightning infused it with new energy. It blooms and drops big flowers onto the yard, and seeds that sprout and take root and try to grow up fast before my husband mows them down with the tractor.