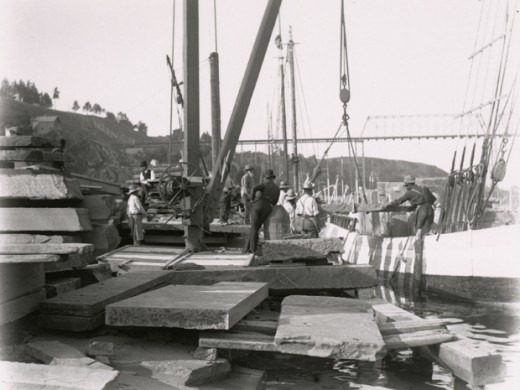 Kingston’s bluestone industry — the rock that paved the nation. Courtesy of Friends of Historic Kingston.

Here in Kingston we say, “Historic is just our beginning,” but when it comes to historic preservation, we aren’t just getting started. We know that when people are looking to move to a city like Kingston, back to a place where population has declined over the years as factories closed or the shift took place toward the suburbs, they look for historic areas first.

We have historic districts in Uptown where the original Stockade was established — along West Chestnut Street with grand views of the Rondout and the Hudson — and in the Rondout near the waterfront. But now we are taking steps and taking stock in our historic assets so we can plan for the future and expose our past.

Kingston is the home of bluestone. This is where it was conceived. Anyone telling you they installed a bluestone patio or sidewalk who didn’t get their stone from the ridge on the edge of town here doesn’t really have the authentic article. We recently completed a bluestone study in the city to gauge the location and condition of the sidewalks and to inventory what we have banked up.

We have just completed a building survey for Midtown and will update the Uptown survey in the coming year. What will we do with this data? Property owners may want to consider putting their house or commercial building on the state or national register. We may want to consider expanding or establishing historic districts around some of our anchors such as the Lace Mill or Ulster Performing Arts Center. We will use this knowledge to secure additional grant funding. But mostly we want to tell the untold stories of the City.

For those who wish to know more about what is historic in Kingston they can ask the Friends of Historic Kingston, of course. It should be no surprise that such a champion has been hard at work here for decades.