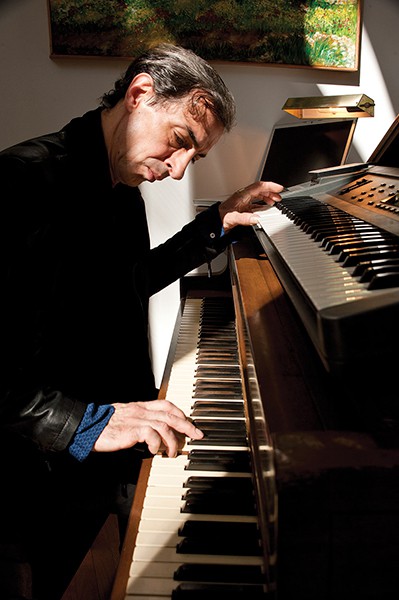 A 1930s Hardman Peck piano is among the instruments in the couple’s home. – DEBORAH DEGRAFFENREID

Even from the outside it’s clear that music fills the Bearsville home of Tasso Zapanti and his wife, Jeannine. Approaching via the garden path that links the home’s back door to its tree-lined driveway brings to the ears an ominous series of low, continuous, humming sounds emitting from the two-story abode. Once inside, you’re face to face with a regal 1930s Hardman Peck baby grand piano. Peak beneath the open top of that stately, polished instrument, toward the far end of the airy living room, and you spy its owner on the sofa with one of his electric guitars. “I don’t really play the guitar,” he says while thrumming the low stings to stoke the bundle of parallel drones piping from his speaker system. “But sometimes I just like to play with the sounds.” 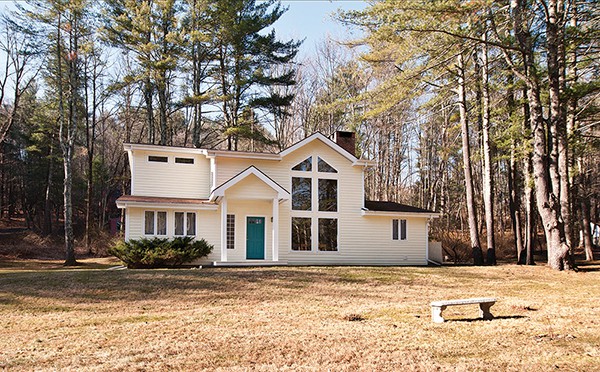 With its spacious front yard, the house is situated on two acres. – DEBORAH DEGRAFFENREID

There’s a bit of an accent there. Zapanti, who creates music for films and TV, is originally from Greece. He came to the US with his family, settling in the heavily Greek neighborhood of Astoria, Queens, when he was 11. The accent is, one might say, the siren song that drew Jeannine to him. “She liked foreign guys—and guys with long hair, which I had back then,” explains Zapanti, whose swarthy mane is shorter and streaked with gray these days but remarkably robust for his 52 years. And although his salt-and-pepper coif would have been out of place in the rock bands of his youth, it fits him fine as an older, wiser composer, one whose boyish sense of enthusiasm and wonder about his craft are as unwavering as they’ve always been. “Composing in this room always puts me in a very inspired, creative state—look at those trees,” he says, pointing excitedly to the tall grove that lords over the generous front yard of the two-acre Wittenberg Road property. “They’re like a brass section, like trumpets. Jeannine and I call that leaning one over there [a lone, tilted tree separate from the central cluster], ‘the Dancer’ because he looks like he’s off somewhere else, moving in his own way.” Dance has been another source of inspiration for Zapanti’s music, as well as an interest he shares with his wife; Jeannine, who works as a psychotherapist, has a background in dance. “Stravinsky is one of my biggest influences, and he wrote for ballet,” says Zapanti, gesturing toward a sculpture perched on a sideboard. Made from a piece of driftwood the couple found on a beach in the Turks and Caicos Islands, its limbs are spread outward with a graceful span. “We were drawn to it because it reminded us of a dancer,” says the pianist and songwriter. “I guess I got into writing for soundtracks because I think of music visually.”

An amble around the couple’s clean-lined, 1960s-modern house offers more visual cues, some which have sonic properties as well. Mounted on a wall by the front door is the trumpet Zapanti took lessons on as a child (he doesn’t play horn anymore), a harmonium on loan from a friend rests on a nearby table, and on a corner of the piano sits a Marxophone, a curious, antique keyed instrument similar to a fretless zither. High on another wall hangs a tuba resurfaced with gold spray paint. “I studied music theory and composition at City College of New York, where the music department had several piano practice rooms that you reserved by the hour,” Zapanti recalls. “For some strange reason, they kept on giving me the same practice room every time I requested one. It had this neglected, old tuba that was pretty rusty. I looked at that tuba for four semesters straight and I got attached to it. So when I graduated, it graduated with me. Every time I start a new composition, I just stare at it for a while and it really helps me focus and gets me in a creative path.” 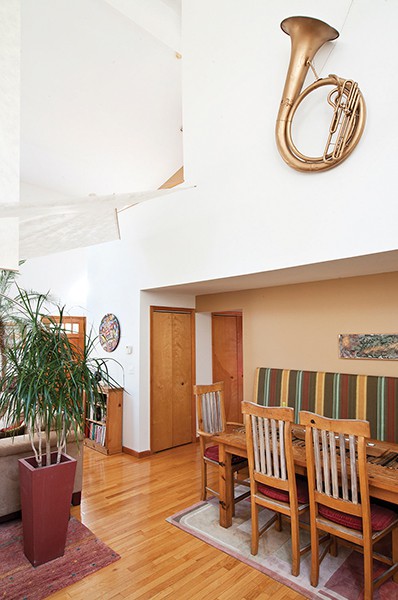 In a larger sense, Zapanti’s creative path essentially began in junior high school, where he played in the school orchestra before moving on to New Wave bands in high school. “I discovered playing music around the same time I discovered girls,” he says, adding, with a laugh, “No surprise, right?” By the time he’d enrolled at City College, however, his goals were loftier than playing keyboards and meeting chicks. “I started to want more complexity [in the music] and this was when I really began listening more to Stravinsky, Schoenberg, and other composers.” Also increasingly on his radar were soundtrack luminaries like Ennio Morricone, Mark Isham, and Zapanti’s fellow Greek, Vangelis, who is best known for the theme to the 1981 epic Chariots of Fire. “From Vangelis, I learned that I didn’t have to go crazy learning to write on paper in order to create music,” he explains. “I could use electronics to make textures and still get a nice, calm classical sound.” One of his classmates was aspiring director Joseph B. Vasquez, who enlisted him to write and record the music for the 1991 comedy Hangin’ with the Homeboys (starring future Rosendale resident John Leguizamo) and the gang drama The Bronx War. Zapanti’s more recent film projects include the 2002 superhero flick Black Cougar and 2004’s Proud, which stars Ossie Davis and tells the true but forgotten story of an African-American naval crew in World War II. (The soundtracks to the latter three films have been compiled for Cinematic Plateau, released this year on Zapanti’s Music of Az label.)

A Temple to the Sun

Although Zapanti and his wife had no plans to give up the Murray Hill apartment they continue to maintain, by 2005 they’d been wooed up to the Woodstock area by its scenic beauty. It didn’t take them long to find the right house. “We were scheduled to see three places and this was the second one we looked at,” Zapanti remembers. “Right away after we’d seen it, we told the realtor we didn’t need to see the third house. We knew this was the one.” 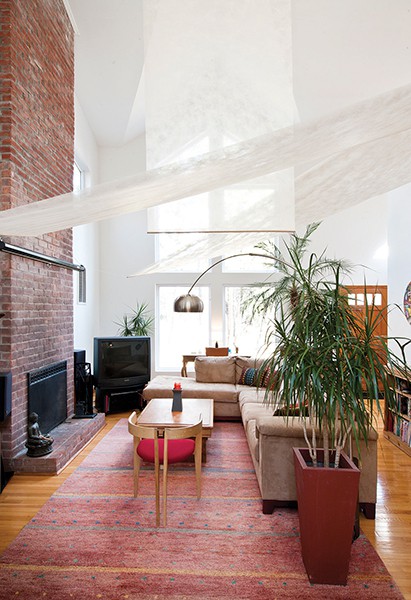 Sitting in the expansive, cathedral-ceilinged central living room, it’s easy to understand why the space-seeking couple were so certain about their choice. With its abundance of wide, high windows and white walls, the airy Bearsville house is a modern temple to the sun, one filled with welcoming warmth and levels of natural light that simply aren’t often found in most of kyscraper-shrouded Manhattan. “I guess you could call us ‘hard-core weekenders,'” muses Zapanti. “This place makes a great escape for us. We have a piano in our New York apartment, too, but I write and develop most of my music here. I just find this spot so inspiring.” 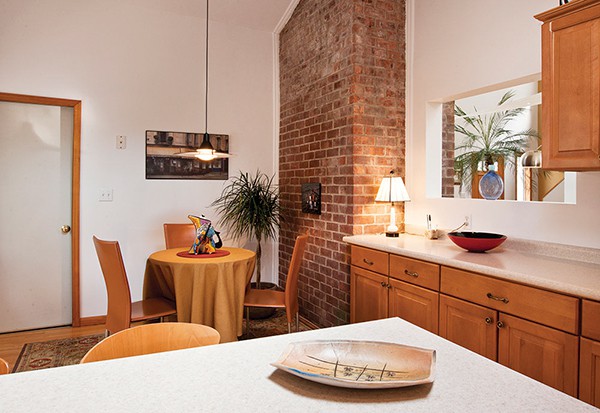 The exposed brick chimney in the kitchen is offset by clean, modern fixtures. – DEBORAH DEGRAFFENREID

Of course, Woodstock and the greater Hudson Valley are well known for the steady cultural offerings and other amenities that also provide escape and inspiration. “We like to go to art openings at the galleries in town, and there’s always so much music to go out and hear,” Zapanti says. “The Bearsville Theater and the summer chamber music series at the Maverick are five minutes away, and concerts at Bard College are just across the river. And we love that there are so many great restaurants around here. The [four-star] Bear Café is just up the road, and we go there all the time.”

The couple sponsors two children through their active membership in the nongovernmental human rights organization Right to Be Free/Africa, which works to liberate and improve the lives of children and women who are victims of human trafficking and forced labor in the notoriously harsh fishing, gold mining, and cocoa farming industries in Ghana. “Some friends of ours in San Francisco had been sponsoring a kid on a monthly basis, which is how we found out about [the program],” says Zapanti, who has written music for Right to Be Free/Africa’s promotional videos. “These kids in Africa are taken from their families and made to work as slaves. We don’t have kids of our own, so being involved as sponsors is something that’s very emotionally and spiritually satisfying for us. It feels like we’re making at least some small difference in the world.” 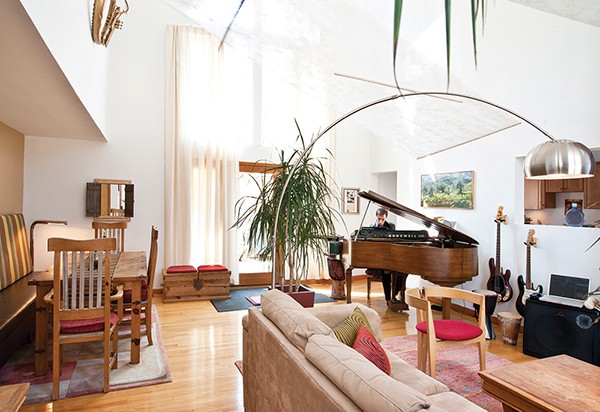 Zapanti creates much of his music in the living room. – DEBORAH DEGRAFFENREID

Zapanti received an ASCAP Gershwin Award for composition and with Captain Beefheart guitarist Gary Lucas created music for the ABC-TV news magazine show “Turning Point.” He recently signed a deal with boutique music placement/licensing firm 4 Score and 7 Music and continues to compose for film and TV—as well as himself. His 2014 CD Reflections Upon (Music of Az) features vocalist Lorelei McBroom, who has performed with Pink Floyd, the Rolling Stones, and Rod Stewart, as well as other guest musicians who have worked with the likes of Miles Davis, Mariah Carey, Michael Jackson, and the Saturday Night Live Band. Currently, he has five pieces completed toward his next album, whose working title is Elysium. 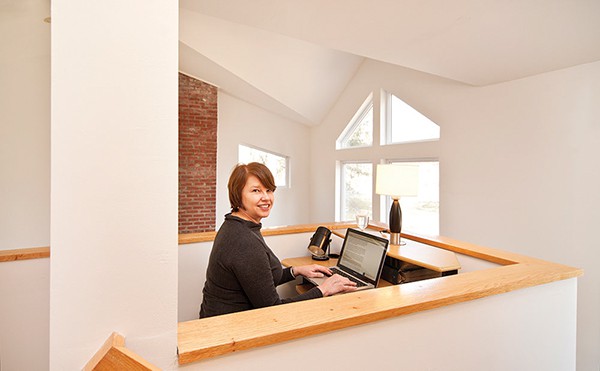 Zapanti’s wife Jeannine. The “crow’s nest” off the top of the staircase serves as an office with a view. – DEBORAH DEGRAFFENREID

“I’m not really comfortable with the idea of performing live these days,” Zapanti says. “I’m too much of a perfectionist, I guess.” Instead of gigging out, he enjoys having friends over for spontaneous jam sessions in the informal atmosphere of his and Jeannine’s upstate home. “When musicians we know come to visit they’re ‘taken prisoner’ to play music here,” he jokes. “The living room has beautiful natural reverb, so it sounds really good in here. And it’s so nice to hang out by the fireplace with friends and just walk over to the piano and start playing whenever I need to release. In this house I just feel like I’m constantly creating.” 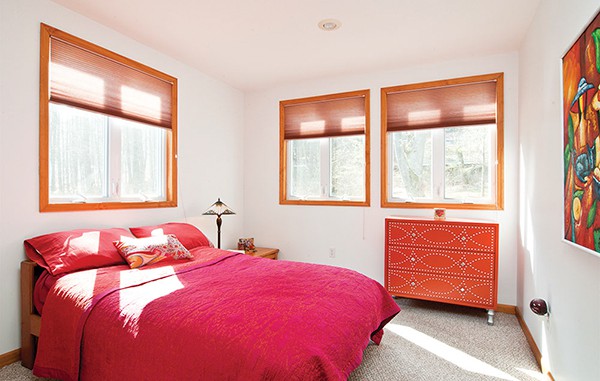